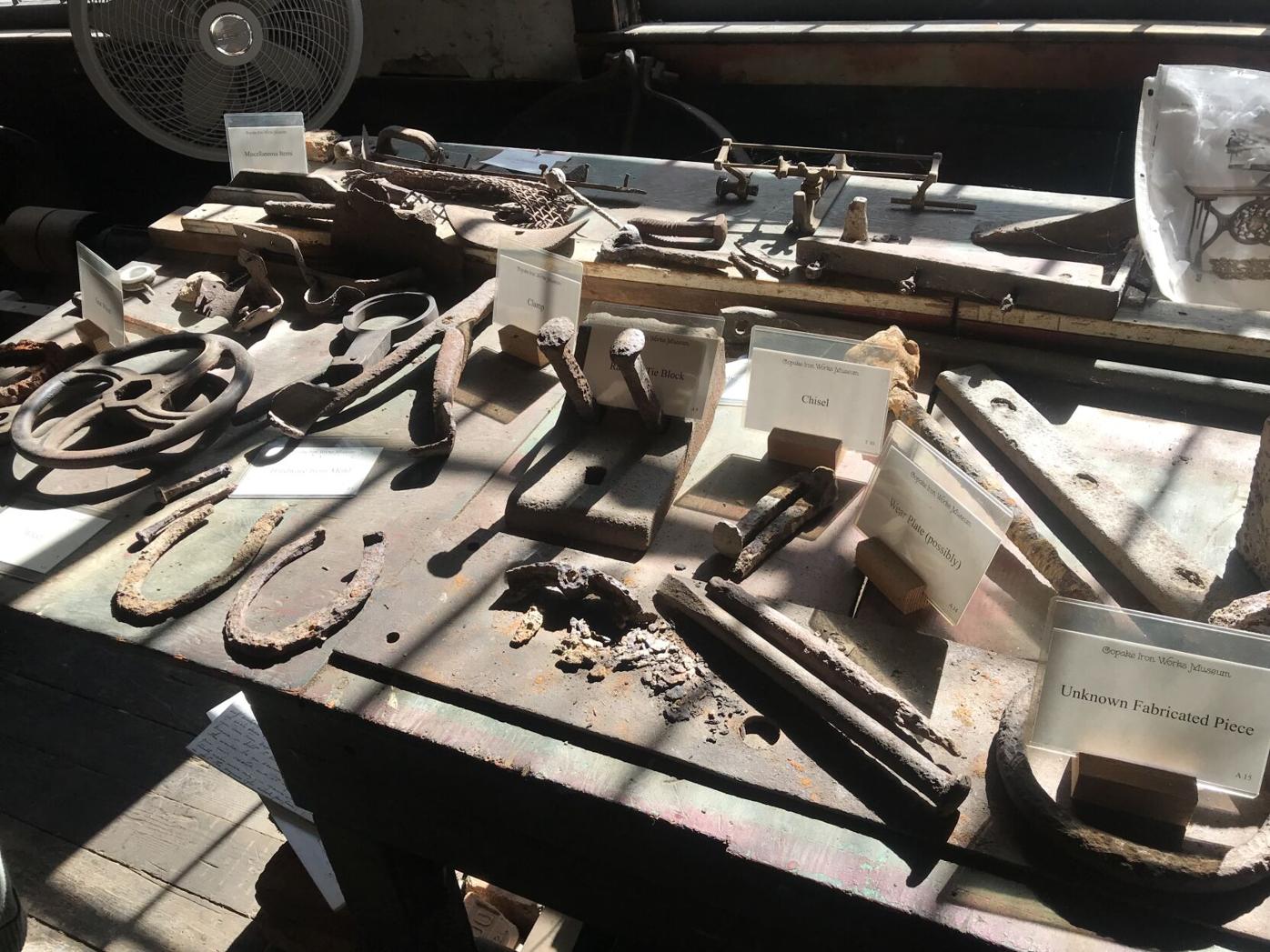 Tools are on display at the Copake Iron Works museum in New York, just a short walk from Bash Bish Falls in Massachusetts. 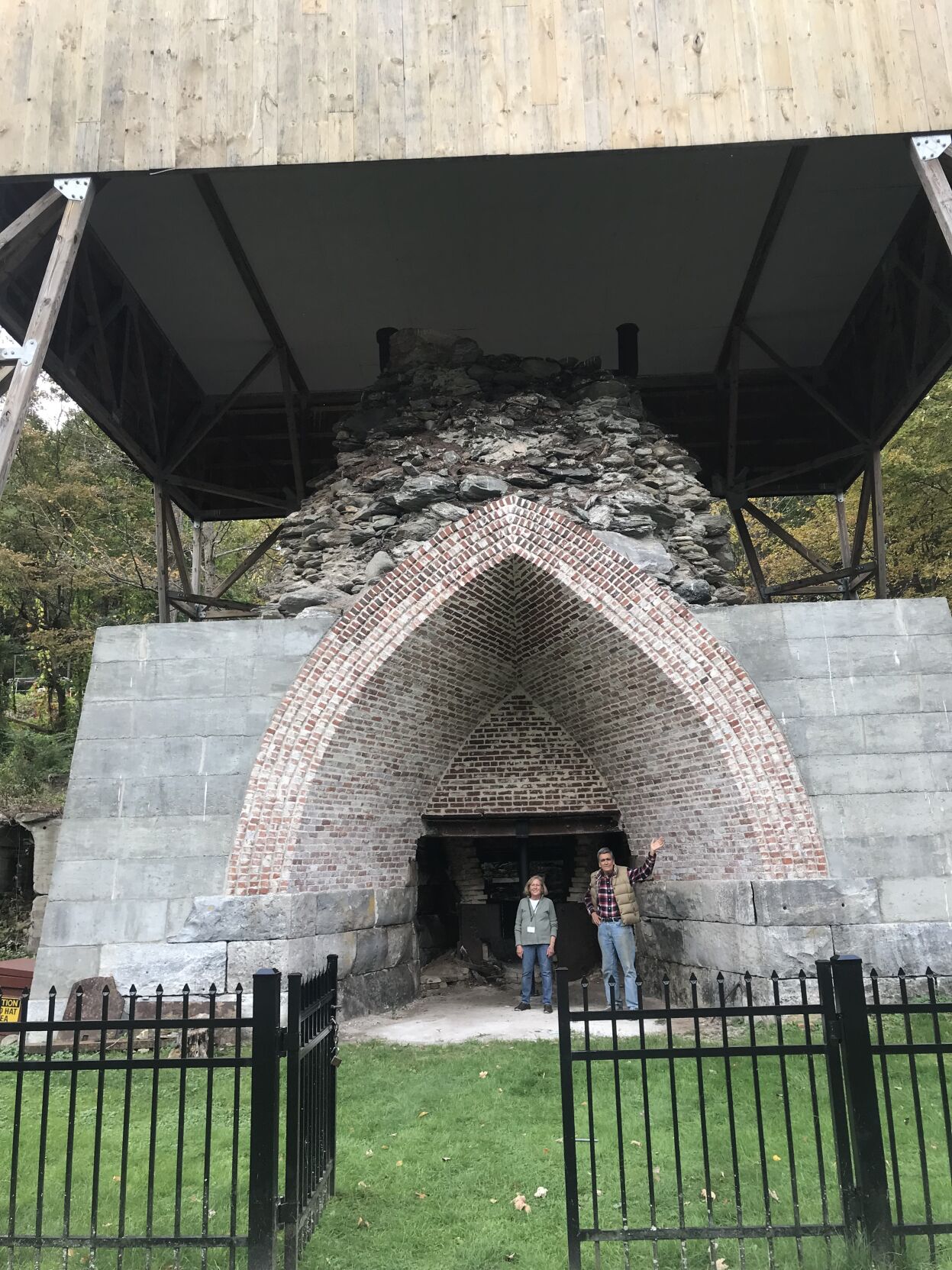 Jim Mackin and Robin Bruce are dwarfed by the 40 foot furnace at the Copake Iron Works National Historic Site in New York.

GHENT, N.Y. — A walk in the woods constitutes sufficient self-improvement for many of us. But for the more ambitious, say those who want to incorporate a history lesson into their hike, I’d like to propose a visit to the Copake Iron Works in Columbia County’s Taconic State Park.

The park covers over 7,000 acres, shares a border with Massachusetts and includes Bash Bish Falls, Massachusetts’s highest waterfall. Unbeknownst to me, until I visited a couple of weeks ago, the park also incorporates the site of a major 19th century iron making operation.

It first fired its monumental furnace in 1845 and ran through the early years of the 20th century until steel, a comparable product at lower cost, largely ran iron out of business.

I’d like to offer a few disclaimers and caveats at this point. I’m not the type of person, unlike historian Jim Mackin, my guide during the visit, who becomes animated when describing how iron ore was mined in a nearby pit, heated to over 2,000 degrees and then turned into iron so excellent that it was used to plate the Monitor, the Civil War ironclad that famously did battle with the South’s Merrimack.

When the opportunity arises to get a guided tour — be it of a museum, a medieval cathedral, or a defunct industrial site — I typically politely demure and head for the nearest cafe.

Also, I’m notoriously bad at understanding how complicated things work and even worse at explaining them to others. Having said that let’s continue.

The first thing that catches your eye upon entering the park and after passing the handsome home where Isaac Chesbrough, one of the operation’s first ironmasters and his family lived, is the furnace itself. If you didn’t know what it was, you might guess it was some sort of prehistoric monument to the gods.

Part of the site’s allure is that it remains surprisingly intact. It includes not just the furnace but also a machine shop, turned into a museum a few years back, with much of the equipment still in place.

“We’re amazed we have so much here that wasn’t melted down for the wars,” said Robin Bruce, a volunteer with the Friends of Taconic State Park, whose grandfather bought one of the ironworker houses in 1921.

The museum is open Saturdays and Sundays for guided tours from two to four p.m. and from Memorial Day through mid-November. The adjoining visitor center is open year-round.

The furnace structure soars over 40 feet into the air, a brick-supported cone of stone below a shed constructed in 2012 to protect it from the elements. Its casting arch, reminiscent of the entrance to a gothic church, enhances the impression that something monumental once happened here.

“More often than not people discover this place by accident,” Robin said. “We tend to get the overflow.”

She meant the overflow of visitors parking their cars or campers on their way to Bash Bish Falls, a mile-and-a-half walk through the woods. Among those who may have traipsed past the iron works were celebrated Hudson River School painters such as Asher B. Durand and John Frederick Kensett, whose paintings of the falls are hallmarks of American 19th Century art.

If they did they probably saw the laborers who kept the furnaces stoked and fed with ore. Jim Mackin said there was only one work-related death recorded “but I think there were a lot of injures. Remember there was no OSHA.”

The work was difficult, starting with the need to raze as much as 600 acres of surrounding woods a year to make the charcoal that, when ignited and blasted with air — the way a bellows supercharges the flames in a fireplace – raised the temperature so high that the ore, transported by train to the top of the furnace and dropped into a charging hole, turned into molten liquid.

The pit where the iron ore came from is these days a spring-fed swimming area 40 feet deep where Robin Bruce said members of the New York State Police scuba dive team train.

A spirited conversation ensued about which of the iron workers’ tasks were the most dangerous. Jim Mackin suspected it was those performed by the mainly immigrant workers that labored in the casting shed, molding the red-hot ore into objects such as rifle barrels. “They had molten iron flowing between their legs,” he said. Mine blasting to access the ore came in a close second.

I’m excited about a train that the Friends of Taconic State Park hope to have running by next summer. Composed of a locomotive, a tender and two carriages, it will run back and forth to the site while offering a traveling history lesson. The train is the approximate size and appearance of the one used to move iron ore around the works in the late 1800’s.

Among those helping to dig the train shed’s foundation as I was leaving the park was Edgar Masters, a founding member of Friends of Taconic State Park. In 1924 his grandparents, Francis and Ella Masters, donated land to New York State that was the first parcel of what was to become the park.

Edgar said they also bought Bash Bish Falls to donate to Massachusetts with the provision that it remain undeveloped public land.

“My grandfather was one of the founding park commissioners,” Mr. Masters told me, briefly laying aside his shovel. “Along with a young gentleman from Hyde Park, Franklin Delano Roosevelt.”

Their ghosts should be pleased by the loyalty and affection the park and the iron works still arouses in their descendants.