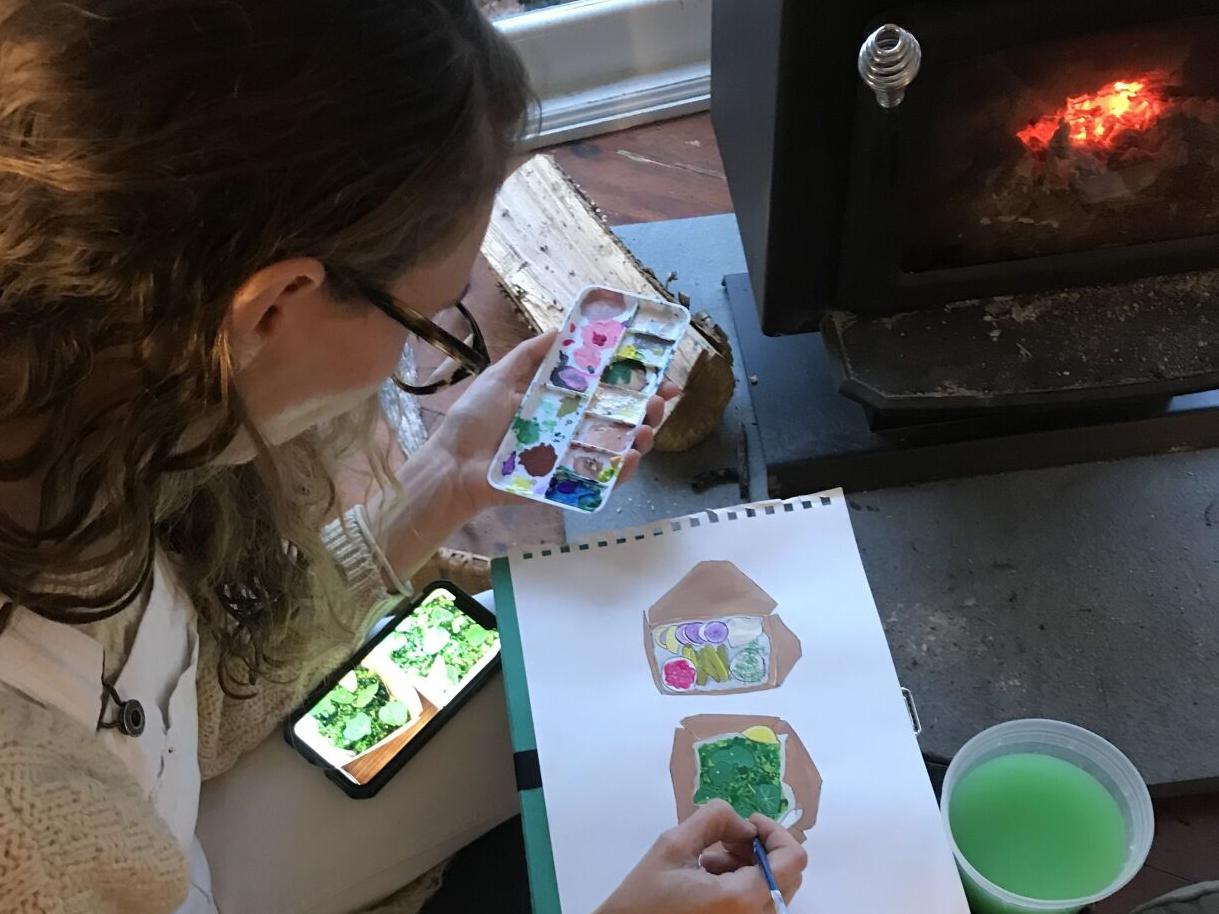 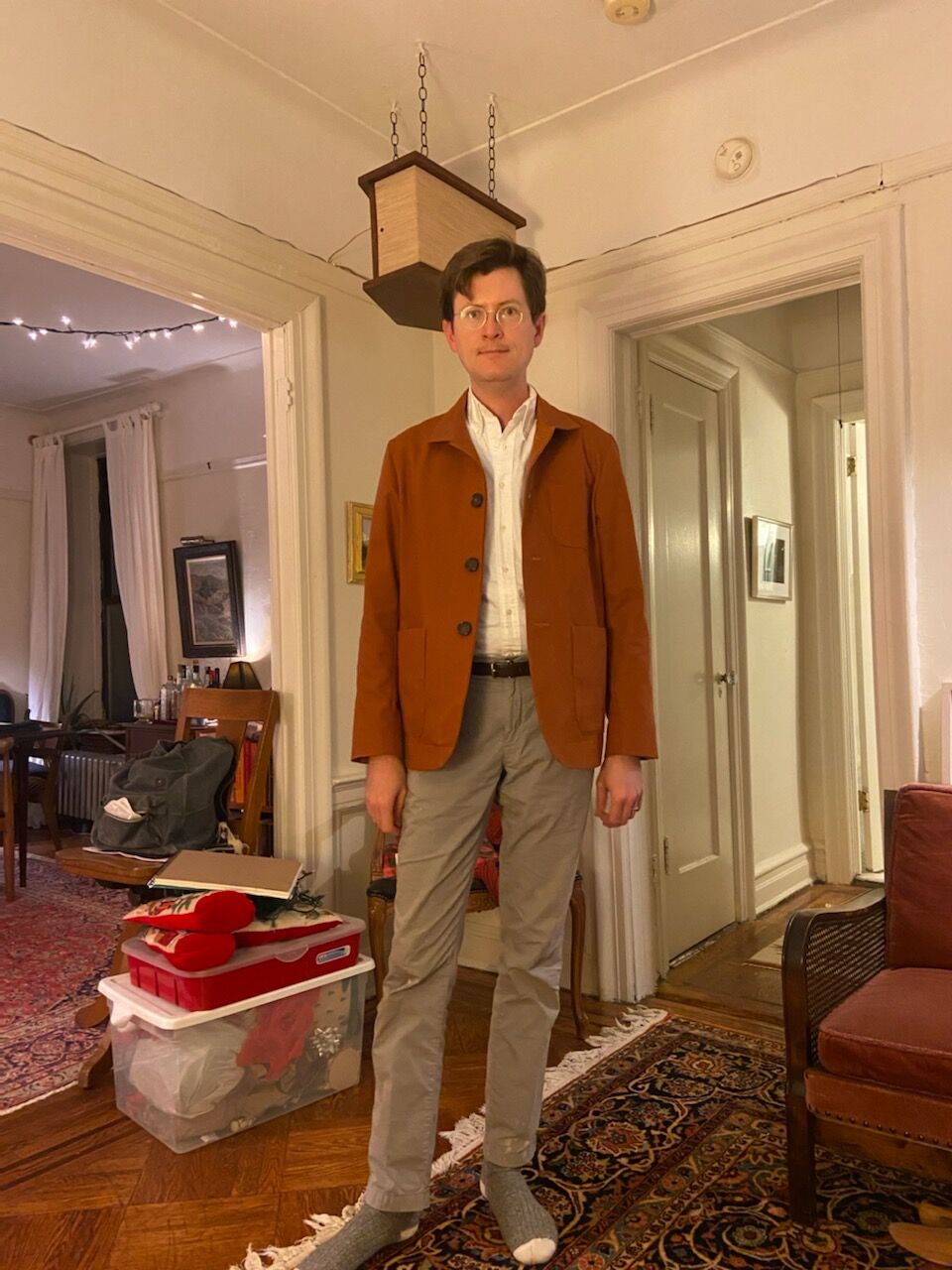 Malcolm shows off his his new jacket, which he created as a holiday DIY project.

GHENT, N.Y. — A few years ago an editor of mine referred to “DIY” in regard to the subject of some story I was writing. I stared at her blankly.

I had no idea what she was talking about. “Do It Yourself,” she explained as she examined me incredulously.

I certainly know what it means now. I see it all over the place. As a matter of fact, our house was a bacchanal of do-it-yourselfers, doing it themselves, over the holidays. It started with my youngest daughter Gracie cooking up a storm for almost every meal.

But I don’t consider her a member of the DIY movement. Yes, it’s a movement, sparking academic research, with associative behaviors that could lead one to identify as a DIY-er. I’m not suggesting there’s anything wrong with doing things for yourself. It’s just that until recently it wasn’t a thing.

In any case, I don’t consider Gracie a do-it-yourselfer because she’s a professional chef. That’s what she does for a living. In my mind someone that answers to the DIY description has a day job distinctly different from his or her DIY persona. That would be my daughter Lucy and her husband, Malcolm.

There are several secrets to a successful marriage. One of them is shared values. A close second is shared interests. And Lucy and Malcolm share an interest in making things. Off-duty Gracie, on the other hand, would prefer to read or write or do yoga.

Writing or doing yoga doesn’t quality as DIY. By the way, I’m not an expert on the subject; I’m sure there are others that would proudly cop to that description.

My wife and daughters are mesmerized by one of them. Her name is Rudy Jude and she goes about her day in Maine designing and making fabulous plant-dyed clothes for herself and her adorable children while simultaneously raising them with excellent values, the whole process documented on Instagram. Rudy Jude accomplishes more with her hands over an eight-hour period than I have my entire life.

Writing, about the only thing I do that could be described as tactile and tangentially productive, doesn’t satisfy the conceit of a do-it-yourself activity because it doesn’t result in a useful physical object that you could have bought but decided to make. At least that’s my definition.

A prime example is the jacket Malcolm made for himself over the Christmas break. You heard that right. My son-in-law spent much of his vacation — he’s an eighth grade teacher in real life — sequestered in the dining room manufacturing a wearable garment with pockets. He employed a scissors and sewing machine while consulting a large instruction sheet with information about pattern pieces, measurements, and edge stitching.

Edge stitching? I can’t even sew, though I realize my life would be sweeter if I could. My wife resents me whenever I plead with her, typically unsuccessfully, to sew the holes in my sweater. She’s got far better things to do. Over the holidays she knit a lovely sweater/cap set for the family’s newest arrival, a niece’s daughter named Nellie. When Debbie wasn’t doing that she was baking cookies or making festive red and white Christmas tree ornaments in the shape of horses from sculpey.

Yet I don’t consider my wife a do-it-yourselfer because she’s a baby boomer. I associate DIY, perhaps unfairly, with millennials. The difference is that when my generation makes something it’s no big deal. When my children’s generation does it’s a form of identity. They would probably beg to differ and did when I questioned them about what motivated their industriousness?

If Malcolm had said, “I’m using this jacket as an excuse to avoid hanging out with you in the living room,” I’d have understood completely. I’m not the most entertaining companion. I prefer to be left alone to doom scroll the latest news on election subversion by the fireplace while sipping an excellent single malt.

But Malcolm reasonably explained that what inspired him was the $350 price tag of a Drake’s jacket he saw online. “I love a project and I’ve been on a sewing kick lately,” he explained, looking up from his labors. “It’s good to work with your hands.”

Among other recent projects has been a bimini for his sailboat. That’s the canvas top that shields the cockpit from the sun. He also made Gracie for Christmas an extremely handsome brown canvas tote to carry logs. It came with sturdy matching leather handles. His first successful effort at haberdashery was a bucket hat akin to the one Gilligan wore on his island.

“I spend so much time looking at a screen,” he went on. “It’s fun just to let your thoughts go.”

If you detect a touch of envy amid my admiration it’s only because I’m terrible with my hands. I can’t make anything. On the rare occasions when I manage successfully to assemble something from the accompanying directions it’s as much a triumph of the will as the intellect.

There’s a developmental psychologist at Harvard named Howard Gardner, no relation. Gardner posits that there isn’t one or even two but multiple forms of intelligence. I’m not sure how much I buy his theory. It feels like an excuse for those of us deficient in the traditional verbal and math arenas to focus on something we might excel at, sports for example, and celebrate that as a form of intelligence.

Gardner describes one of the intelligences as bodily kinesthetic, the ability to handle objects skillfully. Another is visual-spatial. And a third is logical-mathematical. Excuse my English, but I suck at all three. If I attempted to make Malcolm’s jacket and wore it in public it might well trigger stand-your-ground laws in certain states.

Malcolm also credited his motivation to Lucy. She was in the next room painting lovely watercolor illustrations for a cookbook proposal Gracie is writing. Lucy took gentle exception at my efforts to fit her and her generation in a neat DIY box.

“We’re more hobbyists,” she observed. “There’s more to life than just your job.” If you work in social media, as she does, you’re loath to let that define you.