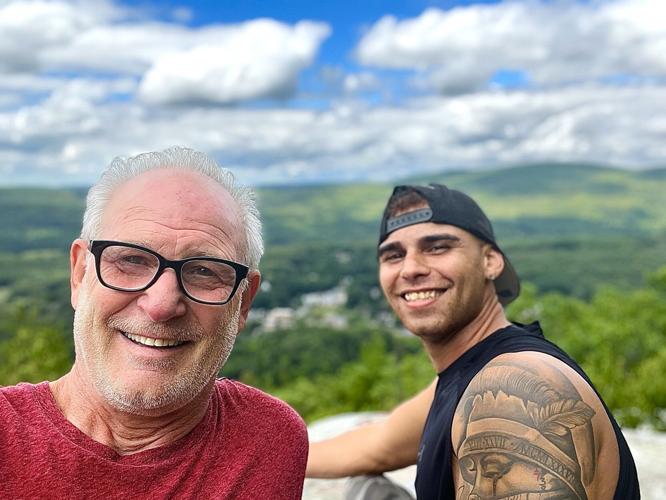 Eagle columnist Richard Reiss, left, poses with his son after a family hike to the top of Monument Mountain. 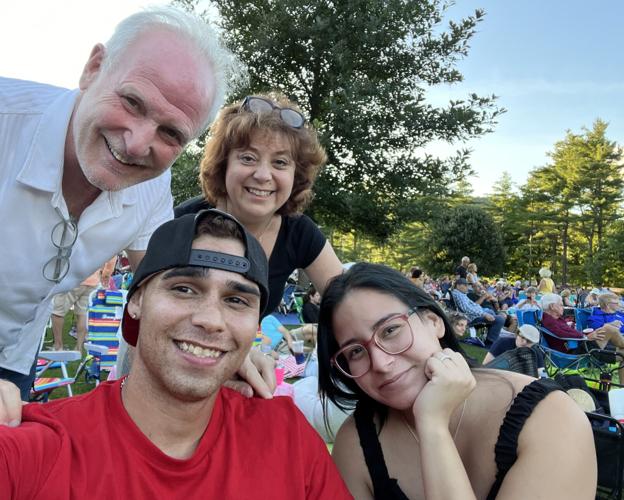 Eagle columnist Richard Reiss, top left, poses with his wife Paula, son Gabriel and Gabriel's girlfriend Angie after they secured their lawn seats at Tanglewood, where they went to see a concert as part of the "quintessential Berkshire experience while Gabriel and Angie were visiting from Florida for Gabriel's birthday.

Richard Reiss is the author of “Desperate Love: A Father’s Memoir.” He lives in Canaan, N.Y., with his wife Paula.

The boy is my eldest son, Gabriel. He’s a construction worker in Florida, where he has lived for nearly two years. Much of his life has been fraught with emotional turmoil leading to drug and alcohol abuse. Today, he is clean, he is in love and doing the best he can to manage a complicated world.

He loves the Berkshires and for the second year in a row spent his summer vacation (and his 32nd birthday) with his mother and father. We picked him up at the airport with his new girlfriend, Angie. She is lovely. Originally from Colombia, she has a soft accent and a sweet welcoming smile. We’re just getting to know her, but she seems like a good fit.

When we arrive home, Gabriel’s two brothers and new sister-in-law are waiting for him. It’s dinner time and in honor of the birthday boy we order take-out Chinese, which is his favorite. We pick up the food but realize too late that the restaurant has made a mistake. Several items, including Gabriel’s favorites, are missing.

Gabriel is upset. He is angry and cursing and doing what he has done all his life, turning something minor into something major. Tension rises around the dinner table. A few of us make light of the missing food, but Gabriel looks like he will explode.

Eventually, he gets up and leaves the table. We eat. He returns. He’s OK. The tension abates. Everyone breathes. Everyone knows what could have happened.

The following day is his birthday. Aunts and uncles and cousins arrive for the day. Happiness abounds and I forget what it took to get him to Florida and into rehab yet again. Nothing is easy, and I have no illusions that our week with Gabriel and Angie will be as wonderful as these few hours with the people we love the most in the world.

Two days pass and little things annoy me. Smoking, cursing and arrogance are the front-runners. But he is smart — really smart. He does Wordle with my wife and helps her with crossword puzzles. And he fixes a couple of broken doorknobs. And he is chatty and fun and dotes on Angie. It’s nice to have him home. It’s wonderful to see him happy.

A package arrived in the mail. It’s a small box and I needed a knife open it. I asked Gabriel to get me a knife from the kitchen, but instead of going to the knife drawer he reached into his pocket. “Why do you have a knife?” I asked. Defiantly, he responded. “I always carry a knife.”

I buried the knife like I bury so many things about my son that I wish I didn’t know. I need to be more like him and live in the present, but there are remnants. The knife is a remnant.

The following day, I said to Angie, “Let’s go to Tanglewood. It’s the quintessential Berkshire experience. We have to do it.” Angie is easy. She knows as much about Tanglewood as I know about nuclear physics. I said, “Earth, Wind and Fire is playing. It’ll be fun.” Gabriel chimed in. “Aren’t they dead by now?”

Among the thousands of patrons at Tanglewood, we are nearly invisible. That’s a good thing because crowds make Gabriel anxious, and he is angry that he can’t find a place to smoke. It takes a while, but like before, he calms down. The band begins, and Gabriel and Angie sleep though the first half of the show. Perfect. When they awake, they are both happy and enjoying the few hits they recognize.

The next day is for hiking. Gabriel is excited. Angie is, too. He loves the outdoors, and it’s a perfect day to walk along a verdant trail. We hike the west side of Monument Mountain that begins in Housatonic. The air is crisp, and the pace is quick. We pass massive rocks that have been in place for millions of years. We climb a few and recall other hikes we have taken in Arizona and Scotland. Gabriel is in his element. He loves the woods. It’s a wonderful morning and things are looking up. When we reach the summit, we are elated, taking in the magnificent view of the valley below and the mountains that line the horizon.

One more day to go. In the afternoon, we head to the Massachusetts Museum of Contemporary Art in North Adams. It is Gabriel’s favorite museum. Like Gabriel, Mass MOCA is complicated. Its art is big and bold and challenges us to think differently about the world. If Gabriel were a museum, he would be this one.

We are viewing a piece of art that represents how immigrants came to the United States. It’s a long stretch of wooden planks that looks like a dock on any lake or pond in The Berkshires. At the end of the dock are three large ceramic vessels. I turned to Angie and said, “These objects represent how immigrants came to America.” Without missing a beat, she said, “Really? I came on Jet Blue.”

In the evening, we attended the musical “Next to Normal” at the Mac-Haydn Theatre in Chatham, N.Y. It’s the story of a nuclear family. The mother is bipolar. The daughter is developing a serious drug habit. The brother is an 18-year-old ghost who died when he was 8 months old. And the father, who seems to be managing, is, in truth, barely hanging on by a thread. That’s a lot of sadness for one show, and more than once I could see Gabriel rubbing his eyes. So was I. Neither one of us is as tough as we think we are.

His job is good, but he wants more. He wants to build and create and manage property, and he believes he is in a place to make all of that happen. I believe it, too.

Richard Reiss is the author of “Desperate Love: A Father’s Memoir.” He lives in Canaan, N.Y., with his wife Paula. Richard Reiss can be reached at rpreiss63@gmail.com.