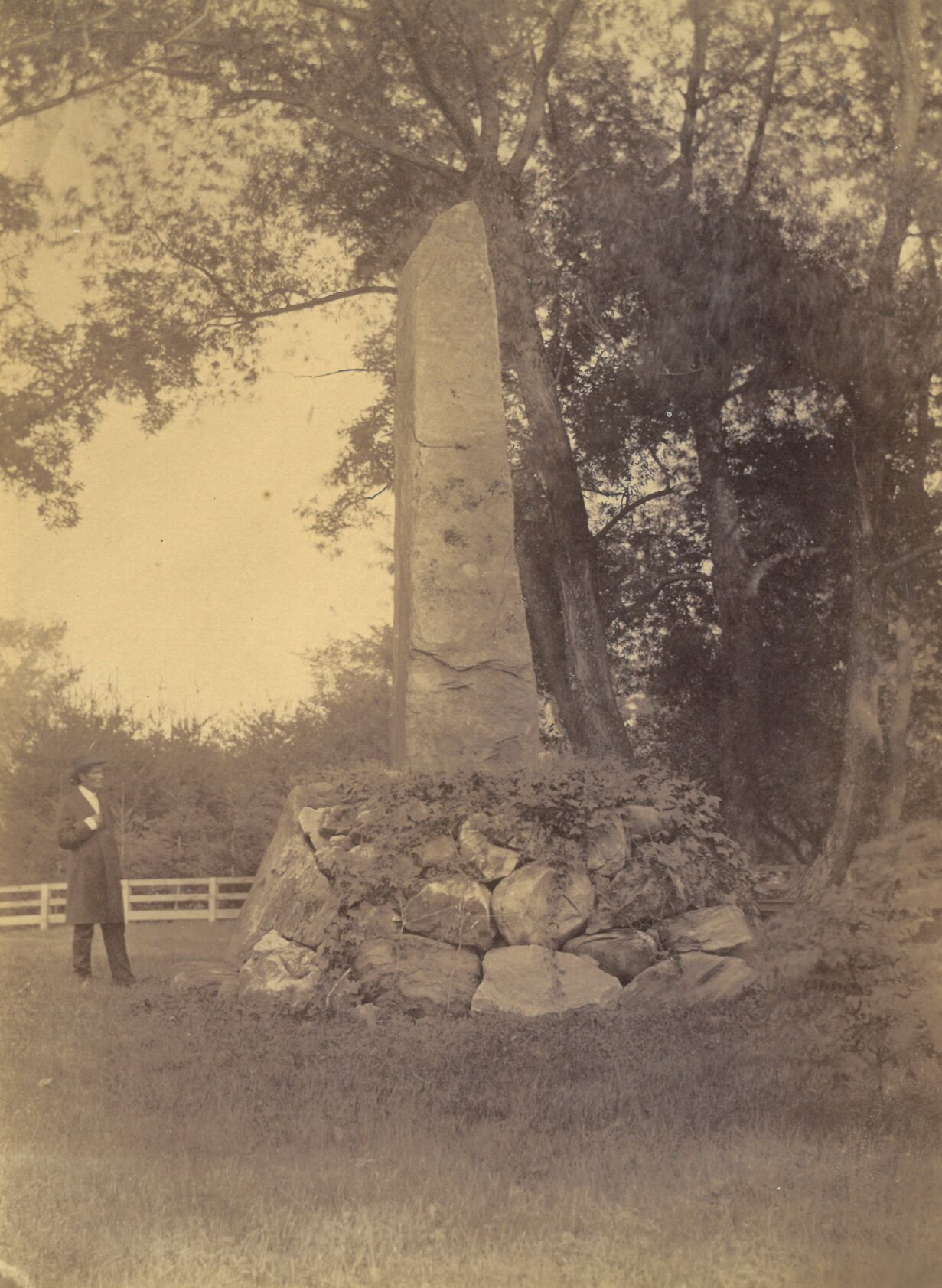 The Rev. Jeremiah Slingerland, a Stockbridge Mohican, stands at the Indian Burying Ground in Stockbridge in 1879, when he came to Stockbridge to speak at the Laurel Hill Association’s annual meeting. The Stockbridge-Munsee Community Band of the Mohicans use a recurring theme: “We have always returned.” 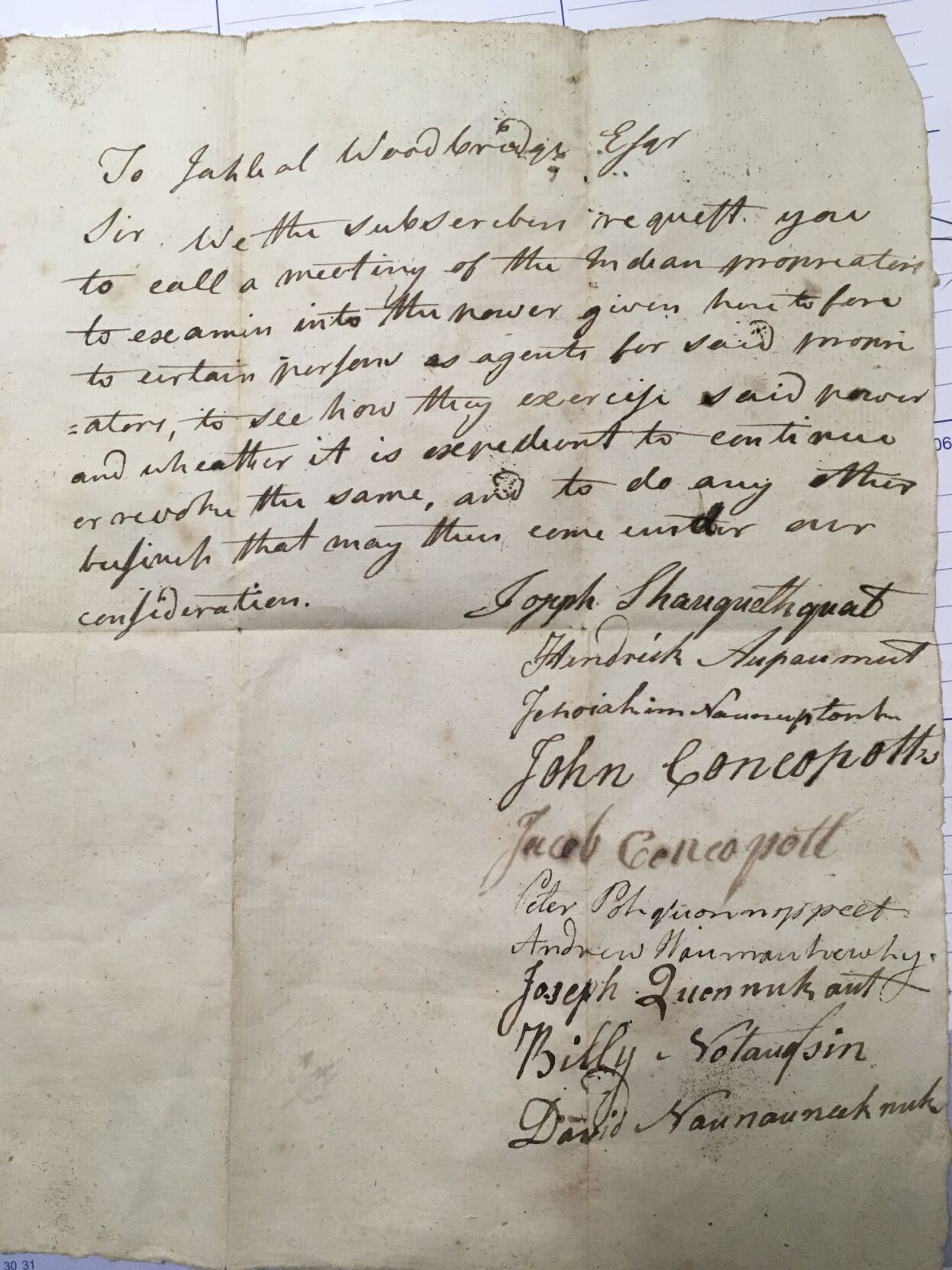 A 1740 letter from Stockbridge Indian proprietors to Jahleel Woodbridge is signed by the 10 sachems, or chiefs, who are direct ancestors of living members in the Mohican tribal nation.

The Rev. Jeremiah Slingerland, a Stockbridge Mohican, stands at the Indian Burying Ground in Stockbridge in 1879, when he came to Stockbridge to speak at the Laurel Hill Association’s annual meeting. The Stockbridge-Munsee Community Band of the Mohicans use a recurring theme: “We have always returned.”

A 1740 letter from Stockbridge Indian proprietors to Jahleel Woodbridge is signed by the 10 sachems, or chiefs, who are direct ancestors of living members in the Mohican tribal nation.

At the June 12 annual town meeting, Stockbridge residents will be asked to vote on the final resting place for three Stockbridge Mohican Proprietorship documents, two of which were recently rescued from the “Old Town Hall” by Chris Marsden.

Although the Town Clerk’s Office and the Stockbridge Library Museum & Archives both harbor a number of primary-source documents relating to the Stockbridge Mohican mission, the Stockbridge-Munsee Community Band of the Mohicans in Wisconsin do not possess a single document from their time in Stockbridge during the years 1737 to 1790. Hopefully the following narrative will help to provide a historical context for the documents.

On May 7, 1737, Jonathan Belcher, the colonial governor of the Province of the Massachusetts Bay in New England, issued a charter for Indian Town on behalf of King George II, which was not to exceed six miles square (36 square miles or 23,040 acres), encompassing land that is now the towns of Stockbridge and West Stockbridge. One-sixtieth of Indian Town, or 384 acres, was to be given to the Rev. John Sergeant, a missionary; 1/60 to Timothy Woodbridge, the school master; and 1/60 to each of the four English families allowed to settle there, who were chosen to provide a Christian example for the Mohican families.

During the 18th century in Massachusetts, proprietorships were a common method for creating townships in the Berkshires. Those townships were created when members of the Stockbridge Mohican tribe sold a tract of land to English colonists. The English colonizers in turn, after becoming proprietors of that plantation (unimproved land), would sell smaller tracts of land to individuals who wanted to live on the land. Indian Town was unique in that the tribe was granted their plantation by Royal Charter and as such a proprietorship was not needed.

However, not long after Indian Town was incorporated into the town of Stockbridge English colonists began to obtain land through questionably legal transactions or outright theft, causing the sachems of the tribe to petition the Great and General Court of the Province for help. By June of 1750, the provincial government created an Indian Proprietorship with the hope of protecting the Stockbridge Mohicans from further dispossession of their land. Although proprietorships were subject to provincial and later Massachusetts state law, they were distinct entities and not a part of town government.

On April 25th, 1774, just weeks prior to his death, Woodbridge presided over his last Mohican Proprietorship meeting at William Goodrich’s inn. By a vote of the tribal sachems, Timothy Woodbridge’s son Enoch Woodbridge was chosen as clerk of the Indian Proprietorship. William Goodrich and Samuel Brown Jr. were chosen to take care of the tribal “out lands” — that is, land not yet distributed by the proprietorship. That turned out to be only the first step in a move to control the land transfers from Mohican to English ownership.

The Stockbridge Mohicans trusted Timothy Woodbridge enough that they referred to him by the honorific “Father” in one of their petitions to the colonial government. The sachems’ relationship with Timothy Woodbridge may have caused them to believe that his son Enoch would be cut from the same cloth. Unfortunately, that was not the case, as by May 30 Enoch Woodbridge and Brown were able to convince the proprietors to cede control of the daily business of the proprietorship and accept by vote the following language taken from the Indian Proprietor’s Records: “The Proprietors met according to adjournment and voted, chose, Constituted and appointed Samuel Brown Junr. Esq. Mr. Enoch Woodbridge Agents & Attorneys for said Proprietors.” The next two pages were filled with legalese, but the essence of the language enabled Enoch and Samuel to gain complete control of the distribution of land.

Likely the sachems quickly learned that Enoch Woodbridge and Brown were only concerned about acquiring land for themselves and other English colonists, and yet it took six long years to undo their agreement. Following the legal requirements of the newly minted commonwealth of Massachusetts, they posted the following notice: A “Proprietors Meeting was called on Monday the 20th Day of March 1780 at the house of Hendrick Ampaumut for the following Purposes (viz.) First To Chuse a Moderator for said Meeting 2ly To see if the Proprietors will chuse a New Clerk and Proceeded to pass the following Votes (viz.) First Voted and chose Jahleel Woodbridge Moderator. 6ly Voted and Chose Jahleel Woodbridge Esq. Clerk and he was sworn according to law.”

That six years passed before the Indian proprietors were able to untangle themselves from their arrangement with Enoch Woodbridge and Samuel Brown probably speaks to their inability to find someone they could trust and who would be willing to help undo that agreement. Enoch’s cousin Jahleel Woodbridge seemed to fit that need. Not long after the tribal sachems chose Jahleel as clerk in 1780, following legal protocol, they requested a meeting of the proprietors by writing a letter to the clerk. That short letter, which follows, is one of the three documents that Stockbridge residents will vote on at the Annual Town Meeting:

Sir. We the subscribers request you call a meeting of the Indian Proprietors to examine into the power given here to fore to certain persons as agents for said proprietors, to see how they exercise said power and whether it is expedient to continue or revoke the same, and to do any other business that may thus come under our consideration. Joseph Shauquethquat, Hendrick Aupaumut, Jehoiakim Naunuptonk, John Concopott (Konkapot), Jacob Concopott (Konkapot), Peter Pohqunnoppeet, Andrew Waumauhewhy, Joseph Quennukaut, Billy Notuaqssin, David Naunauneeknuk.”

By 1780, the Mohicans were largely dispossessed of their land in Stockbridge and West Stockbridge, and by 1783, they began their journey west into New York State to land given to them by the Oneida, walking some 160 miles to New Stockbridge, N.Y.

Today, the Stockbridge-Munsee Community Band of the Mohicans, in their ever-diplomatic way, represent their journey to a new home in Wisconsin using a “many trails” symbol. However, not unlike other tribes, it was in reality a trail of tears. They are a thriving community with a deep interest in the history of their homeland, many of whom are direct descendants of the sachems who signed the above letter.

I would strongly urge Stockbridge voters to support the return of these documents to the Stockbridge-Munsee Band of Mohican Indians.

Rick Wilcox is a local historian who specializes in the history of the Stockbridge-Munsee Community.

The Checkup for April 12: State aims for 2 million fully vaccinated residents by next week

The Checkup for April 11: Casino finds patrons not taking the bet