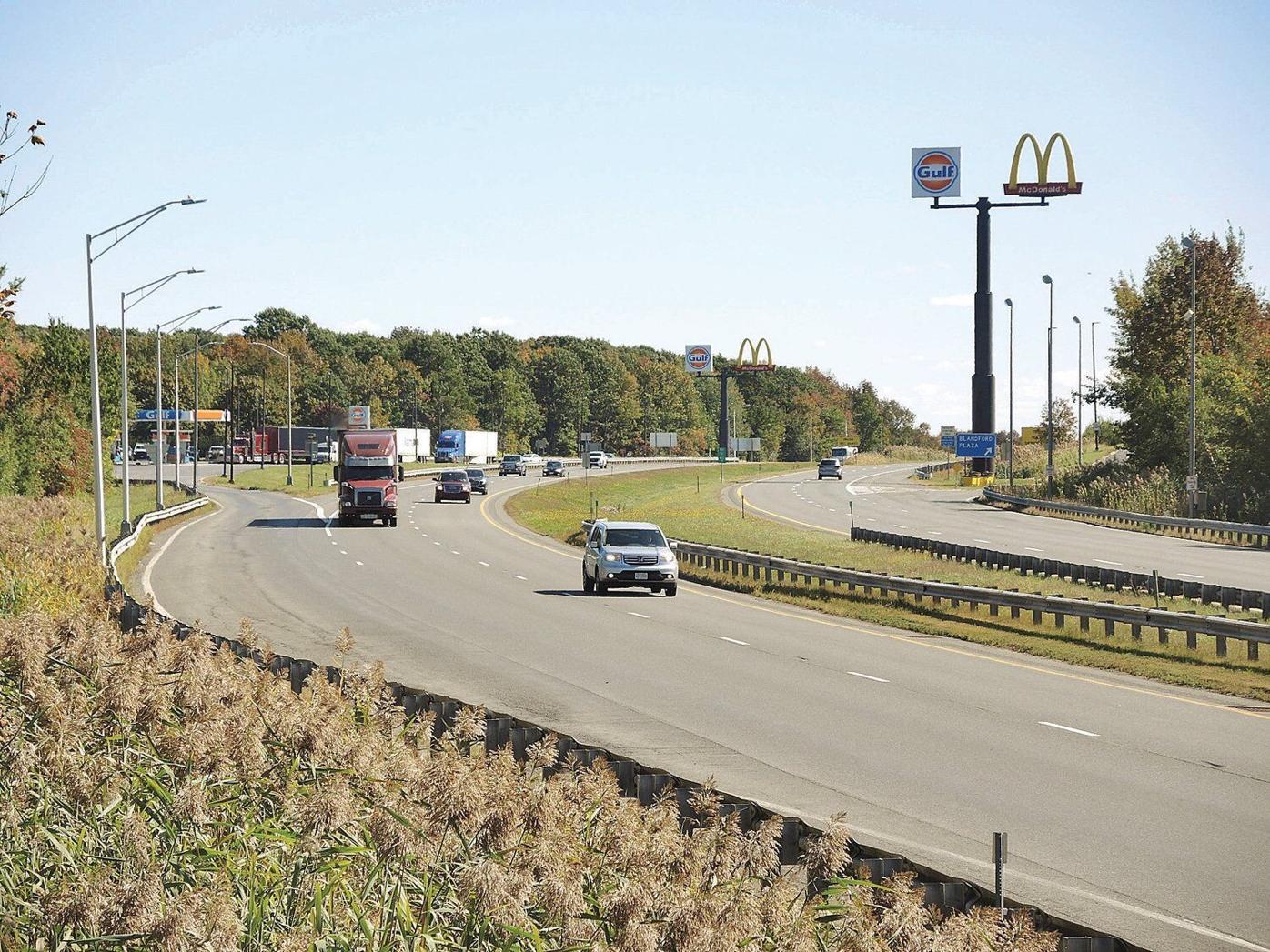 A view east of the Mass Pike from North Street in Blandford. The Blandford Service Plaza is a finalist for the location a new Pike interchange. 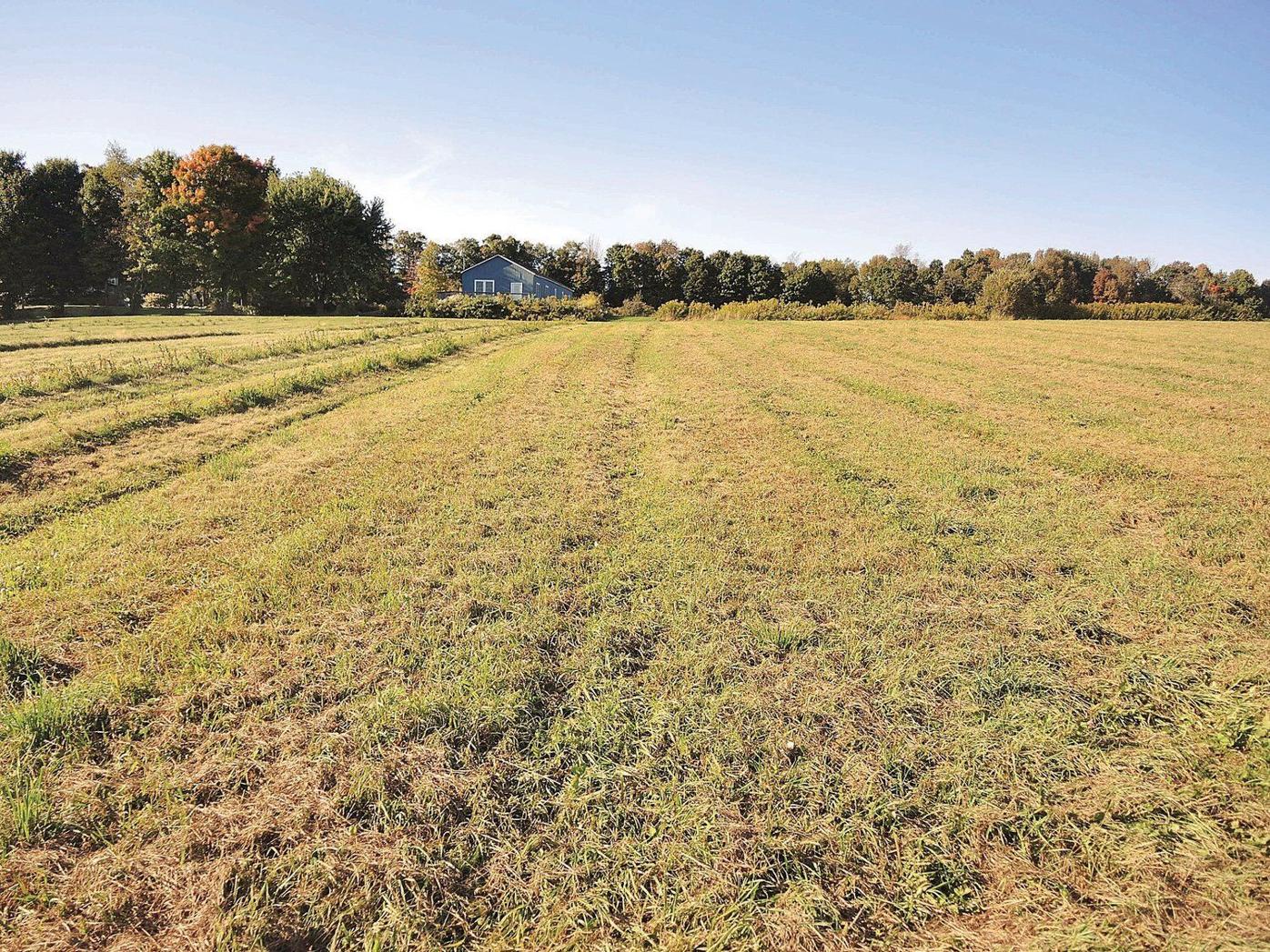 A new westbound ramp at the Blandford Service Plaza would be constructed across North Street from this former blueberry farm. 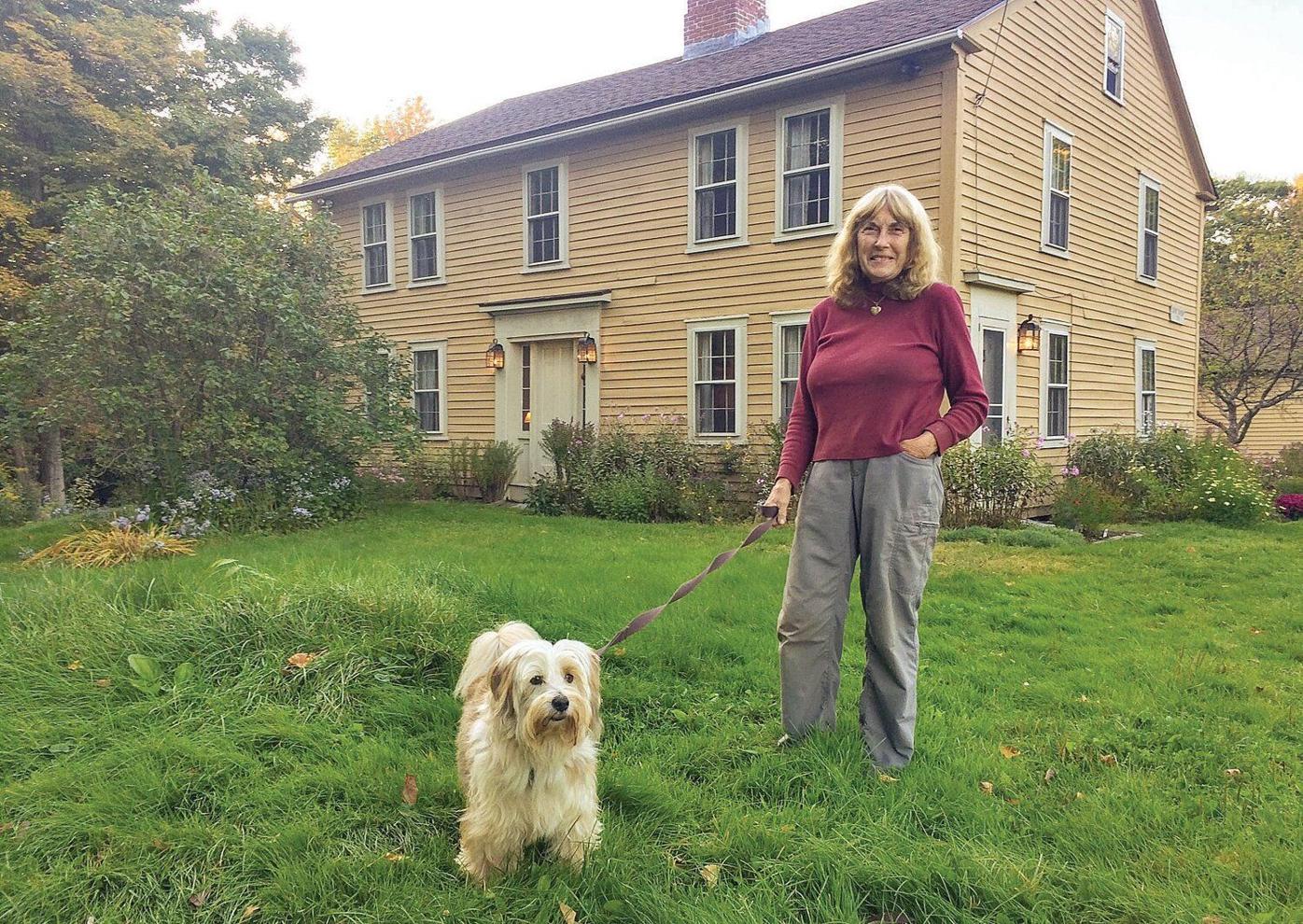 Carolyn Taylor and her Tibetan terrier, Clark, outside the former Baird Tavern in Blandford, which Taylor has owned since 1971. 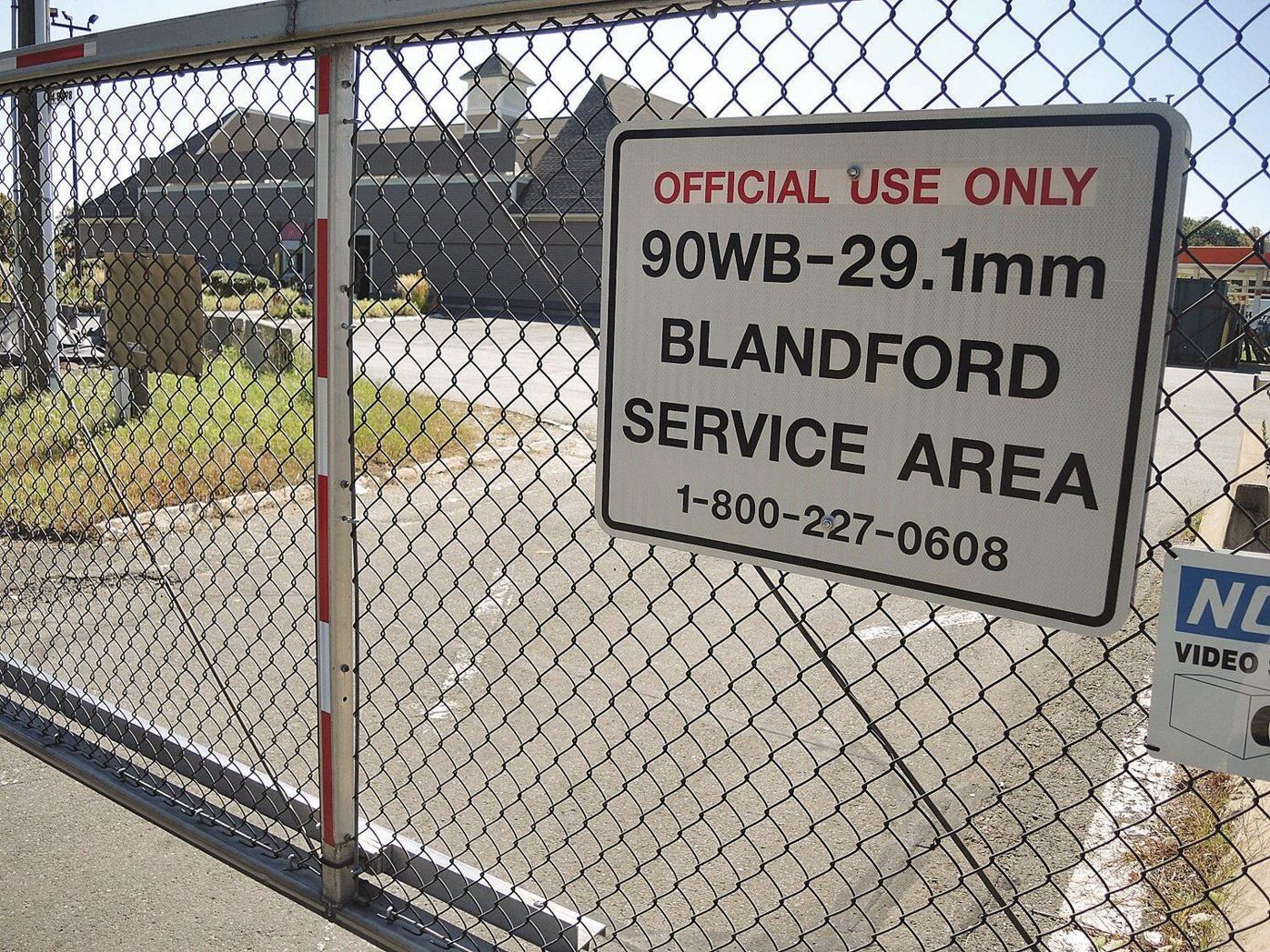 Westbound traffic coming off a new interchange of the Massachusetts Turnpike would travel close to this access point used by workers at the Blandford Service Plaza. The route would use the same service road to head west to a ramp at North Street. 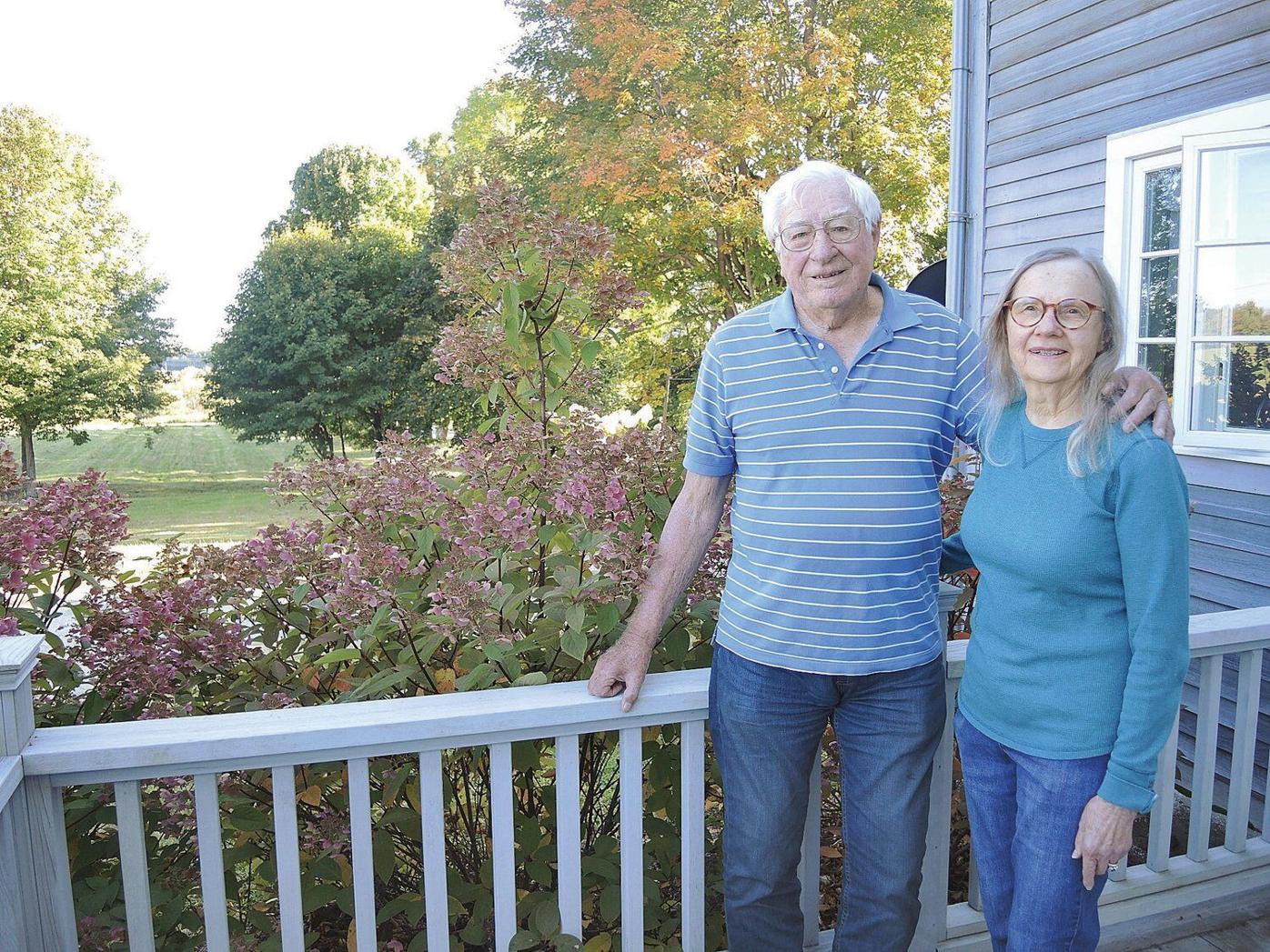 Bill Missimer and Jane Pinsley, of Blandford, who live on a 200-acre former blueberry farm, oppose construction of a Pike interchange near their property.

A view east of the Mass Pike from North Street in Blandford. The Blandford Service Plaza is a finalist for the location a new Pike interchange.

A new westbound ramp at the Blandford Service Plaza would be constructed across North Street from this former blueberry farm.

Carolyn Taylor and her Tibetan terrier, Clark, outside the former Baird Tavern in Blandford, which Taylor has owned since 1971.

Westbound traffic coming off a new interchange of the Massachusetts Turnpike would travel close to this access point used by workers at the Blandford Service Plaza. The route would use the same service road to head west to a ramp at North Street.

Bill Missimer and Jane Pinsley, of Blandford, who live on a 200-acre former blueberry farm, oppose construction of a Pike interchange near their property.

BLANDFORD — The year 1768 sparked frequent protests in Massachusetts, as the British government pressed taxes on colonists edging toward rebellion.

That spirit carries on inside two homes that rose at that same time in Blandford in the eastern Berkshires. Today, the grievance centers on a proposed Mass Pike interchange some feel threatens rural landscapes and customs rooted in the 1700s.

It was 1768 when James Baird erected the center-chimney colonial he ran as a tavern on an earlier thoroughfare: the Boston-Albany turnpike. That year, British customs officials seized statesman John Hancock's ship, believing he was concealing goods. Samuel Adams wrote a screed against new taxes on the importation of paper, paint, lead, glass and tea.

Since 1971, the Baird Tavern at 2 Old Chester Road has been owned by Carolyn Taylor and for a spell continued to lodge travelers as a bed-and-breakfast.

But today, the only ones trodding its wide-board floors are members of Taylor's family — and her pets, including a hearing-impaired Tibetan terrier, Clark.

The home sits near the state Department of Transportation's Blandford Maintenance Facility, one of three proposed locations for a new Pike interchange. A group commissioned by the state Legislature is scheduled to reveal final site candidates at a 3 p.m. meeting Wednesday at the department's Lenox office. A third possible interchange site on Algerie Road in Otis is expected to be eliminated, leaving just the maintenance facility and the Blandford Service Plaza as sites.

The DOT's current design shows an eastbound Pike off-ramp missing Taylor's house but ending on Old Chester Road just yards from her property. Travelers would use that same point get on a new eastbound ramp. The project would require four land-takings and cost $29.5 million, according to DOT documents.

Taylor's home appears to be spared in current planning, though the tiny crossroads outside her front door would share in handling 6,400 new daily trips using that interchange.

"I can't imagine anyone would be cruel enough to knock down a 250-year-old house," said Taylor, sitting beside one of three fireplaces that back onto that center chimney.

"I try not to stress about it too much," she said. "They've talked about it for years. But now it's getting to be more than idle speculation. I would be one of the protesters throwing myself in front of the bulldozer."

A few miles east, in the home once owned by a renowned blueberry grower, that spirit of revolt simmers near another fireplace equipped with iron racks for colonial cooking.

This home at 44 North St., built in 1769, stands a stone's throw from the place where traffic would funnel onto a westbound ramp.

Its occupants, Jane Pinsley and Bill Missimer, asked the Blandford Select Board this month to stand against the proposed interchanges.

"If you throw away your history, if you don't know where you've come from, you don't have a path," Pinsley said in an interview in the living room at her home, which she and Missimer restored. It sits at the western edge of the 200-acre farm long run by her late father, Joseph "Blueberry Joe" Kuznicki.

"The small town — I think it's a culture that when lost cannot be replaced," Pinsley said.

The Select Board declined to oppose an interchange.

Actual construction of an interchange between Exits 2 and 3 — said to be one of the longest stretches without access in the federal interstate system — is years away, perhaps more than a decade, and would need backing from the federal government.

The DOT refers to the project, begun in late 2017, as "a conceptual planning study examining the feasibility of a new interchange."

State Rep. William "Smitty" Pignatelli, D-Lenox, says the DOT-led study will advance a question that's hung in the air for nearly two decades. He said it would be premature for Blandford, which he represents in the Statehouse, to oppose an interchange before hearing from a DOT group this week and then from people at an open house to be held from 6:30 to 9 p.m. Oct. 10 in Blandford Town Hall. The Town Hall's address harks to a bygone form of transportation. It is located at 1 Russell Stage Road.

"We've never had as deep a dive as we have now," Pignatelli said of the study. But in an interview Saturday, he reiterated that he will not support an interchange a majority of residents oppose. "If the town doesn't want it, that's the end of it for me," he said.

Still, Pignatelli cautioned that change can bring valuable civic gains, if communities are prepared to manage growth through zoning. "We have to look at things in the long term. We have to try and reinvent ourselves all the time. This [interchange] could be a game-changer for the Hilltowns."

But change is what worries Pinsley and Missimer. After living and working in other places, the two joined forces a decade ago and have dedicated themselves to caring for Blueberry Joe's mile-wide domain. Pinsley leases some remaining blueberry fields to a grower. Others are cut for hay, stubborn blueberry shoots poking up, here and there, along old mounds across acres of grass.

Missimer, 89, uses a Kubota tractor to keep paths open through former fields. The other day, he and Pinsley took a visitor on a ride through the land in a white Tahoe, climbing the gravel mound they call Fort Hill — with views in all directions. Later, Missimer motors down a serpentine path just wide enough for the vehicle to a beaver pond that runs alongside the road workers use to get to jobs at the Blandford Service Plaza.

Atop Fort Hill, a steady breeze pushes through windows of the Tahoe. It's a reminder of an earlier fight. A decade ago, Pinsley joined Blandford residents to successfully oppose a wind turbine project.

The couple hoped that grassroots effort could be rekindled to oppose a new Pike interchange, but it hasn't happened.

"We cannot seem to get that kind of momentum," Missimer says.

In her recent presentation the Select Board, Pinsley questioned how two-lane North Street will handle truck traffic. She noted that the need to improve turning angles could take a bite out of land at the town's historical society, at Route 23 and North Street. And she pointed out that increased traffic would make it harder for people to get from the White Church of Blandford to a parking lot across North Street.

Missimer and Pinsley also question how big trucks using a new Pike exit will get around a corner from a narrow bridge at the other end of that street, where the road meets Route 20 about eight miles to the north in Chester.

The DOT has calculated that a new interchange would add 1,289 vehicle trips to North Street. The count is higher near Taylor's home to the west, at 2,206 daily trips. Overall, the new interchange at the service plaza would be used 5,900 times a day, the DOT calculates.

Pinsley and Missimer see the scale of that traffic as an attack on their neighborhood's way of life. The interchange across North Street from their property would involve two land-takings and cost $34 million, officials have calculated.

"I don't like the feeling of giving up," Pinsley said. "We put a value on something that's endangered."

Though she grew up in Blandford, college, and then life, took Pinsley away. She returned to run the blueberry farm for a few seasons after her father died in 1980. Pinsley and her late husband bought the place in 1990. The old home was in bad shape for years until she and Missimer undertook a top-to-bottom renovation.

With that investment, Blueberry Joe's daughter put down new roots, in part for the benefit of her own grown daughters, Melissa and Judy.

"We've been preparing it for continuity to the next generation," Pinsley said of the farm. "This will be truncated here by the creation of an exit on North Street. That's a fact."

Pinsley says she gets regular offers to lease space on the farm's fields for photovoltaic solar installations. She turns them all down. A few miles up North Street, a large solar project stretches off to the east, metal glinting in the afternoon sun.

Missimer and Pinsley feel they have resurrected a family connection to this land, only to see it in peril.

"It's become a revered family compound, if you will, and it's under threat," Missimer said. "We choose to make it a place for future generations to enjoy as well."