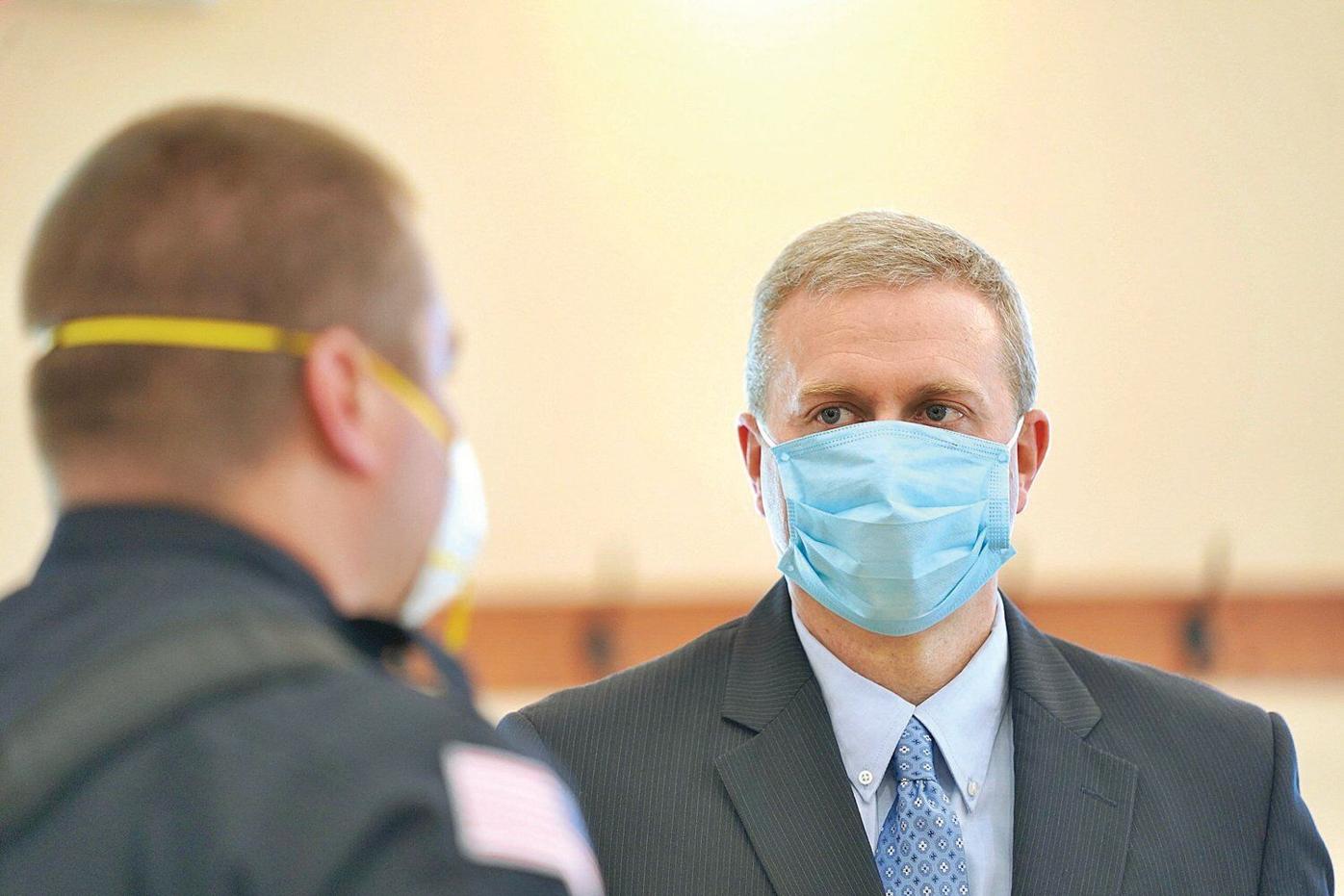 Dalton Police Chief Jeffrey E. Coe is the subject of a hearing Friday in the Senior Center. Coe has been on administrative leave since February. 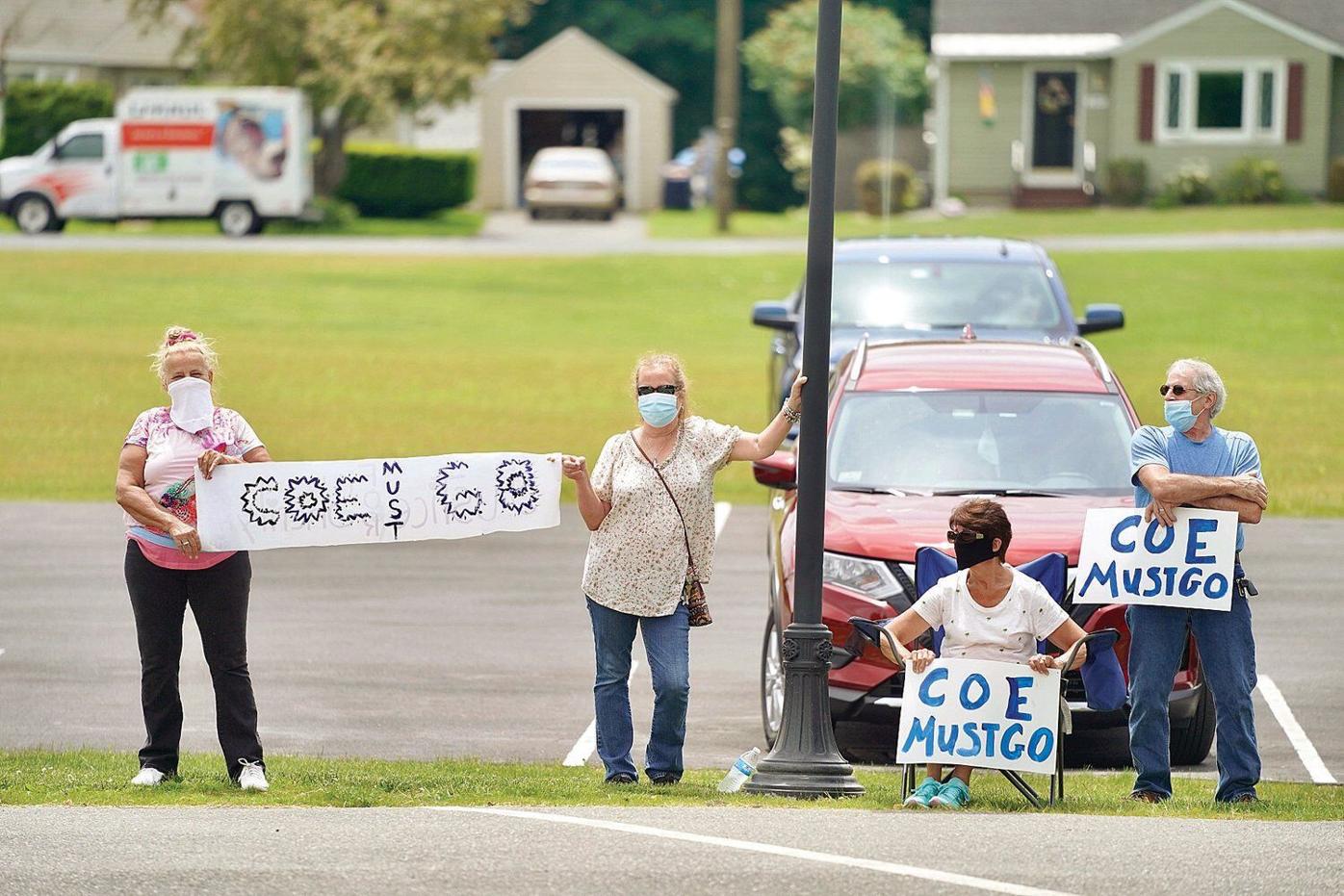 Dalton Police Chief Jeffrey E. Coe is the subject of a hearing Friday in the Senior Center. Coe has been on administrative leave since February.

DALTON — Whether Dalton's police chief helped or hindered the career of a former rank-and-file officer lies at the heart of an investigation into his eight-year management of the department.

A hearing that began Friday into Chief Jeffrey E. Coe's conduct in office ran for three and a half hours Friday, with an outside investigator as the sole witness. The hearing will resume June 18 at 10 a.m. at the Dalton Senior Center.

Coe was placed on paid administrative leave this winter for reasons withheld from the public until Friday, when attorney Timothy D. Zessin, representing the town, leveled the claim that Coe discriminated against Dorothy DiMouro, a former officer under his command. Coe's attorney refuted the allegation.

As officials arrived at the hearing, they were greeted by more than a dozen people gathered outside calling for Coe's dismissal.

When DiMouro left the department several months ago, she filed a complaint alleging she was subject to "disparate treatment, harassment and discrimination," Zessin said.

"That's the bulk of the evidence you'll be hearing about," Zessin told Patricia Vinchesi, a municipal consultant hired by Dalton to collection and appraise evidence in the case against Coe, Dalton's chief for more than eight years.

"He elevated her to a higher level of policing," Akerson said of Coe. "She wouldn't have a police career without him."

Akerson asked Vinchesi to keep an open mind and questioned the motives of protesters outside.

"That's a certainly small faction of the town that has a political motive in this case," Akerson said.

Town Manager Kenneth Walto said he hired Vinchesi because he is personal friends with Coe, whom he supervises. Vinchesi's appointment calls for her to prepare and submit a report within seven days of the hearing's conclusion.

Friday's only witness was Alfred Donovan, a former Tewksbury police chief hired to look into DiMouro's allegations against Coe. The case against Coe centers of three allegations; Donovan said he did not find grounds for several other complaints presented to him by town officials.

While most members of Dalton's Select Board listened to the hearing from a wing of the center center, one of them, John Boyle, declined to join his colleagues and sat with the general public, saying he disagreed with fellow board members over Coe's forced leave.

"This case is a nothing-burger and he should be reinstated immediately," Boyle said of Coe.

Ahead of the hearing, people gathered in small groups to protest the Dalton department's handling of a 911 call last November in which help was requested for a despondent young woman.

No Dalton officer responded to the scene. The woman, Sherilyn Hayes, was found dead by suicide roughly 45 minutes later.

"I felt that little girl was not treated adequately, fairly or responsibly," said Sue Para, a former coworker of Hayes at Home Goods. "She was a lovely, lovely girl."

Para and a friend stood outside with a sign reading, "Justice for Sherilyn."

"He should have been on the ball and had his officers perform their jobs responsibly," Para said of Coe. "She was too young to die."

Hayes' mother, Trisha, of Pittsfield, sat through much of Friday's hearing, holding a sign festooned with photos of her daughter as a young girl.

Jessica McNair, of Pittsfield, said she came to press for accountability in policing, including locally. She feels the Dalton department failed to protect Hayes and questions whether Coe did enough "in holding his own officers accountable for their actions."

The Select Board last month dismissed John Marley, the senior officer on duty Nov. 23, the night Hayes died. He is expected to appeal his firing.

Tim Litz Jr., of Dalton, stood outside with a sign that said, "Bring integrity back to the D.P.D."

"There is a lot that has gone on with the death of a citizen," Litz said. "It seems like Chief Coe has done nothing but protect the officers who should be held accountable."

Before the session started, Coe was overheard saying he wanted the situation regarding his leave to be made public as soon as possible.

Along with the DiMouro complaint, Donovan's report to the town faulted Coe for two things: creating a video posted on an internal network that appeared to ridicule an officer for mistakes in filling out his time sheet and for forwarding an email of a cartoon that teased the word "rapist" out of the word psychotherapist.

Akerson, Coe's attorney, said it was ridiculous to assert that Coe was making light of rape in the forwarded email.

And he took aim at Donovan, citing a report in a Civil Service Commission case in which the panel faulted Donovan for inadequate work on a job involving the town of Agawam.

"There's information out there that we don't know about," Akerson said.

He prodded Donovan to explain why he didn't include, in his report, a "stack" of supportive messages Coe had sent to DiMouro. "This is something that would have been beneficial to the chief's case, wouldn't it?" he asked.

When the hearing resumes June 18, officers from the Dalton department are expected to testify.

Vinchesi will submit a report to Walto, who has the authority to accept, reject or modify her recommendations.