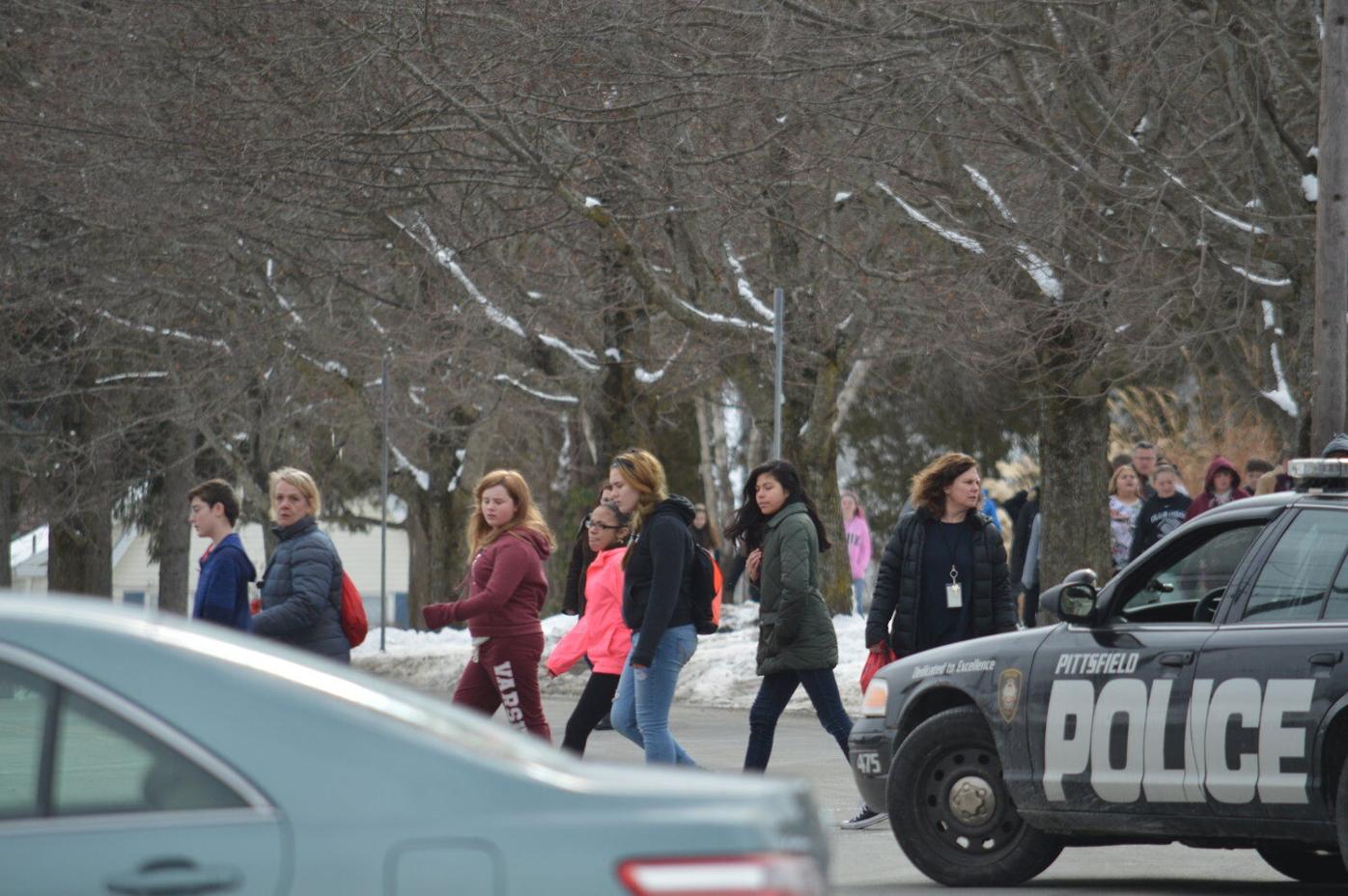 Students return to Reid Middle School in Pittsfield after they were evacuated during a bomb threat on Feb. 2, 2017. 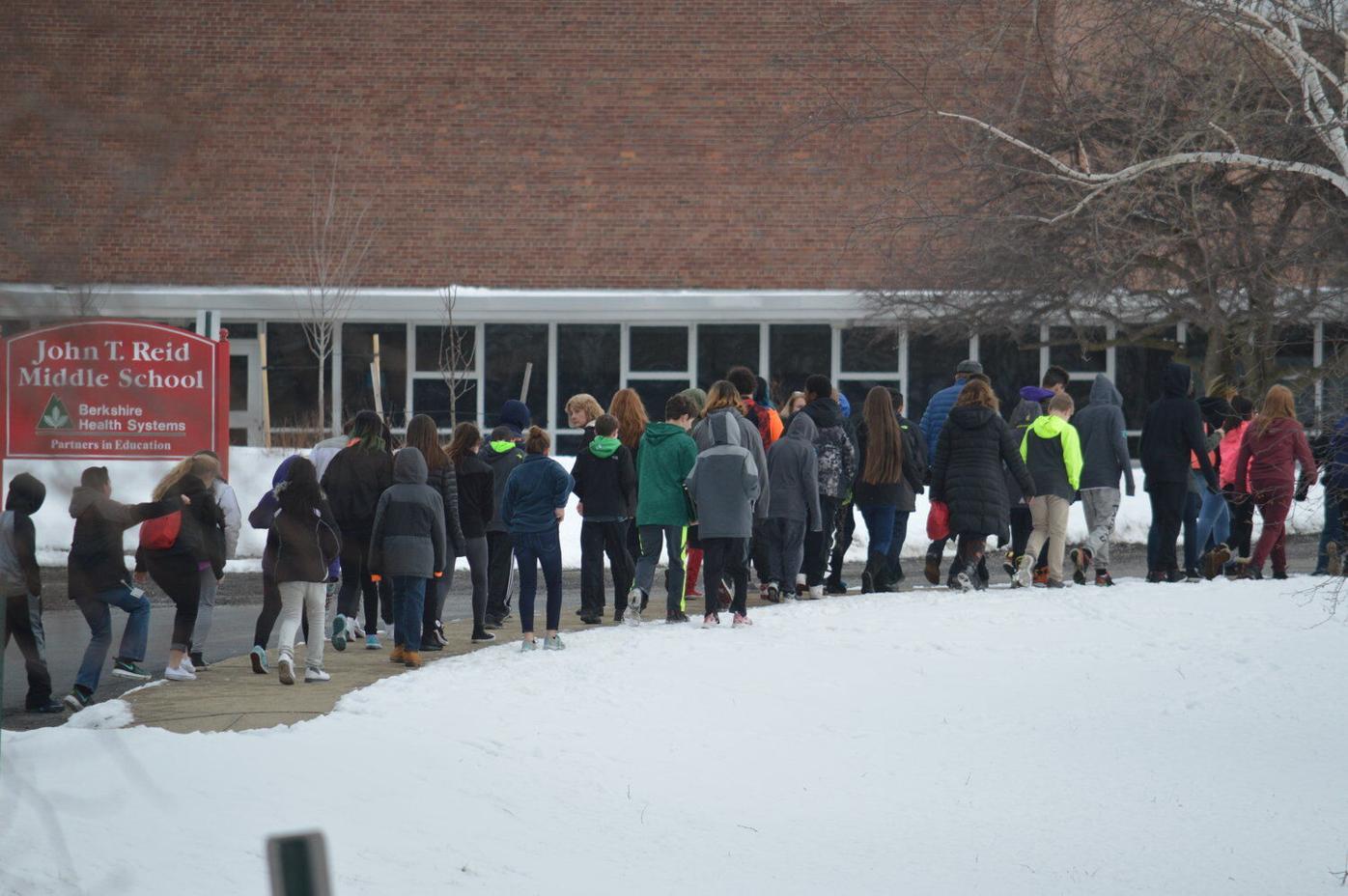 Students file back to class after a bomb threat at Reid Middle School in Pittsfield on Feb. 2, 2017.

Pittsfield Police Patrol Officer Ignacio Matos closes off the grounds at Reid Middle School in Pittsfield after students were evacuated during a bomb threat on Feb. 2, 2017.

Students return to Reid Middle School in Pittsfield after they were evacuated during a bomb threat on Feb. 2, 2017.

Students file back to class after a bomb threat at Reid Middle School in Pittsfield on Feb. 2, 2017.

Pittsfield Police Patrol Officer Ignacio Matos closes off the grounds at Reid Middle School in Pittsfield after students were evacuated during a bomb threat on Feb. 2, 2017.

PITTSFIELD — What quells safety concerns for some families creates them for others.

That much was clear during Tuesday night's City Council meeting.

Whether Reid Middle School should get a permanent school resource officer like other schools have — and whether any city school should have them — was a prominent topic during the public comment portion of the meeting. The back and forth prompted promises from Mayor Linda Tyer and city councilors to publicly vet the issue and hear from the public.

The conversation will take place in the council's Public Health and Safety Committee; the meeting has not yet been scheduled.

Mayor Linda Tyer said during the meeting there were several resignations from the Pittsfield Police Department over a short time, including one from the former resource officer, Martin Streit, included. That placed a temporary strain on patrol resources, she said.

The city is filling the vacant position on a rotating basis, she said, and will work to fill it more permanently in the coming months. Still, she said the larger conversation about whether the city should deploy school resource officers at all in its middle and high schools is one worth having.

"I understand both sides of the issue," she said.

Eden-Renee Hayes, city resident and dean of equity and inclusion at Simon's Rock College, said her background is in social psychology and implicit bias. Age factors into a police officer's decision to apply force and at what level, she noted, and she's familiar with studies showing that officers look at black boys and think they are older than they are.

Her son goes to school at Egremont Elementary School and is afraid of police officers, she said.

"They're perceiving the black kids as older and the white kids as younger," she said. "It's those intersections we have to think about. They want to use force against little black 8-year-olds."

Susan Lord, who said she provides services in city schools in areas of trauma and stress, told councilors that police officers in schools push children into a state of fight or flight.

"When they're more afraid, they tend to act out even more," she said.

"This is not to disparage the police; they're doing a great job," he said.

But Steven White, one of the parents behind an online petition to replace the resource officer position on a permanent basis, pointed to concerns on Monday about a gun on the Berkshire Community College campus. While the threat was not substantiated, White said there are reasons to worry about the children.

He suggested the city ask the Berkshire County Sheriff's Department for help.

"Let's always keep our children as safe as possible," he said.

Councilor at Large Pete White said there was a resource officer at Taconic High School when he was a student and the officer was someone he and other students grew close with.

"It's somebody that they get to know," he said.

"Those school resource officers are good listeners," he said. "I've seen them in action."

"We're frequently expecting our police officers to take on roles that they're not trained to do," she said. "We're expecting them to replace our mental health clinicians further upstream."

Councilor at Large Earl Persip III added that the patrol shortage behind the vacancy underscores the city's need to address police salaries. Officers make more when they leave the department for the Massachusetts State Police, Tyer said, as well as other law enforcement agencies like the Berkshire County Sheriff's Department.