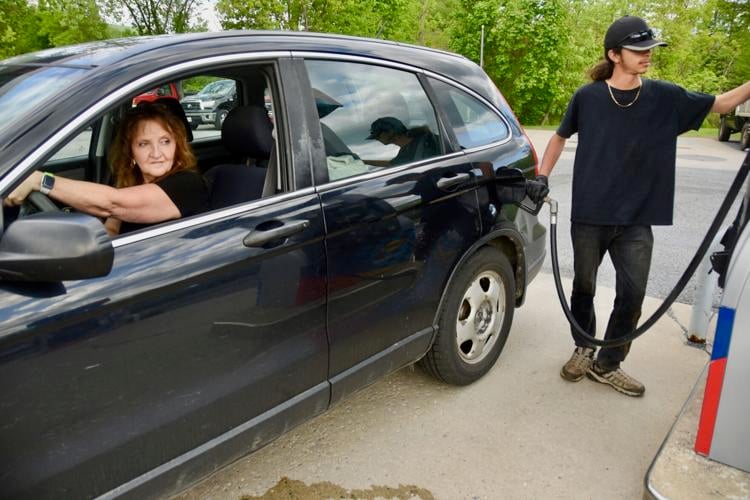 Gas station attendant Louis Trinidad pumps gas for a customer at Carpinello's Sunoco gas and service station in Williamstown. Trinidad said he hasn’t had anyone get angry at him about the prices. “Everybody’s frustrated, but they know it’s not my fault." 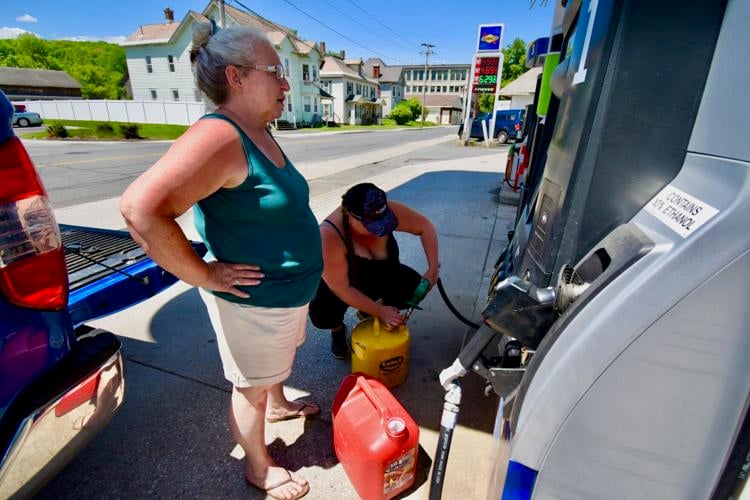 Lisa Walters, left, and Jaimie Spencer fill up gas cans at the Z Mart in North Adams to use in running their tractor. 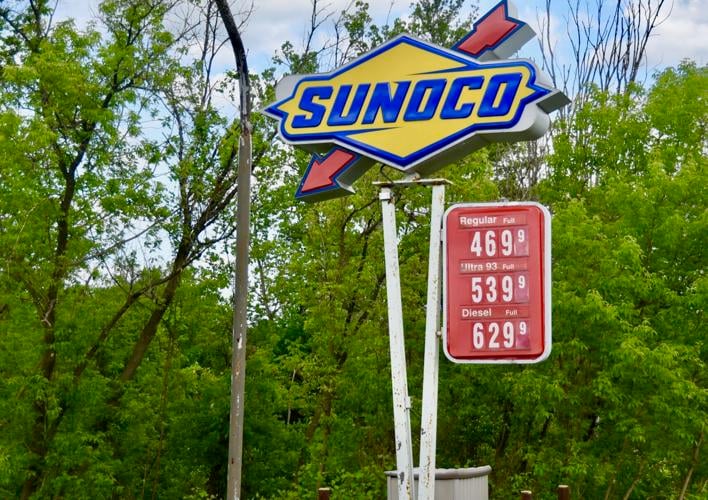 Gas prices are approaching $5 per gallon for regular across Massachusetts. 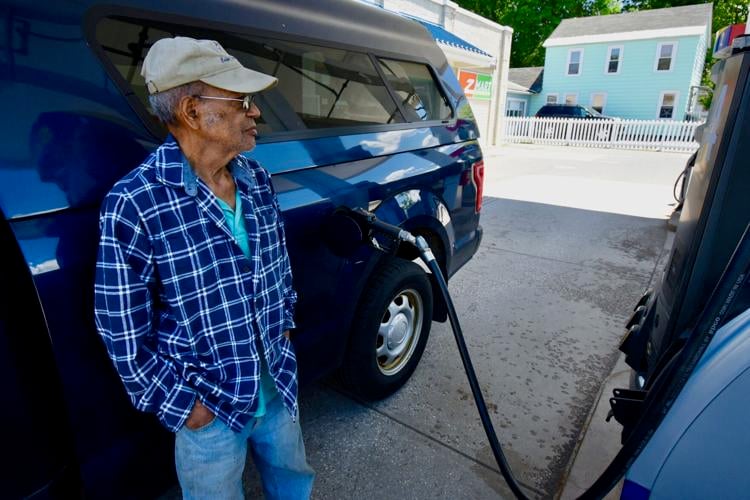 Kent Clark watches as the dollars click by while he fills up his truck at the Z Mart in North Adams.

Mel Rabadi, the public face of a North Adams gas station, is known for his sense of humor. For wearing a smile.

With average gas prices in Massachusetts hovering around $4.73 per gallon for regular, frustrations are mounting among customers and gas station workers alike.

Motorists are feeling the pain and cutting back, station owners say. That becomes a problem for stations, whose profit margins depend on drivers coming inside for the higher-profit items, like coffee, sodas and snacks. One local station owner said sales are down more than 20 percent compared to a year ago.

“They know none of this is our fault, but they complain about the high prices anyway,” one Berkshire County retailer said.

Gas station and convenience store staff like Rabadi and having to be extra patient with unhappy customers.

“It’s really hard,” said Rabadi, who manages the Z Mart Sunoco station and convenience store on Ashland Street. “I’m the face to the community, so all the complaints come to me. And we have to eat some of the price increases so we can keep the prices as cheap as possible to stay competitive.”

John Carpinello, owner of a full-service Sunoco station in Williamstown, said he doesn’t set gas prices, the fuel distributors do. That leaves station owners like him in the middle, between supplier and customer, with little option but to weather the storm.

“When prices get so high, people drive less. And when they drive less, they don’t need to repair the car that much, so it does hurt us,” he said.

Like other gas sellers, his contract with the gas distributor requires prices to be set by the distributor. Station owners, however, have reason to want to keep prices as low as possible, because the local market becomes much more competitive when prices climb so high.

Louis Trinidad, a gas station attendant at Carpinello’s, says he hasn’t had anyone get angry at him about the prices. But they do complain about it, sometimes jokingly.

“Everybody’s frustrated, but they know it’s not my fault,” he said.

Pierre Kareh, co-owner and manager of the Mobil station and convenience store on Howland Avenue in Adams, said credit card companies charge a percentage of sales to the store, a cost which is factored into the price of gas.

If folks stopped using plastic to pay for gas, it would help slightly in keeping the prices down, he said.

“That kills us, it kills the market, and it kills the truckers,” he said. “It also hurts the cost of delivery of the gasoline to the stations. But we have to keep the prices as low as possible to keep people coming into the store.”

He said there have been some complaints, but most folks understand there’s nothing he can to do alleviate the increasing burden of high gas prices.

Ankit Patel, owner of several gas station and convenience stores around the region, including a Shell station in Great Barrington, said the high prices have hurt business, as fewer people are stopping by to fuel up. He said sales in May are down 20 to 40 percent compared to May of 2021.

“A lot of people are hurting right now, and they’re not driving as much,” Patel said. “That hurts business. And they get frustrated when the prices keep going up, so they complain.”

He said the political opinions do come into play. “Some blame the government, some blame the [Ukraine] war,” Patel said. But despite politics and complaints, “all we can do is keep the company setting the prices as low as it can, and hope for some relief.”

For the handful of old-style gas stations in Berkshire County that don’t have a convenience store, but repair cars as well as sell gas, the formula is slightly different. That has affected businesses like Carpinello’s station in Williamstown.

Price for gallon of gas increases by 11 cents in Berkshires

Rabadi, the station manager in North Adams, says that if his prices are higher than the station across the street, he’ll have fewer gas customers. And worse, if nobody is buying gas there, then no one is coming inside for the higher profit margin items which keeps him in business.

In any case, he has nothing to do with setting the price of gasoline. “I’m just the manager here,” Rabadi said. “I don’t set the gas prices. Somebody else in the company tells me what the prices will be.”

He said he can’t explain the dynamic of such high prices, but speculates that in the oil business, there is a significant “greed factor.”

At current prices, owners of pick-up trucks and some SUVs have to pay roughly $80 or more to fill up.

"We have to keep the prices as low as possible to keep people coming into the store.”

Pierre Kareh, co-owner and manager of a gas station and convenience store in Adams

“If you take out the greed factor, the gas prices would be 25 to 35 cents cheaper per gallon,” Rabadi said. “The oil companies are making record profits right now. Where is all that coming from?”

He also noted that during the pandemic shutdown, when most folks were not using their cars, the gas prices were in the neighborhood of $2.19 per gallon.

Lisa Walters of North Adams stopped by the Z Mart last week to fill up a couple of gas cans to fuel her tractor at home. She also works at RJ’s Taxi.

“I work for a cab company and it [high gas prices] is killing us,” she said.

Gas prices near $5 per gallon on average in Massachusetts, but lawmakers aren't passing any kind of gas tax relief yet

Prices have surged past the $5 a gallon mark at many stations and averaged out at $4.96 in AAA's latest survey, taking a bigger bite out of household and business budgets and hitting low-income residents hard.

Will oil and gas prices in the Berkshires go down any time soon? We ask a Berkshires investment adviser

Bill Schmick, a Berkshires investment adviser, is a student of global markets — and author of a weekly financial affairs column in The Eagle. We asked him to give us his forecast on today's eye-popping oil and gas prices.