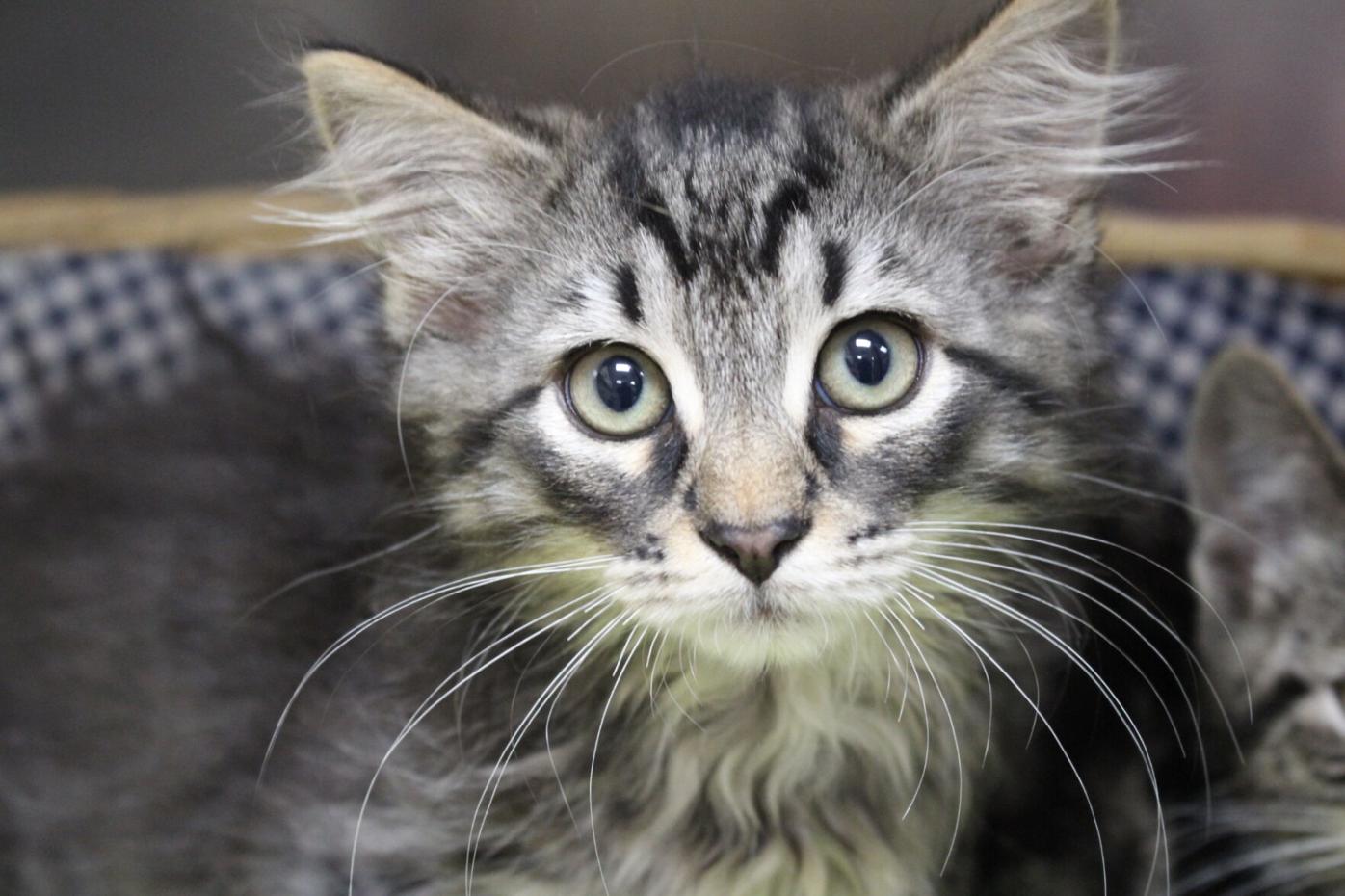 Wilson is one of the many cats adopted at the shelter in 2020. 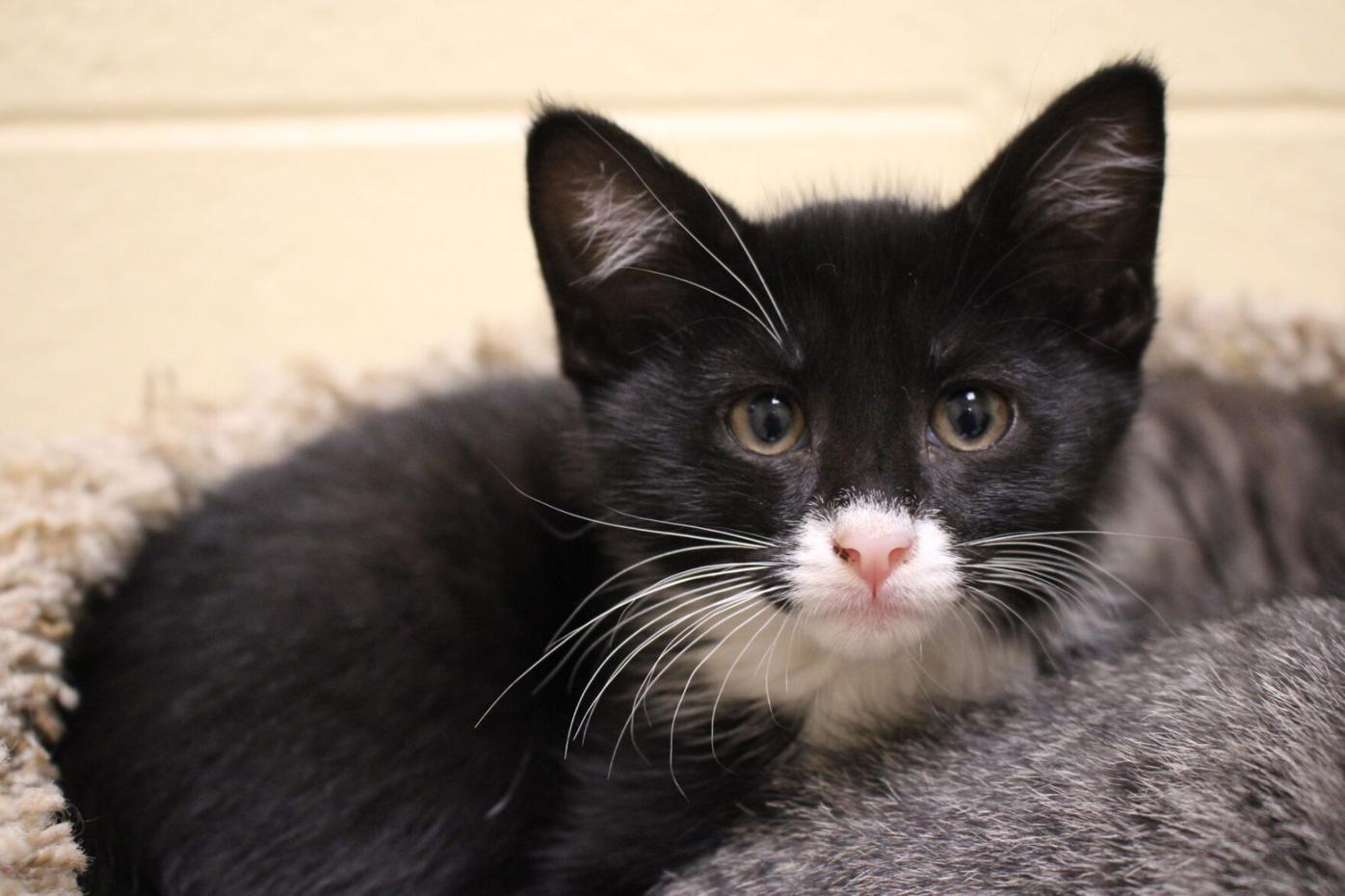 Panda was adopted in 2020 at the Berkshire Humane Society. 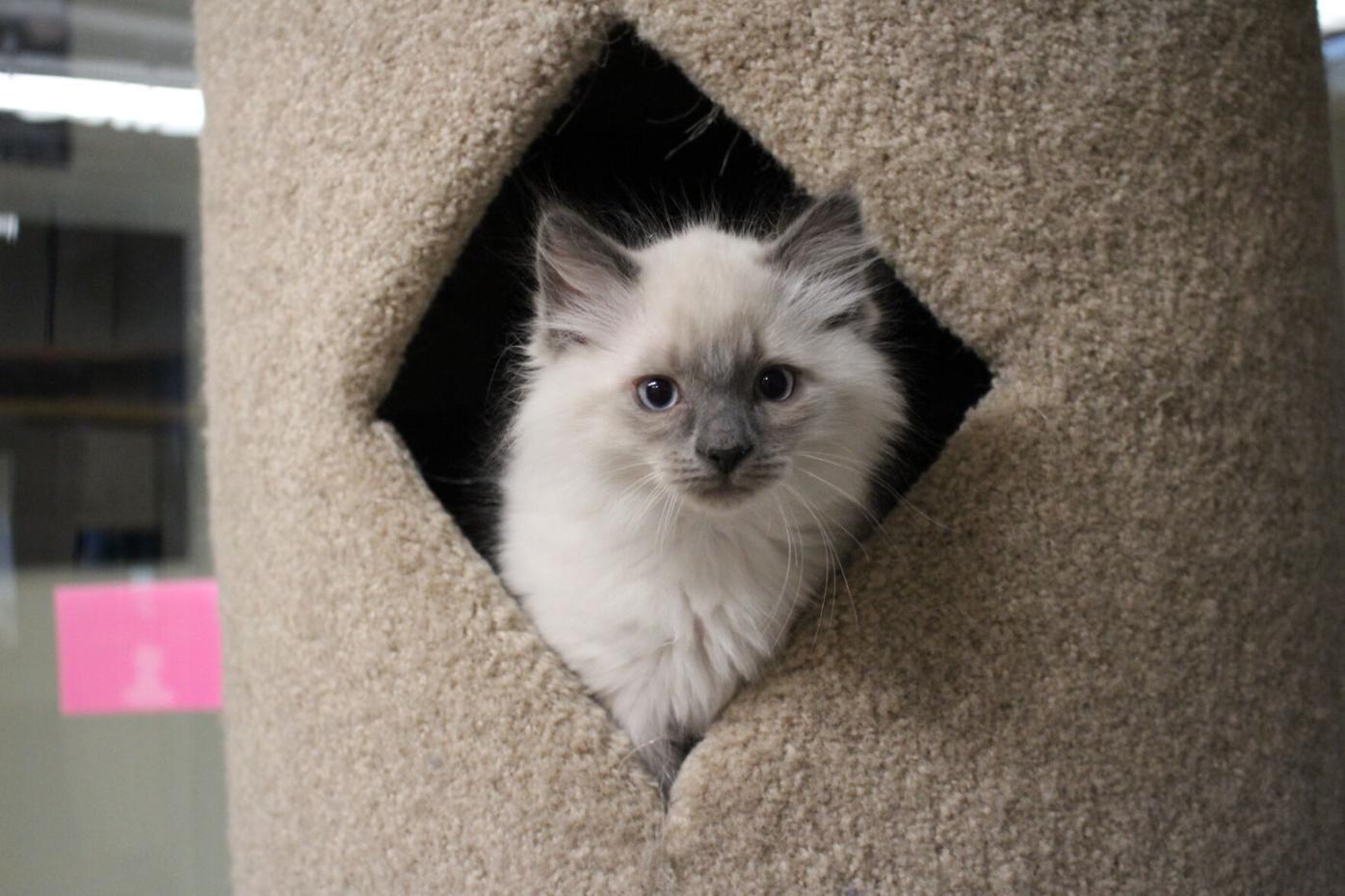 For those area residents interested in adopting a cat or dog — or guinea pig or rabbit or rats — they should call the shelter at 413-447-7878 to speak with an adoption counselor. 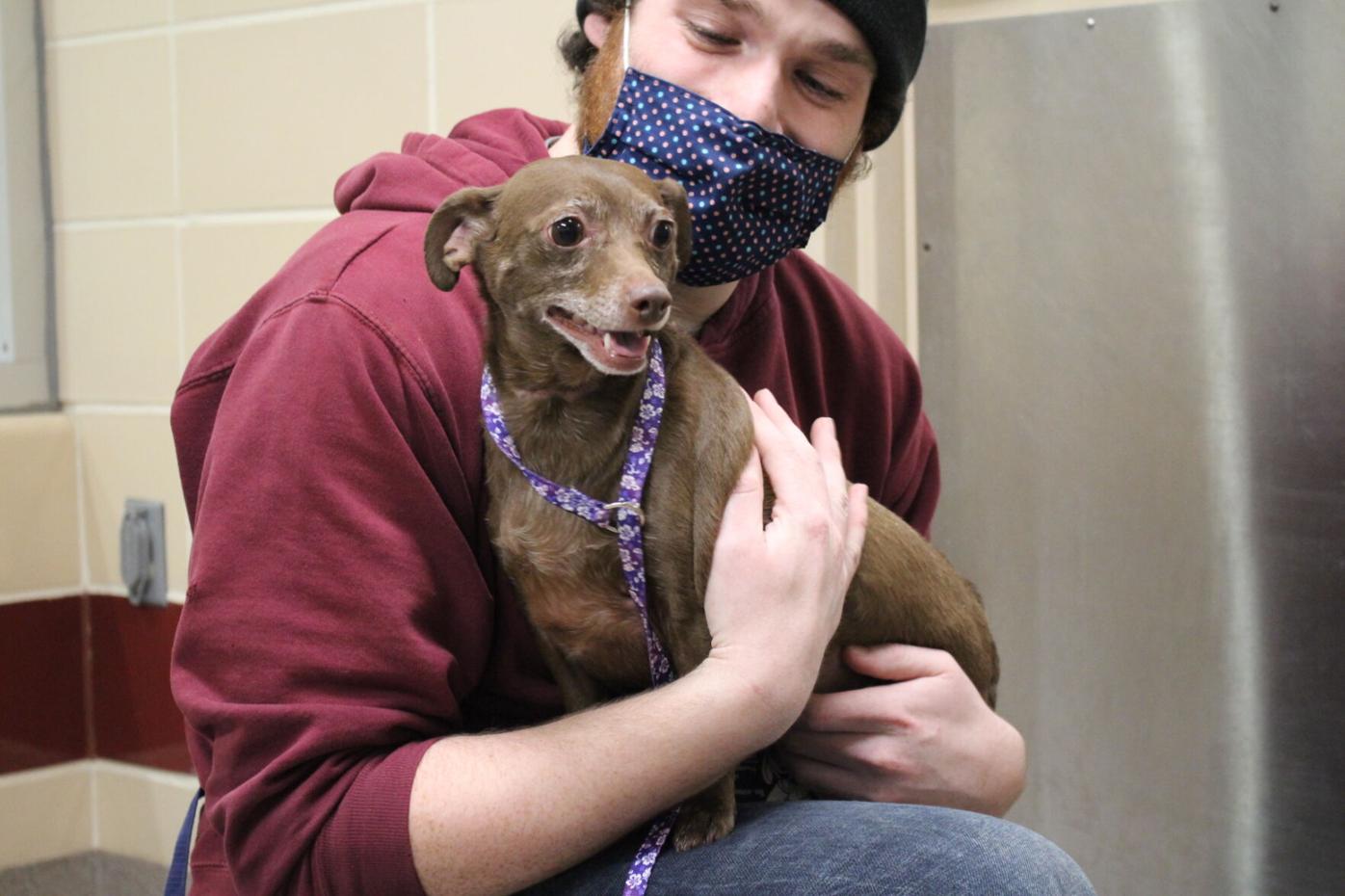 Sam Klass gets a lapful of Cocoa during a recent day at the Berkshire Humane Society. 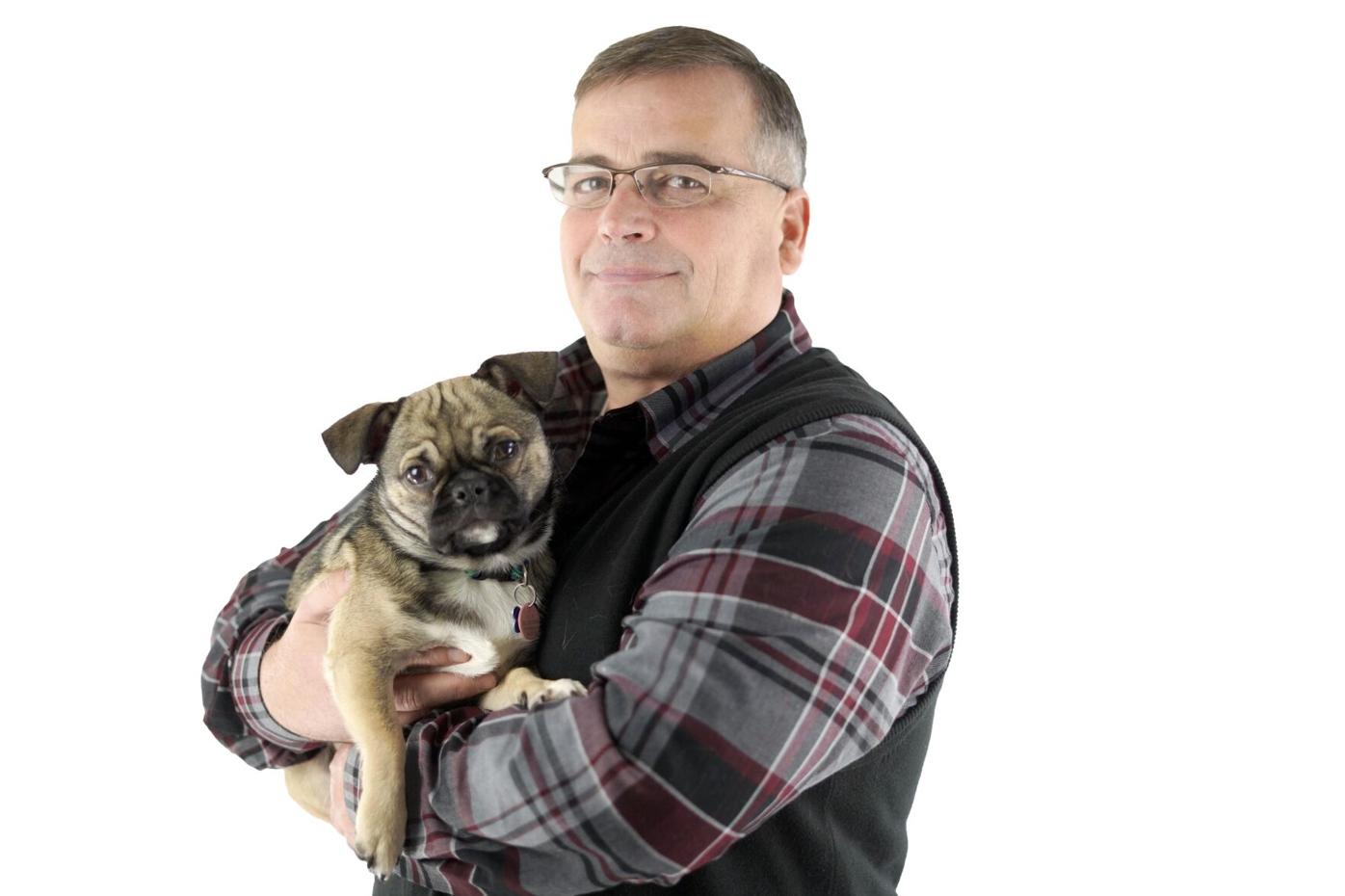 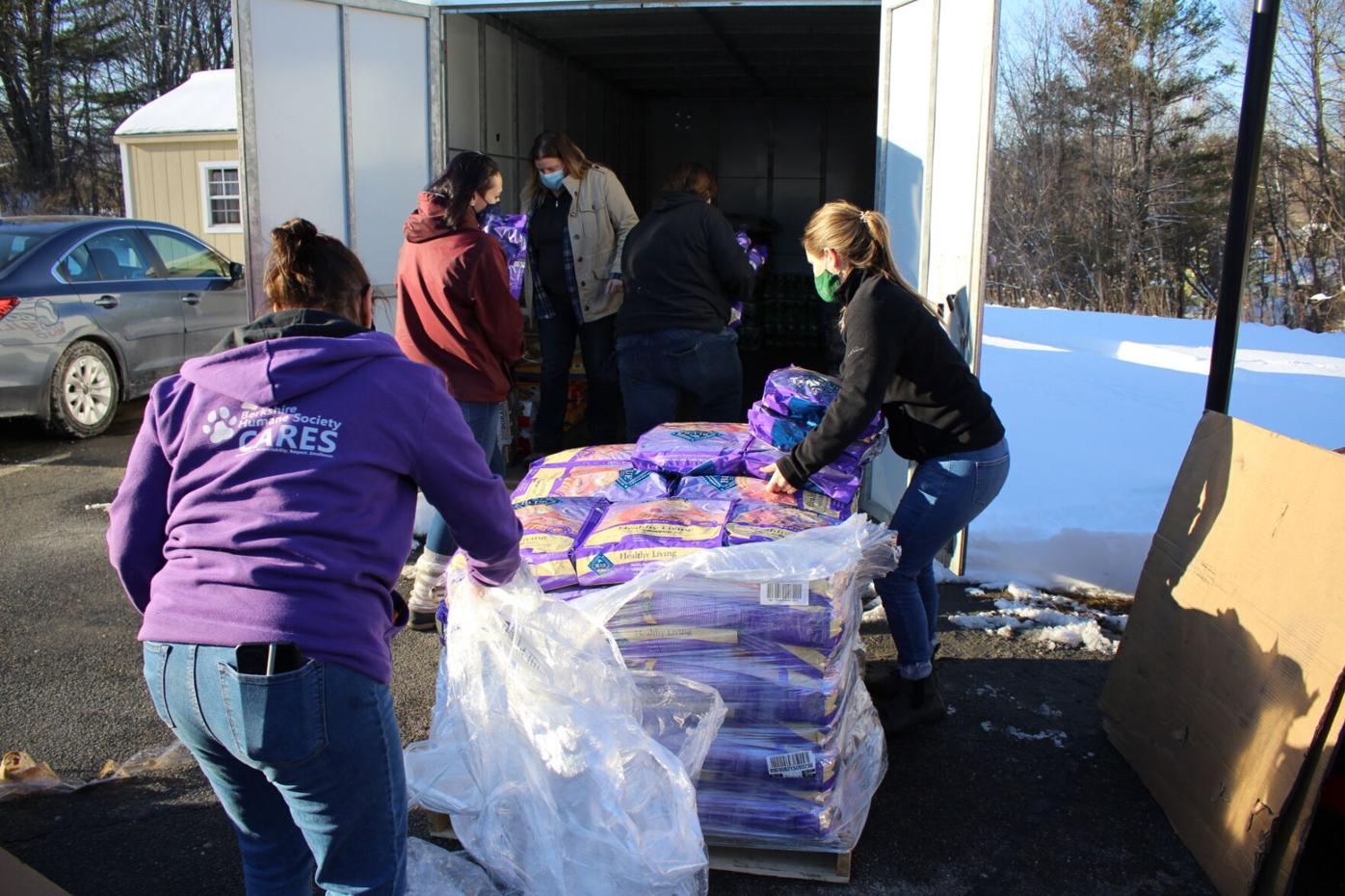 The shelter is a volunteer with the Massachusetts Pet Food Task Force, which identifies pet food deserts around the state and then directs supplies to those affected places.

PITTSFIELD — Before the pandemic, pet adoptions at the Berkshire Humane Society were trending in the right direction.

“Our adoptions were up, and length of stays that the animals were in our building were dropping,” says John Perreault, executive director of the Berkshire Humane Society on the aptly named Barker Road.

Then COVID-19 hit, and high demand went even higher.

“All of a sudden, everybody who was now working from home, who formerly didn’t have the time for extracurricular activities, realized that it was the perfect time to bring a dog into their home,” says Perreault. “Our applications just quadrupled.”

Likewise, requests for pet food aid have skyrocketed, says Perreault, up some 200 percent from a year ago. He says the Pittsfield shelter has received more than 1,000 requests for food assistance since the pandemic began.

Getting appointments for spay or neuter surgeries has also been difficult, with the shelter having to devote a staffer to pet surgery placement, he says; veterinarian offices are swamped, too.

Perreault hasn’t witnessed demand like this, even with a career in animal welfare that dates back to the 1980s.

The shelter recently reopened its doors to visitors March 2 after closing around the holidays because of a surge in COVID-19 cases across the region; throughout the pandemic, it remained open by appointment. Its Catwalk Boutique thrift shops in Lenox and Great Barrington just reopened, too; proceeds at these sites go directly to shelter operations. Purradise, the shelter’s satellite feline adoption and boarding facility in Great Barrington, will reopen March 30.

Because of the demand here, Berkshire Humane Society transports dogs to the Berkshires from other partner shelters that aren’t as flush with applicants or that wrestle with pet overpopulation. However, during the lockdown and other periods in the past year, there were months where there were no transports, says Perreault, which further contributes to a backlog of applicants.

‘Right back out the door’

“I have so many applications, that as soon as dogs were coming in, we were able to turn them around right back out the door,” he says.

If you were to go on the society’s website today, you’d see a passel of pups waiting to be adopted. But, these are only a fraction of the dogs that pass through the shelter’s doors.

“On the canine side, we receive more dogs than you’ll ever see on the website, and that’s because as they come in, we know people are looking for them. When we think we might have a match, we make an appointment for them and then show them the appropriate animal. During that time, the animal isn’t available for anybody else,” says Perreault.

Most adoptions are done by appointment. If you do see an animal on the shelter’s website, it does mean that it is available, he added.

Getting animals into homes efficiently is great for everyone involved, he notes.

But, all the adoptions have also spawned another logjam.

“It’s very difficult to get cats spayed and neutered at this time and moment. Along with this big explosion of people who want to adopt animals, and we have veterinarians that are struggling to keep up with the demand,” says Perreault.

The same pandemic pressure is affecting veterinary offices, too, as their existing clients have increased their pet visits.

“Nationwide, there is a shortage of veterinarians at the moment. You’ve got all these animals out there, and people want to do the right thing and bring them, but it’s hard to get an appointment,” notes Perreault.

“All of a sudden, they can’t see their own clients, so all that extra stuff they are doing for us is much more difficult to do than in the past,” says Perreault. “We have a few veterinarians that are struggling to help us out as much as they can, but at the end of the day, we’re still looking to get more dogs and cats spayed and neutered.”

He says that related funding, such as from the Massachusetts License Plate program, has gone unused because it’s hard to find the surgeries.

Perreault adds that the shelter has received widespread support from the vet community since its incorporation in 1993, and he expects that stakeholders will come up with a Berkshire-based solution soon. He says regional brainstorming is underway.

Meanwhile, a staff member is now assigned full time to handle placement of puppies and kittens at vets’ offices for surgeries.

The shelter is a volunteer with the Massachusetts Pet Food Task Force, which identifies pet food deserts around the state and then directs supplies to those affected places.

The shelter keeps a task force pod on its property and tries to keep it stocked with pet food, much of which comes from generous volunteers. It’s also mobile, meaning it can be brought to the far-flung reaches of the Berkshires.

“We’ll get it to areas that can’t come to us for food. People who live in New Marlborough, the Hilltowns, places like that. We’re making sure everybody that needs pet food has access,” says Perreault.

Another example of pandemic fallout is that there’s more need than there is food in the pod: “We have people, who used to be huge contributors to our pet food bank, that find themselves now needing the pet food pantry.”

Perreault says cash donations help, as they allow the shelter to buy pet food at wholesale prices; gifts of pet food from shoppers who pick up an extra bag or case of cans are always welcome, too. But, he stresses, these donations just scratch the surface of the need.

“We have tremendous support from the community about providing food, but it’s still not enough. There’s a huge need there, especially on the feline side. People think ‘pet food,’ and everybody thinks ‘canine.’ But cat food and cat litter are two big needs of people in the community,” he notes.

The shelter still relies on donations to maintain its budget. It often finds itself the beneficiary of community events, such as a recent vegan meal night at Chez Nous, in which a portion of proceeds went to the Berkshire Humane Society.

Even with the generosity, Perreault says the nonprofit’s coffers have taken a bit of a hit during the outbreak, as a number of its keystone annual events ended up canceled. Similarly, children’s programs — such as the Humane Heroes and Defenders, vacation camps, summer and day camps — all ceased for safety reasons during the pandemic, he says.

An annual Woofstock 5K and Dog Walk and Humane Race also were canceled.

“Most of those big events we’ve had just didn’t happen. We’ve had to pivot like everybody else,” says Perreault.

Getting back to business as usual

Perreault says he is looking forward to reopening the shelter’s satellite office in Great Barrington soon for feline boarding. Meantime, staff has been making use of the time, conducting cross training and catching up with projects.

The shelter will slowly bring back volunteers as soon as the coronavirus vaccines are proliferated and infection rates continue to drop, he says.

For those area residents interested in adopting a cat or dog — or guinea pig or rabbit or rats — Perreault encourages interested people to call the shelter at 413-447-7878 to speak with an adoption counselor.

“Come in, fill out an application, let us get to know you. We work as a team. You call us and let us know you’re looking, and together we find you the right pet,” says Perreault.

Benny found his family: Other homeless pets from the south did, too

PITTSFIELD — First, he was Spaceship; now, he's Benny. He's the 6-month-old puppy that Kayla Wixsom and her family brought home Wednesday from the Berkshire Humane Society.

PITTSFIELD — John Perreault received an internship at an animal shelter while he was growing up in Methuen. The experience changed his life. "I had an internship through school," he said. "The …

During giveaway in Pittsfield, pet food snapped up quickly

PITTSFIELD — Adoptions are up, but donations are down. In the age of social distancing, the Berkshire Humane Society has seen an uptick of adoptions — 48 animals went to new homes over …

Snouts, day in and day out

PITTSFIELD — When you’re a guest at MyCom Federal Credit Union, CEO Nancy Canino demands that you be on your best behavior.

PITTSFIELD — Jim Underdown and Tylor Harrington don’t have any love for bloodsuckers, and they aim to send them all packing from our fine Berk…