The good and bad news about COVID-19 in the Berkshires, compared to last Thanksgiving 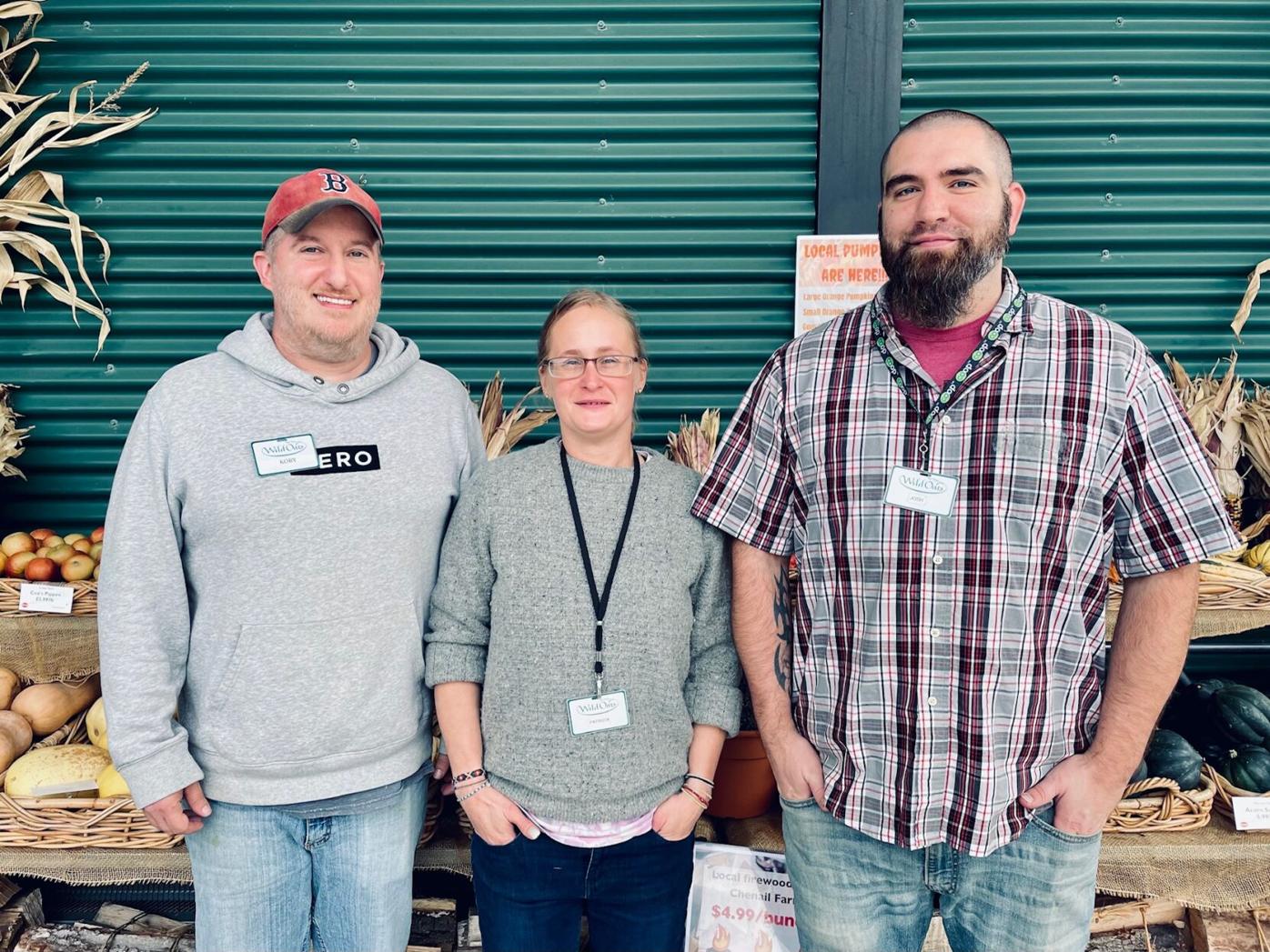 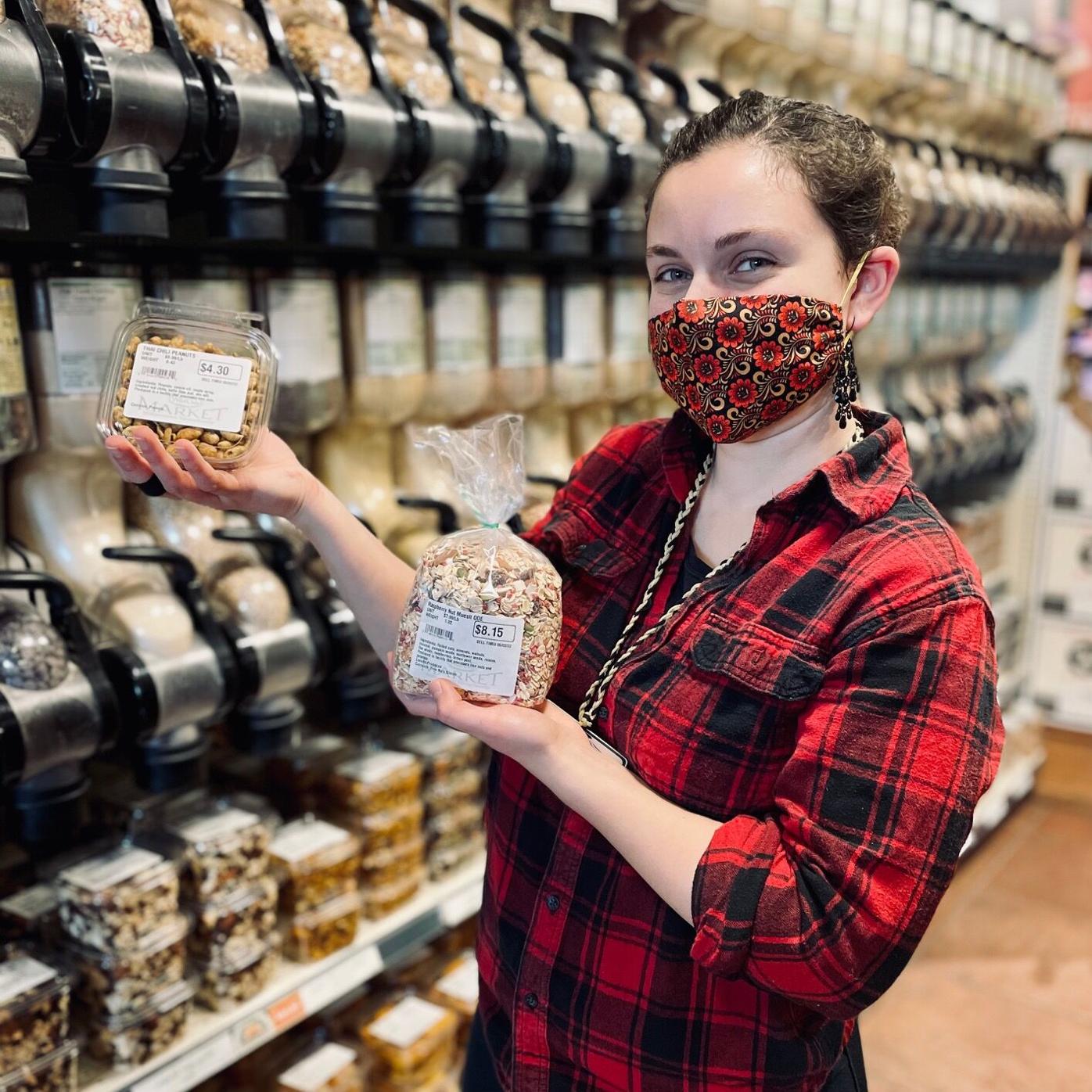 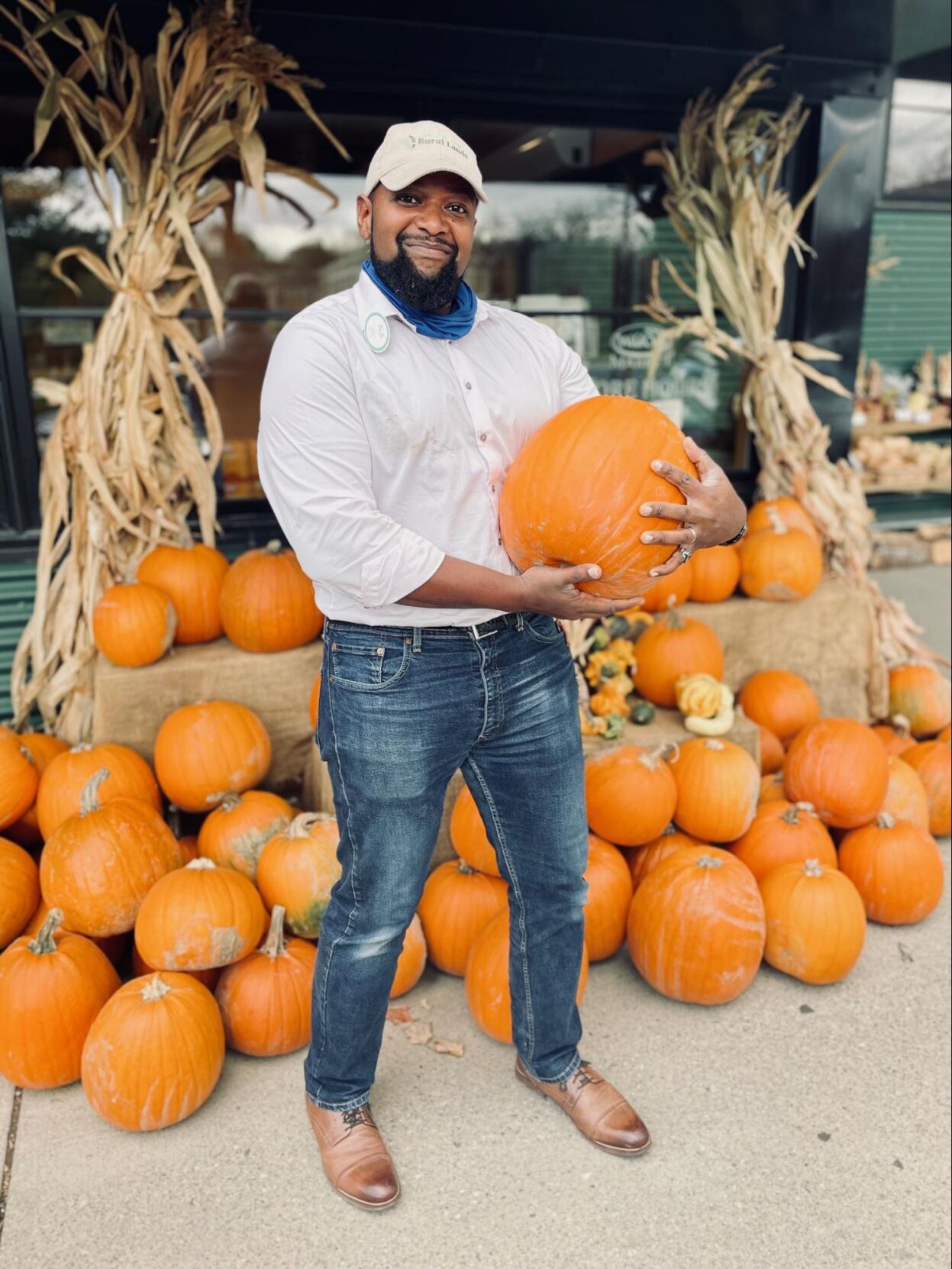 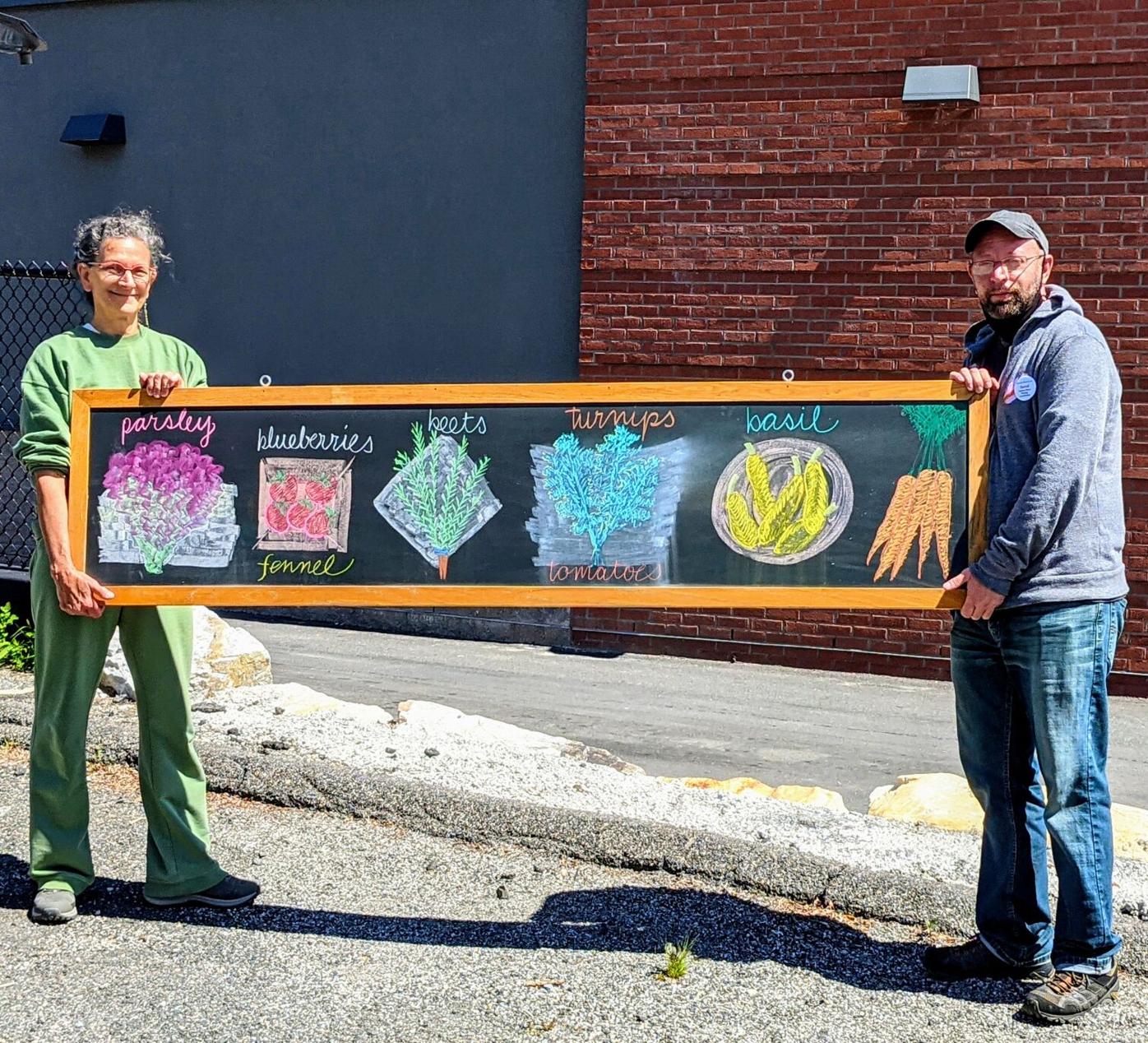 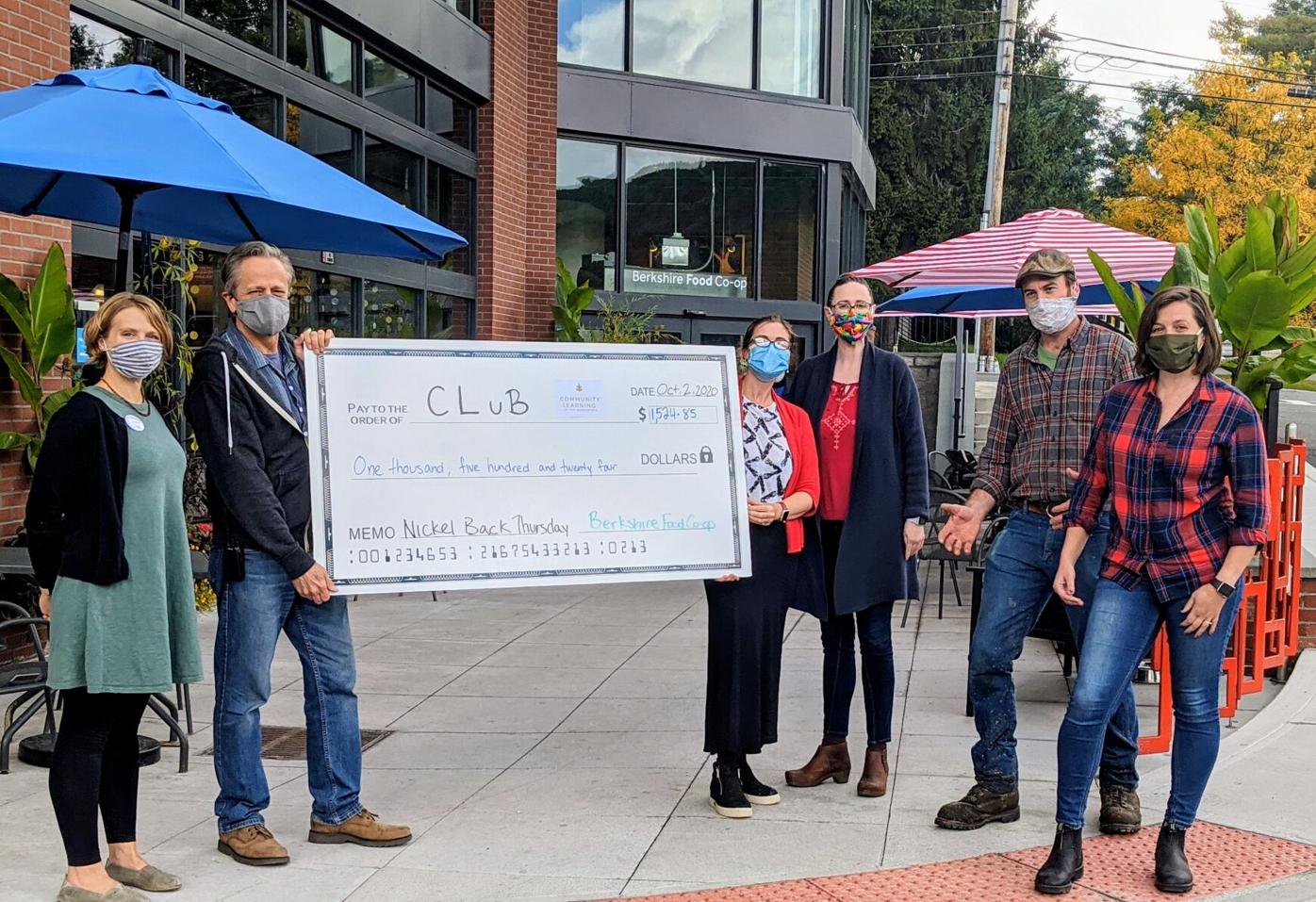 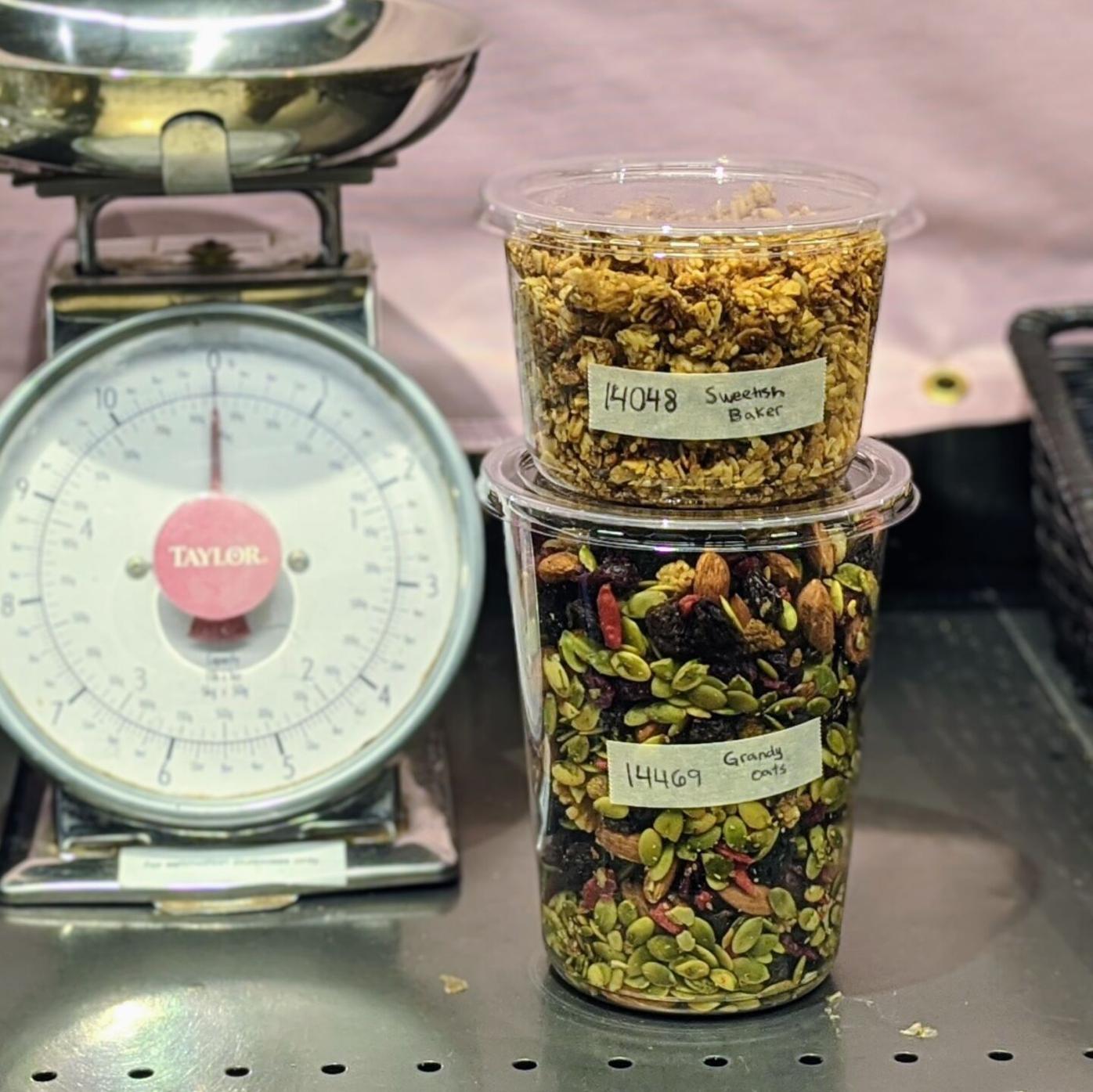 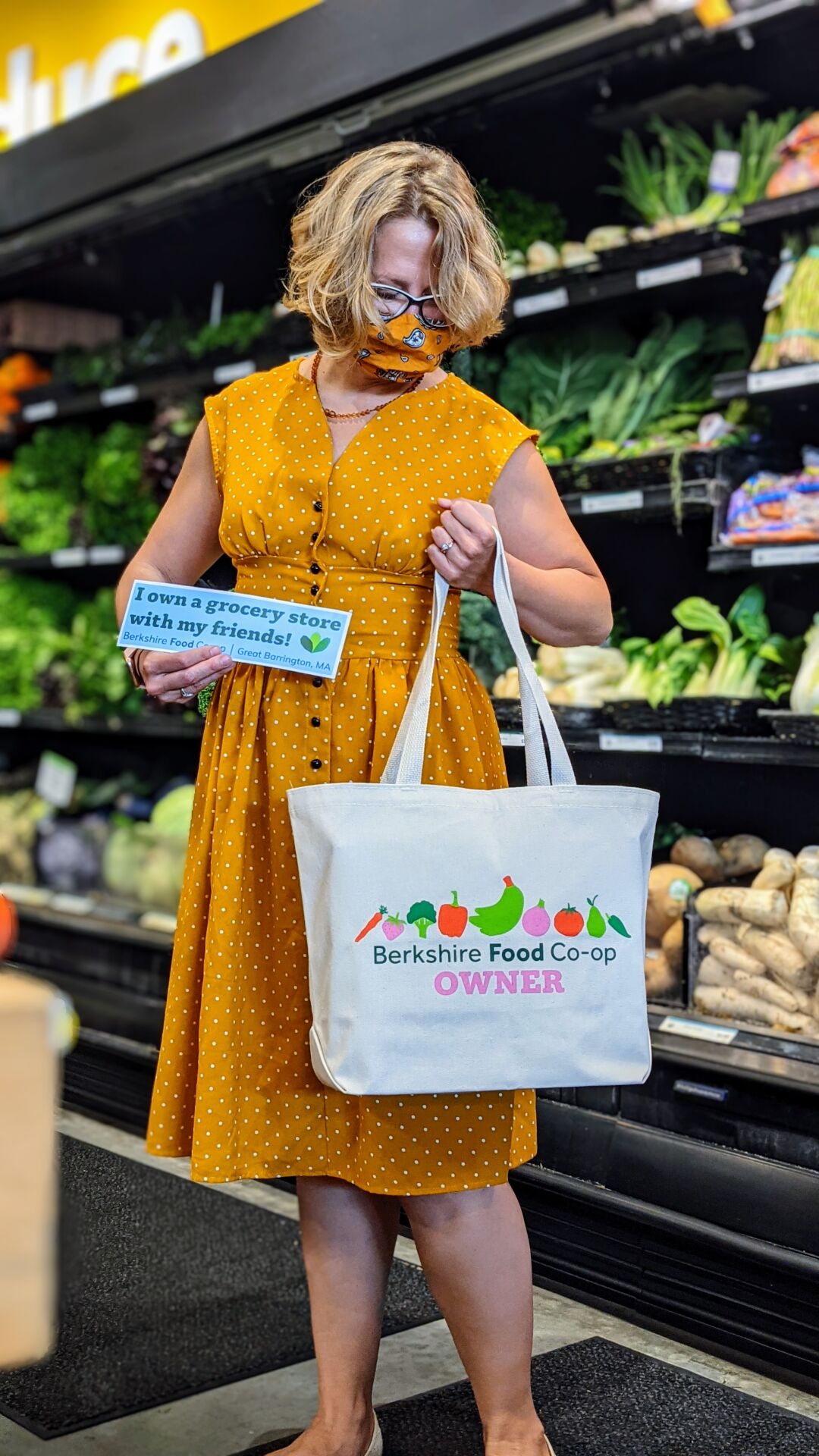 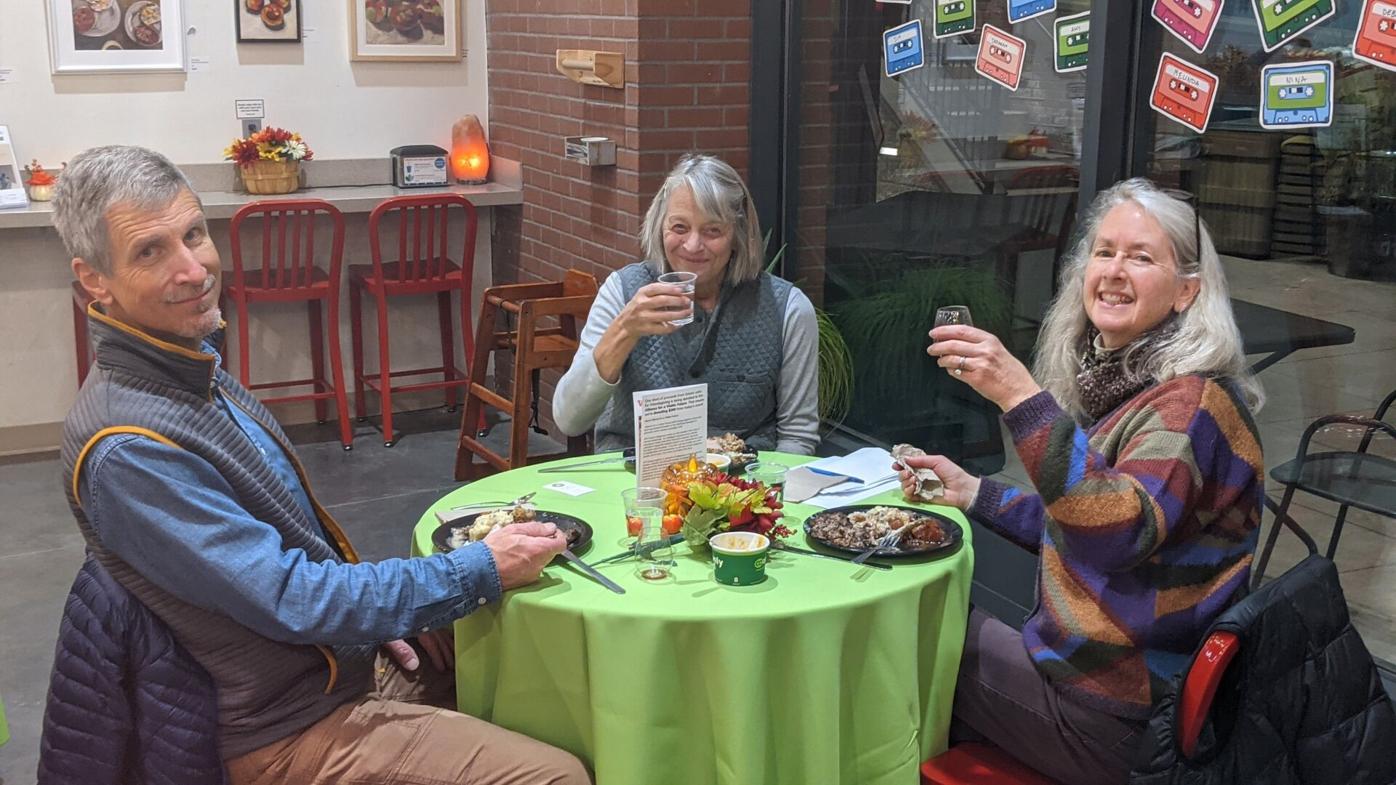 Phyllis (right), her husband (left), and another board member at Berkshire Food Co-op's Friendsgiving Feast 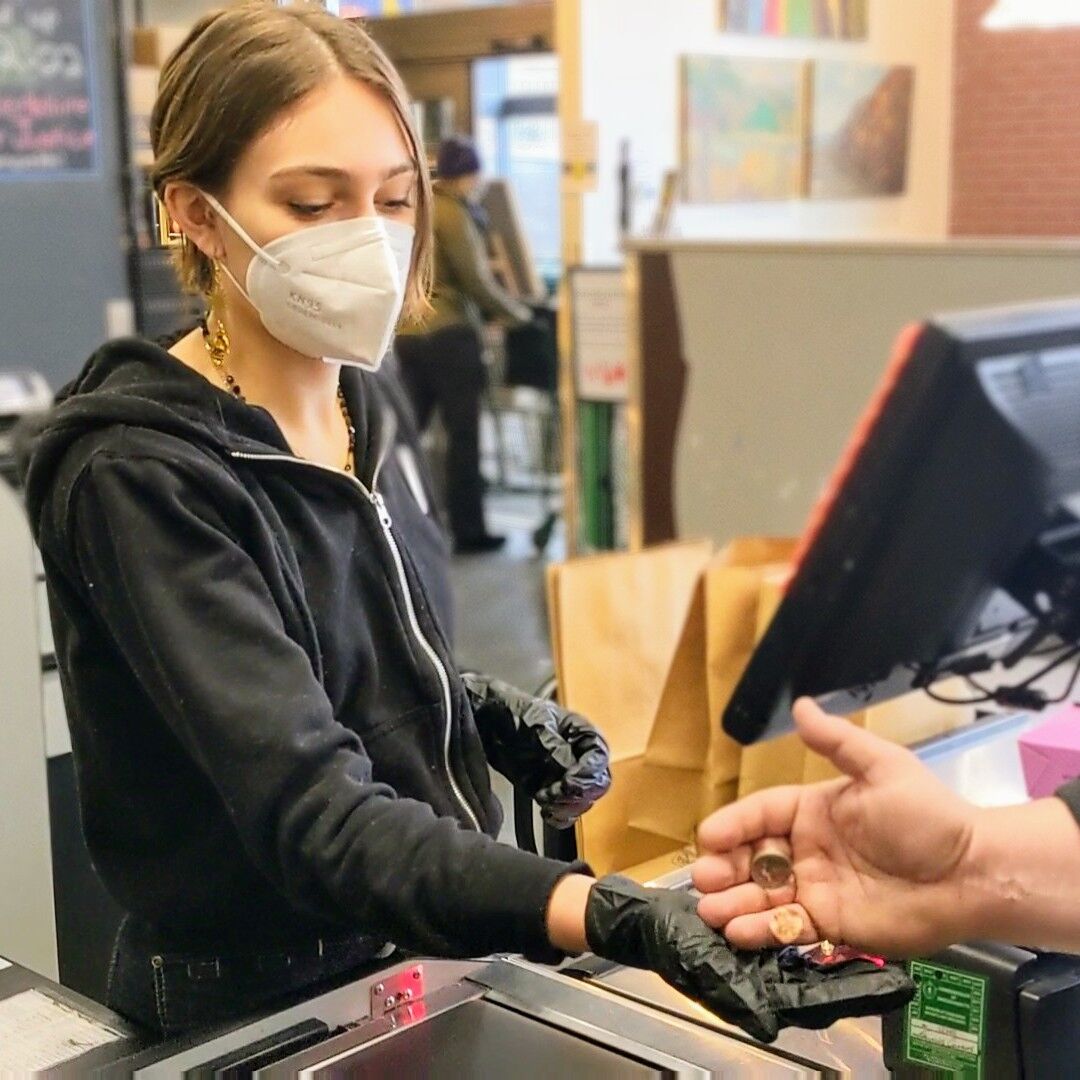 Round Up for Change at the register 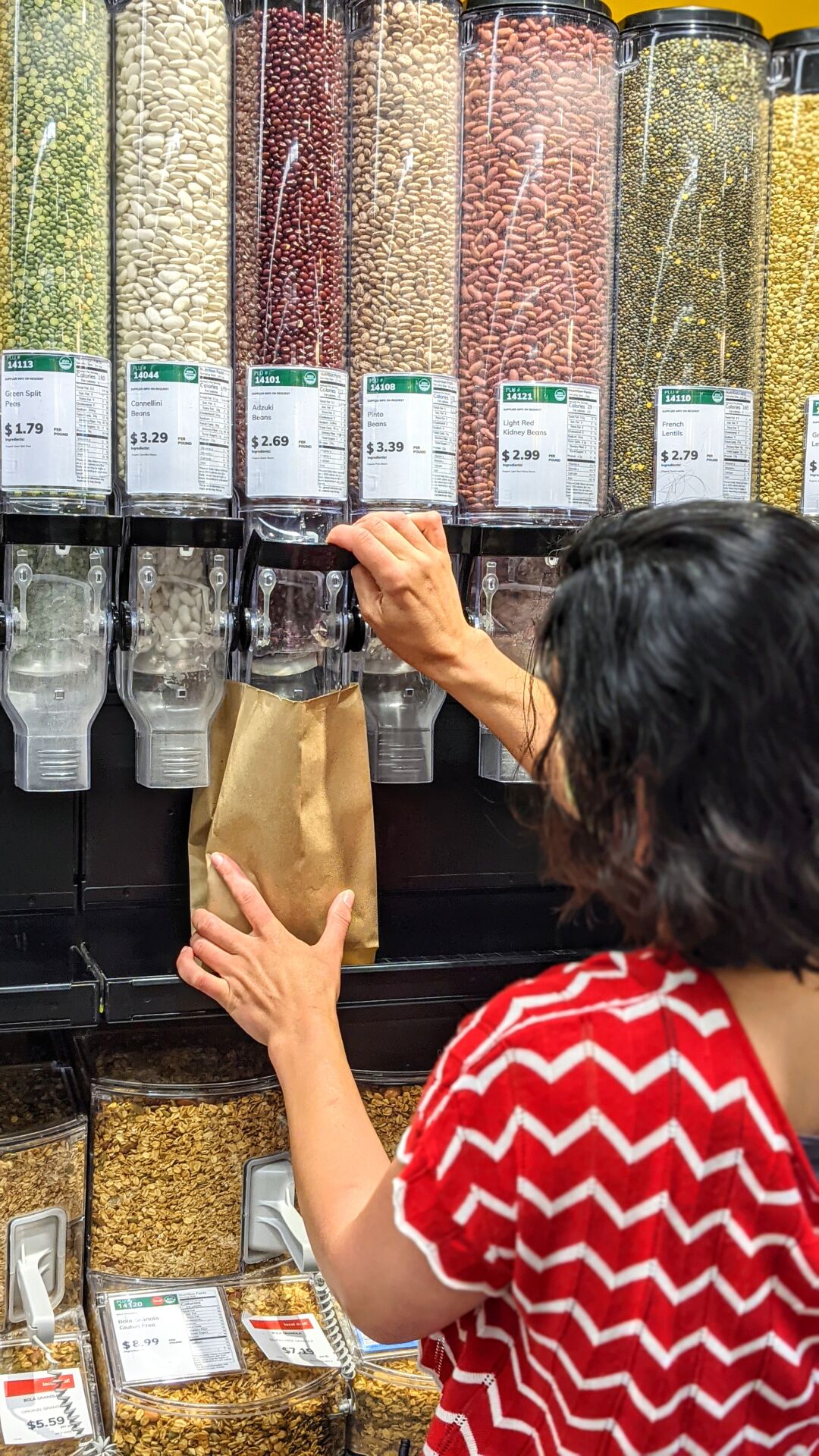 Shopping in the bulk department 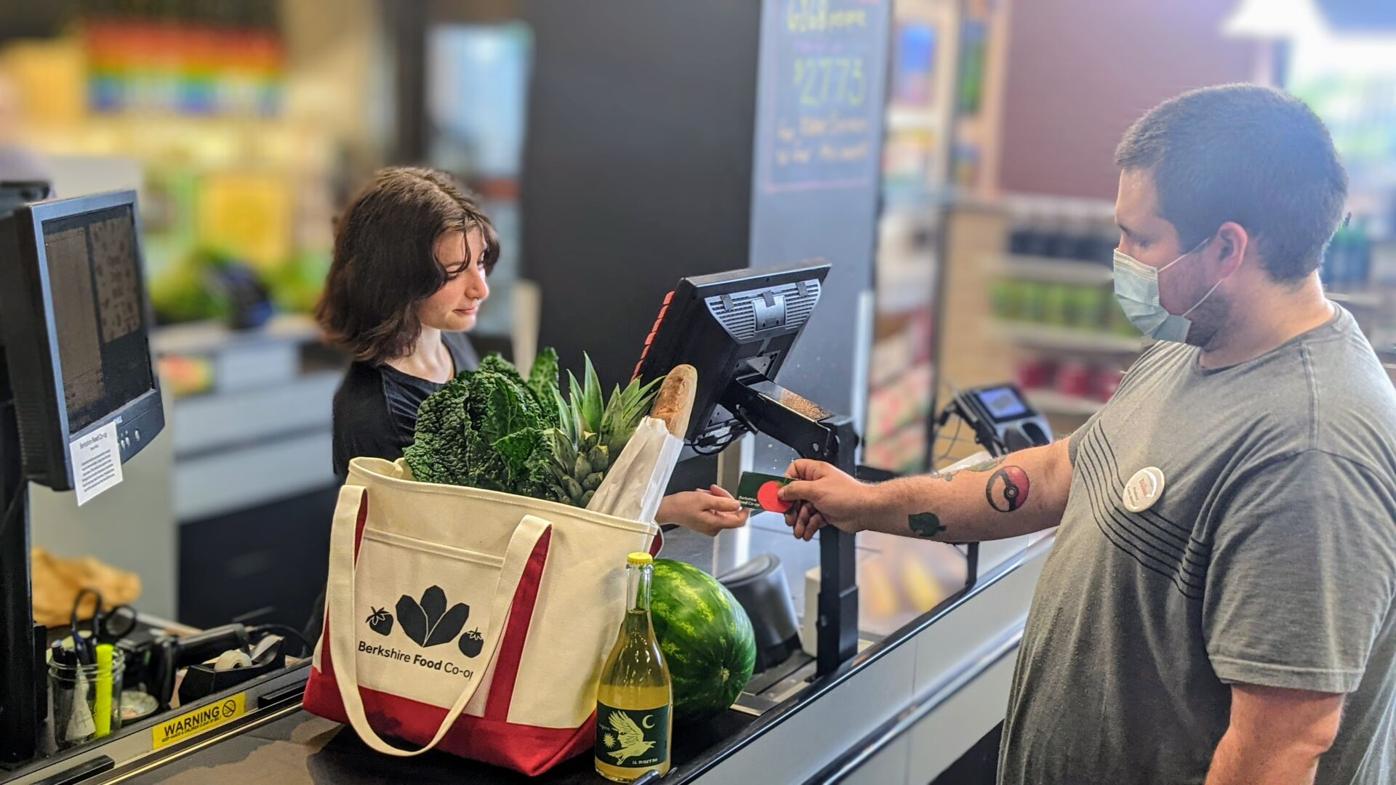 Using an Owner card at the register

Phyllis (right), her husband (left), and another board member at Berkshire Food Co-op's Friendsgiving Feast

Shopping in the bulk department

Using an Owner card at the register

It might have been the bulk aisle that brought you in. Or maybe the local produce and meat. Perhaps it was the sustainable personal products. Regardless of the reason you first stepped into Berkshire Food Co-op or Wild Oats, what kept you coming back likely was the ripple of impact generated by those purchases and the co-ops’ ownership.

Most of the money spent at these local food co-ops stays here in the Berkshires, helping to make a healthier self, community and planet, all of which inspire a deep loyalty in those who’ve shopped there over the past four decades.

“My wife and I joined the Wild Oats Co-op about 30 years ago,” Jeff Strait said. “We are not hardcore natural foods enthusiasts, but we try to eat healthy meals. We especially enjoy the fresh produce, the bulk grains and nuts and the local poultry and meats available at the Co-op.”

Recently he decided to get deeper involved in helping the co-op function and thrive. Strait joined the co-op board for Wild Oats.

“It was the early months of the [COVID-19] pandemic, and we were very uncertain about whether the store could remain open. Furthermore our general manager was leaving, so we had to look for a new GM. These were challenging times for Wild Oats, and I wanted to help,” he said.

Trying to help a spouse who had been diagnosed with Celiac disease was made easier for Phyllis Webb because she had been shopping at the Berkshire Food Co-op since 2011, when she moved to the Berkshires.

“We wondered what we would be able to eat,” she said. “After the initial shock, it was clear that we could maintain the healthy — perhaps even healthier — diets and interesting food variety we have always enjoyed [from BFC], but now wheat-free.”

With a decade of understanding how much better it is to be a part of her local food co-op, Webb is now a member of the board at Berkshire Food Co-op.

“Since small business is what drives our economy, I am thrilled to be a member of the Co-op, where many, many small local businesses are supported under one roof,” said Webb, who should know, too, because she’s the owner of the small business Magic Fluke Co., a stringed instrument manufacturer in Sheffield, Mass.

That sense of wanting to help goes the other way as well.

Both Berkshire Food Co-op and Wild Oats participate in many programs to support their communities, not just their customers.

“The Wild Oats Co-op has been a partner with the Williamstown Food Pantry, serving the community for many years,” said Carol DeMayo, founder of that pantry. “It provides a local, friendly atmosphere to shop, but it also takes an extra step to help support those in need. The Co-op has sent their extra food items to the pantry to be part of our distribution on the first and third Wednesdays of each month.”

DeMayo said that during the pandemic the pantry also received fresh produce from Wild Oats. She said she appreciates the connection so much on behalf of her clients.

“The wonderful families that we serve through the Williamstown Food Pantry are so appreciative of the fresh fruit from the Co-op,” DeMayo said. “Just last week, we were able to include bananas from the Co-op in the distribution, and so many people immediately started eating them right there! They were a treat.”

These co-ops also help their communities through their Round Up for Change programs, which generate thousands of dollars each month for local non-profit organizations.

“The Co-op plays such an important role in our community,” DeMayo said. “It is an active member in making the community stronger and kinder.”

The giving doesn’t end there. Jessy Turner said she could write books about all the reasons the Co-op is amazing. She is a program coordinator with the Berkshire Food Co-op, handling what the Co-op gives back to its community.

“We donate goods, monetary donations and gift bags to local non-profit organizations, schools and groups,” she said. “During (COVID-19) we donated to CLuB — Community Learning the Berkshires. CLuB was created through a union of area nonprofits that sought to fill in the child-care gaps during lockdown. They provided free and low-cost, education-based child care for working families. As a working parent myself, I was very sympathetic to this need. Through Real Good Giving, we donated lunch weekly for a month to the CLuB set up down at April Hill.”

She said that her favorite community activity is Berkshire Food Co-op’s Comfort and Joy Giving Tree.

“Last year we decided to start a giving tree,” Turner said. “Instead of for children, we did it for the residents at Fairview Commons [a nursing and rehabilitation center in Great Barrington].”

She had to pause a moment because she was a bit emotional.

“This is so important. especially for a vulnerable population who has had to be kept away from friends and family for long stretches of time. Just talking about it gets me choked up.”

The Comfort and Joy Giving Tree will be erected on Nov. 22, and gifts will be gathered by no later than Dec. 12.

This will give all new owner-members such as Philip Landa a chance to be a part of an even larger community outside the walls of BFC. He came into the Co-op one day randomly during a visit to Great Barrington. He marveled at the fresh produce and mentioned it to an employee, who told him that the Co-op gets its produce from farms within 50 to 100 miles.

“I was hooked,” he said. But it wasn’t the only reason that he stayed.

“What I really appreciate is that the Co-op is truly a part of the community,” Landa said. “It keeps the money it makes right here in Berkshire County. And provides jobs for our neighbors and is committed to selling products procured by local farmers and area businesses and craftspeople. As an owner, I get to vote for the board of directions, and it’s a cool way to be part of a business that’s really committed to the area.”

Keeping things local is only one of the ways that Wild Oats and Berkshire Food Co-op make a sustainable difference. A key ingredient to this sustainability is the favorite bulk aisle.

“Bulk purchases limit packaging made from single-use plastics, heavily bleached paper and other environmentally harmful materials,” said Cassandra Peltier, the bulk buyer for Wild Oats Co-op. She said shoppers are encouraged to bring their own reusable containers or use the ones available for purchase (such as BPA-free jars or bottles made from recycled glass).

“Because Wild Oats doesn’t have a minimum-purchase limit, you can buy as much or as little as you need and cut down on food waste. We also offer local, organic, ethical and domestic products as much as possible.”

Commitments of the food co-ops in the Berkshires go beyond just how a store runs and what inventory it carries, longtime loyal member-owner Strait said. “Our concerns now go beyond healthy food to include sustainability, food justice and acting as a fair employer. Members also can save money through quarterly owner appreciation discounts and a patronage rebate in years when we make a profit.”

To that end, he said that anybody can shop at food co-ops. “You don’t have to be a member. Also, you do not have to be a devoted natural foods person. Everybody can find something of interest at the co-op,” he said.

He said that he particularly recommends Wild Oats’ mozzarella-and-pesto-chicken sandwich.

Meanwhile Webb said if you love to grocery shop like she does, Berkshire Co-op provides an attonishing experience, “I am transfixed on the fresh produce, the bulk displays, the latest from local farms or artisans,” she said.

Webb’s joy in that experience is little wonder. BFC won Best Organics in the Berkshires this year, spurred by careful selections by the entire team, including Drew White, its produce team member.

“I very much look forward in my day to buying things at the Co-op, like Gopal’s Sprouties Organic Savory Pumpkin Seeds, or Nancy’s Probiotic Cream Cheese, or the Santa Fe Bean Salad in the cooler section, or the prospect of the Organic Stinging Nettle in the bulk section,” he said.

Strait agrees, pointing to Wild Oats’ fourth consecutive victory in October for Best Produce in the Berkshires as an example of the value of fresh, local produce to its greater community.

He gave huge kudos to General Manager Neste Lytle for adding to his Co-op’s success.

“Food touches every aspect of our lives and has a lasting impact on the environment we all share,” Lytle said. “Developing partnerships and taking a values-based approach towards community improvement is essential and why I joined the cooperative movement. To say I’m honored to be here would be an understatement.”

For more information about how to get involved with either Berkshire Food Co-op or Wild Oats, you can visit their stores at 34 Bridge St., Great Barrington, or 320 Main St., Williamstown, respectively.