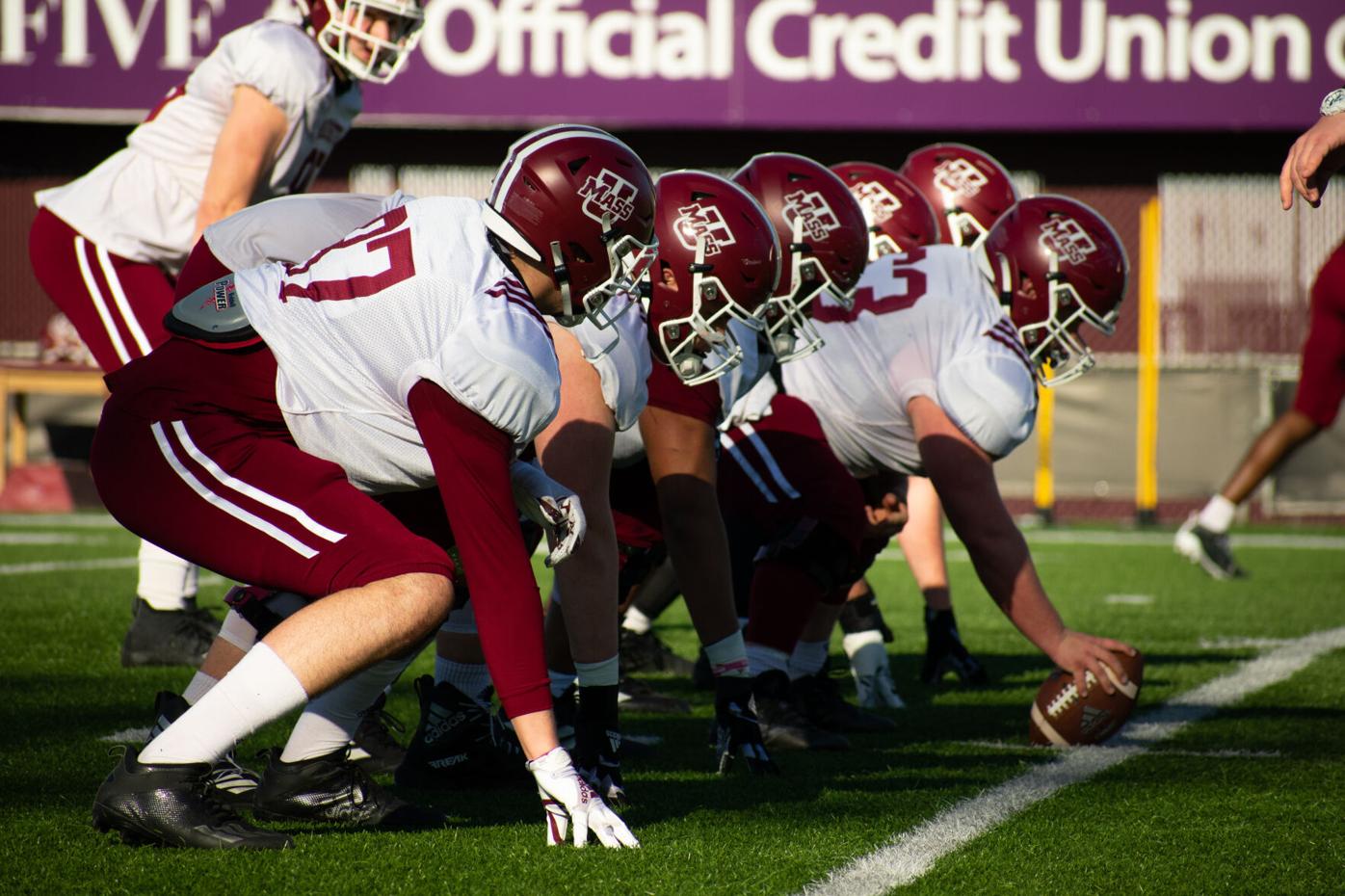 The University of Massachusetts football team was ranked 127th of 130 FBS teams by The Athletic. 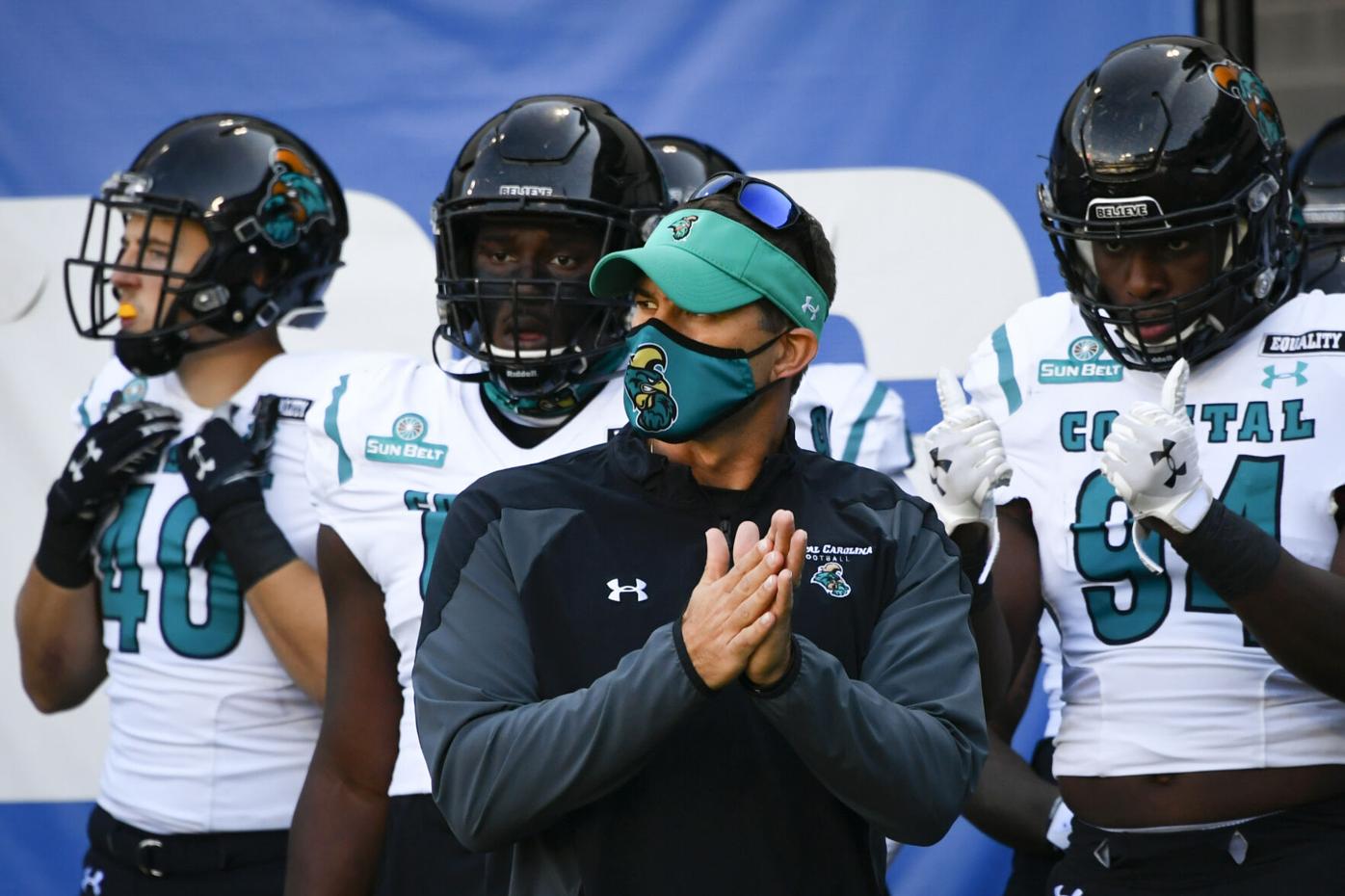 Coastal Carolina coach Jamey Chadwell waits to lead his team onto the field for a game last season. The Chanticleers are ranked 17th in The Athletic's list of every FBS team. They will play No. 127 UMass on Sept. 25.

It won’t be long now. The University of Massachusetts will hit the football field Labor Day weekend.

The Minutemen will open the 2021 season on Saturday, Sept. 4, against the University of Pittsburgh.

Head coach Walt Bell’s team is coming off a truncated 0-4 season, playing four road games in the COVID-19 season, and losing all four of them. The Minutemen have won one game in Bell’s two seasons.

For fans looking to see improvement, it could show up early and often. That improvement, however, might not manifest itself in victories.

The Athletic published a story on its website Thursday morning, placing all 130 Division I-FBS teams in descending order from No. 1 to No. 130. The top three teams, according to The Athletic, are Alabama, Clemson and Oklahoma. None of those teams appear on the 2021 UMass schedule. UMass is down near the bottom at No. 127. The teams below UMass are UConn, Old Dominion and New Mexico State.

UMass will play only three teams from a Power-5 conference, all from the ACC. That includes Pitt, Boston College and Florida State.

But the Minutemen will not have an easy go of it in 2021. Of the 10 Division I-FBS schools they are playing, seven of them are ranked in The Athletic’s Top 55.

Here’s a look at the schedule, with The Athletic rankings.

Sept. 4, at Pittsburgh — The Panthers are ranked 48th out of 130 teams. Coach Pat Narduzzi’s squad is led by QB Kenny Pickett, whose offensive coordinator is former UMass head coach Mark Whipple. This is Whipple’s second stint in Pittsburgh, as he was the quarterbacks coach for the Steelers when they beat Seattle to win Super Bowl XL in 2006.

Sept. 11, Boston College — The Eagles of coach Jeff Hafley are ranked 44th in the nation. Seven of the 14 ACC teams are listed in the top 50. The Eagles have one of the top QBs in the ACC in Phil Jurkovec.

Sept. 18, Eastern Michigan — The Eagles are ranked 109, one of five Mid-American Conference teams in the Bottom 10 of the rankings. Three teams, Northern Illinois, Akron and Bowling Green, are all ranked below the Eagles.

Sept. 25, at Coastal Carolina — The Chanticleers are ranked 17th by The Athletic, and coach Jamey Chadwell’s team brings back most of his starters from an 11-1 season. The last time UMass played Coastal Carolina was in 2019 at McGuirk Alumni Stadium. The Minutemen cut Coastal’s lead to 21-14 on a second-quarter touchdown run by Bilal Ally. But Coastal scored three touchdowns in the last six minutes of the second quarter, and that was that.

Oct. 2, Toledo — The Rockets just missed out being in The Athletic’s Top 50, as they are ranked 51st. Toledo is the No. 2 ranked team in the Mid-American Conference, with Ball State ranked 38th by The Athletic. Toledo is picked to finish second behind Ball State in the MAC’s West Division.

Oct. 9, UConn — The Minutemen will face their rivals from the Nutmeg State as the slightly higher-ranked team by The Athletic. UConn is ranked 128th, one of the final three teams in the 130-school list, primarily because coach Randy Edsall’s club did not play football in either 2020 or spring 2021. The last time UMass and UConn met was 2019, and the Huskies scored 21 unanswered points in the second half in a 56-35 win.

Oct. 23, at Florida State — The Seminoles have fallen into a rough patch — for them. FSU was 3-6 last year, and that contributed to the school being ranked 54th by The Athletic.

Oct. 30, at Liberty — Coastal Carolina might be the highest-ranked opponent in The Athletic’s Top 130, but the Liberty Flames might just be the best team UMass is going to play in 2021. Coach Hugh Freeze’s Flames are ranked 21st, and bring back QB Malik Willis. Willis accounted for 286 of Liberty’s 629 yards in total offense in last year’s 45-0 win over UMass. He threw for three touchdowns and ran for another. Willis is expected to be one of the top QBs taken in the 2022 NFL Draft.

Nov. 6, vs. Rhode Island, and Nov. 13 vs. Maine — Two FCS teams show up on the schedule and are not ranked by The Athletic. Rhode Island is the preseason No. 6 team in the CAA, while Maine is ninth.