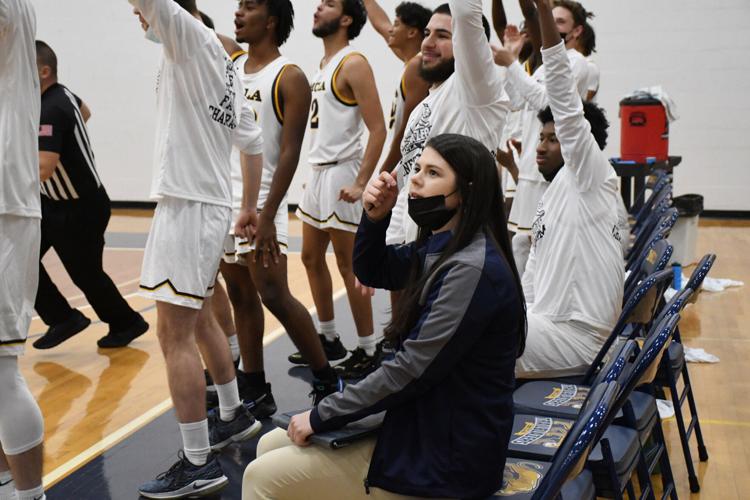 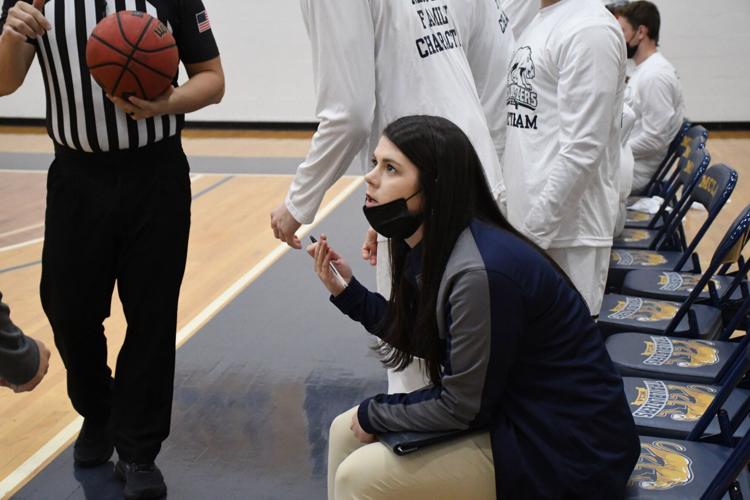 MCLA basketball Asst. Coach Courtney McLaughlin speaks to the team during a time out during a basketball game against Castleton on Friday. 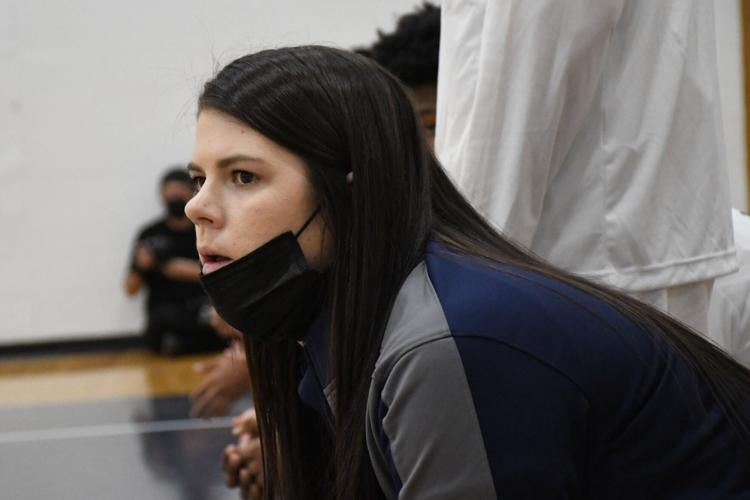 NORTH ADAMS — Courtney McLaughlin has been a familiar face around the Amsler Campus Center Gymnasium since she first arrived on the MCLA campus for the 2013-14 season.

However, even after so many years, she’s in a new space in North Adams.

McLaughlin, a Pittsfield High School graduate who played and graduated from MCLA is now in her fourth year as an assistant coach at the school. She has, however, moved over from the women’s team to the men’s team, where she’s Derek Shell’s assistant.

“It doesn’t feel a lot different than [coaching] the women,” McLaughlin said. “[Practice] is faster, it’s a little more intense. But so far, I’m really enjoying it.”

McLaughlin played three seasons for Holly McGovern and one season for Loren Stock, all with the Trailblazers. In McLaughlin’s senior year, she averaged 12.2 points and 2.3 steals per game. She scored 16 points in the MASCAC semifinals in her senior season, but the Trailblazers lost to Framingham State 60-59.

The MCLA men are currently 0-2, and have a Saturday date in Nashua, N.H., against Rivier. The Trailblazers return to Amsler Monday night to play Northern Vermont-Johnson.

MCLA men’s coach Derek Shell said that she is the second McLaughlin family member he’s had on his bench. Her older brother Kris, another former Pittsfield High School basketball standout, played for Shell and coached with him for a time.

“He played for me at Fitchburg for a year, and when I came up here, he was an assistant for a couple of years,” Shell said. “When Coach Stock left and we tried to do something with both the men’s and women’s teams last year, a modified-type practice. Courtney was still around and she still wanted to coach. She and I joined forces for the men and the women during those limited sessions. As we continued to talk, we realized she would be a good fit for the men, if she was interested in doing it.”

For her part, McLaughlin said the move to the men’s bench was one she looked forward to.

“I was extremely excited,” she said, prior to the season opener against Castleton last week. “I was looking forward to a new opportunity and to be able to learn from a new coach. He’s obviously great and I’ve learned a tremendous amount so far. I enjoy working with him a lot.”

The coaching during the pandemic season was as much conditioning and skills instruction as it was running plays and the like. That helped her transition into the new job with the men’s team.

“He had asked me if I wanted to participate, volunteer-based, to help out during COVID. Of course, I just love being on a basketball court,” she said, “so it was a no-brainer for me. I think that led to a relationship we built, and now we’re working together, so it’s been great.”

It might be basketball, but the coaching is somewhat different. McLaughlin has not only had to learn how the head coach works, but the differences in the playing philosophies.

“I’m adjusting to a new style of play and things like that. But other than that, it’s been a pretty easy transition,” she said.

Women coaching in men’s programs are few and far between. Perhaps the most notable of those women was Bernadette Mattox, who was an assistant at Division I Kentucky from 1990-1994, when she worked under Rick Pitino. Mattox later went on to become the head women’s basketball coach at Kentucky, and she worked in the WNBA with the Connecticut Sun.

The most recent woman to work on a men’s team in Division I was Edniesha Curry, who was an assistant at the University of Maine from 2018-21. She’s now on Chauncey Billups’ staff with the NBA’s Portland Trail Blazers, one of seven women assistant coaches in the NBA.

McLaughlin is the only woman on a men’s staff in MASCAC.

“It’s always going to be basketball at the end of the day, so that’s how I try to think about it. I’m glad that women are making their way onto the staffs of men’s teams,” she said. “I guess I don’t think too much about it right now.”

Shell said he understands the bigger picture of women working on men’s basketball team staffs, but Shell — in his sixth season, including the pandemic-shuttered 2020-21 season — said it’s really about basketball.

“I know it’s boring, but it’s all about basketball,” he said. “She has a passion for the game. She, obviously is invested in this institution. She’s been a part of it for probably going on the better part of a decade now as a student, player and coach now. It really is just basketball.

“I hate for that to be the lead story because she’s a hell of a coach and she’s really going to be a good one down the line.”