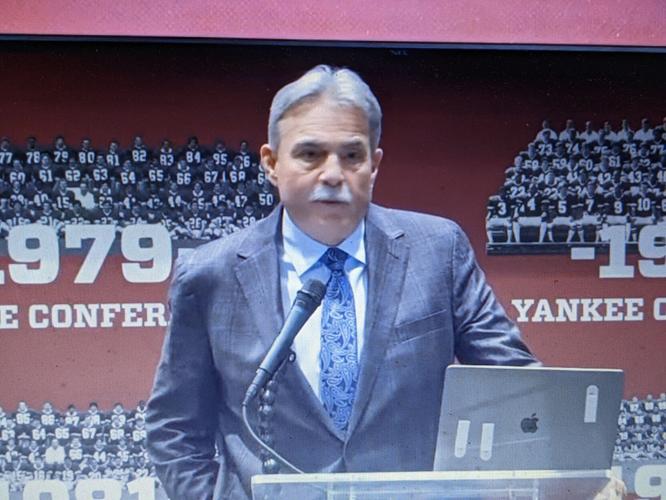 UMass football coach Don Brown speaks to reporters during a video conference on Wednesday. Brown has signed a five-year contract to take over for Walt Bell. 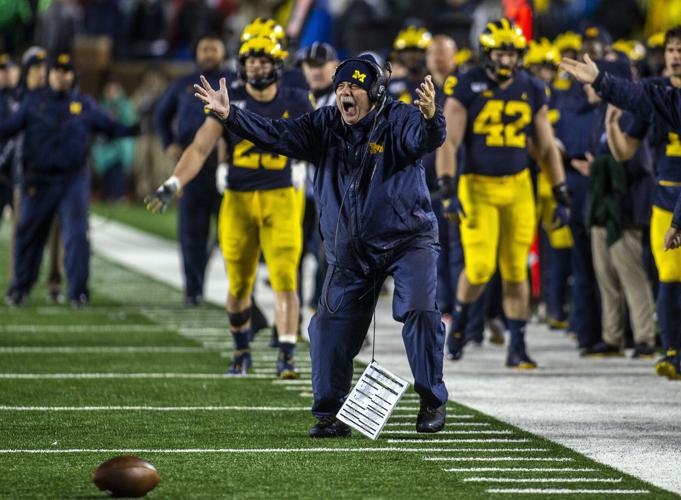 In this file photo, Michigan defensive coordinator Don Brown reacts from the sideline in the third quarter of a game against Notre Dame in Ann Arbor, Mich., Saturday, Oct. 26, 2019. Michigan won 45-14. 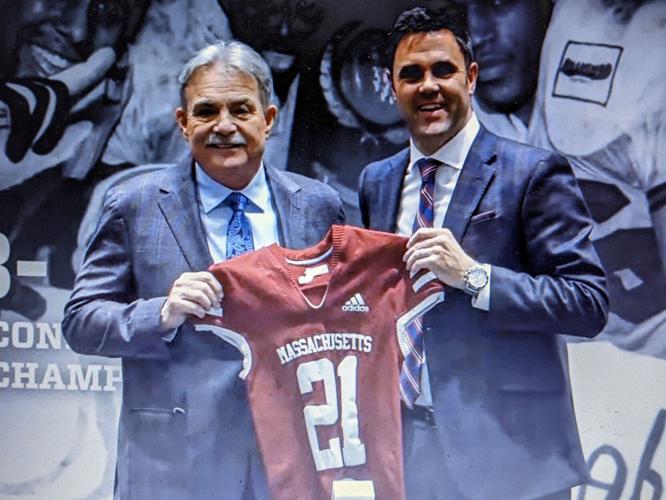 UMass football coach Don Brown speaks to reporters during a video conference on Wednesday. Brown has signed a five-year contract to take over for Walt Bell.

In this file photo, Michigan defensive coordinator Don Brown reacts from the sideline in the third quarter of a game against Notre Dame in Ann Arbor, Mich., Saturday, Oct. 26, 2019. Michigan won 45-14.

“I’m a challenge guy,” Brown said. “I love challenges. With this one and me having such a strong affinity for this university on this campus, money wasn’t an issue. This was a place that I feel very strongly about and obviously, I feel like I can make a difference.

“Nobody was going to stop me from doing it.”

Brown, who was defensive coordinator under Mark Whipple when UMass won the NCAA Division I-AA national championship in 1998 and was the head coach from 2004-08, a tenure that included a trip to the I-AA title game, met with reporters on Wednesday to signal his return to Amherst.

“Sometimes, you’ve got to go away, a long way from home, to realize where you belong,” Brown said. “This particular opportunity, it was just the right time and I was just fortunate that I was in the right place. The challenges that are in front of us, I’m just excited about.

“The one thing I feel strongly about is my passion for the University of Massachusetts and its players.”

Brown’s Arizona team went 1-11 in 2021, but the Wildcats were at or near the top of the Pac-12 Conference defensive rankings. The Wildcats were third in the conference in pass defense, and 25th in the nation. Arizona was also sixth in the Pac-12 in total defense, the best ranking since 2010.

Brown is a five-time nominee and a 2016 finalist for the Broyles Award, which is annually awarded to the nation’s top assistant coach. Over the last decade, 29 defensive players who played under Brown have been selected in the NFL Draft.

This is the second time UMass has brought a former coach back. Prior to Bell, Whipple returned to Amherst. Whipple, who led the Minutemen to the national championship before heading to work for the NFL’s Pittsburgh Steelers, coached the FBS Minutemen from 2014-18. Brown was Whipple’s defensive coordinator.

UMass athletic director Ryan Bamford, in an interview with The Eagle, was asked specifically if he had any qualms about Don Brown 2.0.

“No, not at all,” Bamford said. “I think each situation is unique. I’m very confident, in obviously Don’s skill set, but also in his fire and passion and desire to build our program into a winning one at the FBS level.”

It’s a five-year contract for Brown with total compensation of $800,000 per season. It’s a combination of salary and deferred compensation, with what the athletic director described as a robust bonus package. In addition, Bamford said that the salary pool for the assistants on Brown’s staff has risen by about $500,000. Bell’s staff budget was $2.4 million and Brown’s will be in the neighborhood of $3 million.

“I contacted Don within the first week after we made the coaching change. He and I stayed in contact, really every day through today,” Bamford said. “We talked almost every day. We ended up coming to an arrangement just before he went into the final week at Arizona. It was about a week to 10 days that we discussed the opportunity. I had interviewed some other folks as well, but I really started my conversations with him first.”

The UMass AD said that despite the recent lack of success at UMass — two wins in three seasons — there was no lack of interest in the position. He said that some of the people who called with interest were some of the same people Bamford approached three years ago and were not interested at that time.

“We had more interest this time around than we did three years ago. We had a lot of really good coaches interested in our opportunity,” Bamford said. “I was very pleasantly pleased with that. I think people see that some of the work that we’ve done in the last three years, and while we haven’t had the competitive success that we desire, I think we put some things in institutionally and we’ve made some investments in our program that will yield competitive success in the future.”

One announcement that Brown did make during his Wednesday press conference is that offensive line coach Alex Miller, who assumed the interim head coach role when Walt Bell was fired after the Minutemen lost to Rhode Island, will be on the staff. Miller, who was hired by Bell to coach the offensive line, played three years under Brown at UMass.

“Alex Miller, who was my captain back in ‘06, has done a tremendous job and obviously was my first hire here,” Brown said. “I couldn’t be more excited to have him with me.”

Brown and Miller spent much of the beginning of the week hitting Massachusetts high schools and prep schools on recruiting visits. Brown has also reportedly told those recruits who had verbally committed to UMass that their scholarship offers still stand.

The new coach said that those players are just a start, as he looks to re-establish a New England recruiting pipeline to Amherst.

After Don Brown's introductory press conference this week at UMass, columnist Howard Herman looks deeper at the new, old coach's first impressions and gets the take from a local high school coach familiar with Brown's style.