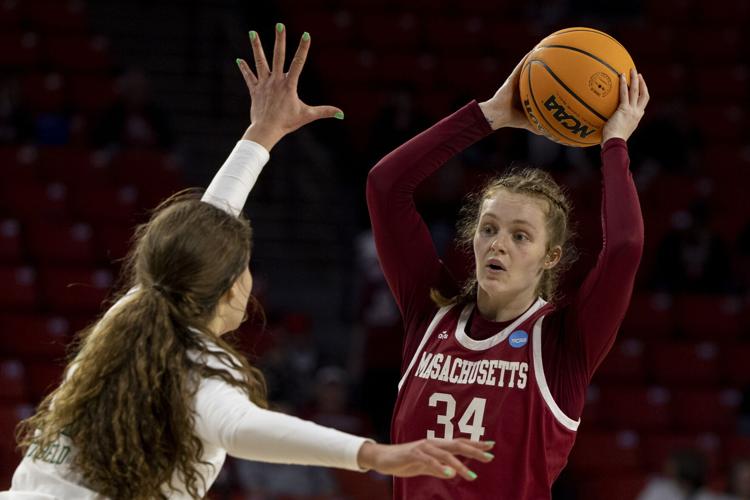 UMass forward Sam Breen passes around Notre Dame forward Maddy Westbeld during the second half of a first-round game in the NCAA women's college basketball tournament Saturday, in Norman, Okla. Breen had 31 points, but UMass dropped an 89-78 decision. 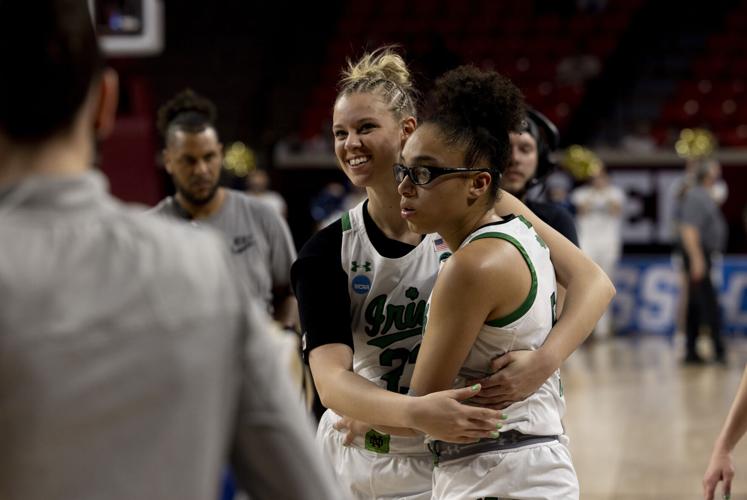 UMass forward Sam Breen passes around Notre Dame forward Maddy Westbeld during the second half of a first-round game in the NCAA women's college basketball tournament Saturday, in Norman, Okla. Breen had 31 points, but UMass dropped an 89-78 decision.

The sting won't go away anytime soon. Neither will the feeling of accomplishment.

"I think that this isn't going to be our [only] time here. We'll definitely be back. I think our team, I don't know, we're — most people are returning," UMass forward Sam Breen said in the press room after Saturday night's NCAA Division I Tournament first-round game in Norman, Okla.. "Next year is going to be a really good year obviously. But yeah, we'll definitely be back. We have a lot of talent on our team, and just working with that and developing our game even more."

Breen tied her career-high with 31 points, but it wasn't enough. Notre Dame jumped out to a 15-point lead after one quarter and never trailed, as the No. 12-seeded Minutewomen dropped an 89-78 decision to the No. 5 Irish, in the first game of a tournament doubleheader at the University of Oklahoma.

"I think that, one, this experience today, this game today, you know, I mean it's something that you grow from," UMass coach Tory Verdi said in his postgame press conference. "And it is really hard to get here, first of all. Like that's what people have to understand. It's really hard to win a championship as well."

With the win, Notre Dame (23-8) advances to play Oklahoma in Monday's second-round game. The Sooners knocked off IUPUI 78-72.

While it was a wire-to-wire win for the Irish, with the exception of a three-minute period in the first quarter, it was practically an even game, with two heavyweights tossing haymakers.

But when Breen scored to cut the Notre Dame lead to 17-11, things took a decided turn, and not in a good way for the Minutewomen.

Over the next three minutes, Notre Dame went on a 13-2 run. The only basket for UMass was Breen scoring on a put-back.

"I feel like they just shared the ball really well," UMass guard Sydney Taylor said. "Got us in rotation a lot and hit the open man like in the skip passes. We were just a little late closing out, helping on the weak side. And just, you know, we just — but we just like — we knew what we had to do."

Notre Dame freshman Olivia Miles, who had a triple-double with 12 points, 11 rebounds and 11 assists, put an exclamation point on the run with a three-point play. Miles was running the Irish offense like a swiss timepiece.

"The first half, especially the first period, we just did a lot of things that were uncharacteristic of who we were. And, you know, they kind of hit us right off the bat. And you know, we were on our heels. And I just thought that defensively we were dysfunctional at times. You know, but you got to give Notre Dame credit for attacking us," Verdi said. "I thought Miles did a great job of splitting us on the on-ball screen action and attacking downhill. And, you know, we didn't do a great job of hedging on ball-screen action. So they got us in rotation. And gave them high-percentage shots. And lastly, we didn't box out and rebound.

"And we knew that we needed to match their physicality here tonight. And it goes for all five players on the floor. Everyone needs to — I mean it doesn't make sense when you have four people boxing out and then one person just standing and watching and then we give up second chance opportunity points."

The Minutewomen trailed 32-17 after one quarter, in large part, because Notre Dame shot 12 for 19 from the field in the opening frame.

In the second, the UMass deficit bounced between 10-15 points, until a 7-2 run to end the half. Breen put the exclamation point on the run when she banked in a half-court shot at the buzzer. She had 19 points at halftime, while Taylor had 10. For Notre Dame, Dara Mabrey had 12, Maya Dodson had 10 and Miles had 8.

UMass did make it a two-possession game in the third quarter on back-to-back hoops by Ber'nyah Mayo and Breen. Breen's was a 3-pointer that made it 58-52, with 3:33 to play in the stanza. It was, however, as close as the Minutewomen were able to get.

Heads may have been hung for a while. Ultimately, however, it was a season of accomplishment for UMass.

"I'm super excited about this team. I'm super excited about what we have returning," Verdi said. "At the end of the day, we need to continue to work harder, and we need to continue to be different than we were this year. And this year we were — we were good, there is no question about that. We did some amazing things. But if you want to take that next step, you need to be different the following year."