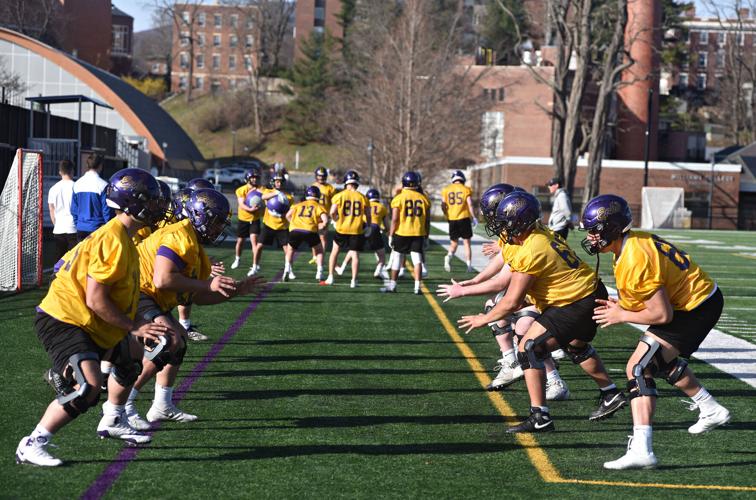 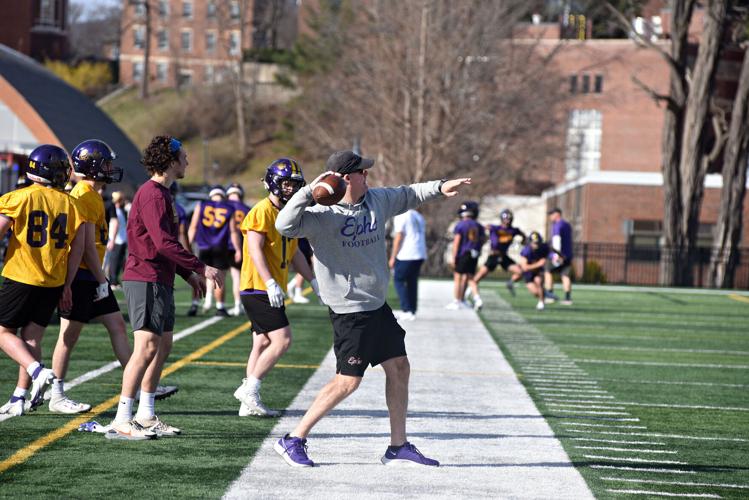 Williams College football coach Mark Raymond works with his team during a spring practice on Monday. 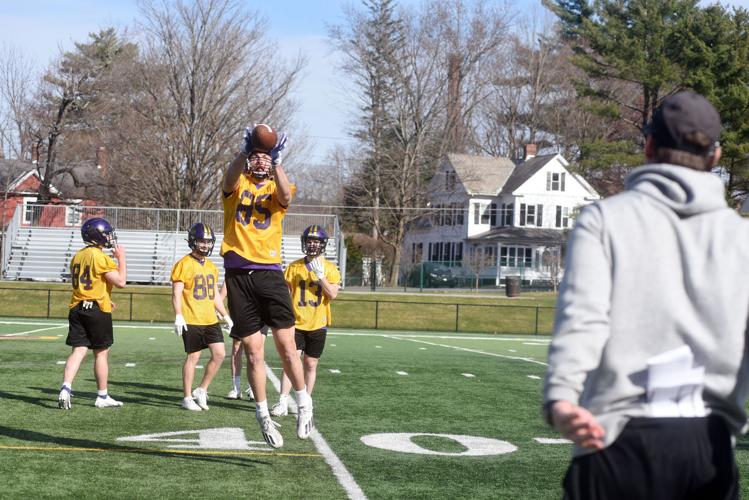 Will Loffredo catches a pass from head coach Mark Raymond on Monday afternoon.

Williams College football coach Mark Raymond works with his team during a spring practice on Monday.

Will Loffredo catches a pass from head coach Mark Raymond on Monday afternoon.

WILLIAMSTOWN — The sounds echoing from Farley-Lamb Field were the sounds of practice, which isn’t surprising at Williams College this time of the year.

What was surprising is that making those practice noises were members of the Williams College football team.

“It’s good that we’re out here. I’m glad,” Williams running back Dan Vaughn said. “I think everyone was getting antsy to get on the field and start doing stuff.

“Everybody’s excited to be out.”

The New England Small College Athletic Conference (NESCAC) approved a plan that, for 2022, the 10 football-playing members of the conference could hold non-contact spring drills. The decision was made in reaction to COVID-19 pandemic issues. COVID had caused the 2020 season to be canceled, and some very limited non-padded activities had been scheduled.

Currently, Williams and the rest of the football schools have either just begun or are in the middle of a 14-practice schedule. Different schools had different schedules due to field usage and the like. Amherst, for example, has been at it for a couple of weeks. The Mammoths have had several practices that start before 7 a.m. For the most part, Williams will practice in the late afternoon or early evening, depending on the needs of the Eph lacrosse teams that also call Farley-Lamb home.

“It felt good” to be back out on the field, said Williams coach Mark Raymond, adding that it was a little bit different to be putting his players through their paces.

It’s a Williams team that in 2021 went 9-0 for the first time in school history and won the NESCAC championship. It was the first undefeated season in more than a decade, as Williams went 8-0 in 2010.

It was not a full Williams team on the turf Monday, as there are several Ephs who are participating on one of the school’s spring sports. A couple of other Ephs, running back Joel Nicholas and defensive lineman Ian Devine, were in sweats still recovering from off-season medical procedures.

Nicholas had rotator cuff surgery on both of his shoulders, which is what is keeping him on the sideline. The junior ran for 750 net yards and scored 16 rushing touchdowns to earn All-NESCAC first-team honors in the fall.

“I already know I’m going to be in the best shape of my life come fall,” said Nicholas. “I was only operating at 70 percent of my potential last season. Once I get my body back in order, I’m prepared to go out there and tear it up.”

The players were decked out in the gold jerseys for offense and purple for defense. In full padded practices, quarterbacks wear red, so defensive players know not to hit them. On Monday, and for the 13 remaining practice sessions, there is no hitting so there’s no need to have quarterbacks in red.

“Today, everyone got to the field 45 minutes to an hour early. I think that was kind of an indication that everyone was excited,” Vaughn said. “I’m just getting into the playbook and learning the system, because we’re putting some new stuff in. There’s a lot of work to be done.”

The Williams coaching staff will be busy this spring and summer looking to fill a number of open positions. Four of those openings were first-team All-NESCAC picks. One of them, quarterback Bobby Maimaron, was the NESCAC player of the year.

“The goal is to get the young guys some reps, which they didn’t get in the fall,” said Raymond. “Get them in the mix, evaluate them to an extent. More importantly, just work on fundamentals and work on creating a new team. There is obviously, inherently, some evaluation going on. But as far as jobs being won or lost, nobody’s going to win a job coming out of here.

“We’re not in that competitive mode. We just want to evaluate guys and see what we have to work on.”

While practice is going on, Raymond is trying to finish up rebuilding his staff. Tom Blumenauer, who has been at Williams since Raymond came in 2016, is now the head coach at Division III Franklin & Marshall. Joining Blumenauer in Lancaster, Pa., is Leondre Simmon, who also came to Williams with Raymond and Dan Hunt. Hunt, the former head coach at Division I-FCS Colgate, came to Williams in 2021 as the running backs and tight ends coach.

“We’re in the process of doing some interviews,” Raymond said. “We hope to have it buttoned up in the next couple of weeks. We have some good candidates.

“We’re sorting through them and looking forward to talking to some of the guys.”