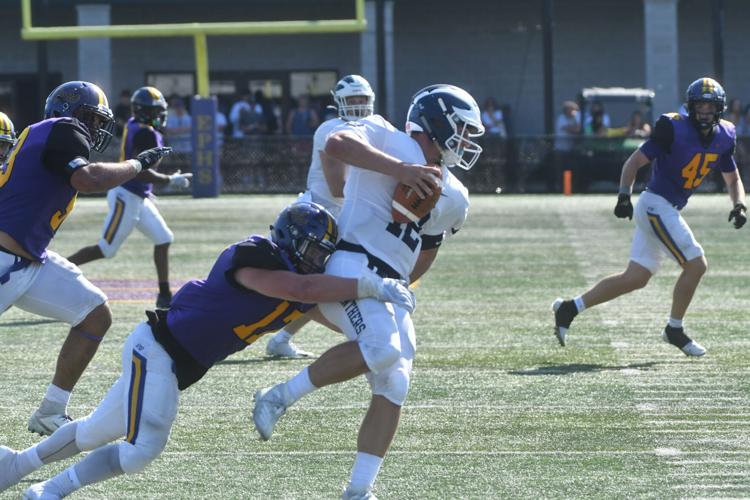 Williams linebacker Jarrett Wesner, shown sacking Middlebury quarterback Will Jernigan during the season-opener in Williamstown, returned to the lineup last week and had a big game against Wesleyan. 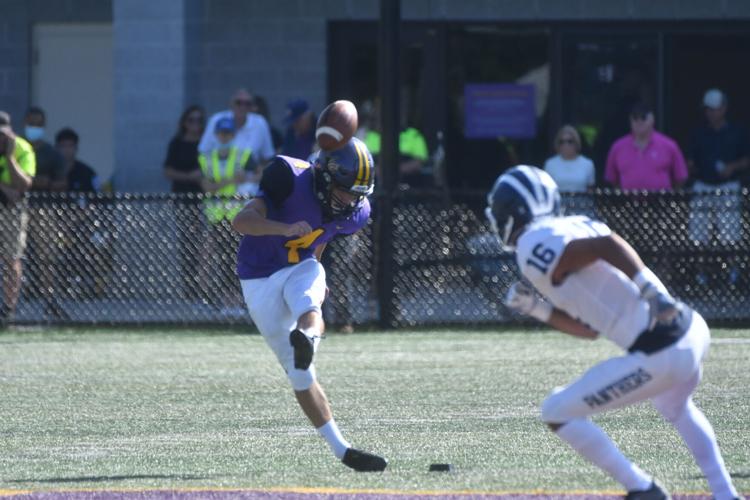 Williams first-year kicker Ivan Shuran is the NESCAC Special Teams Player of the Week. It is the second time Shuran has received the honor.

Injured back in Week 1, and on the sideline for the next six weeks, Williams linebacker Jarrett Wesner made quite an impression in his return to football last week.

The senior linebacker from Villa Park, Calif., made his first start Saturday since the opener against Middlebury. All Wesner did was make seven tackles, five solo, and had one of six Eph pass breakups in Williams’ 25-0 win over Little Three rival Wesleyan.

“It’s special,” to be back on the field, Wesner said after the Ephs had walked up Spring Street following the Little Three win. “I can’t describe the feeling. I wanted to be back, not just for myself but for the team and just to be in this atmosphere.

“I’m so lucky and so grateful.”

Wesner made the stop on the first play from scrimmage by Wesleyan, a run by quarterback Ashton Scott. Scott is more of the passer in coach Dan DiCenzo’s offense, but Wesner hit him at the line and Scott gained only two yards.

After the opener against Middlebury, Wesner seemed poised to be on a first-team, All-NESCAC trajectory and possibly a Defensive Player of the Year run. He had 10 tackles, six solo, in the 41-13 win over Middlebury. He had two tackles for loss and two sacks against the Panthers, a team that had gone 9-0 in 2019.

“We knew coming into the game that if we did our job, we would be here today,” Wesner said of the walk. “That was the most important thing.”

Standings WatchAt 8-0, Williams is the only team in NESCAC that can finish up with a perfect record. A win would also guarantee Mark Raymond’s team its first NESCAC championship since the 2010 team went 8-0.

The NESCAC title, however, remains up in the air.

That’s because if Williams loses at Amherst on Saturday and Trinity beats Wesleyan in Middletown, Conn., there will be a tie atop the standings. The Ephs and Bantams would then have identical 8-1 records. While Williams beat Trinity in the regular season, that would not matter.

According to NESCAC: “The NESCAC champion will be the team with the best conference record. In the event that two or more teams finish the season with identical conference records at the end of the season, each team will be recognized as a conference champion.”

There are no tiebreakers to win a championship. The only time tiebreakers come into play in NESCAC is to determine seeds in sports with tournaments.

Players of the Week

Trinity quarterback Spencer Fetter bounced back from his rough weekend at Farley-Lamb Field to be the Offensive Player of the Week.

Fetter was 26 for 32 for 341 yards and five touchdowns, one shy of the Trinity record, as the Bantams routed Amherst 49-7.

The Defensive Player of the Week was Middlebury linebacker Jack Pistorius, who had 10 tackles, an interception return for a touchdown and a pass breakup in the Panthers’ 28-12 win over Hamilton.

For the second time this season, Williams first-year kicker Ivan Shuran was the Special Teams Player of the Week. Shuran was 4 for 4 on field goals, while missing his first extra-point kick of the year. That kick was blocked after Bobby Maimaron’s 74-yard touchdown pass to Justin Burke on the third play of the third quarter.

For the SRO crowd at Farley-Lamb Field, Saturday’s Little Three win over Wesleyan was the game of the week. The night contest in Maine get this week’s vote.

Playing under the lights in Brunswick, Bates came in on a three-game losing streak while Bowdoin had lost two straight. Obviously, something had to give.

Bowdoin’s Andre Eden, who ran for 104 yards on 30 carries, scored his second and third touchdowns of the game on consecutive drives in the third and fourth quarters, giving the Polar Bears a 24-13 lead.

Bates took the ensuing kickoff and marched the ball 70 yards in six plays for the score, a 22-yard Brendan Costa-to-Jackson Hayes pass play. The two-point conversion failed, and it was 24-19.

A quick 3-and-out for Bowdoin forced the Polar Bears to punt the ball to the Bates 43. Costa aired one out and Christian Olivieri took it 50 yards. Two plays later, another Costa TD pass made it 25-24. The Bobcats went for two and failed again. That meant a field goal would win it for the Polar Bears.

Bowdoin marched downfield but the drive stalled on the Bates 11. With four seconds left, a 28-yard field goal attempt by Sean Mitchell was wide left, and the Bobcats had their win.

Everyone in these parts knows of the Little Three — Williams, Wesleyan and Amherst. While the three Maine teams have historically not challenged for NESCAC titles like the Little Three, the CBB battle is very similar.

Colby, Bates and Bowdoin battle for the CBB title. If the Mules beat Bowdoin on Saturday, they would win their third straight CBB title. Were Bowdoin to win, it would mark the first three-way tie for the CBB since 2011.