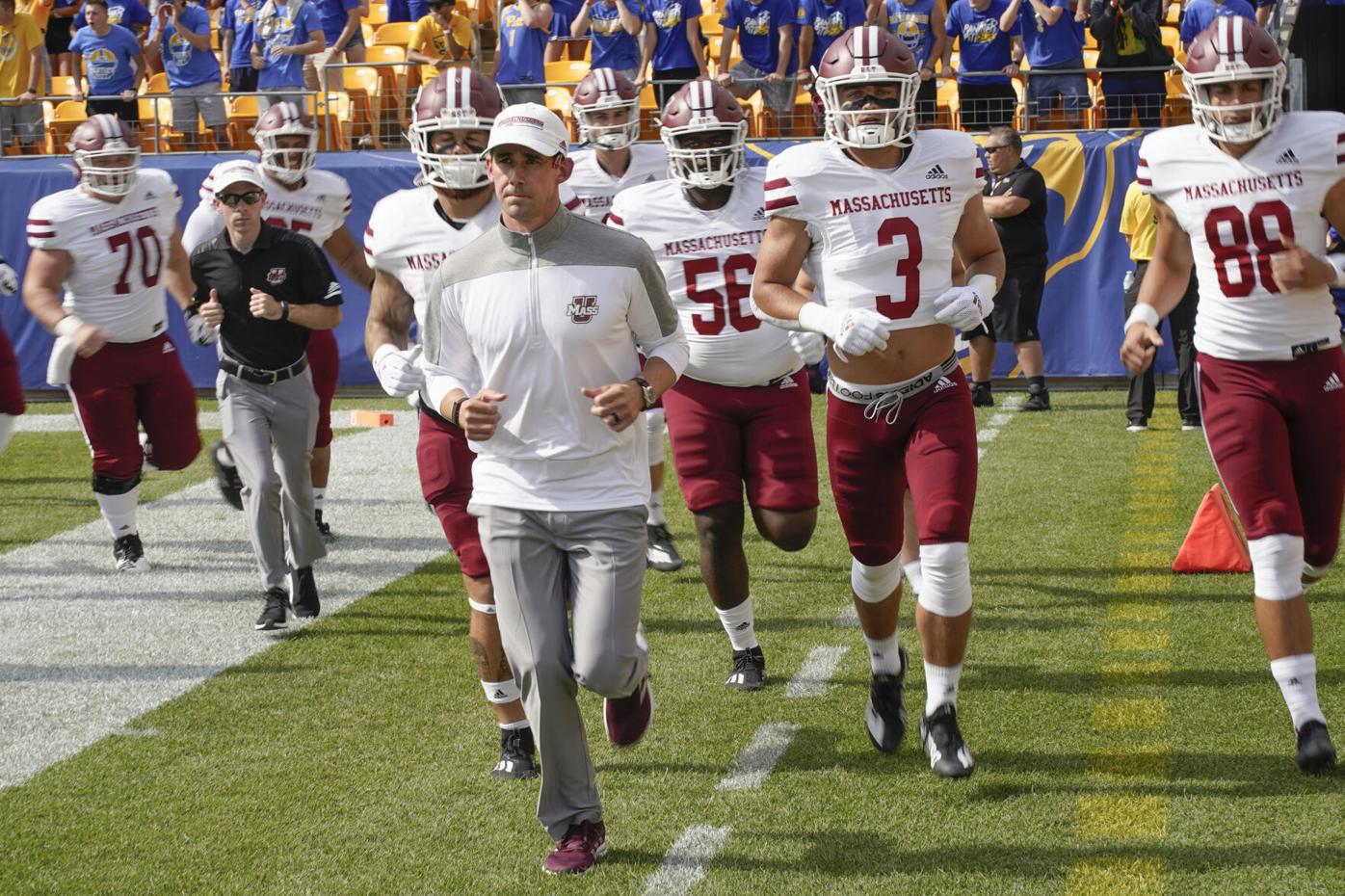 Massachusetts head coach Walt Bell leads his team onto the field to play against Pittsburgh on Sept. 4. For the first time since November, 2019, Bell will lead the Minutemen onto the field at McGuirk Alumni Stadium on Saturday when UMass hosts Boston College. 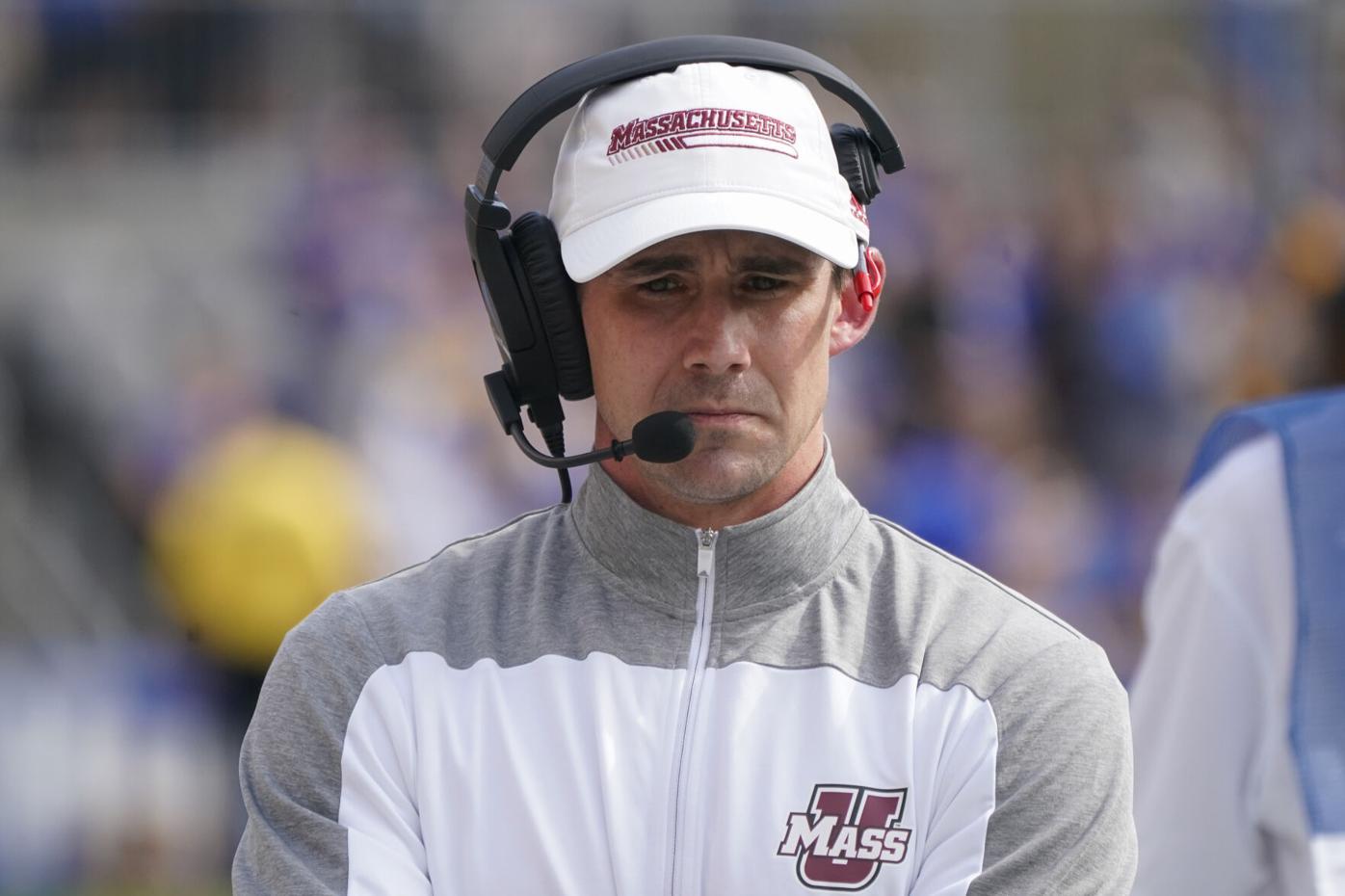 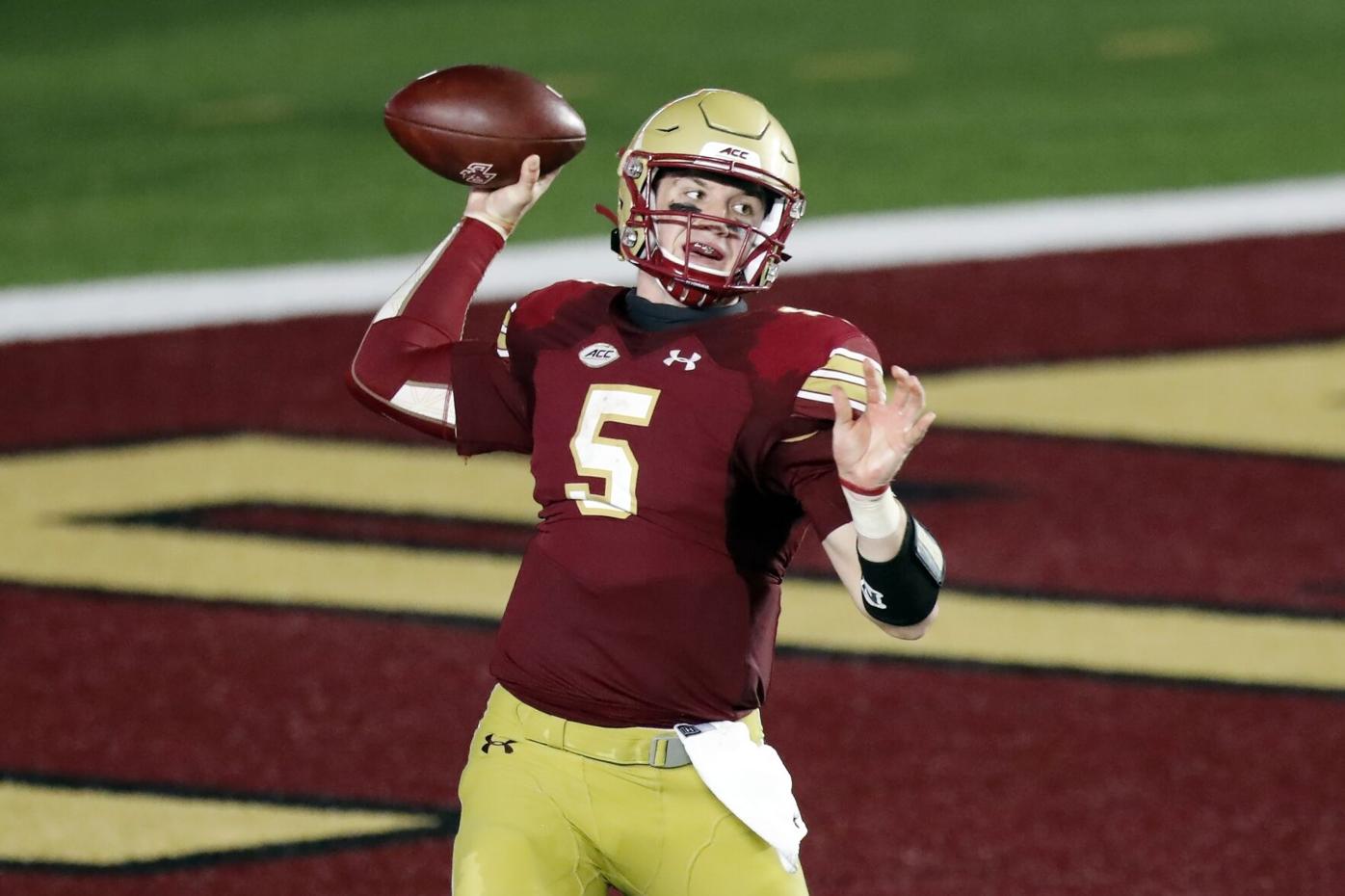 If the UMass defense can keep Boston College quarterback Phil Jurkovec under wraps on Saturday, it could go a long way toward keeping the score respectable.

It has been more than 600 days, 657 to be precise, since a University of Massachusetts football team played on the turf at McGuirk Alumni Stadium.

It was the end of head coach Walt Bell’s first season in Amherst. Bell said he’s excited to lead his team out of the Football Performance Center and onto the field in front of the home fans.

Bell and the Minutemen will welcome Boston College to McGuirk for a Saturday, 3:30 p.m. kickoff.

PITTSBURGH — For Walt Bell and the University of Massachusetts, there are no moral victories.

The Eagles, who beat Division I-FCS Colgate 51-0 last week, haven’t played in Amherst since 1982, when they beat the Bob Pickett-coached Minutemen 34-21, before 16,023 fans at McGuirk.

Boston College has won the last 10 games between the two schools, and the last time UMass won was in 1978, when the Minutemen beat the Eagles 27-0.

In a meeting with reporters at the start of the week, BC coach Jeff Hafley went out of his way to send some praise to Western Mass.

Saturday’s game marks the first time since UMass moved up to the FBS level that it has played Power-5 conference teams in consecutive weeks. The Minutemen are coming off a 51-7 thrashing at the hands of ACC squad Pittsburgh.

“We saw a pretty good fastball last Saturday,” Bell said, re-emphasizing a point he made following the Pitt game. “Hopefully, that will speed our adjustment to seeing another really good fastball this Saturday. We stepped in the box and saw the heater on the first pitch. Now, we’re going to go see it again. This is another great football team. Coach Hafley, those guys over there, they’re great coaches and they’re doing a nice job trying to build that roster and getting it to where they can be more competitive in their league, in the ACC.”

Going back-to-back against ACC teams may not do wonders for the UMass record. Edwards did say it can only help a young team grow.

“It’s not even the fact that it’s the ACC or a big-time school. We have such a hunger to prove to the world, to the country, to college football that we are here,” he said, “and we can compete.”

BC will be wearing its so-called Red Bandana uniforms. The white jerseys have numbers and piping designed like the red bandana the late Welles Crowther wore when he played lacrosse at Boston College. Crowther died while rescuing others on 9/11, inside the World Trade Center’s South Tower. Saturday will mark the 20th anniversary of 9/11.

UMass will mark the occasion with decal work on their helmets, which will be throwbacks. The Minutemen will wear white shells, with maroon stripes, the Calipari-era script “UMass,” and maroon facemasks.

The Minutemen will face a team that has similar skills to the one they saw on Saturday. BC is big and strong along the offensive and defensive lines. Pitt held UMass to 76 yards rushing and a net 42 when one factors in the five sacks of quarterback Tyler Lytle. Not only was Lytle sacked five times, there were nine quarterback hurries listed in the official statistics from Saturday at Heinz Field.

“From an offensive standpoint, the thing that needs to improve the most is confidence and execution,” said Edwards, who caught one of Lytle’s 14 completions and gained 32 yards.

The UMass offensive depth chart changed little from the first week to the second. Left guard Reggie Marks III is still listed as the starter, but Bell said that as of the middle of the week, he was not certain how much Marks would be able to play. If Marks can’t go, Michigan transfer Willie Allen will plug in. That does, however, impact the depth along the offensive front.

There is one other change in the depth chart as true freshman Brady Olson is listed as the No. 2 quarterback behind Lytle. Redshirt freshman Garrett Dzuro was listed as the QB2 last week, and did play the final series.

Observers at practice said that during the open sessions, Lytle was not in full pads. Five sacks, nine hurries and four rushes meant that Lytle took his fair share of contact.

Defensively, safety Bryson Richardson’s status is also unknown for Saturday. He suffered a leg injury during the Pitt game and did not return for much of the second half.

When you talk about the Eagles, quarterback Phil Jurkovec is usually mentioned first. Jurkovec is a redshirt junior, who transferred to BC from Notre Dame, was 16 of 24 for 304 yards and three touchdowns. He had a passer rating of 214.3. In addition, Jurkovec ran the ball five times for 61 yards, and was BC’s leading runner against Colgate.

“He’s a great player,” Bell said of Jurkovec. “He will be a draft pick. I’m not sure where, but he will be a draftable guy. He’s big, tall, strong. The offense around him suits him very well. I think what makes him special, where Kenny Pickett was a great athlete and a great runner, Phil is really strong, really hard to bring down. He’s very rugged. He’s very hard to get on the ground when you get to sack points.

BC’s top receiver is Zay Flowers, who caught seven balls for 135 yards and a touchdown against Colgate. Four different BC receivers caught at least two passes in the game.

Boston College center Alec Lindstrom is one of two non-Eastern Mass. players on the Eagles’ roster. He and former UMass defensive end Jake Byczko are from Dudley and Auburn, respectively. Lindstrom and UMass linebacker Zack Magdis were teammates at Shepherd Hill High School before Magdis went to Worcester Academy.

“No trash talk from me” this week, Lindstrom said in a video conference. “I know a couple of guys on UMass. Zack Magdis, their linebacker, I went to high school with him. I played with him, he’s a very athletic kid. Trash talking? No. I’m worried about watching the film and letting the play do the talking.”