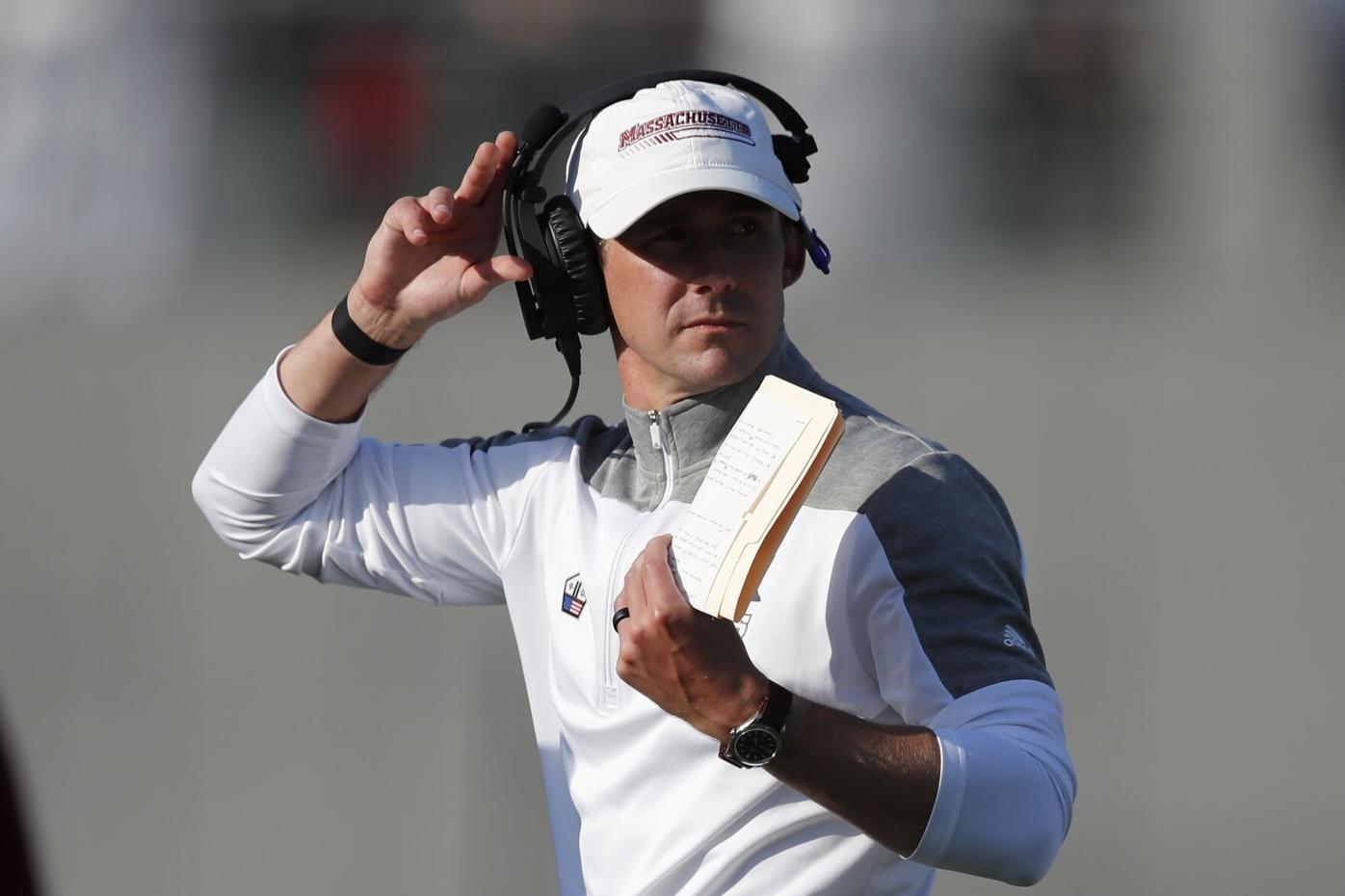 UMass football coach Walt Bell says he knows how important Saturday's game with UConn is. The winless Minutemen and the winless Huskies will meet for the 75th time and one team will get its first win of the season. 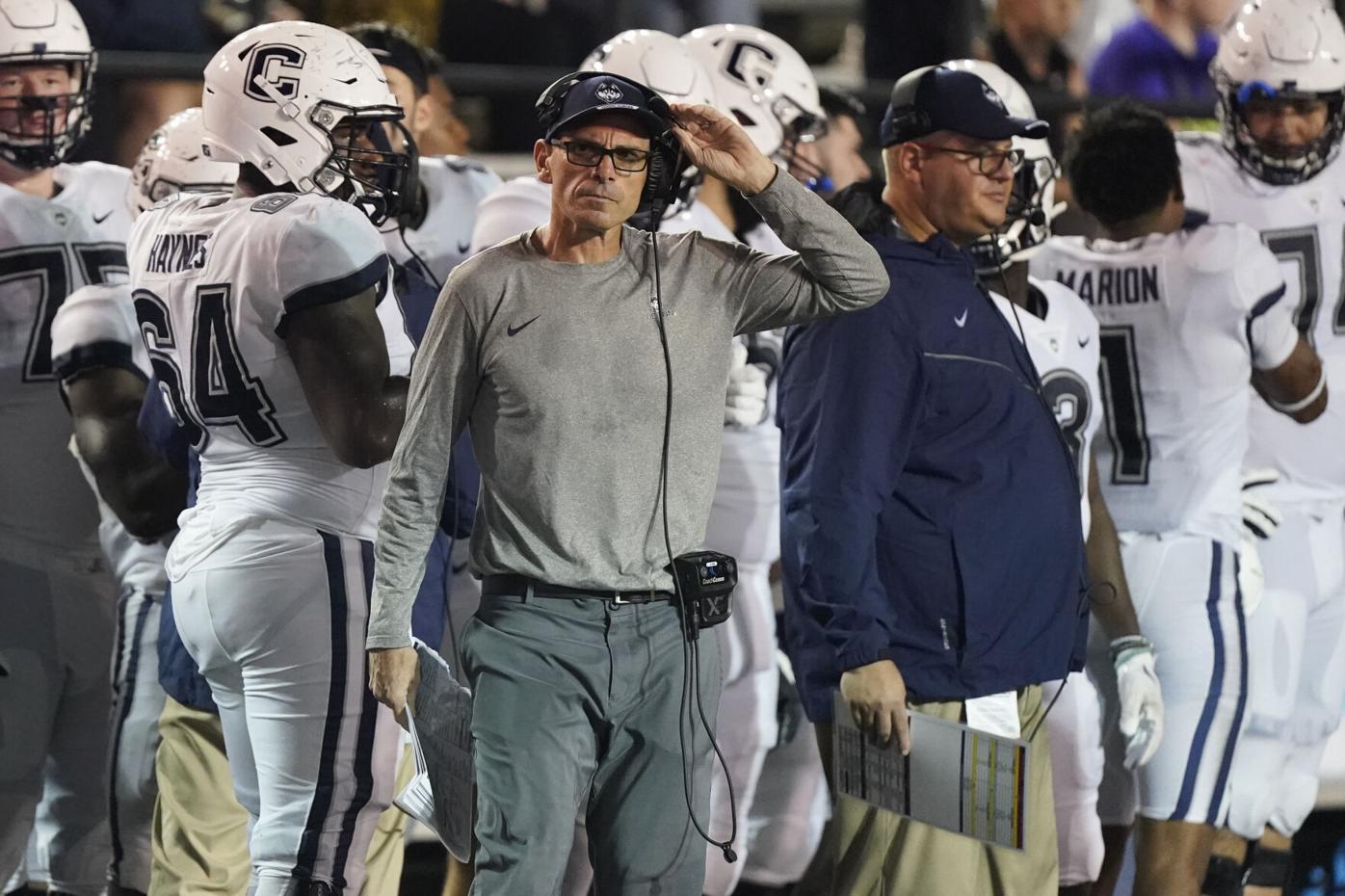 UConn interim head coach Lou Spanos watches from the sideline during last week's loss at Vanderbilt. Spanos and his staff have been told that when the 2021 season is over, they will all be out of jobs.

AMHERST — It had been a historic Division I-AA rivalry game in the old Yankee Conference. But when UMass and UConn meet here on Saturday, the stakes will be much, much different.

Kickoff for this New England rivalry is 3:30 p.m. The game will be telecast on NESN.

Bell and the Minutemen bring their 0-5 record into McGuirk Alumni Stadium and have not won a game in 16 consecutive attempts. The Huskies, meanwhile, are 0-6 and the last time they won was on the McGuirk turf just shy of two years ago, when they beat UMass 56-35. Since then, not only has UConn gone 0-10, but head coach Randy Edsall had announced that he was going to retire at the end of the 2021 season. It was later determined that he would not coach the rest of the current campaign.

“There’s a lot on the line for a lot of people,” Bell said, during a weekly video conference with reporters. “It’s a big game. [Tuesday’s] practice reflected that.”

In another video session, UMass tailback Ellis Merriweather, who did not play in the 2019 game, also recognized its importance in the locker room in the football building and across the campus.

“I would most definitely say so,” he said. “It felt like New England [Tuesday]. It was raining at practice. It’s UConn vs. UMass. It’s probably the rivalry of New England, or one of the biggest ones. There’s definitely a little extra juice.”

From the UConn side, there isn’t much talk of the rivalry or “extra juice.” Maybe it’s because UMass has, in basketball circles at least, been a little sibling to the Huskies. Or more importantly might be the fact the Bell and his staff could be coaching for their careers if they can’t get things turned around. At UConn, the New London Day reported that interim head coach Lou Spanos and his staff would not be returning for 2022, no matter how the Huskies’ first season as an independent goes.

“There is history with the two programs, but we’re focused on the opponent, and the opponent is UMass,” Spanos said during his weekly video conference. “We have a lot of local players from local states and they have teammates or friends there, so it’s also a bragging rights [game] too.

“This team is a good team, UMass, don’t let the record reflect it, and we’re looking for a challenge.”

Spanos, however, will not be with the team. He is one of five members of the UConn program who tested positive for COVID-19, and will not be in Amherst. Spanos, offensive coordinator Frank Giufre and tight ends coach Corey Edsall, along with starting left tackle Ryan VanDemark and freshman lineman Will Meyer, are back in Storrs, Conn., isolating. According to a release from UConn, all five have been fully vaccinated.

That game was tied 14-14 after one quarter, but UConn exploded for 21 unanswered points to help put the game in the win column.

UMass back Ellis Merriweather is ready for an increased workload; Kay'Ron Adams out for season

UMass back Ellis Merriweather is ready for an increased workload; Kay’Ron Adams out for season

The key players on offense in that game for UConn have either graduated or found themselves on the bench. Jack Zergiotis got the start against UMass back in 219, and he completed 18-of-27 passes for 198 yards, one touchdown and one interception. The leading ball carrier was Worcester-area native Kevin Mensah, who scored five touchdowns and ran for 164 yards on 19 carries.

According to the UConn depth chart, Zergiotis is backing up starter Steven Krajewski. Krajewski himself moved in as the starter after an injury to Tyler Phommachanh. Zergiotis started the first two games and Krajewski started Game 3. Phommachanh had been the starter in the last three games for UConn.

Mensah lost his starting job to Nathan Carter, who has started the last two games for the Huskies.

On the injury front, Bell said earlier in the week that Kay’Ron Adams was having surgery on an ankle and was lost for the year. When asked, Bell said he was not sure about cornerbacks Donte Lindsey and Josh Wallace, but both were out practicing in pads on Wednesday, when media members were allowed to watch. Tyler Lytle, Miles Turner and Zach Magness are still out for the long-term. Left tackle Max Longman will, according to Bell, be a game-time decision.

Bell said that running back Jonathan White had a family issue in Kansas and he left school, while running back Jared Cole left the program after a COVID-19 pandemic lockdown. That leaves Merriweather as the lone scholarship back, with PWOs Carter Scudo and Jared Chisari in reserve.

The challenge for UMass on Saturday is to play a team kind of going in the opposite direction. The Minutemen, after hanging with Boston College and Eastern Michigan. were routed in successive weeks by Coastal Carolina and last Saturday, at home by Toledo.

UConn, meanwhile, was routed in three of its first four games. The lone non-rout was a 38-28 loss to Division I-FCS Holy Cross in a game at Hartford. But in the last two weeks, the Huskies lost by two points at home to Wyoming and at Vanderbilt.

“They’re running the football better,” Bell said of the Huskies. “They’re playing more patient on offense. Their special teams play is much better. Defensively, I don’t want to say they’ve simplified things because they have the same D-coordinator in coach Spanos. He’s always done a great job. They seem to be executing better on defense.”

UMass has had its share of problems on both sides of the ball in five games. The biggest problem, according to Bell, and the one the Minutemen hope to fix on Saturday are slow starts.

“I think that’s our challenge right now is execution early in the football game, specifically offensively,” Bell said. “It’s doing everything we can to establish a nice, clean, early game plan that we can execute, especially with a young quarterback. The big challenge for us this week is come out, start fast and we have to put ourselves in position to play good football.”