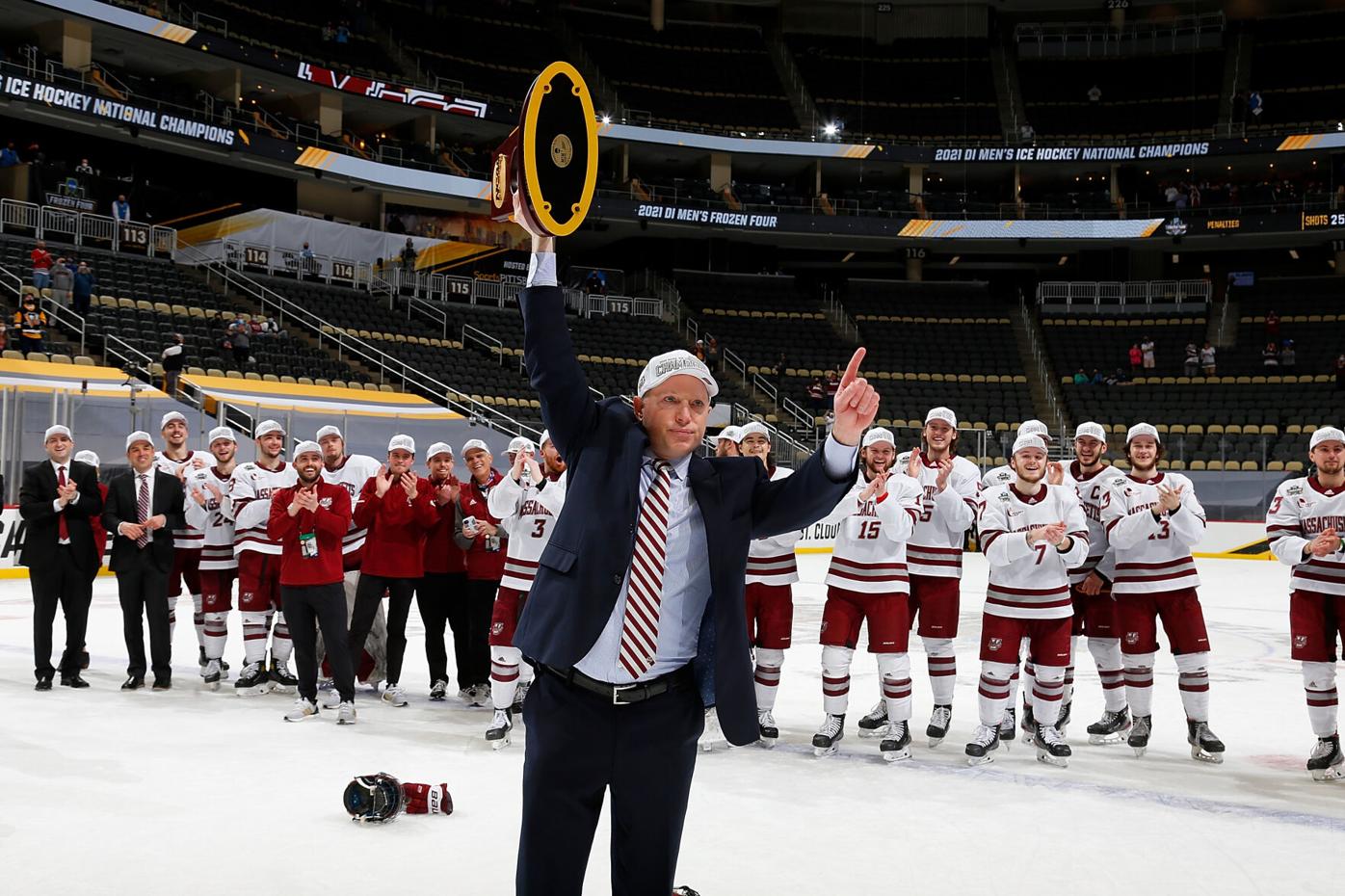 UMass coach Greg Carvel hoists the NCAA championship trophy after the Minutemen beat St. Cloud State in the Frozen Four championship game on April 10. Carvel and the Minutemen will begin defense of their title Saturday night at home against Minnesota State. 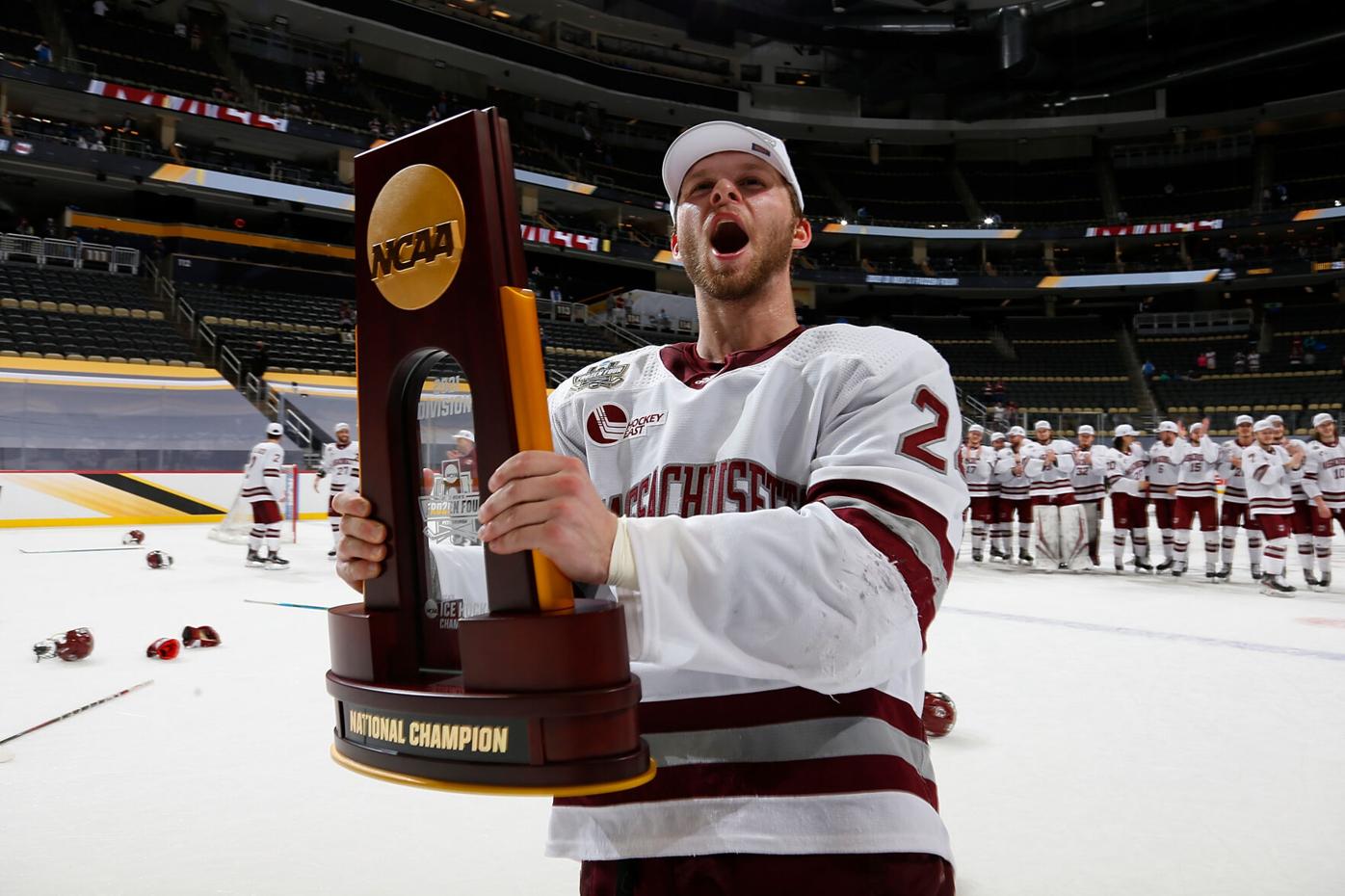 UMass' Zac Jones had an opportunity to raise the national championship trophy in April. Jones is not back with the Minutemen, having signed with the NHL's New York Rangers.

As UMass coach Greg Carvel celebrates the occasion in front of an SRO crowd in the arena, the veteran coach said that his players have to know it means little looking forward.

“One thing I know is that last year, whoever was the preseason No. 1 didn’t win it all,” Carvel said. “The fact that we’ve been given that ranking in preseason means absolutely nothing.”

The Minutemen, who were 20-5-4 last season, beat St. Cloud State 5-0 in the NCAA Division I championship game in Pittsburgh back on April 10.

The sold-out opener will be played Saturday at 7:30 p.m., with the second game of the series scheduled for Sunday at 4 p.m.

“Everybody’s excited to get back to normalcy, have some fans back in the building,” Carvel said on a video conference with reporters Wednesday morning. “That was the one thing that was missing from our season, that we didn’t have eyes on our guys live, as we were winning games and luckily winning championships. Looking forward to this weekend when we can raise the banner, have a full building. It’s officially sold out, 8,500 seats are sold at the Mullins Center.

“We’re excited to defend the championship.”

It will, however, be a somewhat different UMass team that hits the Mullins Center ice on Saturday night.

First of all, associate head coach Ben Barr has moved on. Barr, who spent five years on Carvel’s staff, is now the head coach at Hockey East rival Maine. He replaced Red Gendron, who passed away in April.

UMass does return its leading scorer in captain Bobby Trivigno. Trivigno, who had 11 goals and 23 assists, and defenseman Matt Kessel (10 goals, 13 assists) are the top returning scorers for UMass. Garrett Wait, whose goal in overtime gave UMass a 3-2 win over Minnesota-Duluth in a national semifinal, is back. Trivigno, Kessell, Aaron Bohlinger and Reed Lebster all scored in the championship game.

“I like the team we have coming back,” Carvel said. “The difficult part is that we have about 40 percent of our team are new players, from graduation and three players who signed with the NHL. We’ve had to fill some roles, and it doesn’t matter how good those players are, it takes time.”

Last year, Lindberg played in net down the stretch and helped win the title. Matt Murray, who started the year but was eventually beaten out by Lindberg, is the lone veteran goalie. If and when Luke Pavicich and Henry Graham take the ice, it’ll be their first-ever college appearances.

One other change, with Barr having gone off to Maine, Matt Lindsay was hired as an assistant coach. Lindsay comes to UMass from Penn State. He played collegiately for Bill Kangas at Williams, graduating in 2001.