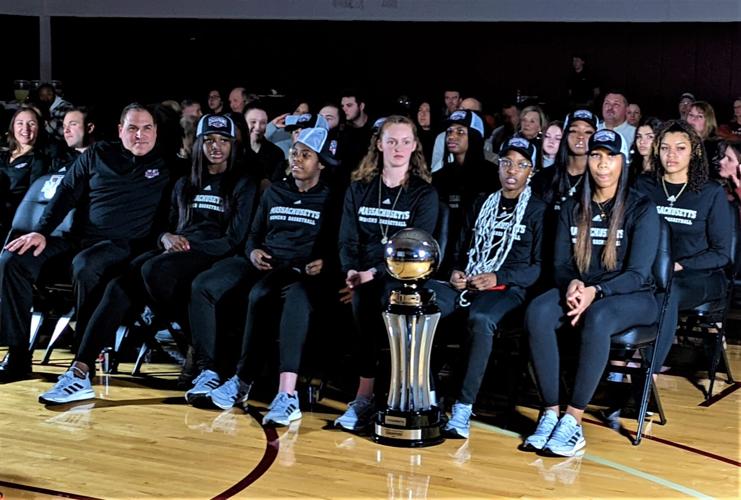 The UMass women's basketball team held a watch party for the NCAA Tournament selection show on Sunday night in Amherst. 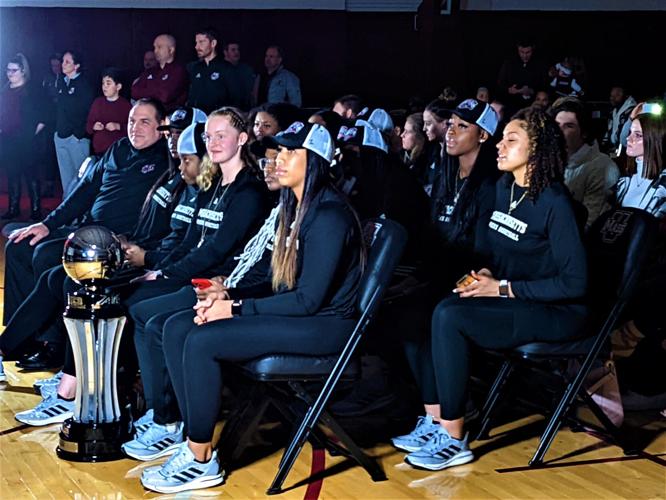 The UMass women's basketball team held a watch party for the NCAA Tournament selection show on Sunday night in Amherst.

AMHERST — It was fun, no doubt, to see the name on the television bracket.

But now that the University of Massachusetts knows where it will go and who it will play in the first round of the NCAA Division I women’s basketball tournament, fun can be put on the shelf.

“I feel like we can have fun later,” UMass guard Destiney Philoxy said. “Right now, like I said, we’re just trying to win. I want to win so bad. Our team wants to win so bad.

UMass players, head coach Tory Verdi and his staff, along with supporters, gathered in the Champions Center women’s court Sunday night to watch the unveiling of the 68 teams that make up the women’s bracket.

It took a while for the Minutewomen to hear their name called, making it more nerve-wracking just to find out where they were going. As the Atlantic 10 Conference Tournament champion, UMass had earned an automatic berth in the field. It took a while because the Bridgeport Region was the final region announced.

UMass is the No. 12 seed in the region, and will head west. UMass will play fifth-seeded Notre Dame in a first-round game at the University of Oklahoma in Norman. Fourth-seeded Oklahoma will play No. 13 IUPUI in the first round. UMass-Notre Dame will be on ESPN2 Saturday at 7:30 p.m., OU-IUPUI will follow on ESPNU.

Should UMass get through that gauntlet, the Minutewomen will end up in Connecticut, where North Carolina State is the No. 1 seed and UConn is No. 2.

“I feel like all of us really step up to that challenge, like the bigger the stage, the better we play,” said Sam Breen, UMass forward and the reigning A-10 Player of the Year. “I know this one [Philoxy] does every time we’re on national TV. It’s going to be super-exciting for all of us. I think we’re definitely ready for it.

“It won’t change our mentality at all and we’re all ready for the big stage.”

In Designated Hitter this week, columnist Howard Herman caught up with Atlantic 10 Player of the Year Sam Breen after her UMass women punched their NCAA Tournament ticket.

It’s the third time UMass has made it to the Division I tournament, and the first trip since 1998. That year, the 13th-seeded Minutewomen lost to No. 4 Iowa 77-59.

While for Verdi and his players, the trip to Oklahoma is about wins and losses, UMass athletic director Ryan Bamford says it is a great thing for the whole athletic program.

“This is outstanding. What a great evening for our athletic department and for our university, and certainly for our women’s basketball program,” Bamford said shortly after ESPN’s Elle Duncan read UMass’ name. “We’re so proud of what they’ve done and what Coach Verdi has built. To play not only in the tournament but to play a really [esteemed] program like Notre Dame in the first round is a great opportunity and I know our women are excited.”

In women’s basketball, there are few bloods bluer than the Fighting Irish. This is Notre Dame’s 27th NCAA tournament appearance. The Irish have gone to nine Final Fours and have won titles in 2001 and 2018. This year, Notre Dame lost to Miami in the semifinals of the ACC Tournament, earning a No. 5 seed.

“I don’t care where we play, to be honest with you,” Verdi said. “We get the opportunity to step on the court with a team that has won national championships, a team that has unbelievable history. For us, to have that opportunity and to play against them is something special. I’d be excited regardless of our opponent. I think when you hear the national brand of Notre Dame, it just elevates it a little bit more.

“Regardless of who we’re playing, we will be prepared and we will be excited to play. We will have a great opportunity to do something special.”