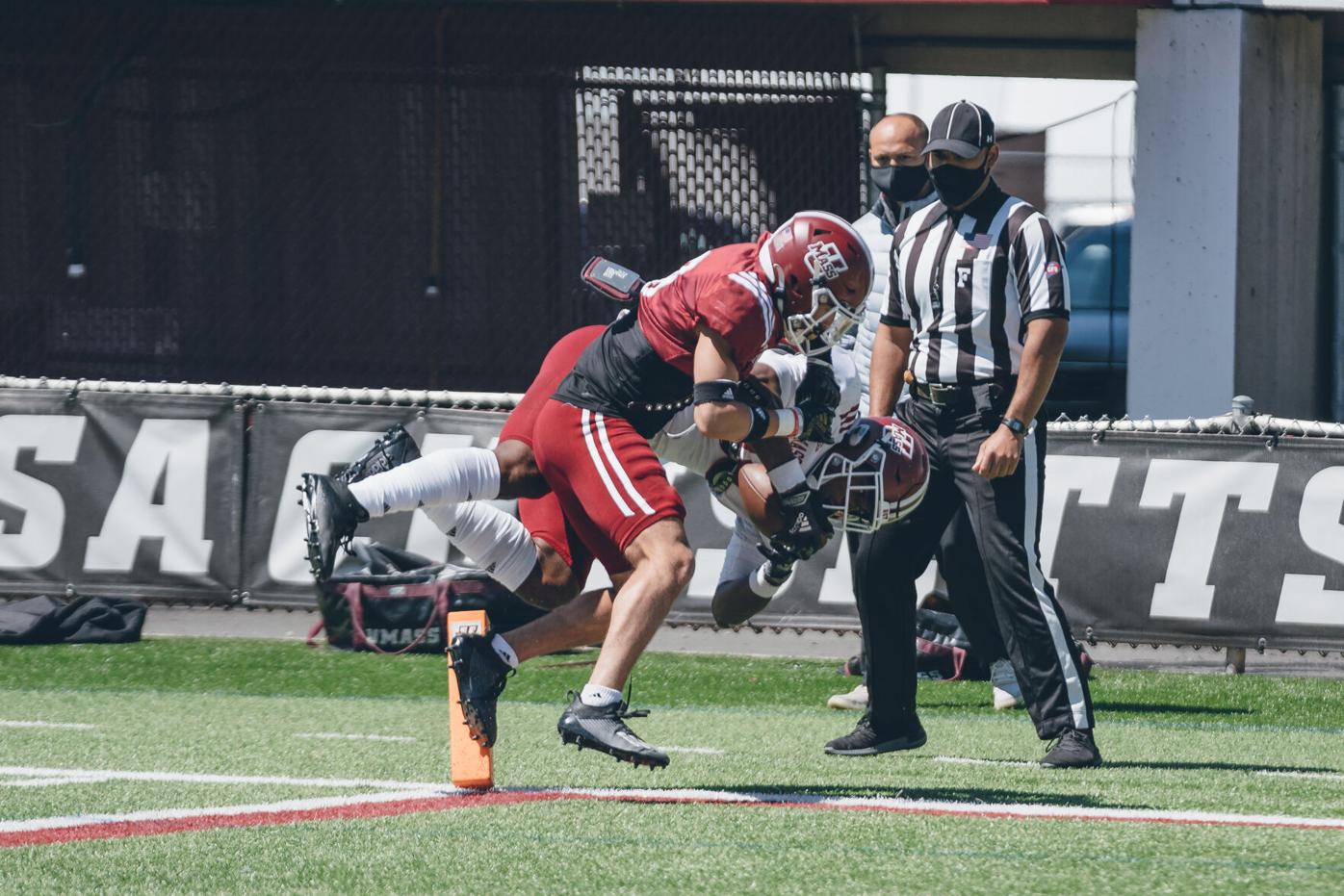 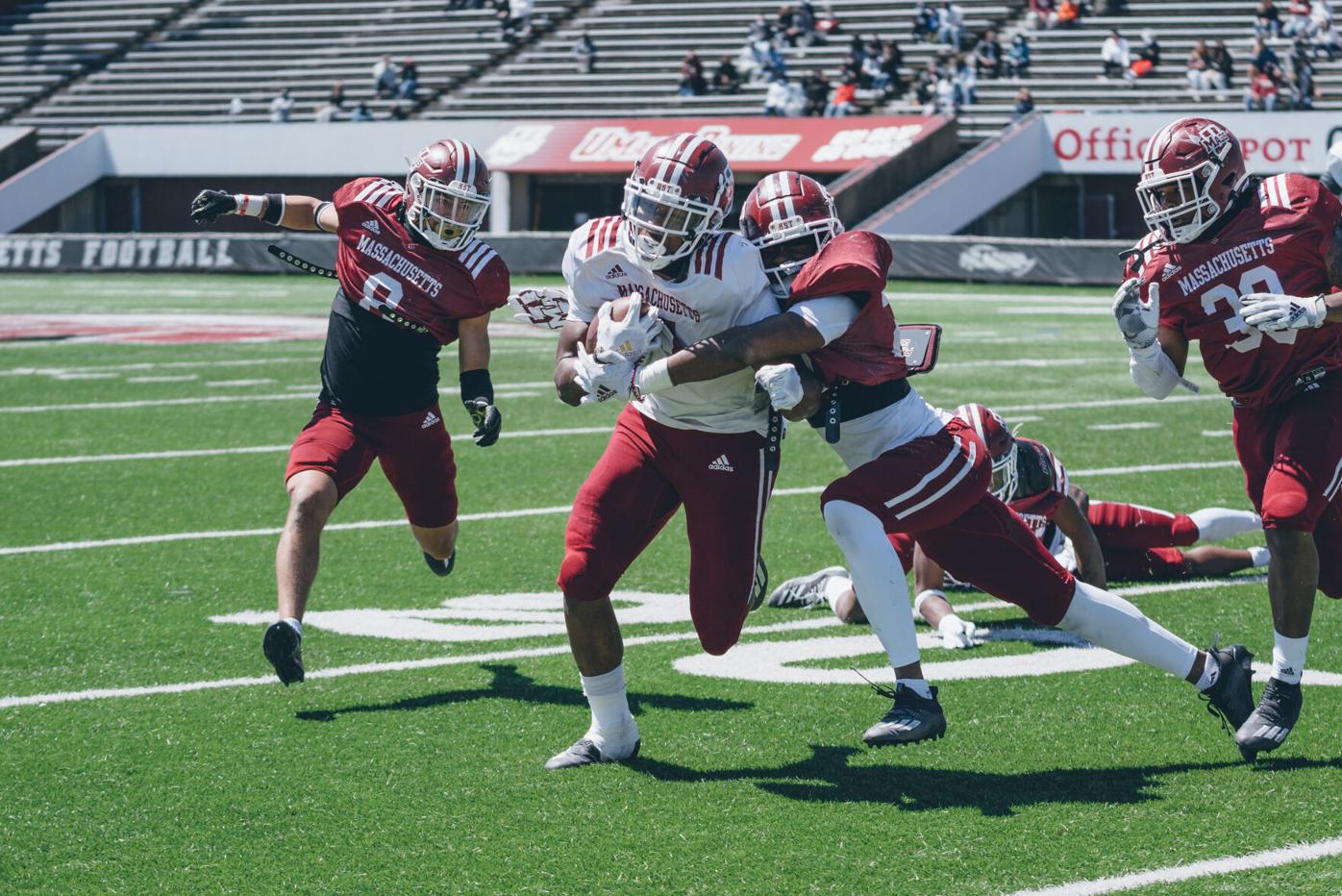 UMass running back Ellis Merriweather carries linebacker Gerrell Johnson on his back for a gain during Saturday’s spring game in Amherst. 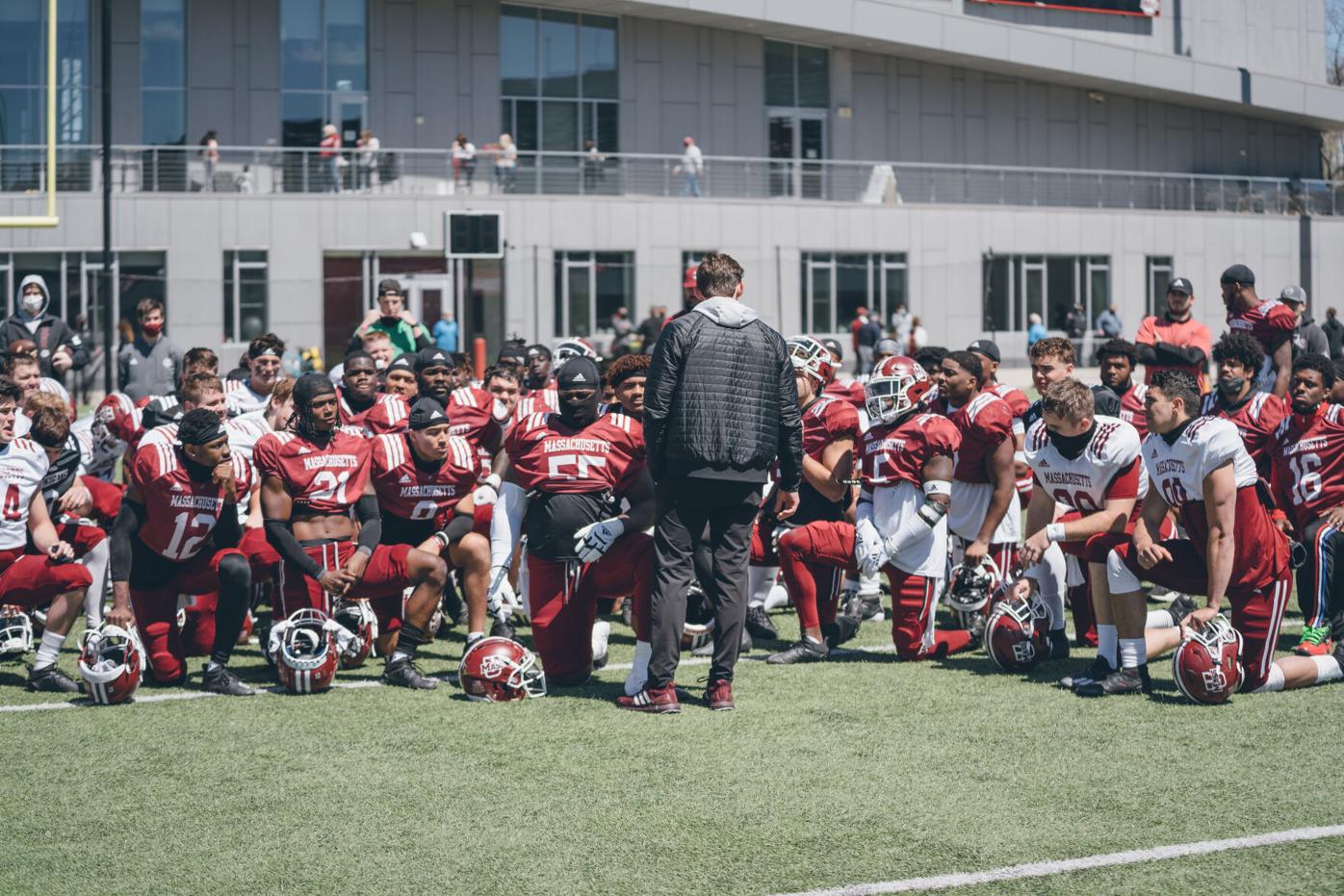 UNIVERSITY OF MASSACHUSETTS PHOTO Massaschusetts head coach Walt Bell addresses his players at the conclusion of Saturday’s spring game at McGuirk Alumni Stadium in Amherst. Bell told reporters that all in all, it was a great end to a good spring practice season.

UMass running back Ellis Merriweather carries linebacker Gerrell Johnson on his back for a gain during Saturday’s spring game in Amherst.

UNIVERSITY OF MASSACHUSETTS PHOTO Massaschusetts head coach Walt Bell addresses his players at the conclusion of Saturday’s spring game at McGuirk Alumni Stadium in Amherst. Bell told reporters that all in all, it was a great end to a good spring practice season.

AMHERST — One might have thought they just won a December bowl game.

When Cam Carson’s 24-yard field goal split the uprights, the members of the University of Massachusetts offense mobbed the former University of Maine kicker as if they won a championship. They didn’t, but the field goal enabled the offense to go 1-1 against the defense in Saturday’s spring game at McGuirk Alumni Stadium.

“It was awesome,” UMass quarterback Tyler Lytle said. “I had all the confidence in the world that it was going through the uprights. He executed it perfectly, and it was a great way to cap off a great spring for the offense.

“We made a lot of progress, but we still have a lot of work to do. It’s a great way to send us off on a short break.”

The Minutemen were divided into offensive and defensive sides for the spring game, a game that took about 90 minutes to complete. The game was split into two halves. In the first half, the offense ran eight possessions from various spots on its side of the 50-yard line. The second half was a “Red Zone Lockout,” where the offense started on the defense’s 25-yard line and tried to score.

The defense won the first half 11-7, when Josh Wallace broke up a fourth-down pass from Zamar Wise to Tray Pettway. The second half of the spring game was decided by a 27-22 final score. The offense got enough points when Carson made the field goal. Had he missed, the defense would have won the second half as well.

“It’s a good moment for him moving forward, and hopefully when he gets in the same situation, he knocks one through and wins a game for us.”

Cornerback Noah Boykin said he would have liked to have a different outcome.

“I was excited for Cam, man. That’s my guy from last year. He’s come a long way and still working,” said Boykin, the transfer from Notre Dame, who sat out the truncated 2020 season because of transferring.

“I wasn’t really mad at all” he made the kick, Boykin said, “but I would have loved for us to go and get that block for sure. We needed those points and I wanted to win. We couldn’t do it, but it was all right.”

When Bell met with reporters in a post-game video conference, he said that there were no injuries to report. A couple of players who were nicked up during practice did not play. But the coach, who begins his third season this fall, said that without watching the game tape, he was pleased with the 90 minutes.

“I think it was a culmination of a great spring. After today, I think we finished probably 1,250 to 1,300 reps. In our first spring here, we only got to 800 reps” because of a lack of available players in the spring game, Bell said. “We had a great day. The kids had a great time. We got out healthy. We were down a few guys today. We’re in a good spot.

“There was some good back-and-forth today, good competition in some of the situational stuff, and it was good.”

The spring game was scored differently for each half. In the first section. the offense got points for touchdowns and field goals. The defense got seven points for a touchdown, three points for a forced turnover and a fourth-down stop, along with one point for a 3-and-out and a field goal in the red zone.

In the Red Zone lockout phase, the offense would get credit for a touchdown and a made field goal. The field goal gave three points to the offense and four to the defense. Any other outcome rewarded the defense with seven points.

The biggest question of the day was how would the UMass quarterbacks look. All four listed, not including tight end/QB Josiah Johnson took snaps. Lytle had the best day of the four.

He completed 5-of-10 passes for 77 yards and one flukey touchdown. Wise was 2 for 7 for 22 yards, while returning veteran Garrett Dzuro was 3 for 9 for 24 yards and he was picked off by cornerback Noah Boykin.

Did any of the three win the job off this game? Bell has, throughout the spring, emphasized that the quarterback position might stay open until fall practice, and said the same thing on Saturday.

It’s a competition that will heat up even more when the current crop of high school seniors still in school arrive on the Amherst campus this summer.

“I’m excited for [Milford’s] Brady Olson to show up for the fall camp as well, this summer,” Bell said.

Lytle was asked the same question.

“I haven’t really focused on that,” he said. “We talked about it a couple of weeks ago, it’s one day at a time. I’m focusing on the controllables.”

Lytle had the best numbers of the quarterbacks, and appeared to be pretty comfortable in the pocket most of the time. His first play from scrimmage was an incompletion to Onuma Dieke, a ball the receiver did catch out of bounds. On the next play, the redshirt sophomore who transferred from the University of Colorado, scampered for 15 yards.

The 6-foot-5 quarterback from Redondo Beach, Calif., did some good work with sophomore wide receiver Tray Pettway. Pettway caught two passes for 52 yards, both from Lytle. The first was a catch-and-run in the left flat for 21 yards. After a false start penalty against the offense, Lytle took the shotgun snap and threw toward a wide open Josiah Johnson. The ball deflected to Pettway, who took it 32 yards into the end zone for the first offensive touchdown of the day. It came on the third offensive series, a series that started on the offense’s 35-yard line.

“We scored. Sometimes things don’t happen how they’re supposed to, but we made it work,” said Lytle.

In the end, the three quarterbacks who threw passes were a combined 10 for 26 against the defense.

The Minutemen got to play in front of family, friends and some UMass students. The players who visited with reporters on postgame video conferences all smiled when they were asked about that.

“It was great, you know what I’m saying?” Boykin said. “Just to have our family and our original fans supporting us today, that’s love. We didn’t really have that luxury last year when every game we had was away, so we didn’t have a home crowd.

“For this to be our first home game, I loved it. I loved the atmosphere and I loved the family vibes.”