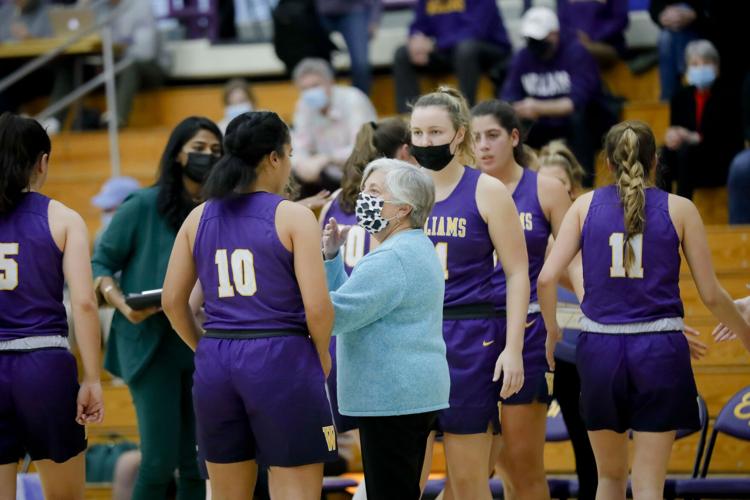 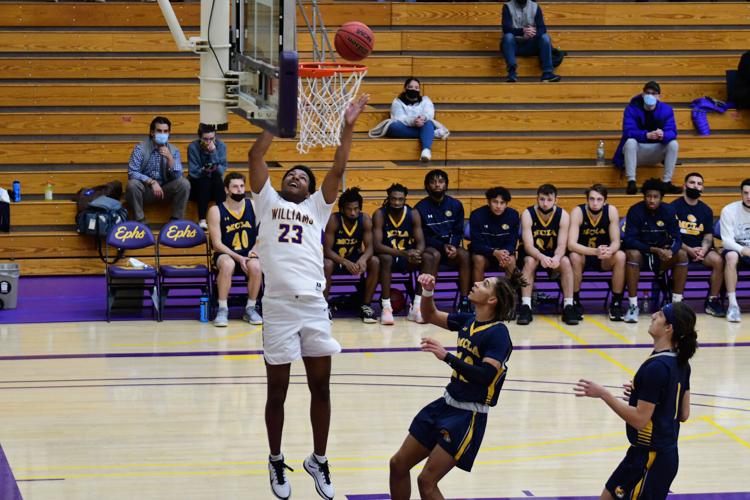 Jovan Jones (23) and his Williams College teammates will open the NESCAC men's basketball tournament at home on Saturday against archrival Amherst.

For the first time in the history of the New England Small College Athletic Conference, it will be everyone in the basketball tournament pool.

With that, the Williams men and women will both host early-round games.

The Williams men will host Amherst in a quarterfinal game on Saturday at Chandler Gym. Chandler will also be busy on Friday as the Williams women will play Connecticut College in a first-round game.

In 2022, there is a difference between the first round and the quarterfinal. NESCAC officials went to an every-team-makes-the-tournament plan.

"Due to COVID-19 protocols creating challenges for NESCAC teams to reschedule games this winter and the potential for a disparity in the number of regular-season conference games played, the NESCAC membership has agreed to modify the basketball championships for the 2021-22 season. All NESCAC teams will be included in this year’s basketball championship field," read a paragraph on the conference's tournament page. "Furthermore, any conference game not able to be played will be declared a no contest. The tournament champion will receive an automatic bid to the NCAA Division III Championship."

The schedules for basketball include first-round playoff games Friday involving the bottom six seeds. A 4-5 quarterfinal will be played on Saturday, while the top three seeds will host quarterfinal games on Sunday.

The semifinals and final will be held at the gym of the top semifinal seed.

Fans are once again permitted inside Chandler Gym at Williams. The school is limiting crowds to 50 percent of capacity, and spectators who are not part of the Williams testing bubble (students, faculty, staff) will need to provide proof of vaccination status before being admitted. Masks are required for all spectators, and the doors will open 30 minutes before the start of the games.

Williams finished up with a 5-3 conference record. The Ephs canceled games at home against Connecticut College and Trinity due to a COVID-19 shutdown that kept the team from practicing in full for two weeks.

Because of that, the Ephs earned the No. 4 seed in the field of 11. Coach Kevin App's squad will host Amherst in a rubber game between these historic rivals and for the right to advance to the semifinals. Tip-off is set for 2 p.m. on Saturday.

On Jan. 8, the Mammoths beat Williams 73-65 in Williamstown. Eleven days later, the Ephs went into LeFrak Gymnasium and came home with a 60-54 victory.

Williams enters the tournament having beaten Bates 72-60 on Sunday in Maine. It was the second game where App had his full complement of players. After a rough first half against Tufts Friday night, Williams played the Jumbos even in the second half as two starters and three other rotation players got their game legs back.

Going back to last Monday, starters Nate Karren and Spencer Spivy, along with Brandon Arnold, Evan Glatzer and Ryan Moon, were out of action in the 97-52 loss to Wesleyan. Starters Jovan Jones and Cole Prowitt-Smith did play in the game, Prowitt-Smith having received his clearance to play just prior. Then on Saturday, Williams was outscored by 13 in the first half at Tufts. The Ephs held on, but could not catch up in an 81-66 loss.

Williams will play an Amherst team that had won five straight games before closing out the regular season with losses at Trinity and Conn. College.

This will be the second straight year Williams and Amherst have met in the quarterfinals. Back in 2020, Mickey Babek hit a layup with one second left in regulation, sending the game into overtime. Spivy hit a layup to put Williams up 80-78 in overtime, but Amherst's Grant Robinson answered with a jumper. Then Josh Cherry hit two free throws and the Mammoths never trailed again.

The tournament begins with teams 6-11 playing each other for the right to play in the quarterfinals.

Bowdoin, the No. 11 seed, plays at sixth-seeded Conn. College, No. 7 Trinity hosts No. 10 Bates, while ninth-seeded Colby is at eighth-seeded Hamilton. The 8-9 winner plays at top-seed Wesleyan, the 7-10 winner is at No. 2 Tufts and the 6-11 winner goes to No. 3 Middlebury.

Since the NESCAC started playing a tournament, a No. 8 seed guaranteed a team a quarterfinal road game against the top team in the regular season. Not this year.

With the everyone-in tournament, the No. 8 seed actually gets a first-round home game. That will allow Pat Manning's Ephs to play one more game in Chandler.

The next game the Camels win in the NESCAC tournament will be their first. Conn. College is 0-6 in the tourney, and lost to Williams 45-44 back in 2015's quarterfinal round.

Pat Manning's squad has been a perennial tournament team, but hasn't played in a championship game since 2013. That year, the No. 3 Ephs beat No. 6 Wesleyan and fourth-seeded Middlebury, but lost in the final to No. 2 Amherst 53-38. That was the year Williams and Amherst both made it to the NCAA Division III Final Four. Both teams lost in the semifinals, but Williams scored a 57-53 win in the consolation game, behind 13 points and 12 rebounds from Danny Rainer.

The first quarterfinal on Saturday will feature No. 5 Bates (6-4) at No. 4 Middlebury (6-4). The Panthers won in the regular-season finale to earn the tiebreaker.

Trinity, the No. 1 seed for the first time, is 8-2, and will play the winner of the Williams-Conn. College game on Sunday. No. 2 Tufts, also 8-2 but losers to Trinity, will play the Wesleyan-Hamilton winner, while No. 3 Amherst (7-2) will host the Bowdoin-Colby winner.