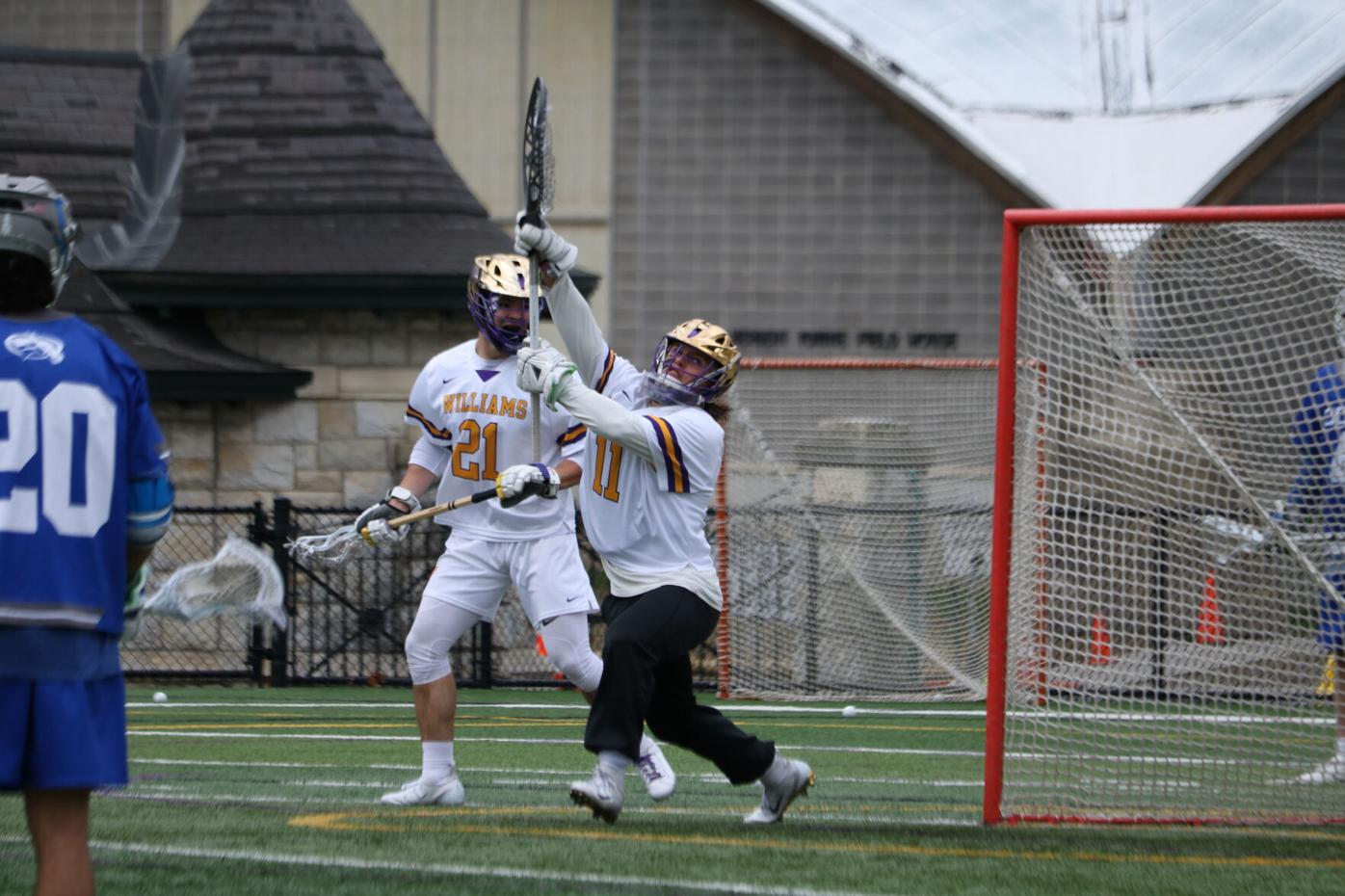 Williams goalkeeper Harry Gahegan is the NESCAC men’s lacrosse player of the week. He leads the Ephs into Saturday’s conference championship game against Tufts. 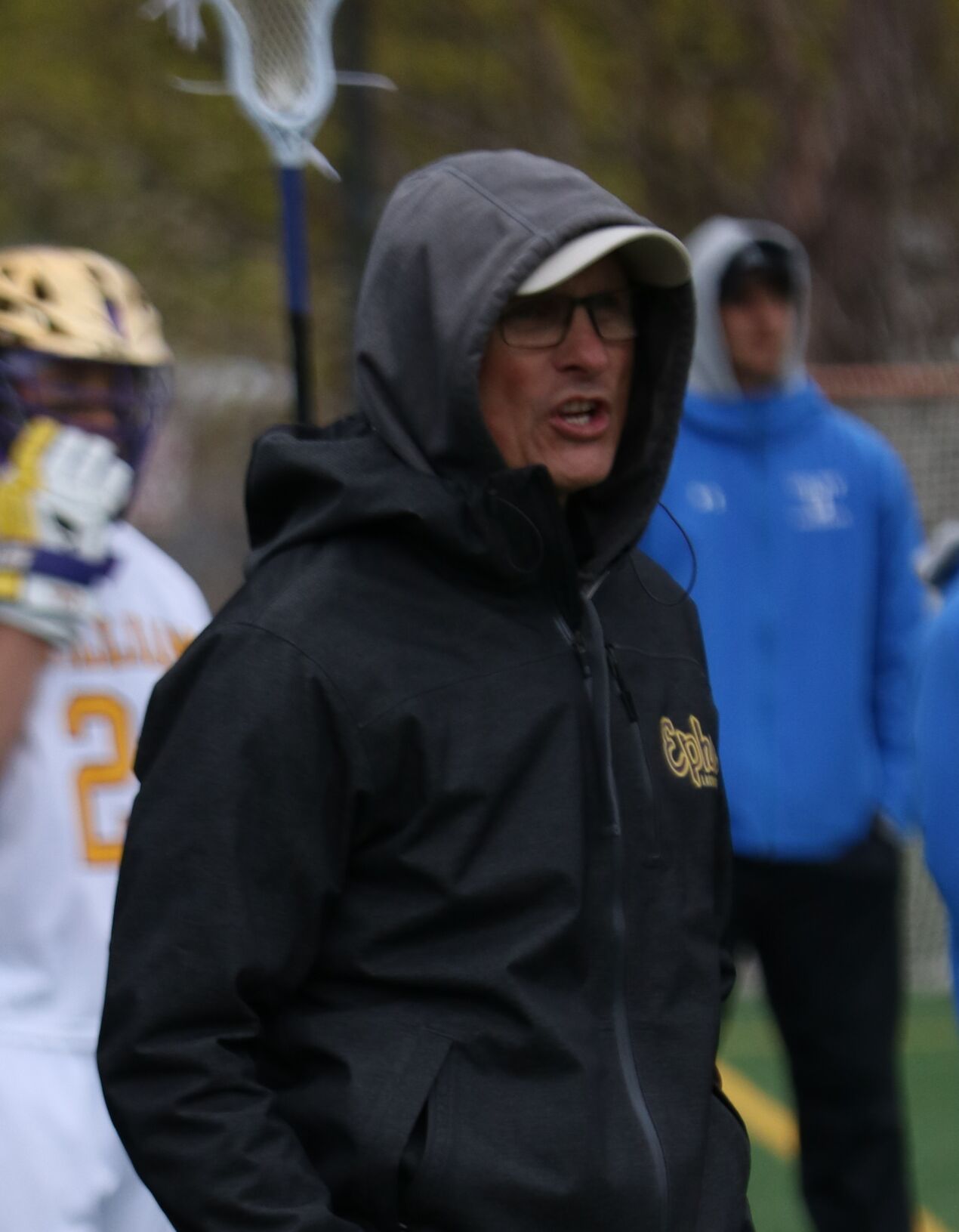 Williams goalkeeper Harry Gahegan is the NESCAC men’s lacrosse player of the week. He leads the Ephs into Saturday’s conference championship game against Tufts.

Two Williams College teams have a chance to claim conference championships this weekend — and will have the opportunity to do it at home.

The nationally-ranked men’s lacrosse and softball teams will host NESCAC championships this weekend. Coincidentally, both teams will be hosting rivals from Tufts.

The weekend starts with Williams hosting Tufts in the NESCAC softball championships. The teams will play a Sataurday doubleheader starting at 2 p.m., and there would be an “if” game on Sunday at 3 p.m. That game would be played if Williams and Tufts split Saturday’s doubleheader.

The men’s lacrosse team will host Tufts at Farley-Lamb Field on Saturday at 6:30.

Both championships feature their sports reigning players of the week. Goalkeeper Harry Gahegan is the men’s lacrosse player of the week, while pitcher Kirstin Mapes is the NESCAC pitcher of the week for the second consecutive week.

None of the games will be open to the public. The contests will be streamed on the Northeast Sports Network. Links to the broadcast can be found on the team schedule pages.

Spring sports in NESCAC are historically based on divisional play. Unlike years past, where the top two teams from each division enter the tournament, only the two division champions will play for the trophy.

Williams is 12-0, having played all of its games inside the West Division. East champion Tufts was 7-1 in conference play and 15-3 overall.

The Ephs were ranked 24rd in the most recent National Fast Pitch Coaches Association’s Top 25. Williams is also, however, ranked No. 1 in the first NCAA Division III New England rankings. Williams is the only NESCAC school ranked in the New England poll. Brandeis is second, with Eastern Connecticut, Husson and Babson rounding out the top five.

Since 2012 only two schools have won NESCAC tournament titles. Those are the two teams playing this weekend at Cole Field.

Williams had a three-year streak stopped when Tufts beat the Ephs 3-2 in the 2019 championship game. Williams won NESCAC trophies in 2016, 2017 and 2018. Tufts had won the five before the Williams streak.

The last time the two teams came to Williamstown was 2014. The Jumbos beat Williams 4-1 on Saturday and 10-2 on Sunday to take home the hardware.

Williams enters the weekend with NESCAC’s No. 4 team batting average in .328, while Tufts is fifth at .325. The Jumbos have the best conference earned-run average at 1.96, while Williams is No. 2 at 2.65. Tufts leads the conference with 123 runs scored and Williams is fourth at 79.

The Ephs have been led by Mapes, a senior from Corona, Calif., who took the spring 2020 semester off when the season was cancelled, and elected to come back this year.

Earning her second pitcher-of-the-week honor in as many weeks, she threw a pair of complete games in the regular season finale against Wesleyan. She beat the Cardinals 2-1 on Saturday and 4-1 on Sunday. She struck out 14, gave up six hits and walked four in her two complete games.

For the season, she is 7-0 with a 2.64 ERA. Mapes is also hitting .419 with three home runs. She’s second on the team to Gabi Medevene-Cirigliano, who has five homers.

Whoever wins this weekend will have to wait another week to find out if it has earned a berth in the NCAA Division III Tournment. The selection show is scheduled for Monday, May 17.

Two of the nation’s best Division III lacrosse teams will hit the turf in Williamstown Saturday for the conference championship.

The Jumbos have won nine of the last 10 NESCAC tournaments, including the 2019 event when the Jumbos beat Williams 17-16 in overtime. That loss didn’t seem to bother coach George McCormack’s team much, because it went on to play in the NCAA Division III Final Four that year.

The Ephs, meanwhile, have not won a NESCAC championship since the upset run in 2008. That year, the sixth-seeded Ephs beat No. 3 Tufts 14-5 in the quarterfinals, then upset top-seed Middlebury 11-10 in overtime in the semifinals and claimed the trophy with a 9-4 win over No. 4 Bowdoin.

Williams has, however not beaten Tufts in tournament play since them. Tufts won in the 2010 quarterfinal round, and beat Williams in the 2014 and 2016 semifinals.

According to the first NCAA Division III regional rankings for 2021, Tufts is No. 1 and Williams is No. 2.

Tufts has four of the top 10 scorers in NESCAC on its roster. Senior attack Max Waldbaum has 19 goals while junior attack Mac Bredahl has a NESCAC-best 28 assists.

Williams’ top offensive player is senior attack Cory Lund, who is second in the conference with 16 goals and he has scored four goals a game.

Gahegan leads NESCAC with an 8.05 goals-against average, at least among keepers who have played 100 minutes or more. He earned the player of the week honors by making 17 saves in a 9-8 overtime win against Trinity that clinched the West title. He had five big saves in the fourth quarter and made a huge stop in overtime for the Ephs.

The NCAA Division III selection show is scheduled for Sunday at 9 p.m.

Williams and Tufts, that sounds familiar, will head to the Williams courts on Saturday for the NESCAC championship.

The winner will then wait to hear if it makes the NCAA Division III Tournament. The selection show is scheduled for Monday.