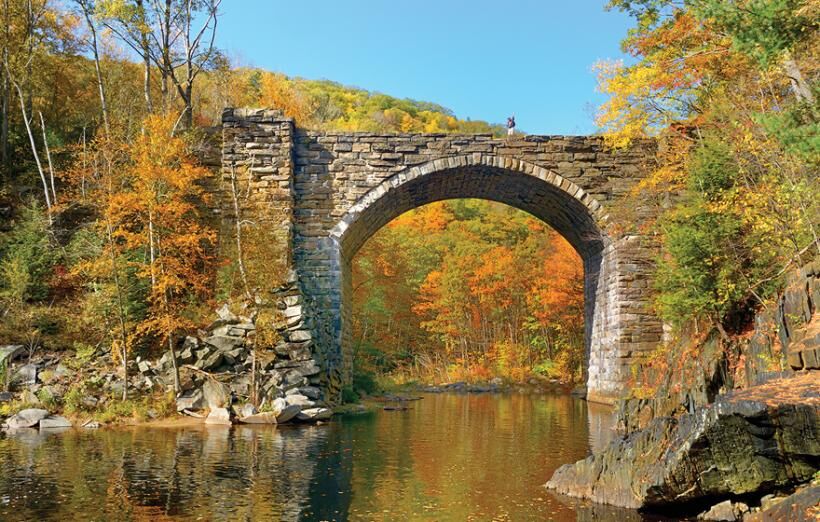 Built in 1840, part of the Keystone Arches in Middlefield and Becket were designated as National Historic Landmarks earlier this year. 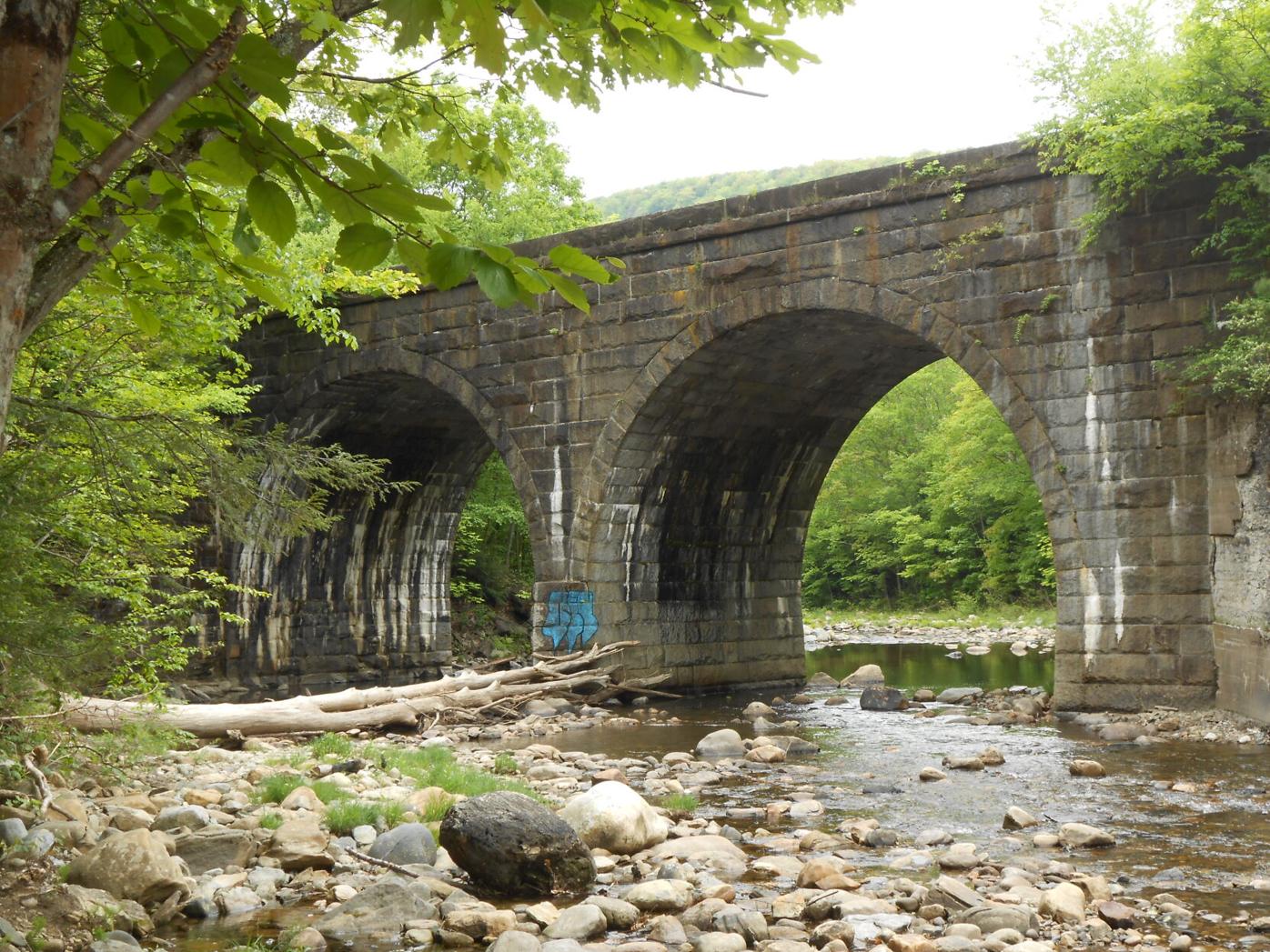 The story of the Keystone Arches path toward designation begins with former Middlefield resident Jill Lane and her frequent walks in the woods with her husband.

In my April 10, 2021 column, I did an article on the Keystone Arch Bridges (KAB) in Middlefield and Becket. They had recently been designated as National Historic Landmarks by the U.S. Department of Interior. The Federal designation was the result of a combined effort of cultural and conservation partners. The application for the landmark designation to the DOI was filed in 2013 by the Friends of Keystone Arches and the Wild and Scenic Westfield River Committee with a unanimous endorsement by the Massachusetts Fisheries and Wildlife Board.

Also included in the National Historic Landmark designation was the Chester Factory Depot, an important stopping point for the railroad, where additional engines were added to westbound trains prior to traversing the steeper grades to the west. It is a contributing element of the Chester Factory Village Historic District. The two stone bridges included in the landmark designation, as well as the historic roadbed, are part of the Middlefield–Becket Stone Arch Railroad Bridge District.

That was the culmination of a lot of work by various people and organizations. So, who got the ball rolling to protect those arches?

Well, according to Jill Lane, former resident of Middlefield who now resides in Florida, it was her and Nancy Burnham. In the late 1970s Jill and her late husband Fran lived in Bancroft (a hamlet of Becket). One day they walked down the tracks, went into the woods and found the arches and they were absolutely gorgeous. They were baffled in the way they were, just hidden there in the woods. Once discovered, Jill and Fran would frequently walk down to see them. At the time, they didn’t realize how steeped in history those arches were.

According to Jill. the arches were soon after discovered by people from Springfield who came up into the woods and vandalized them. At first, they were dumping cars over the arches but then they started to pry each of the stones off and push them down into the West Branch of the Westfield River. It tore Jill up to see them being destroyed so she determined that something should be done. All she wanted to do was to keep them from being destroyed. She asked the Good Lord to please help her stop the vandalism.

Jill knew the late Nancy Burnham, who also lived in Middlefield, and asked her what they could do. Nancy was from New York and she knew who to contact and she got in touch with the right people. “Nancy had a lot of pull and knew what to do and we both worked together on it,” said Jill. (Incidentally, Nancy’s last name, Burnham, is the B in B&M Baked Beans Company).

“Save the Arches was our theme,” said Jill, “and we did. It took two solid years of hard work, but we had a good time.”

In fact, Jill to this day has a chest filled with documentation (paperwork, pictures, etc.) of their work.

“We worked our butts off. If it wasn’t for Nancy Burnham, her friend Ann Jewett and me, the arches wouldn’t even be there,” said Jill.

They started the project in 1978 working side-by-side with Charles Lennon from the Westfield Historical Commission. He brought other representatives from the Historic Commission with him. Charles completed the paperwork and sent it to the Boston Historical Commission. Boston HC requested that they get pictures of all the houses 100 years of age and older in the towns of Chester, Middlefield and Becket. They worked with the historic commissions of those towns getting the pictures in order to establish a historic domain.

The Boston HC sent the documentation to Washington, D.C. and, according to Jill, they were absolutely flabbergasted by it. In 1980 they got notice from the Massachusetts Governor informing them that Washington felt that the Arches were worthy of national protection. Finally, in 1980 they were able to get all nine of the Arches from Chester to Middlefield listed in the National Register of Historic Places. A television station out of Boston sent reporters to cover the story when they found out that the Arches were put on the Register and they acknowledged Jill and Nancy. (A bronze plaque was subsequently sent up, but by the time it arrived in 1983, Jill and Fran had moved to North Carolina and she doesn’t know what became of it.)

Listing as a National Historic Landmark is a higher designation, and there are only 2,600 such landmarks in the US. A National Historic Landmark is a building, district, object, site or structure that is officially recognized by the United States government for its outstanding historical significance. This designation is the highest available and is the same category as the Statue of Liberty, the Washington Monument or Mount Rushmore. To qualify, sites must demonstrate national significance. The listing must be prepared by experts in the field with preference to firms who have prepared listings in the past, in KAB’s case, The Public Archeology Laboratories in Pawtucket, R.I.

The cost; $35,000, was funded by Wild & Scenic. It was filed in partnership with the National Park Service and the Department of the Interior.

Obviously, the work of Nancy, Jill and Charles Lennon photographing the old buildings, towns, bridges and area significantly contributed to the efforts of ultimately getting two of the bridges listed as National Historic Landmarks. Such a listing is a really big deal and Jill should be very proud to have started the ball rolling with her friend Nancy which led to such an important outcome.

Dave Pierce, President of The Chester Foundation, Inc. and Friends of the Keystone Arches built a trail showcasing a section of the Chester & Becket Railroad (The Chester & Becket or C&B Trail) on the J.J. Kelly Wildlife Area in Chester and received a grant to build an urban extension for that through downtown Chester, ending up at the rail station. All these efforts are geared toward telling the story of Chester’s unique history, with a particular focus on rail, to promote growth, tourism and preservation. In 1990, there was a ribbon cutting in Chester and he contacted Nancy and Jill (who then lived in Florida) and representatives from the Boston Historical Society. Nancy and Jill were acknowledged as the ones that initiated the preservation of the arches.

In partnership with the National Park Service/Dept. of the Interior, they helped mobilize volunteers and paid professionals to stabilize and repair the two Arches owned by Massachusetts Fish & Wildlife at the Walnut Hill Conservation Area. The Westfield River Wild & Scenic Committee is a ready and frequent partner in the ongoing work along with them.

Even though this is my second column addressing the Keystone Arches, I have barely scratched the surface. Click onto keystonearches.com to find out even more about the amazing history of these arches, the people who traveled over them and the people involved to protect and preserve them.

Due to a recent change in the regulations, the early Canada Goose hunting season now opens on Sept. 1. Be sure to check the waterfowl regulations. More to come on early fall hunting in next week’s column.