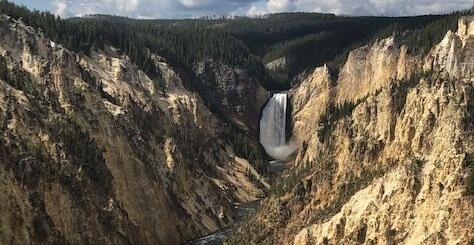 The Grand Canyon of Yellowstone. 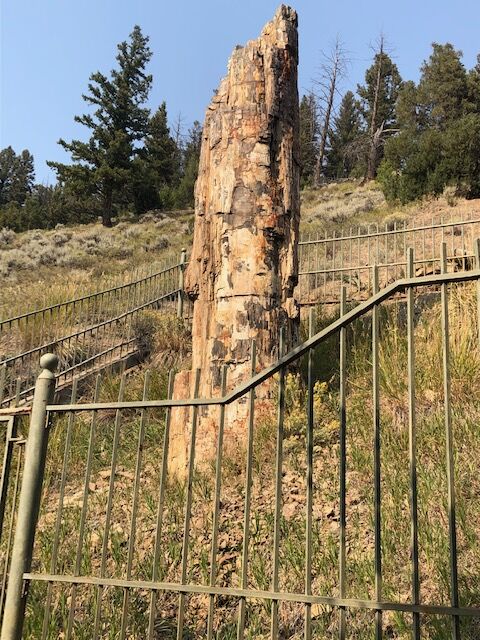 Last week, this column was about a 10-day flyfishing trip taken by me and three other local anglers to Yellowstone National Park (YNP), Montana and Idaho. After that trip was over, my wife Jan then joined me in Bozeman, Montana to do some sightseeing in Yellowstone National Park. It was time to pack the fishing stuff and lift my eyes from the gin clear waters and rising fish and look at the beautiful surroundings.

Why vacation in YNP? Well, it’s an interesting place. It’s the world’s first and arguably most famous, national park and is home to one of the planet’s largest and potentially most destructive volcanoes. The Yellowstone caldera complex is so massive that it can really be appreciated only from the air. But although the caldera isn’t always visible on the ground, it’s certainly no secret: Copious thermal features like hot springs and geyser basins dot the landscape and have attracted people to the uniquely beautiful and ecologically rich area for at least 11,000 years. That’s about the time Native Americans started hunting bison and bighorn sheep, fished for Cutthroat trout, and gathered bitterroot and camas bulbs there. (Incidentally, a caldera is not the same thing as a crater. Craters are formed by the outward explosion of rocks and other materials from a volcano, whereas calderas are formed by the inward collapse of a volcano.)

After driving to Gardiner, Montata and settling into our room at the Yellowstone Bear’s Den, we ate at the Iron Horse Bar and Grill. On the menu was bison shepherd’s pie. It was the first time I ever ate buffalo meat and it was delicious. Jan ordered a different meal, being not quite ready to eat buffalo.

The following morning, we entered YNP through the North Entrance, drove to the Mammoth Hot Springs Historic District, where we saw wild elk grazing on the lawns, (no hunting allowed in the park) and we later walked the boardwalks at Mammoth Hot Springs. At an altitude of over 6,700 feet, it is a large complex of hot springs on a hill of travertine (terrestrial limestone). It was created over thousands of years as hot water from the springs cooled and deposited calcium carbonate. Truly a sight to see.

From there we drove to the Lamar Valley (often called America’s Serengeti for its large and easy-to-see populations of large animals). There we saw lots of buffalo where they roam free and frequently cross the roads and hold up traffic. Visitors don’t mind though, for it affords opportunities to see and photograph them close-up. It was Jan’s first live sighting of them and she was quite impressed. In the Valley, we also saw elk and antelope. Some people parked along the road were using spotting telescopes looking for grizzly bears and black wolves.

While there, we visited Soda Butte, where my fellow anglers and I fished the creek the previous week. The butte is all that is left of a hot spring cone located just off the road in the valley’s east side.

On the way back to Gardiner, we stopped to see a petrified tree, basically a redwood similar to those currently in California. It was a clue to the warmer, damper landscape that once existed in YNP. When a chain of volcanoes erupted there in the Eocene times, 50 million years ago they triggered massive landslides. The rolling mix of ash, water and sand buried whole forests. Before the trees could rot, abundant silica in the volcano flow plugged the living cells creating forests of stone. What an awesome feeling standing near something that is 50 million years old!

On our second day, we visited the Upper Geyser Basin which is home to the largest number of this fragile feature found in the Park. Within one square mile there are at least 150 of these hydrothermal wonders. Of this only five major geysers are predicted regularly by the naturalist staff. They are the Castle, Grand, Daisy, Riverside, and of course, Old Faithful. There are many smaller geysers to be seen and marveled at in this basin as well as numerous hot springs. We spent the whole day there seeing as many of them as we could. It is said that YNP as a whole, possesses close to 60 percent of the world’s geysers.

On Day 3, we traveled south past Yellowstone Lake headed for the Park’s South Entrance into Wyoming. Yellowstone Lake lies at an altitude of 7,730 feet above sea level and is the largest body of water in North America, and the second largest in the world, at so high an elevation. It stretches 20 miles long and 14 miles across and its shorelines are dotted with geothermal features.

After leaving Yellowstone Lake, we traveled south into Wyoming along the John D. Rockefeller, Jr. Memorial Parkway to see the Teton Mountains, a segment of the Middle Rocky Mountains. They extend 40 miles across northwestern Wyoming, from the southern boundary of YNP and into southeastern Idaho. The peaks of the Teton Mountain Range are regal and imposing as they make one of the boldest geologic statements in the Rockies. With no foothills to suggest their presence, they rise through steep conifer forests into alpine meadows strewn with wildflowers, past blue and white glaciers to naked granite pinnacles.

We viewed the Tetons from Jackson Lake, a glacially-carved, approximately 400-foot-deep lake. But more than a century ago it was impounded, and today the Jackson Lake Dam adds about 37 feet of depth — or 847,000 acre-feet of stored water. This summer, 90-to-95-percent of that added water was expected to go downstream into Idaho, ultimately to irrigate potato fields in Idaho’s Snake River plain and grow crops for cattle. Where we were at the boat ramp near the Colter Bay Marina, the water was gone and nothing but docks were seen on dry land and the 60 boats normally anchored there for the summer had been trailered away. As far as we could see, there existed a lake with no water.

On our last day, we visited the Grand Canyon of the Yellowstone. About 640,000 years ago, a huge volcanic eruption occurred in Yellowstone, emptying a large underground chamber of magma (partially molten rock). Volcanic ash spread for thousands of miles. The roof of this chamber slowly collapsed, forming a giant caldera 30 miles across, 45 miles long. The caldera began to fill with lava and sediments. Infilling of lava flows continued for thousands of years. Scientists think some of it filled in with rock and sediments about 150,000 years ago. This paleo-canyon was not as deep, wide or long as the canyon that’s there now. Past and current hydrothermal activity altered and weakened the rhyolite, making the rocks softer. The Yellowstone River eroded these weakened rocks to deepen and widen the canyon, a process that continues today. The current canyon begins at Lower Falls and ends downstream from Tower Falls.

The multi-hued rocks of the canyon result from the hydrothermally altered rhyolite and sediments. There are dark orange, brown, and green areas near the river that indicate still-active hydrothermal features. Their activity — and that of water, wind and earthquakes — continue to sculpt the canyon.

Jan and I agree that the Yellowstone Grand Canyon was the most remarkable sight of them all in YNP. (Yes, even greater than Old Faithful). There are boardwalks and viewing areas around the canyon rim so that you can see both waterfalls. It’s kind of scary looking down the canyon walls with the river so far below that you could barely see it. Definitely white-knuckle time. Jan said that she held her cell phone camera so tight that she feared it would pop out of her hands and drop into the canyon.

There were many other amazing sights in the Park which would require several more columns to describe. You can search the internet to see pictures of all the amazing sights mentioned here. At the risk of sounding like tour guides, Jan and I highly recommend that you keep YNP in your future travel plans.