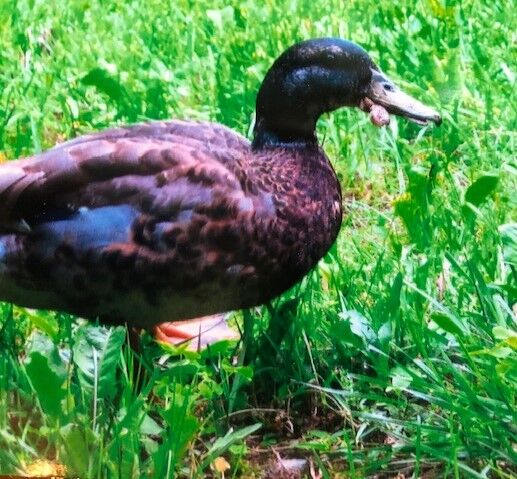 Raymour the duck, pictured here, became popular with the community around Onota Lake over the summer. 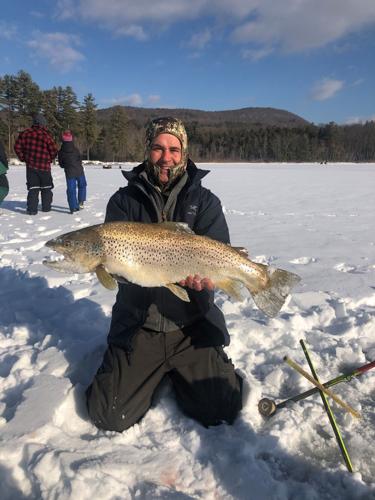 Jamie Pollard of Hinsdale with his 15 lbs.8 lb brown trout that he caught at the Stockbridge Bowl.

Well, chalk up another dismal year. At the beginning of 2021, we were hoping that things would be better than 2020, but it wasn’t to be. We remained a divided nation, arguing over the wearing of masks, getting Covid shots, social distancing, the 2020 presidential election and more. We nearly lost our democracy on January 6, reached 800,000 Covid related deaths, were still plagued by one variant after another of Covid, experienced the great resignation causing shortages of service and produce, which in turn resulted in high consumer prices. There were fights on commercial airplanes, etc., etc. And, oh yes, let us not forget about the devastating fires, floods, tornadoes and hurricanes.

Personally, other than during wartime years, I can’t remember a worse time for our nation. Day after day, we were besieged with bad news making it difficult to be positive and upbeat.

Hopefully, during the past year, this column got our minds off of some of the negativity that constantly surrounded us. So, what were some of the more interesting subjects covered last year? Unfortunately, I can’t cover them all but here are some of the more memorable ones:

To start January off on a positive note, we visited two Berkshire Natural Resources Council properties: its 550-acre Clam River property in Sandisfield and its Old Mill Trail in Dalton/Hinsdale and recommended readers do likewise. MassWildlife reported record or near-record 2020 deer, bear and wild turkey harvests. However; during that month we mourned the loss of Raymond “Skip” Whalen, a highly respected outdoor sportsman who received many awards from the Berkshire County League of Sportsmen (BCLS) and other sportsmen’s organizations.

In February, we covered several ice fishing stories. Young Allison caught a 25 ½ inch, 4 lbs 2 oz chain pickerel out of Laurel Lake for which she will definitely receive a bronze pin in the MA Youth Sportfishing Award Category. Jamie Pollard of Hinsdale caught a 15.8 lbs 32 ¼ inches long brown trout out of Stockbridge Bowl. Surely it will capture the gold pin in the Sportfishing Award Program. There was a big largemouth bass weighing 6 lbs 14 oz caught out of Laurel Lake by 11-year-old Nolan Bloomrose of Blanford. He caught it during a Whitetails Unlimited ice fishing derby and he will also win a bronze pin.

In March, MassWildlife announced that there were 13 gold pin winners from the Berkshires in several fish categories in the Sportfishing Award Program. Joshua Christman of Pittsfield was named the MA Adult Catch and Keep Angler of the Year. Eight of the 13 gold pins were won by Joshua or his 7 year old daughter Alice or his 5-year-old son Gabriel.

I also did a column recalling memorable ice fishing scenes on our lakes last winter highlighting an iceboat and a unicycle rider.

In April we congratulated Henry Sweren for being elected the Chairman of MA/RI Council of Trout Unlimited (TU). Later that month, we mourned the loss of Paul Ouellette, of Lanesborough, a well-known local flyfisherman and deer hunter. He had received awards from the BCLS and Taconic TU. We also did an article on the Keystone Arches in Becket/Chesterfield.

In May there was an article on bald eagles succumbing to rodenticides. We covered the Wild Acres fishing derby. Young Gabriel Christman pulled out of Laurel Lake a 21 1/2lbs carp. We covered a trout research program being conducted by MassWildlife on the Swift River.

In June we wrote an article about Mark Markham and the 10 lbs brown trout that he caught out of Onota Lake. Joshua Christman also hauled a couple of others out of there near that same size. There was an article about a rare turkey taken on Mount Greylock by Karen Fachini of Pownal, VT. It had 7 beards!

In June we did an article on the Youth Outreach Fishing Derby at Reynolds Pond in Cheshire. There was an article about wild tiger trout swimming in our local waters. Also, a big bowfin fish was taken out of Onota Lake that month by Crystal Taylor. There was an article entitled “poacher’s paradise”. It was about the ridiculously low fines and penalties assessed to those who break the fish and game laws. It was in June when we got a look at the potential MassWildlife license fee increase. A couple of friends and I took a wonderful flyfishing trip to the AuSable River.

In July I did an article about flyfishing the Westfield River years ago and my using the jaw’s harp to try to get another angler out of a fishing hole in which I wanted to fish. Remember the sounds -“Boing, boing”. Shame on me! There was an article about a 7 to 9 lbs smallmouth bass, caught by Michael Fabrizio, that came out of Onota Lake.

And then there was Raymour. He was the duck with the damaged bill that talked Onota Lake shore resident Ron Smith into hand feeding him for about 2 years. Ironically, that duck disappeared on the very day the article came out. For 3 weeks people were looking high and low for him but to no avail. It is believed that he was taken away by a resident bald eagle. My hopes rose recently when I received a report of his sighting. But when I heard that the sighting was by a fellow who also said he saw Elvis Presley last fall at a barn dance over in Berlin, NY, well….

In August, there was an article about MassWildlife’s prescribed fires. Also, there was an article about beginner’s luck by fishermen (Luis Martinez from Ortonville, MI) who caught a record Chinook (King) Salmon out of Lake Michigan. It weighed 47.86 lbs and measured 47.5 inches. Unfortunately, that month we received news that another eagle and other birds fell victim to rodenticides/pesticides.

In September, there was a follow-up article on the Keystone Arches. We received word that MassWildlife had settled on its new license and fee schedule. There was an announcement of another deer disease spreading across the nation, Epizootic Hemorrhagic Disease (EHD). A large carp was taken out of Onota Lake by Anthony Barone. There was an article about the many acquisitions of land and conservations restrictions in the Berkshires by MassWildlife and an article speculating as to why people fish.

In October there were two articles about Yellowstone National Park. The first was about local anglers Attorney Mike Shepard, Craig Smith, Paul Knauth and me doing some flyfishing out there. Craig cleaned our clocks by consistently catching the most and largest fish every day. The second trip was a sightseeing one with my wife Jan and me. There was a touching bird dog article written by Gary Scarafoni entitled “Angie’s Last Retrieve”. Also an article about some buddies fishing for large brook trout in Labrador and the possibility of a world record being caught there. Jeff Vincent hit the “grand slam” while fishing the Salmon River in NY which feeds Lake Ontario. He caught brown trout, steelhead and King, Coho and an Atlantic Salmon.

In November, there was an article about paraplegic deer hunters and that 3 deer were taken by them in the Berkshires. News came out that month that Covid was discovered in the nation’s deer population. A stone bench was created on Lenox Mountain in honor of the late George “Gige” Darey. George Wislocki proposed a toast in his honor. There was an article about “precious deer hunting memories.” Oh, how they linger.

In December, we received news of how the recently passed Infrastructure legislation will provide funds for, among other things, the removal and replacement of impediments which will help fish migrate upstream to spawn. We did an article on the hand pulling of water chestnuts in Three Mile Pond by DFW staff. Also, an article about the fight to the death by two large deer that got their antlers hopelessly entangled while fighting. Sadly, we lost two notable sports columnists, Frank Sousa of the Springfield Republican and Mark Blazis of the Worcester Telegraph and Gazette.

Thanks for taking the time to read the columns last year and hopefully you’ll check them out again this year. Good Lord willing, I’ll still be cranking them out.

Let’s hope and pray that things will be better for us this year.

Happy New Year and be safe!