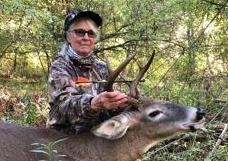 Sandy Bushey of Lanesborough poses with her recently-harvested 8-point buck. 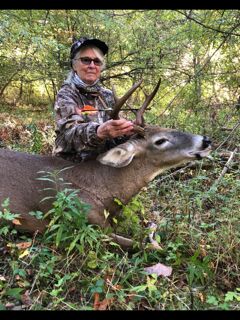 Sandy Bushey of Lanesborough poses with her recently-harvested 8-point buck.

The Division of Ecological Restoration (DER) restores rivers, wetlands and watersheds for the benefit of people and the environment. Its projects improve public safety and help people and nature adapt to climate change. Restoration creates jobs, too, with 12.5 jobs created or maintained for every $1 million invested in restoration projects. Demand for restoration assistance continues to grow across the Commonwealth, even during the last six months of the pandemic.

In its most recent report, Ebb & Flow, DER director Beth Lambert shared updates on river and wetland restoration projects that recently began or will soon begin construction in our area.

“Many of our restoration projects result in new open space or improved trails, where residents of the Commonwealth can witness the resilience of nature for themselves,” she wrote. “Watching a river or wetland recover from past damage brings hope and optimism. Spending time in nature brings solace. This is more important to us now than ever before.”

The report went on and listed some recently completed or on-going projects:

Kinne Brook Restoration — DER and partners replaced an undersized and failing culvert with a larger, safer structure that allows full upstream and downstream movement of aquatic species and reduces the risk of road damage and failure in flood conditions. As a high-quality cold-water tributary to the Middle Branch of the Westfield River near the town of Chester, this work also benefits trout and other cold-water-dependent species in a 10-mile-long reach of Kinne Brook. This project was completed this past June.

West Branch of the Housatonic River Restoration — DER, the city of Pittsfield, and other partners removed the obsolete and hazardous Tel-Electric (or Mill Street) Dam, located on the West Branch of the Housatonic River. The removal of this dam has strengthened community resilience to the impacts of climate change, restored natural river processes, and improved the ecological health of the river. This project was completed this past June.

River Road Culvert Replacement — DER is working with the town of Windsor to replace an undersized and deteriorated culvert on a tributary to the east branch of the Westfield River with a larger, safer structure that meets road-stream crossing standards. The upper Westfield River and its tributaries provide some of the best cold-water and riverine fish communities in the Commonwealth and the new culvert will enable fish and wildlife to access these high-quality habitats, as well as enhancing public safety, storm resiliency, and general ecological conditions. Construction should be under way now.

West Road Culvert — DER provided grant funding this past year to the town of Clarksburg to conduct field data collection and analysis, design and engineering, and permitting for a culvert replacement on Bear Swamp Brook. Upgrading the culvert allows cold-water species to access critical cold-water streams, particularly important as the climate warms and stream temperature increases. The road also serves as a primary emergency access route

River Road Culvert — DER provided grant funding this past year to the town of Windsor to replace a perched, undersized and deteriorated culvert on a tributary to the east branch of the Westfield River with a larger, safer structure that meets road-stream crossing standards. The upper Westfield River and tributaries provide some of the best cold-water and fluvial fish communities in the Commonwealth. The new culvert will enable fish and wildlife to access these high-quality habitats. Upgrading this culvert enhances public safety, storm resiliency and ecological conditions. The grant will fund construction work.

Pecks Brook at Valentine Road (Pittsfield) — The Housatonic watershed has many recreational lakes that are managed to control invasive species and protect infrastructure. These management practices, which include drawdown of lakes in the fall and refill in the spring, can yield unnatural downstream flow patterns that disrupt the lifecycle of resident aquatic organisms and alter the health of the ecosystem. The goal of this project is to improve downstream flows while also achieving lake management goals by improving dam operation.

Becker Pond Dam — The Schenob Brook Restoration in Sheffield seeks to remove the Becker (neé Dombrowski) Pond Dam, located along an unnamed tributary to Schenob Brook. This project, being completed in partnership with The Nature Conservancy, will restore natural riverine processes, benefitting wild Eastern brook trout and other cold-water dependent species within Sages Ravine and the Schenob Brook Area of Critical Environmental Concern.

Working with the offices of Congressman Richard Neal and Senators Ed Markey and Elizabeth Warren, along with the state legislative delegation from the Northern Berkshires, HRR and the city, seek funding from Congress through multi-million-dollar infrastructure/climate resilience bills or pandemic-related stimulus packages. The goal is to fund and build a modern flood control system that is safe, accessible, healthy and attractive.

To support these efforts, the Mass. DER will fund a consultant to advise HRR and the city on ways to strengthen and develop a more robust local management entity to guide the entire flood control project. The need for this was highlighted when the city recently listed flooding in the Municipal Vulnerability Plan as its No. 1 risk concern.

Persistence pays off for lady bowhunterHarvesting a deer with a bow and arrow has been a goal of Sandy Bushey of Lanesborough for some 15 years. On Oct. 9, at 7:57 a.m., while hunting out of a tree stand in Old Chatham, N.Y., she accomplished that goal. At a distance of 15 yards, she dropped an 8-point buck. She climbed out of her tree stand and tracked it solo for 100 yards. After finding it, she called family members for assistance to get it out of the woods. The buck weighed 170 pounds (before being field dressed). She used a Browning compound bow with a lighted nock on the arrow and a 42-pound draw weight.

Sandy is no novice to deer hunting, for she has taken a total of 67 bucks over a span of 35 years of deer hunting. Up until this year, she has taken them using a shotgun, rifles and muzzleloaders. This was the first buck she ever harvested with a bow.

Over the years she has hunted in Massachusetts, New York State and Canada. Deer from N.Y. and Canada must be processed and deboned before bringing them into Mass. Once done, she can add the meat from her deer to the meat from a 6-point buck that her husband Ed took on opening day in New York State.

Sandy plans on hunting with her camera during archery seasons now that she has accomplished getting a buck with a bow.

Incidentally, Ed and Sandy have been directors of the Pittsfield Sportsmen’s Club for many years.

Freshwater Jellyfish in our lakes?In his October report to the Berkshire County League of Sportsmen, district supervisor Andrew Madden mentioned that freshwater jellyfish have been discovered in Ashmere Lake in Hinsdale. He said that they are not considered invasive, but they only pop up in local lakes in certain years. You might not see them in ponds for 10 years. Something about temperature, water conditions or whatever causes them to show up in some years. They have a clear or translucent white bell-shaped body about the size of a dime or nickel. They can be seen floating or swimming gently just below the surface of the water, but unlike some marine jellyfish it does not pose a hazard to swimmers.

They also exist in West Lake and Upper Spectacle Pond in Sandisfield, Center Pond in Becket and other local waters. There is a video circulating on Facebook which clearly shows them on Ashmere Lake.