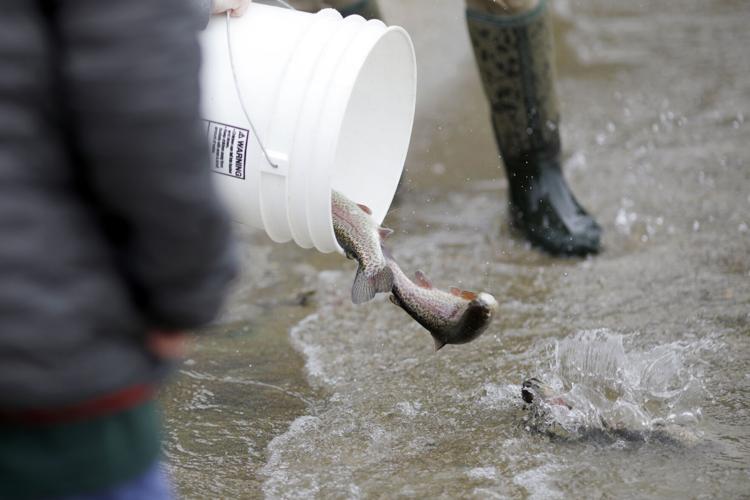 Bucket-by-bucket, visitors helped to release around 800 rainbow trout into Onota Lake in Pittsfield during an Earth Day fish stocking event with MassWildlife. 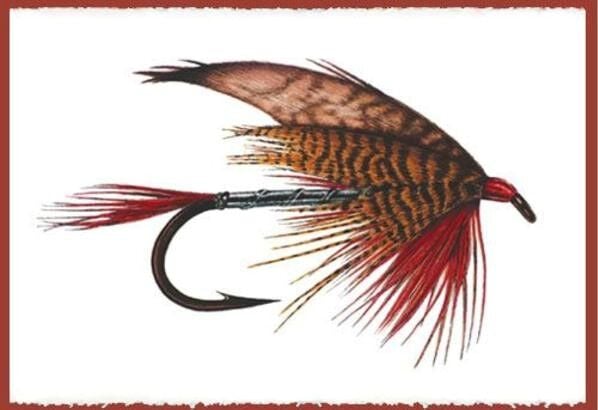 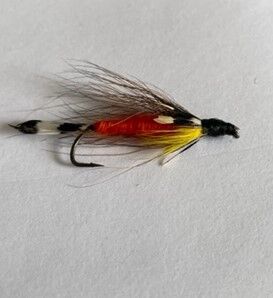 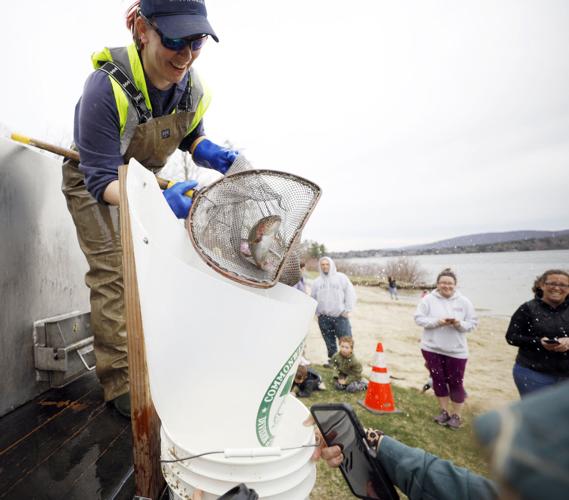 MassWildlife aquatic biologist Leanda Fontaine fills each visitor’s bucket with rainbow trout from a special holding tank on a truck. The buckets are then rushed to the water and released into Onota Lake in Pittsfield as part of a special Earth Day fish stocking event.

Aha! I’ll bet the fly fishermen are already onto me. They know that I am not writing about snowbirds returning from Florida but rather aquatic insects, the various mayflies, caddisflies, and stoneflies.

Two of the earliest aquatic insects to appear each year are the Little Black Stoneflies which are part of the Capniidae family (probably Allocapnia granulata) and Little Brown Stoneflies which are part of the Plecoptera family. They crawl out of the water to the snowy bank edges to hatch and become adults. Different species of stoneflies hatch from early spring into the summer. They are the Stones to which I referred above. The Caddises mentioned are caddisflies from the family Trichoptera,

The Gordons, Hendricksons, Foxes, Drakes, Cahills, Duns, Wulffs and Adams are all mayflies. (Mayflies are aquatic insects belonging to the order Ephemeroptera). The flies don’t just hatch out in May, but basically from April through October, depending on the species. The Gordons I referred to are usually known as Quill Gordon (Epeorus-Pleurali), probably the first major mayfly to hatch in our waters. They are followed by the Blue Duns/Blue Quills (Paraleptophlebia), Dark or Light Hendricksons (Ephemerella Subvaria), Grey Foxes (Stenonema Fuscum), Green Drakes (Ehemera Guttulata) Light Cahills (Stenenoma), Yellow Drakes (Ephemere Varia), Golden Drakes (Potamanthidae), Slate Gray Drakes (Isonychia) and others.

Fly fishermen should not only know what the flying insect is, but what phase, sub-imago or imago as well as what their nymphal stage looks like. Sub-imagos are called duns by anglers and the imagoes (or adult flies) are called spinners. A good fly fisherman knows when each occurs and what they look like (color, size, characteristics, etc.). Mayflies morph from nymphs, hatch into duns and then morph again into spinners. In a way, fly fishermen have to be entomologists.

Certain aquatic insects live in different types of waters. For example, the Green Drake, one of our largest mayflies, like slow moving, sandy or muddy waters, whereas others like stoneflies prefer just the opposite. The successful fly fisherman needs to know this.

Obviously, all of this can be overwhelming to the beginner fly fisherman, but thanks to our predecessors, the numbers of families and species that are most common have been narrowed down considerably, so that we now know what species hatch in our areas and when they are in certain rivers and ponds.

To save money and for the enjoyment, many fly fishermen tie their own flies imitating the above aquatic insects and others such as dragonflies, damselflies, midges, etc. They tie terrestrial insects which are also important foods for trout such as grasshoppers, beetles, crickets, etc. They also tie imitations of crayfish, leeches, small fish, (called streamers) etc. Yes, they are called flies, too.

Many imitation flies such as the Quill Gordon, Hendrickson, Adams and Wulff patterns were actually named after their inventors or their friends.

For example, the Quill Gordon was designed by Theodore Gordon, an American writer who fished the Catskill region of New York State in the late 19th century through the early 20th century. He is often called the “father of the American school of dry fly fishing.

The Hendrickson was created in 1916 by Roy Steenrod. One day he was fishing the Lower Beaverkill River in New York with his friend A.E. Hendrickson, and saw bugs popping off the water. Roy named the imitation fly after his buddy. Its body is comprised of “the urine-stained underbelly from a vixen red fox”.

The Adams fly was designed by Leonard Halladay from Mayfield, Michigan in 1922, at the request of his friend Charles Adams, an attorney and judge from Ohio who was an avid dry fly fisher.

Some flies were named after rivers such as the Ausable Wulff. Now that’s an interesting fly. It was created and tied by the late Francis Betters who lived on the banks of the Ausable River in Wilmington, N.Y. He designed his fly using a pattern created by the late legendary fly fisherman Lee Wulff. Its body calls for cinnamon-colored Australian possum. Incidentally, it’s my favorite fly.

Another one of my favorites is the Gold Ribbed Hares Ear. The body of this fly is created from a course blend of underbody fur, along with the guard hairs from the ear of a rabbit.

An interesting streamer is called the Governor Weld (Pictured). The ingredients for constructing this fly are interesting: It uses a No. 6, 3X hook which represents the governor’s height (6-foot, 3-inch). The wing is matched strips of mottled wild turkey wing feather representing the official Massachusetts game bird which was signed into law by Governor Weld. Wood duck flank feather is used for the shoulder to signify the governor’s concern for waterfowl conservation. A silver body is used to represent the bright future of Massachusetts under Governor Weld’s leadership. Lastly, red thread is used to tie the fly and form the head, representing the governor’s red hair.

All materials are common to New England and up-state New York where the governor enjoyed many fishing adventures.

The fly was tied and created by Mike Freeman of Peabody, Massachusetts and Paul Nowak of Topsfield, Mass. I have a beautiful framed print of it which was produced by Massachusetts artist Ed Snyder, owner of Outdoor Arts. I don’t know what it is supposed to imitate. I haven’t caught many fish with this fly, but it is sure nice to look at.

The Mad River Special was created by the late legendary fly fisherman Charles Lahey of Pittsfield. He named the bucktail fly after the Mad River in Vermont, a river he loved to fish. The last time he fly fished, at the age of 101, he caught three rainbow trout with that fly. Incidentally, Charlie was incorporated into the North American Freshwater Fishing Hall of Fame in Hayward, Wisconsin in 2009.

Another interesting fly is named “The Butcher.” It was created in England by G.S. Jewhurst of Tunbridge, Kent. Originally, it was known as “Moon’s Fly,” after a Mr. Moon who was a butcher and tier. William Blacker renamed the fly “The Butcher” in 1838. It was so deadly that it was banned in some rivers over there.

So, if you are a glutton for punishment, you might consider taking up the sport of fly fishing. Everyone struggles with the casting aspect of it for a little while but most eventually get the hang of it. Don’t worry, you won’t make any mistakes that millions of others haven’t already made. I took it up in my 40s and the only regret that I have is that I didn’t take it up earlier. It’s a fascinating sport which has provided me many years of great enjoyment.

The following waters were scheduled to be stocked last week. The schedule was subject to change: Hop Brook in Tyringham and Lee; Laurel Lake; Pontoosuc Lake; Goose Pond; Onota Lake; Littleville Reservoir in Chester and Huntington; Green River — North in New Ashfield and Williamstown; Farmington River in Otis, Tolland and Sandisfield and Hemlock Brook in Williamstown.

Correction: In last week’s column I erroneously wrote that the spring turkey hunting season opened on April 25 and ends on May 22. It should have stated that it ends on May 21. Also, the youth turkey hunting day is today, not last Saturday as written. My apologies.