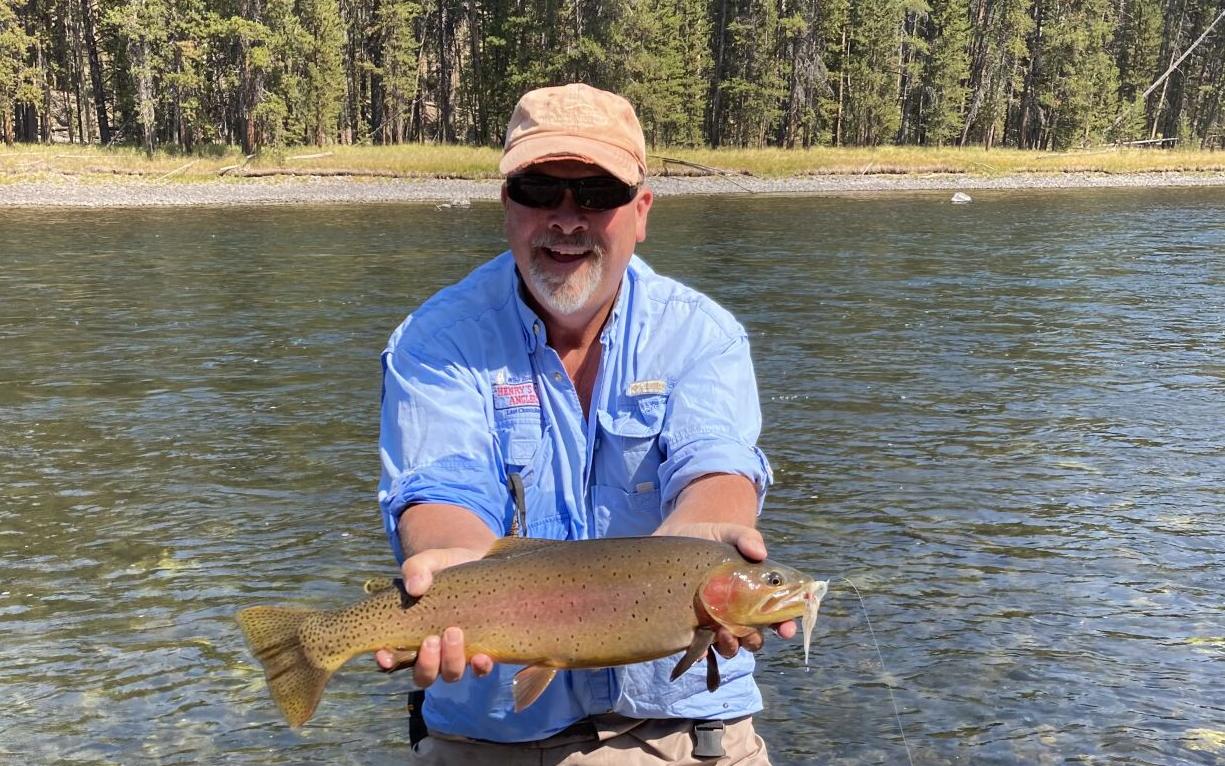 Craig Smith poses with just one of the many large trout he caught on a recent flyfishing trip out west. 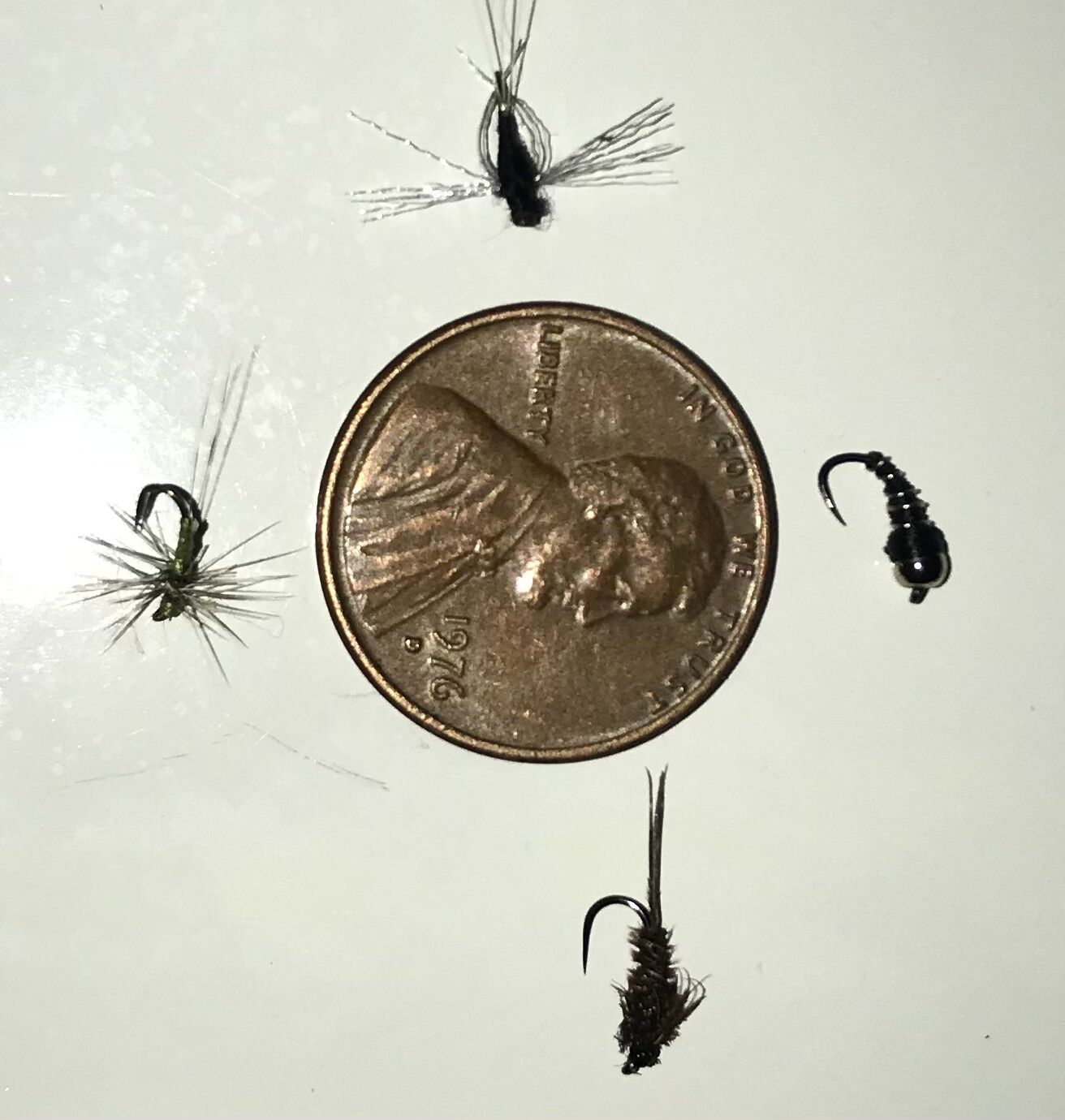 The group used flies smaller than a penny to catch 18-inch trout.

Recently, four of us traveled out to Montana, Wyoming and Idaho to do some flyfishing. Making up our party were Craig Smith and attorney Michael (Mike) Shepard from Dalton, Paul Knauth from Hinsdale and myself. We were going to spend 10 days fishing famous rivers in those areas, which included Yellowstone National Park (YNP). Rivers such as the Yellowstone, Gallatin, Gibbon, Madison, Teton, Henry’s Fork Rivers as well as some smaller waters such as the Slough Creek, Soda Butte Creek at Pebble Creek, Sentinel Creek and others. Our quarry were West Slope Cutthroat, Rainbow, Brook, Brown and Cutbow Trout. (A Cutbow is a hybrid fish between rainbow and cutthroat trout. They do occur naturally in the wild in areas where the native range of rainbow and cutthroat trout overlap). We familiarized ourselves with the YNP fishing regulations, such as: only catch-and-release, no felt-bottom waders, use of barbless hooks only, use of non-toxic weights, etc.

Craig and Mike usually teamed up to fish together, doing three float trips (Yellowstone River, Idaho’s Teton River and Henry’s Fork of the Snake River) and a day fishing the private waters of Nelson’s Creek on Nelson’s Farm in Montana, and they did very well. The remainder of the time they waded the rivers. Paul and I usually fished together and opted not to float but only wade the rivers.

To make a long story short, we all caught and released lots of nice trout. But one angler stood head and shoulders above us others and that was Craig. He consistently caught the most and the largest fish just about every day. One day, he caught six trout over 20 inches, and showed us pictures of them as proof. Every night, we would look at his cell phone pictures of the large fish that he caught that day. He made no secret as to what flies he used and how to fish them. He often lent us some of his flies and equipment, but although we used his tactics and caught some fish, we could not emulate his success. He has been fishing these rivers since he was a child and pretty much knows where and how to catch big trout. As a child, he accompanied his father who would frequently take three-week vacations there. When fishermen have good days, people say they are lucky. With Craig, it’s not luck, it’s out and out skill.

We all had good days and caught lots of fish. There was one short stretch of Soda Butte Creek where Mike and I in one day caught 11 Cutthroat Trout out of it.

With the altitude usually over 6,000 feet and afternoon temperatures frequently in the high 80’s, it didn’t take much to get winded. We usually had to hike 3 to 4 roundtrip miles wearing fishing boots and carrying backpacks to reach the good fishing spots, so we always carried two bottles of water to keep hydrated. A couple of days Paul and I did 6-mile roundtrips (uphill all of the way) to a great fishing spot on Slough Creek where there were trout swimming and rising all around us in the gin clear water. I never caught one but Paul caught a few. Even though the fish saw us, they didn’t stop their feeding activity. They simply were not interested in what we had to offer. Sometimes these big fish would only take tiny size 22-24 flies. Over the course of the 10 days of fishing, wearing fishing boots and carrying backpacks, I walked about 25 miles and Paul 30, based upon his pedometer.

There were no forest fires near us, but we could see the smoke when we looked at the distant hills. The color of the sun at sunset was usually orangish-red. Whether it was the altitude or the effects of the smoke, we all suffered nasal/sinus problems and nosebleeds every day.

There were signs everywhere warning us of the bears and to always carry bear spray. One day when Paul and I were hiking a mountain trail to reach a meadow on the other side of a ridge, we came upon a couple (from Florida) that had stopped and were looking at something ahead. It was a brown black bear gorging itself on chokecherries right on the edge of our trail. We must have waited 20 minutes and still it was in no rush to move on. Paul and I wanted to get to our fishing spot so we and the couple had to walk maybe 10 feet from it in order to get by. We tapped our walking sticks/wading staffs, and softly talked while Paul had his pepper spray canister aimed at it as we carefully walked by. He didn’t have to use it as the bear seemed to be more curious than aggressive. I’m not sure we would have been so lucky had it been a grizzly bear.

On this trip, we learned some new fishing techniques from Craig. One was using high density sinking line to get our dragonfly nymph flies to the river bottom and then to twitch them so that they would kick up mud. The Cutthroats went nuts over them. Another trick we learned from him was how to fish tiny creeks with grasshopper imitation flies. Basically, the method was not to get near the creeks (they were actually out of sight) cast your fly to an area where you thought the creek was, and listen. If you heard a splash then you raised the rod and hooked the fish. If you can see the creek, said Craig, then the fish can see you. It worked wonderfully, until the afternoon winds were tossing our fly lines all over the place.

Another new technique for me was “wet wading.” No waders but only wading shoes, with your legs exposed to the water. We all enjoyed fishing that way except for one morning when Mike and I fished the Gallatin River where the water temperature was 40 degrees. Obviously, we didn’t stay in that river too long.

I’ll never forget one place on Slough Creek when a herd of buffalo decided to drink and cross it where Paul and I were fishing, virtually surrounding us. Paul led the way out to some large boulders in the middle of the creek for protection, figuring they couldn’t stampede us there. He must have learned about that tactic from some old cowboy movies. Without getting into the particulars of that encounter, let’s just say that we came home with handfuls of buffalo hair. Another time, I put my net on the ground while I went a short distance to get a drink of water from my backpack. Before returning a big buffalo decided to lay down right next to it. After some time, it finally got up and ambled off, and I retrieved my net.

One day, we fished Henry’s Fork in Idaho. Where we fished was shallow, wide and filled with long weeds swaying in the current. The fish were just out of casting range, and the weeds prevented us from wading too far out to them. They acted like ropes around our legs and we just couldn’t get past them. They didn’t bother Craig for he managed to catch a nice brown trout.

All too soon, our fishing trip was over and it was time for Paul and Mike to fly back home. Craig was able to stay four more days and continued to send us pictures of the large fish that he continued to catch. It had been a wonderful fishing trip.

Within minutes after Paul and Mike’s plane took off from the Bozeman, Montana airport, my wife Jan flew in and we spent the next four days sightseeing YNP and the Teton Mountains in Wyoming. I’ll tell you about our sightseeing trip next week.