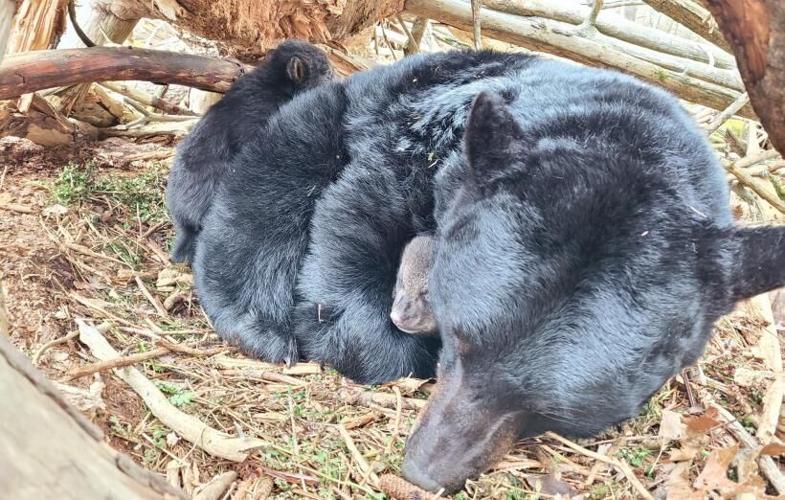 This past winter, MassWildlife biologists visited the dens of 27 female black bear. 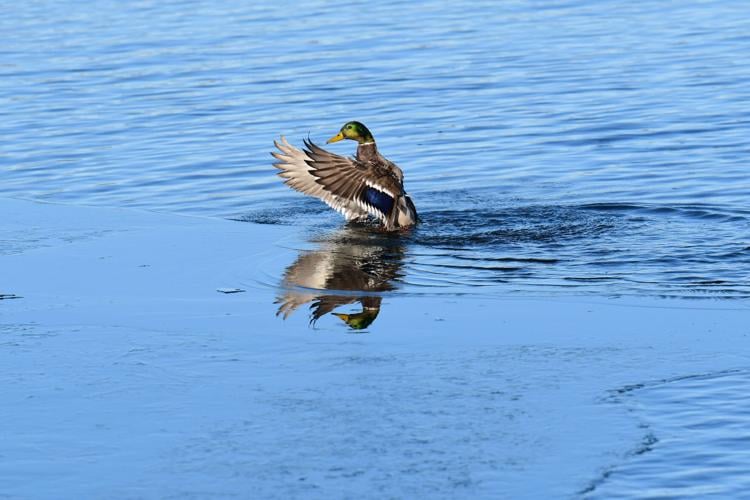 Mallard populations in New York and the northeast United States have declined significantly, leading to reduced bag limits starting in 2018. 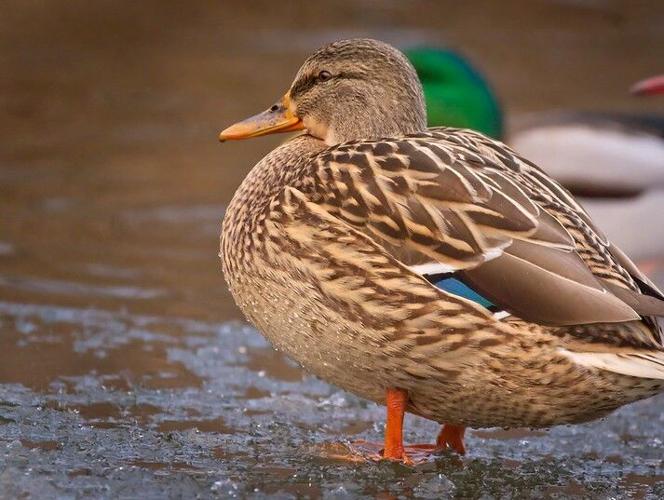 Mallards are commonly found in wetlands and urban ponds in the Atlantic Flyway in the northeast US, but there has been a puzzling population level decline of 1 percent annually since 1998.

MassWildlife Black Bear and Furbearer Biologist Dave Wattles informs us that every winter, MassWildlife biologists visit the dens of female black bears (sows), that have been previously fitted with radio tracking collars. Sows may be in their dens alone, with newborn cubs, or with yearling cubs born the previous winter. Biologists assess the condition of the bears, count the newborn cubs, and confirm the survival of the yearlings. This valuable data on survival and reproduction helps biologists model whether black bear populations are growing, declining, or remaining stable.

Winter dens can be a hollow tree or log, rock crevice, or a ground nest under fallen trees or brush. Once they locate a den, biologists immobilize the sow and gather information such as body condition, weight, and sex of cubs. They also evaluate collars for proper fit and function and replace them when needed. This past winter, biologists visited 27 dens. Discoveries included one sow with no cubs, four two-year-old females wearing yearling collars, 10 females with yearlings, and 11 females with newborn cubs. Sows ranged in age from two to 16 years old.

Black bear cubs are born small, blind and helpless. To give the mother a chance to bond with her cubs and for the cubs to grow, MassWildlife waits until the end of February before visiting dens of sows with newborns. The eleven females averaged 2.54 cubs, with one sow having four cubs.

Biologists are finding that the female bears they study in more suburban areas are very large, with weights averaging more than 250 pounds, compared to bears in more rural, forested areas averaging closer to 150 pounds. A second big takeaway from this winter’s research was how close to people bears will den. They had bear dens 10 yards off the back parking lot of a fire department, under a building on piling foundations, on the edge of a backyard, and in the middle of a construction yard. These bears had plenty of options to den in more remote locations but chose not to, indicating bears are finding supplemental food sources in suburban areas, such as unsecured garbage, bird feeders, and open compost. Biologists warn that human food sources are harmful to bears’ natural diets and put communities at added risk of unwanted conflicts.

In a recent New York Department of Environmental Conservation (DEC) newsletter entitled, “Banding Together to Explain Declines in Eastern Mallards,” it states that over the past 20 years, mallard populations in New York and the northeast United States have declined significantly, leading to reduced bag limits starting in 2018. To understand what factors may be contributing to the decline, DEC, Pennsylvania Game Commission, Ducks Unlimited, SUNY Brockport, and the University of Saskatchewan partnered with 22 state, federal, and non-governmental organizations to start one of the largest telemetry projects ever conducted in North America. The Commonwealth of Massachusetts is a participant.

Over the next four years, states and provinces in the Atlantic Flyway will be putting out over 1,100 GPS transmitters on female mallards to learn more about habitat use and migration timing and how these factors affect breeding success and survival. In the first year, DEC and partners deployed over 300 transmitters. Each transmitter can send tens of thousands of locations for two or three years. This project will give biologists and researchers a glimpse of what drives mallard populations and will help better inform mallard management in the Atlantic Flyway for years to come.

You can follow along by visiting the project website (atlantic-flyway-waterfowl-gps.weebly.com). It includes an interactive map that is updated periodically so you can follow these birds through migration in near real-time.

Mallards are commonly found in wetlands and urban ponds in the Atlantic Flyway in the northeast US, but there has been a puzzling population level decline of 1 percent annually since 1998. In contrast, in Eastern Canada mallard populations are stable. Determining the drivers behind these different trajectories is the impetus for this project.

Some 273 mallards were already banded and deployed with six of them from Massachusetts.

Black ducks experienced a population decline of 50 percent in the 1950s through 1980s and never recovered. Researchers still haven’t determined the mechanism behind the lack of recovery. Some 150 black ducks were already banded and deployed, of which eight of them were from Massachusetts.

The Massachusetts Department of Agricultural Resources has confirmed that HPAI has been detected in wild birds in multiple locations in the state and appears to be prevalent in at least some species of the wild bird population. (Please note, I am not implying that HPAI is causing the decrease in numbers of the ducks noted above).

According to the MDAR, this means all domestic poultry in Massachusetts may be at risk of exposure to the virus, which can be fatal for birds like chickens and turkeys.

Avian flu, also known as bird flu, is a common influenza strain that can spread from birds to humans through saliva, nasal secretion and feces. The avian flu is not common among humans, but is very contagious among birds.

Earlier this month, the owners of Pumpkin Wall Farm in Derry, New Hampshire, said about 80 of their birds were euthanized by state workers after five turkeys at the animal sanctuary suddenly died of the avian flu. Wild ducks carrying the virus landed in their pond and infected the flock, which meant the rest of the farm’s chickens, ducks, geese and turkeys then had to be put down.

The MDAR said waterbirds including shorebirds and waterfowl, especially dabbling ducks like Mallards, are most likely to carry the HPAI virus.

People who own chickens, turkeys and guinea fowl, and game birds like pheasants, are advised to keep waterbirds away from their domestic birds. Owners of domestic birds are also advised to ensure that good biosecurity is being used to protect the animals, as owners and visitors may accidentally expose their birds to HPAI through contaminated shoes, clothing or equipment.

The MDAR said sick or dead domestic birds — chickens, turkeys, gamebirds, domestic ducks, etc. — should be reported to the department’s Division of Animal Health at 617-626-1795 or through an online reporting form that can be obtained at Mass.gov/forms/poultry-disease-reporting-forms. Sick or dead wild birds should also be reported to the Massachusetts Department of Fish and Game’s Division of Fisheries and Wildlife (MassWildlife) by calling 508-389-6300 or by emailing Mass.Wildlife@mass.gov.

The Division of Fisheries and Wildlife will hold a public hearing on Tuesday, April 19, 2022, at 10 a.m., regarding the 2022-23 Migratory Game Bird Hunting Seasons via a Zoom video webinar with the Hearing Officer, MassWildlife staff, and Board members. The public is invited to join via computer or phone line. Instructions for how to join are listed on the MassWildlife website.

The proposed regulatory amendments are posted on that website so that interested persons can review them and provide written comments prior to the hearing and oral comments during the public-comment portion of the virtual hearing. The DFW Board must vote to approve the 2022-23 migratory bird seasons at the close of the hearing. Therefore, there will be no written comment period after this public hearing.

I have been receiving calls inquiring when the next hunter safety course will be held in the Berkshires. None are listed at this time on the MassWildlife website. The closest class that I could find that wasn’t already filled was at the Worthington Rod & Gun Club, 458 Dingle Road (Rte. 112) in Worthington. It is a 4-day course: April 18, 19, 21 and 22 from 5:30 to 9 p.m. each night. To enroll, call 508-389-7820 and press 0 for an attendant.

After a pandemic delay, the annual Marlborough Fly Fishing Show is set to return this month at the Best Wester Royal Plaza Hotel & Trade Center in Marlborough, Mass.

Admission is $15 for one day, $25 for two days and $35 for all three days. Children under five and any Boys and Girls Scouts members under 16 and in uniform are free. Otherwise, children 6-12 are $5. Active military with an ID are $10.

More information is available at Flyfishingshow.com/marlborough-ma or call 814-443-3638.