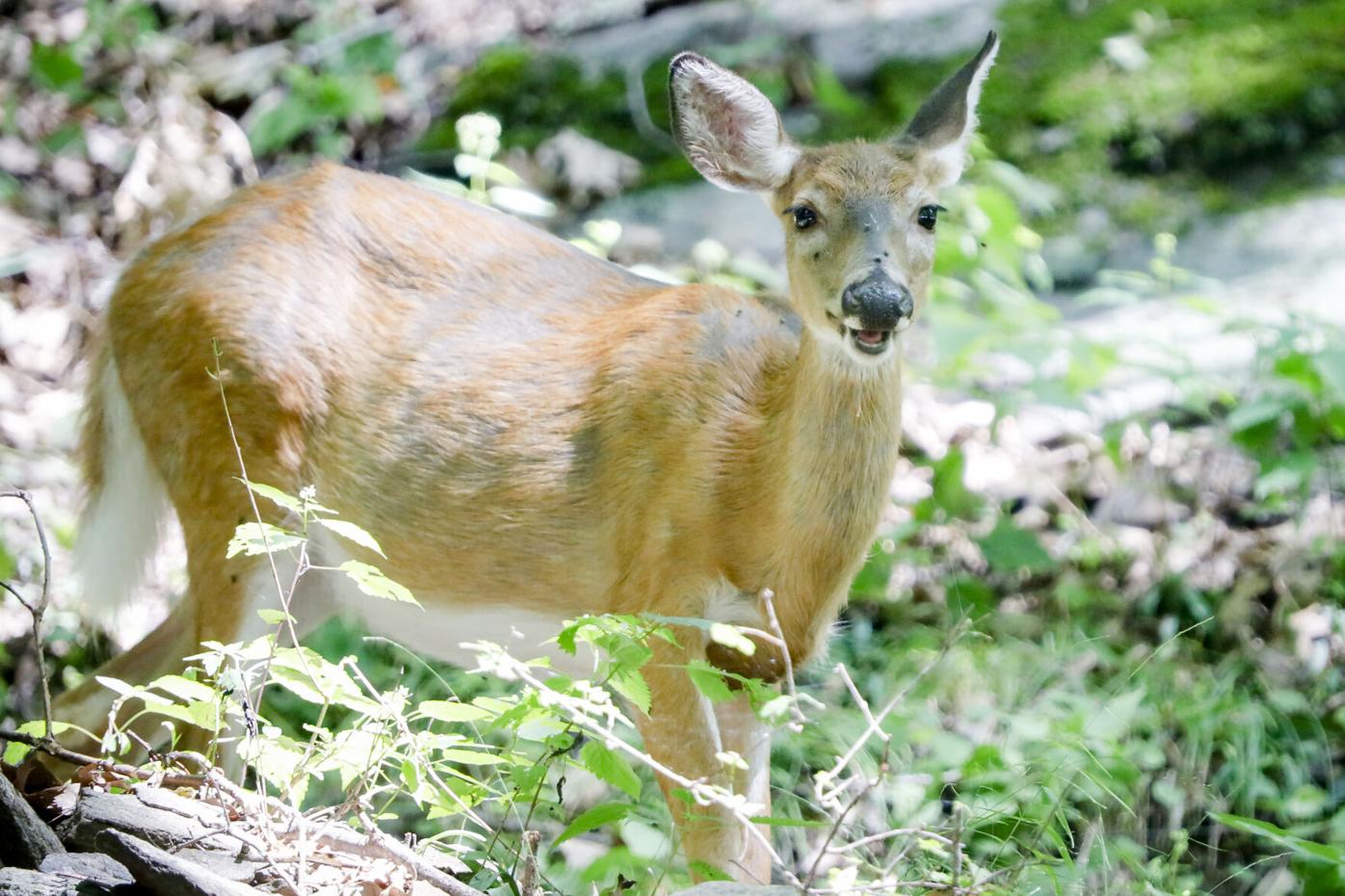 A doe looks up from grazing on a wooded hillside in Ashley Falls. 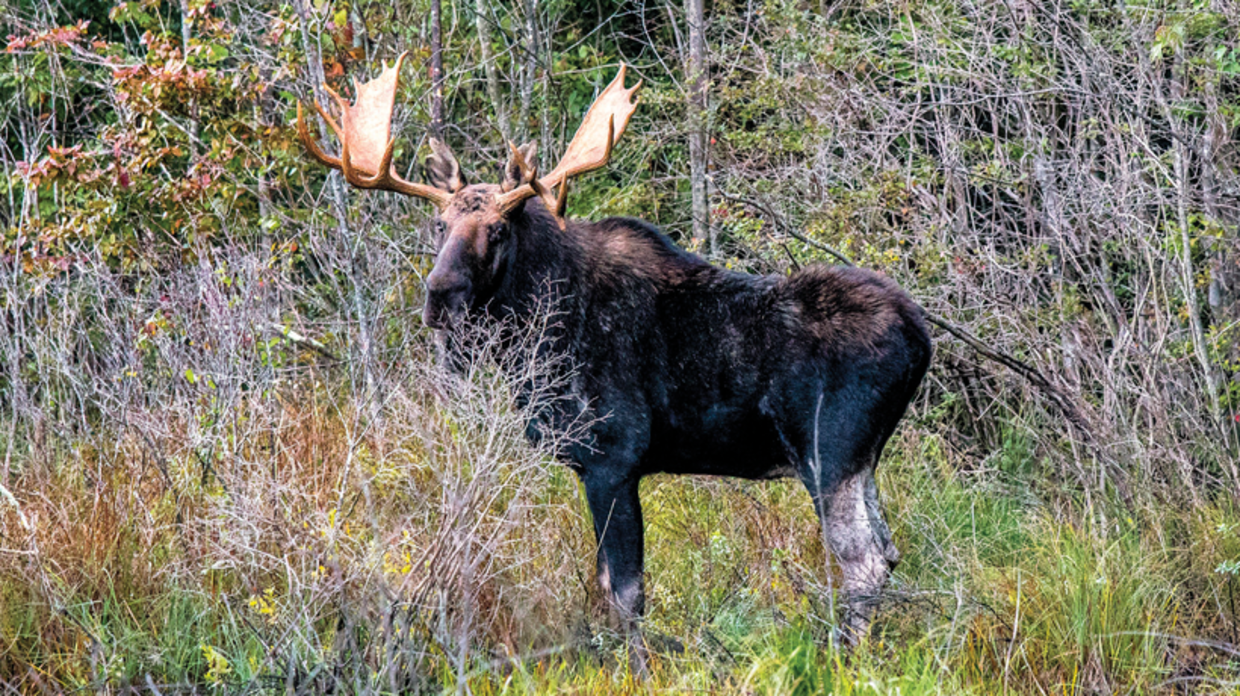 A 700-pound bull moose was spotted recently in downtown Worcester.

Today, I’m not writing about Chronic Wasting Disease (CWD), a contagious neurological disease that is fatal to cervids, including deer, elk and moose. It attacks the brains of infected animals, causing them to exhibit abnormal behavior, become emaciated, and eventually die. Infected deer may spread the infectious agents through urine, feces, saliva, etc. for months before showing any clinical symptoms.

Fortunately, no CWD-infected deer have been found in Massachusetts yet, probably due to certain restrictions regarding the movement of deer and deer parts that have been put in place. For example, if you hunt deer outside of Massachusetts, it is illegal to import deer parts from states or Canadian provinces where CWD has been detected. So far, it has been detected in 26 states (as close as New York and Pennsylvania) and four Canadian provinces. It is legal to import deboned meat, clean skull caps, hides without the head, or a fixed taxidermy mount.

There is a whole section on the MassWildlife web site which addresses this disease.

No, today I am writing about another disease: Epizootic Hemorrhagic Disease (EHD).

Recently, the New York Department of Environmental Conservation (DEC) has confirmed a large outbreak of EHD in its whitetail deer population, with reports of approximately 700 dead whitetails. The EHD outbreak has been confirmed in seven N.Y. counties, some of them not too far away from Berkshire County, such as Columbia County, Dutchess, Greene and Ulster counties. Wildlife officials are now also investigating suspected EHD cases in at least nine more counties, including Albany and Rensselaer Counties.

According to wildlife officials, EHD is not spread from deer to deer, but is transmitted by biting midges, sometimes referred to as “no-see-ums.” They also believe that humans cannot be infected with EHD by deer or by bites from midges. This is a terrible disease affecting deer because once infected with it, they usually die within 36 hours. They have no immunity to the virus. Officials believe that EHD outbreaks are most common in the late summer and early fall when midges are abundant, although initial cases this year in New York were detected in late July. The DEC reports that the virus has been more widespread this year than during previous outbreaks.

The DEC reports that EHD does not have much long-term impact on whitetail populations, but deer mortality can be significant in small regions. It is endemic in the southern states, which report annual outbreaks, so some southern deer have developed immunity.

According to the DEC, the virus was first confirmed in New York deer in 2007 in Albany, Rensselaer and Niagara counties. Another EHD outbreak in Rockland County occurred in 2011. In 2020, a large EHD outbreak occurred in the lower Hudson Valley, centered in Putnam and Orange counties, with an estimated 1,500 deer deaths.

The DEC is asking all New Yorkers to report sick or dead deer to the DEC. Signs of EHD virus in deer include fever, hemorrhage in muscles or organs, and swelling of the head, neck, tongue and lips. A deer infected with EHD may appear lame or dehydrated, and EHD-infected deer often go to water sources and die nearby. Dead deer are not a source of EHD infection for other deer, animals or humans.

Hemorrhagic disease can cause very high mortality rates and is considered the most important viral disease of white-tailed deer in the United States. There is currently no treatment for hemorrhagic disease in wildlife populations. And, while characterized as infrequent in the North, outbreaks that do occur are known to be severe and capable of high mortality.

EHD is transmitted by biting flies or midges in the group called Culicoides. The midges are found near mud, which is their preferred breeding habitat. Outbreaks usually occur when deer congregate in wet areas at the driest part of late summer and early fall — when seasonal midge activity is also at its peak. They end when the first hard frosts take their toll on the midges and the virus dies with the insects.

Martin Feehan, Deer & Moose Biologist from Massachusetts Division of Fisheries & Wildlife (DFW) recently addressed this subject: “MassWildlife conducts routine surveillance for diseases that could spread to wildlife in Massachusetts, and we work with our regional partners to ensure we are aware of any outbreaks. Our surveillance efforts include passive monitoring for EHD, however, there has never been a case within the state.”

“We have been in regular communication this summer with our counterparts at the New York DEC about the 2021 EHD outbreak. The outbreak in New York is more extensive than they have had in the past and includes counties adjacent to Massachusetts. It is unlikely that we will have cases at this point in the fall as temperatures continue to drop, however, there is an increasing probability of EHD cases occurring in future years. The distribution of EHD outbreaks has moved northward as summer temperatures have increased due to climate change. We encourage community members and in particular hunters to report deer to regional DFW offices that appear symptomatic. (As noted above) the most common signs are swelling of the face or neck, weakness, respiratory distress, fever and excessive salivation. Infected deer will often be found near water sources. EHD cannot be spread to humans and does not cause population level effects for deer, but occasionally will have localized impacts around severe outbreaks.”

This time of year, bow hunters are out scouting potential areas in which to hunt and hikers are taking advantage of the cooler weather to traipse the trails and view the lovely fall foliage. As Martin wrote, if you see signs of sick or dead deer that are suspected of having EHD or CRD, report them to your Regional DFW office.

To date, there is no evidence that humans can contract the disease by consuming venison that has been infected with EHD or CRD.

Next Friday, Oct. 1, the Woodcock (a/k/a Timberdoodle) Hunting season opens and runs through Nov. 22. Waterfowl stamps are not required for hunting woodcock nor is the use of non-toxic shot. You must register with the Harvest Information Program (HIP). The daily limit is three and the possession limit is nine. Shotguns capable of holding more than three shells may not be used unless plugged with a one-piece fill which limits the gun’s total capacity to three shells and which cannot be removed without disassembling the gun. Remember, a reasonable effort is required to retrieve all migratory birds killed or crippled.

Watch out for moose

MassWildlife urges drivers to use caution because it’s mating season for moose. During September and October, moose become more active and cross roads more frequently. They will step out onto a roadway without showing concern for oncoming traffic. At night, their dark body is difficult to see, and their eyes are much higher and generally not reflected back from headlights. Due to their weight and leg length, the body will often come through the windshield and onto the driver, making collisions extremely dangerous.

Don’t just expect to see them in remote areas. Last year a moose was spotted in a back yard of a residence located on Elm Street in Pittsfield. Recently, a 700-pound bull moose was wandering in traffic through downtown Worcester. After receiving reports that the moose was involved in a minor car accident, the Massachusetts Environmental Police successfully immobilized him. DFW staff relocated the moose to a nearby forested area and monitored him until the effects of the immobilizing drugs wore off. While moose sightings aren’t usually cause for alarm, that moose was near busy roadways, and was moved for both the safety of the public and the moose.

Also, don’t forget, whitetail deer get romantically involved, too, which usually occurs from late October to early December. Please watch out for them, too, as they can also do serious damage to your automobile if you hit one.