As most outdoor sportsmen and women are aware, MassWildlife is proposing changes to hunting, freshwater fishing and trapping license fees. The existing fee schedule has been in effect for the last 25 years and it is no secret that fees must increase or MassWildlife will go broke in a few years.

A little over a week ago, MassWildlife released a new license fee proposal, which incorporates public input on the original February proposal. In the new proposal, most license fee increases will be phased in over five years, and the proposed increases for hunting permits and stamps are lower than originally proposed. 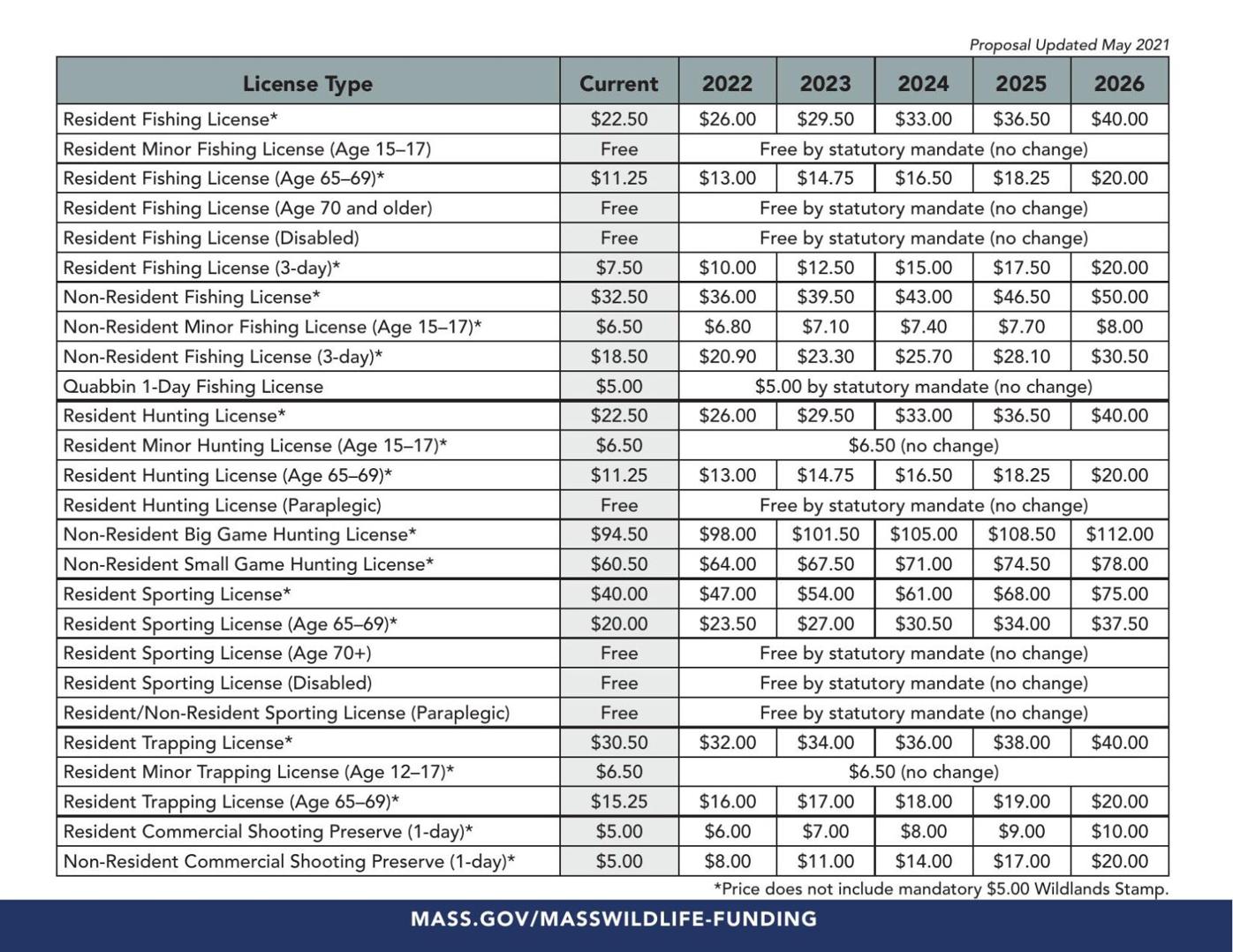 The current proposal incorporates public feedback gathered through six information sessions held in February and March, as well as phone calls, emails, letters, and a webform. Although many folks expressed an understanding of the need to raise fees, there was a strong desire to see the proposed increases for license fees phased in over time, and to lower the proposed increases for the costs of hunting permits and stamps. In response, MassWildlife and the Department of Fish and Game worked with the Baker-Polito Administration to revise the original fee proposal.

Recognizing that all Massachusetts residents benefit from MassWildlife’s work to conserve wildlife, protect open space, and preserve clean water and air, the Baker-Polito Administration will work to diversify MassWildlife’s funding and reduce the burden on the fee-paying sporting community. This change will make it possible to maintain MassWildlife’s programming and services with lower fees than originally proposed.

Public hearings will be held on June 22, 23 and 24 on Zoom to provide the public an opportunity to comment on the new proposed changes. Stakeholders can provide public comment by speaking at one of the hearings or providing written comment through July 8 using a convenient feedback form available on the MassWildlife web site or by mail to: MassWildlife Re: License Fee, 1 Rabbit Hill Road, Westborough, MA 01581.

Phasing in the license fee increases over a five-year period certainly makes the change more palatable than the original proposal. You may recall that the original proposal for the permits and stamps were to jump immediately from $5 to $20. With this new proposal, the fee increase would only be $10, at least for the next five years. Instead of an immediate drastic $20 pheasant permit fee, it would start at $4 in 2022 and would gradually increase to $20 in year 2026.

The Massachusetts Conservation Alliance, a group comprised of the various county leagues of sportsmen and other sportsmen’s clubs from across the state really did a yeoman’s job in unifying 100,000 or so sports folks to put pressure on MassWildlife to come up with a more realistic schedule of fee increases. Co-chaired by Joe Alfonso and Paul Johnson, they actually came up with their own recommended fee schedule which MassWildlife seriously considered before making its final recommendations. (Outdoor sportswriter David Willette of North Adams has an excellent article about the MCA in the June, 2021 issue of the Northwoods Sporting Journal.) Massachusetts outdoorsmen and women will be hearing more about the MCA in the future as more and more clubs and leagues join it’s ranks in order to have a little more political clout on Beacon Hill.

It is especially gratifying to hear that the Baker-Polito Administration will work to diversify funding in some way. Hopefully, they can do something about funding the free licenses for 70-plus older folks. Sen. Anne Gobi (D-Spencer), co-chair of the Massachusetts Legislative Sportsmen’s Caucus and past chair of the Joint Committee on Environment, Natural Resources, and Agriculture, has filed a bill in the 192nd session of the General Court aimed at addressing lost revenue that the state is failing to reimburse to MassWildlife. An Act to Reimburse the Inland Fisheries and Game Fund (SD. 1453) would target the more than $1 million per year the agency forfeits each year by providing free hunting and fishing licenses to residents aged over 70 that is not currently being reimbursed by the state. You may want to call your local legislators and ask them to support this legislation.

Deb Lipa, MassWildlife Western District Clerk, said that she believes they finished the stocking trips last week, but couldn’t verify that. She suggested that anglers keep checking the stocking report online to see if there are any further deliveries next week.

Deb does a lot of extra work for us to ensure that this column has the latest stocking reports. Many, many thanks Deb!

Don’t forget, next weekend is free fishing weekend in Massachusetts, so round up the family, get out there and catch a few of these trout.

Leigh H. Perkins, who transformed Orvis from a niche fishing tackle business into a global sporting emporium and lifestyle brand, selling everything from graphite fly rods and Gore-Tex rainwear to linen dresses and engraved drinking glasses, died May 7 at his home in Monticello, Fla. He was 93. He bought Orvis in 1965 for $400,000, taking over a company that C.F. Orvis had founded in Manchester, Vt. in 1856. By the time Leigh retired as president and CEO in 1992, Orvis had grown from 20 employees to more than 700, and from annual sales of $500,000 to more than $90 million. The company currently operates more than 80 retail stores in the United States and Britain, with sales driven by online shopping and catalogues that Leigh sent to millions of homes each year. After his retirement, his son Leigh H. “Perk” Perkins Jr. became CEO, with his younger son David helping run the company. Now, his grandson Simon Perkins leads the company.

Leigh Sr. started a fly-fishing school and a wing-shooting program. The classes were among the first of their kind in the United States, offering formal training in activities that were often considered upper crust.

He was also one of the first executives to start dedicating corporate earnings to conservation, donating 5 percent of pretax profits to conservation organizations beginning in the 1980s. He wanted to protect these places to be able to connect and share with others, but he also saw it as good business — investing in the landscape and the habitat.

An online tribute published on the company’s website said Perkins was a lifelong outdoorsman who hunted or fished more than 250 days a year into his 90s, and who had a reverence for nature and conservation.

He certainly left a wonderful legacy.

The above information was gleaned from Leigh’s obituary, written by Brian Gallagher, Senior Staff Editor at The New York Times.

In last week’s column, I erroneously listed the name of an angler whose picture was shown holding a 10-pound brown trout. I listed him as being Mark Lucier when, in fact, his name is Mark Markham. My apologies! This is especially embarrassing to me as Mark is a close personal friend with whom I have deer hunted and/or ice fished for several years. He is a superb deer hunter and many times our ice fishing group has enjoyed his grilled venison meals while out on the ice.

It’s that time again when we honor those who have fought, suffered and/or and died in defense of our country. Let’s hope that as a nation we can set aside our differences and come together this weekend to remember them and their sacrifices. They deserve nothing less.