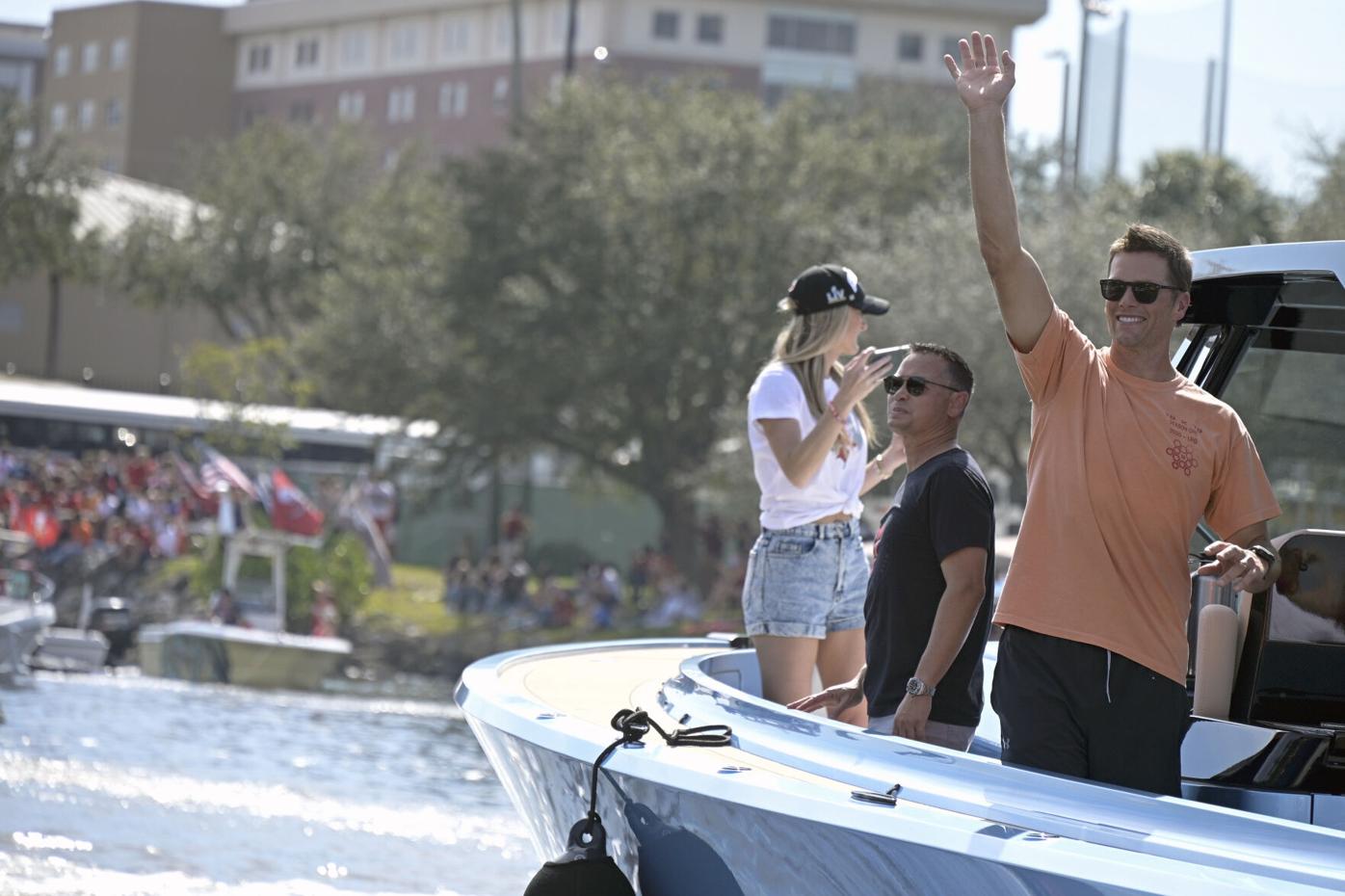 Tampa Bay Buccaneers NFL football quarterback Tom Brady waves to fans as he celebrates their Super Bowl 55 victory over the Kansas City Chiefs with a boat parade in Tampa, Fla., in this Wednesday, Feb. 10, 2021, file photo. Viewership in the Boston market topped that of the Tampa, Fla. market for last season's Super Bowl, and New England fans continue to tune in for Brady's games in droves through the first two weeks of this season. But who will Patriot Nation root for Sunday night? 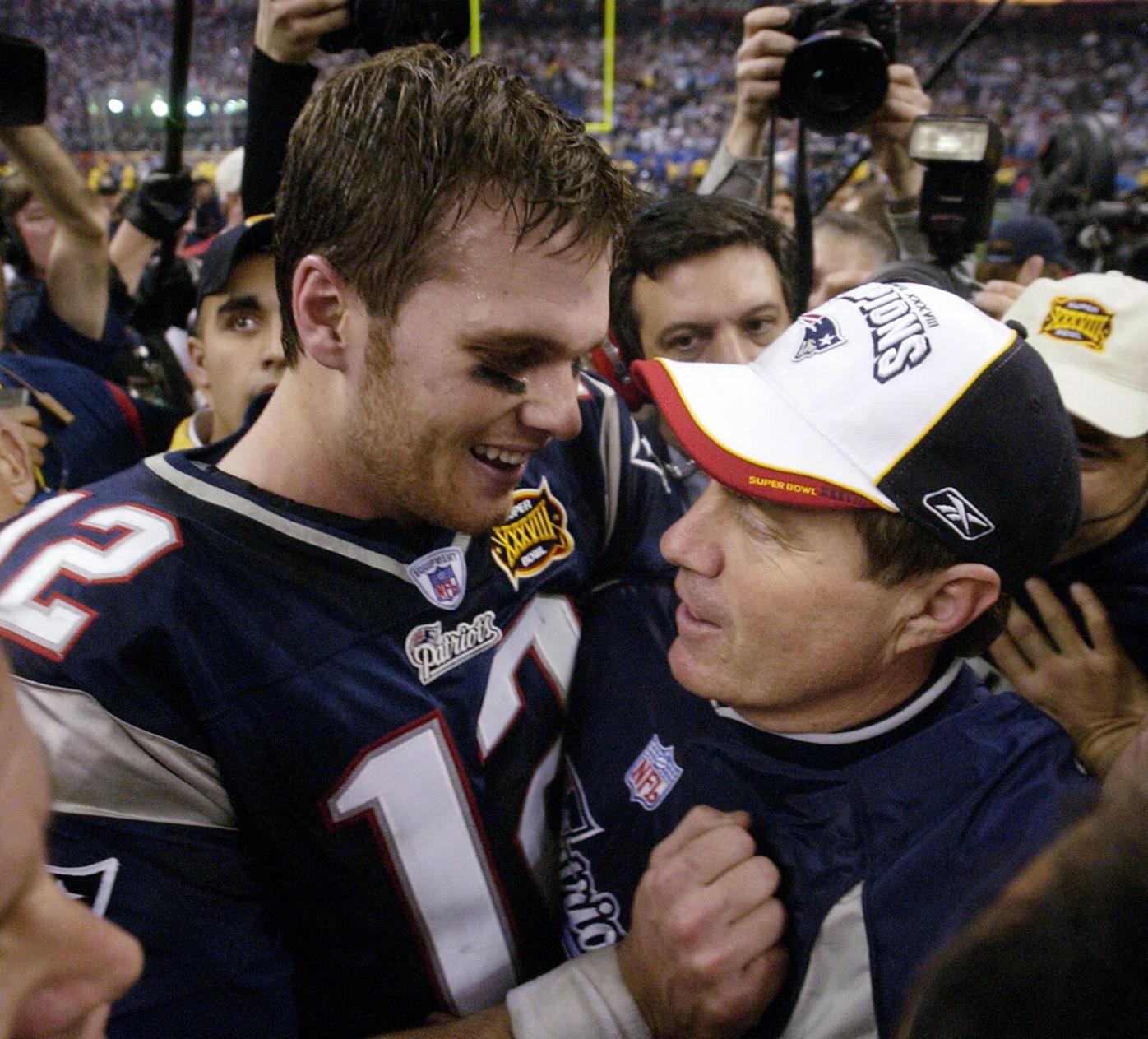 Once upon a time, Tom Brady and Bill Belichick were virtually unseparable, as in this Feb. 1, 2004 file photo after the Patriots  beat the Carolina Panthers 32-29 in Super Bowl XXXVIII in Houston. Belichick became Patriots head coach in 2000 and drafted a skinny quarterback from Michigan with the 199th pick. The following season, the pair begin their run as the greatest quarterback-coach duo in NFL history by winning the first of their half dozen Super Bowls together. Now, they'll be on opposite sides Sunday night.

There have been a lot of homecoming parties in sports. We’ve seen Johnny Damon and Roger Clemens return to Fenway Park as members of the New York Yankees. We’ve seen Paul Pierce return to TD Garden as a Brooklyn Net. We’ve seen Big Z, Zdeno Chara skate into the Garden as a teammate of Alex Ovechkin’s.

But never have we gone to Defcon 5 level over a homecoming party — until this weekend.

There's nobody with more emotional credit in the Boston bank than Brady. He's been the topic of maybe 25 percent of conversations with my father over the last 20 years. My extended family built out annual get-togethers to coincide with playoff games. The rule was, if you're going to talk about anything not relating to Tom Brady or the game, do so outside of the TV room.

This year’s NFL “Game of the Century,” will be played at Gillette Stadium Sunday night. The New England Patriots will be hosting the Super Bowl champion Tampa Bay Bucs. That’s right, the Fightin’ Belichicks will take on the Tom Bradys in a battle for, if nothing else, bragging rights.

Most of those other homecomings were pretty easy to determine heroes and villains. No Red Sox fan would root for the Yankees, while the Capitals were a threat to the Bruins making the Stanley Cup Playoffs and of course, Pierce was part of that “fleecing” of the Nets by Danny Ainge.

But when it came to Brady and the Bucs, it was far easier for Patriots Nation to not only accept his move, but openly root for him. After all, the Bucs weren’t a threat and in fact, play in the NFC.

So, while this is just one of 17 regular-season games that has some bearing on who is going to make the postseason, it’s the first time those Patriot fans who liked to split the difference might have to make a choice.

Bobby Maimaron, like Brady, plays quarterback. The Williams College senior grew up in Duxbury and watched TB12 every weekend.

“Any other weekend, I’m a pretty big Tom Brady guy,” Maimaron told me. “This weekend, I’m definitely a Patriots guy.”

“I think it would be great for the Patriots, and especially for Bill Belichick, to kind of get one over on Tom,” Maimaron said with a chuckle. “Because, I think Tom’s had a pretty good last 12 months. It would be nice to see some Patriots success for the first time in a while.”

Lee High School graduate Lukas Loehr, an assistant under head football coach Keith Thomson, also grew up in rooting for Brady and the Patriots. He also rooted for Brady last year. But on Sunday night, no chance.

“I pull for the Patriots,” Loehr said. “New England through and through. I always root for Tom Brady in my heart, but I’m a Patriots man all the way.”

Calling around to various high school coaches in order to talk with their quarterbacks for this column, I discovered there are fewer Brady fans among them than I anticipated. That’s because those high school signal callers, and their names will go unmentioned, root for teams like the Bills and the Giants.

One thing I did discover is that Wahconah coach Gary Campbell Jr. comes down on the Brady side. That’s because Campbell said he’s been a Bucs fan since the days of Ricky Bell.

There are undoubtedly more Patriots fans in Campbell’s orbit than there are Bucs fans. So I asked for his opinion on the hardest thing for Pats fans to handle.

“I don’t think they blame anyone. They’re just upset he’s not a Patriot.”

And then there’s John LeClair. The North Adams native is a member of Mark Raymond’s coaching staff at Williams, and is trying to straddle the line between Brady and the Pats.

“It’s a win-win,” LeClair said. “When you’re a football fan and you respect what Tom Brady did and Gronkowski, and at the same time Belichick, how can you go wrong with this game?

“I guess I just enjoy it as a football fan and have a good time.”

LeClair is a longtime Patriot fan, but he’s a season-ticket holder in Tampa as well. Now, were the teams to meet in a Super Bowl, that would be a whole different kettle of fish to mull over.

“I’ve got to root for the Patriots,” he said. “I wouldn’t be one of those guys, if I was at Foxborough, who was booing Tom Brady. What he gave New England, we can’t ever replace. Was I disappointed he left? Yes, but it was time for him, it was time for coach Belichick.

“Sunday night, I hope it’s a great game. I hope the Patriots win because I don’t want them to go 1-3. It’s going to be a very interesting game.”