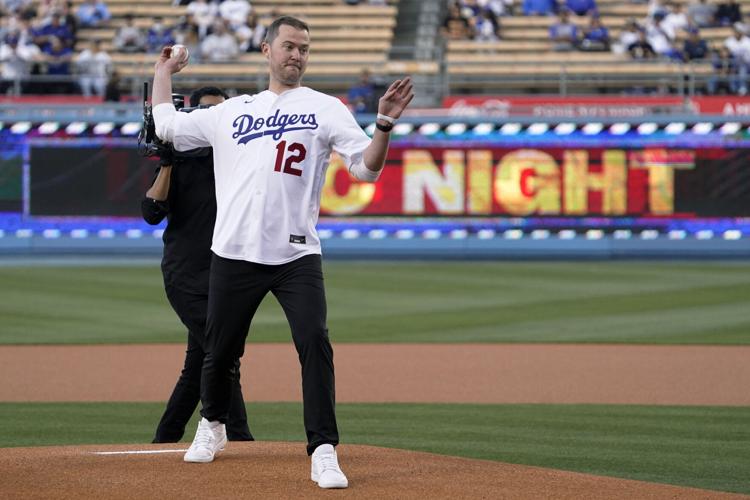 University of Southern California football head coach Lincoln Riley throws out the ceremonial first pitch prior to a baseball game between the Los Angeles Dodgers and the Philadelphia Phillies Friday, May 13. Riley, who came to USC from Oklahoma, will have to make a new pitch to recruits now that the Trojans have joined the Big 10. 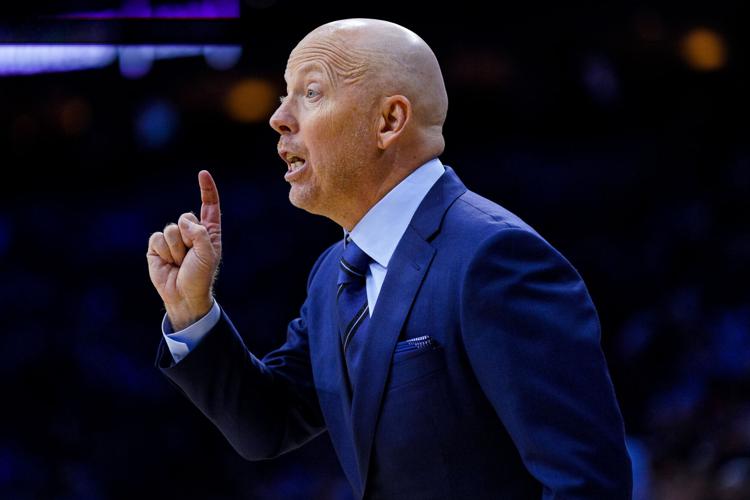 Mick Cronin came to UCLA from Cincinnati. Now the Bruins' basketball coach will be coaching in the Midwest again after UCLA and USC were both approved to join the Big 10.

University of Southern California football head coach Lincoln Riley throws out the ceremonial first pitch prior to a baseball game between the Los Angeles Dodgers and the Philadelphia Phillies Friday, May 13. Riley, who came to USC from Oklahoma, will have to make a new pitch to recruits now that the Trojans have joined the Big 10.

Mick Cronin came to UCLA from Cincinnati. Now the Bruins' basketball coach will be coaching in the Midwest again after UCLA and USC were both approved to join the Big 10.

Another earthquake has rocked the Division I college sports landscape. The aftershocks of the move by USC and UCLA from the Pac-12 to the Big 10 Conference will be felt for a number of years.

“I think it’s more of a forecast of what’s to come,” is what University of Massachusetts athletic director Ryan Bamford said of the move, which was officially announced Thursday at 8:30 p.m.

Within an hour of the unanimous vote, there were published reports that Oregon and Washington had applied for membership in the Big 10. Those applications have not, however, been accepted as of this writing.

“I’ve been telling people, when they’re hammering me about getting into a football conference, that conference re-alignment is far, far from over,” Bamford said to me, when we spoke Thursday, just prior to the Big 10’s unanimous vote on USC and UCLA. “This is just the latest. There is going to be more.”

“In terms of the collegiate athletic space, I can’t tell you I was surprised,” with the USC and UCLA move, the UMass athletic director said. “I think we’re going toward these mega-conferences and at the end of the day, there may only be two or three of 20-plus members in each conference over the next five years. That may be where we’re heading.

“I’m not telling you I knew anything. I didn’t. I wasn’t surprised,” Bamford continued. “What we’ve been comfortable with for so many years went out the window when the ACC conference realignment changed in 2012, and more recently USC, UCLA, Texas and Oklahoma.”

Which leads to the obvious question: Where does this all leave UMass?

The UMass sports programs are, for the most part, in healthy conference situations. The vast majority of the teams play in a healthy Atlantic 10 Conference. The UMass hockey team plays in Hockey East, which is perhaps the strongest Division I college hockey league.

Of America’s Division I-FBS football-playing schools, only UConn switched conferences for basketball when it moved from the AAC back to the Big East. Every other conference move — even back to the decision by Boston College, Pittsburgh, Louisville and Syracuse to bolt to the ACC— have been football-predicated moves.

The ever-active UMass Twitter Nation has often clamored for UMass to join a conference, if not for football alone, then for every sport.

While the landscape is shifting under everyone’s feet seemingly hourly, Bamford said when we spoke that he things for now, “We’re in a great position.”

“Don Brown is going to come in here. He’s going to win football games,” Bamford said. “We’re going to have opportunities to get to bowl games. As an independent, we’re nimble. We can continue to keep our eyes on what we have in front of us and keep our ears to the ground to see how [athletics] is moving around us.

“It’s just going to be who’s where and then, do we get aligned on where do we want to take our football program.”

As of this morning, UMass is one of only four independents, along with Army, UConn and Notre Dame. The Irish do play five ACC games as part of the school’s deal as a member of the conference for its other sports. Two independents, New Mexico State and Liberty, are moving together into Conference USA.

The UMass athletic director said that if there is a short-term concern, one that won’t impact UMass for several years, it could be in scheduling Power-5 teams.

The Minutemen are heading to Texas A&M this November. In 2023, UMass has road games with Penn State and Auburn. In 2024, UMass is scheduled to go to Missouri, Georgia and Mississippi State.

This, however, is where the proverbial rubber might meet the proverbial road. The so-called mega-conferences will have to play more league games. Unless the number of games is increased, that could decrease inventory for teams like UMass.

“The SEC, if they go from eight games to nine, that’s less inventory for them to play non-league games. That means we probably lose out on an SEC game each year,” Bamford said. “We have Texas A&M this coming year. We’ve been to Florida. We’ve been at South Carolina. We’ve been at Vanderbilt. We’ve been at Georgia. We have Auburn coming up. That actually has more significance for us from a scheduling standpoint because that’s $1.6-$2 million in guarantee money that won’t necessarily be available to us any more if they go to nine conference games.”

At some point, there is a possibility that UMass might have to play a hand that puts it into a conference.

“The college football playoffs, it’s going to be about access. if there’s no access for what we know at this moment or what will eventually be the Group of 5 conferences or certain schools that are in that background,” the UMass athletic director said, “I think the model for college football at our level is going to change.”

And I expect that if there is change, it will come rapidly. So stay tuned.