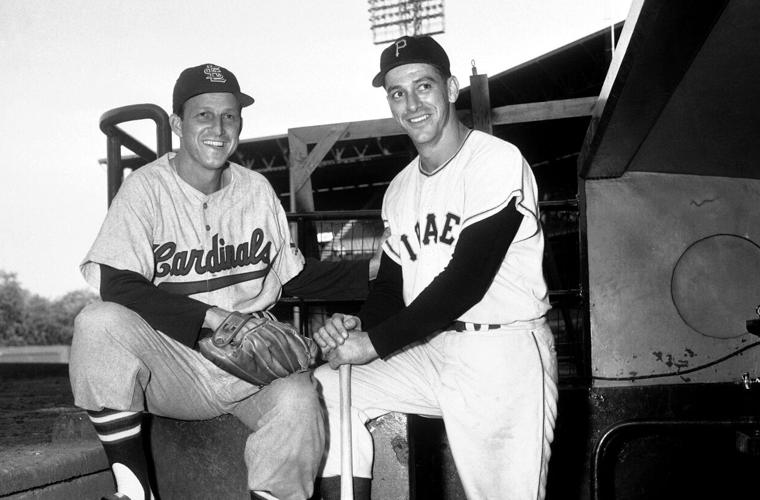 Pittsburgh Pirate, and Adams native Dale Long, chats with St. Louis Cardinals star Stan Musial on May 23, 1956 in Pittsburgh before a game which the Pirates won 6-0. Long who at that time was leading the league with a batting average of .409 and 32 RBI was also tied with St. Louis’ Ken Boyer for the most home runs. Both had 11. 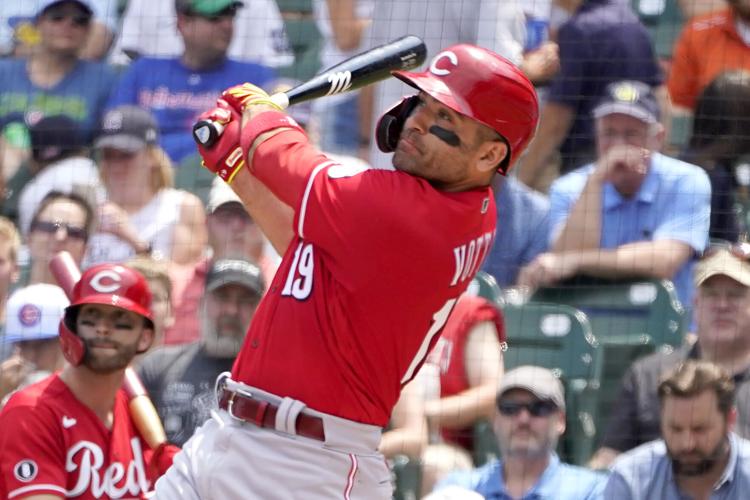 Cincinnati Reds’ Joey Votto hits a two-run home run off Chicago Cubs starting pitcher Alec Mills during the first inning of a game on July 29. It was one of seven homers in seven consecutive days for the Reds’ slugger. He missed out on eight in eight days, which would have tied him with Dale Long of Adams.

Joey Votto missed out on a chance at baseball immortality last Saturday night. It’s an immortality that we in Berkshire County can claim a piece of.

When Votto’s 10th-inning drive hit the top of the wall at Citi Field in New York and bounced back onto the field of play, it ended his streak of seven home runs in seven consecutive days. It means that Dale Long of Adams is still in the rarified company with Ken Griffey Jr. and Don Mattingly as the only three Major League Baseball players to accomplish that feat. Long was, however, the first when he did it in 1956.

That got me thinking about Long’s record, and the fact that a few years ago, young baseball players at the successor to Adams High School did not know about it.

“That’s kind of amazing to think somebody who comes from that little town can get into the Hall of Fame like that,” J.P. Levesque, who played for Hoosac Valley, the successor school to Adams High said to me. “I really didn’t know about him. But now that they’ve told us, I’m glad I know.”

Levesque was speaking back in May of 2015, when Hoosac, Pittsfield, Taconic and Wahconah all went to Cooperstown, N.Y. to play baseball at historic Doubleday Field. The day also included a tour of the Baseball Hall of Fame, which is why I asked a group of Hoosac players if they had known about Long.

When Long was with the Pittsburgh Pirates in 1956, he hit home runs on eight consecutive days. A display in the Hall of Fame had bats from all three players to do it. Had Votto’s shot off of reliever Sean Doolittle cleared the wall, the Cincinnati Reds would have beaten the New York Mets and Votto’s bat would have joined the display along with the lumber of Long, Mattingly and Griffey Jr.

“Good swing,” Votto said to reporters after the game. “I had a great time during this stretch because we played so well as a unit.”

The Citi Field scoreboard operators had some fun with Votto. When he came up in the fourth inning of Saturday’s game, the scoreboard noted he was vying to join that trio, adding “No pressure, Joey.”

The good thing for the Mets is that starter Rich Hill, of the Milton, Massachusetts Hills, retired Votto three times in the game.

Long didn’t just homer off of pitches from just anyone. Included in the “gotcha” list is Hall of Famer Warren Spahn, along with Brooklyn Dodgers star Carl Erskine, Curt Simmons of the Phillies and Lindy McDaniel of the St. Louis Cardinals.

Long’s streak started on May 19 with a home run at Forbes Field against Cubs reliever Jim Davis. While it started a hot streak, it also ended a two-week streak without a home run.

Philadelphia reliever Ben Flowers threw Long a fastball on his last at-bat in a May 26 game. The ball did not knuckle and Long cleared the wall in right field for a home run, No. 7. Trust me when I tell you this, it was a poke to hit it there at Connie Mack Stadium. I wasn’t there then, but I spent a number of nights at Connie Mack in my freshman year of college.

Back in Pittsburgh, the left-handed hitting slugger hit his eighth in eight days off of Erskine. The streak stopped on Tuesday, May 29, as Don Newcombe held Long homerless. Newcombe, by the way, won the National League’s Most Valuable Player and Cy Young Awards in 1956, making him as tough as anyone Dale Long faced all year.

Long started his career in Pittsburgh, playing there twice. He also had stops in St. Louis with the American League Browns (now the Baltimore Orioles), with San Francisco, with the Washington Senators and two tours of duty with the Yankees.

Dale Long died in 1991 and is buried in Cheshire Cemetery.

In a story my late colleague Derek Gentile wrote, he mentioned that Long was a three-sport athlete at Adams High School. He played center on the basketball team that won the 1945 state title.

Pittsburgh Pirates rookie Rodolfo Castro made some history like Long did, when the rookie’s first six big league hits this season were all home runs. They weren’t consecutive hits and didn’t come in consecutive games. But that’s pretty impressive.

Not nearly, however, as impressive as what Dale Long did in 1956.

And J.P. Levesque was right when he said “That’s kind of amazing.”