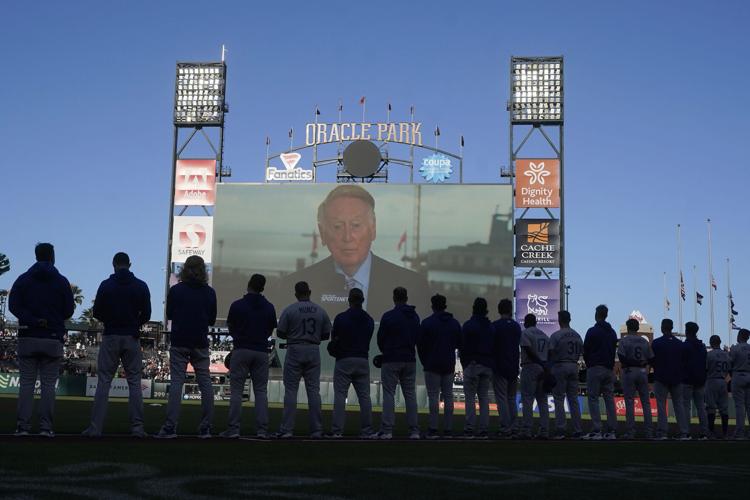 A tribute to broadcaster Vin Scully is shown on a video board at Oracle Park above Los Angeles Dodgers players and coaches before a baseball game between the San Francisco Giants and the Dodgers in San Francisco, Wednesday, Aug. 3. 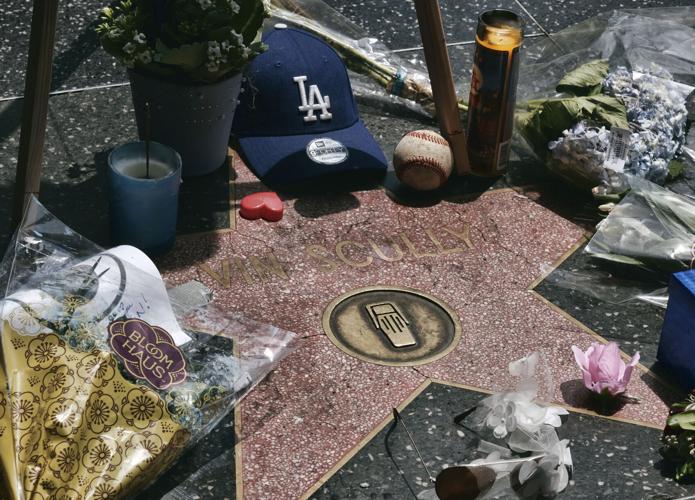 Baseball memorabilia is left at the star of Los Angeles Dodgers broadcaster Vin Scully along the Hollywood Walk of Fame in the Hollywood section of Los Angeles on Wednesday, Aug. 3. The Hall of Fame broadcaster, whose dulcet tones provided the soundtrack of summer while entertaining and informing Dodgers fans in Brooklyn and Los Angeles for 67 years, died Tuesday night. He was 94.

A tribute to broadcaster Vin Scully is shown on a video board at Oracle Park above Los Angeles Dodgers players and coaches before a baseball game between the San Francisco Giants and the Dodgers in San Francisco, Wednesday, Aug. 3.

Baseball memorabilia is left at the star of Los Angeles Dodgers broadcaster Vin Scully along the Hollywood Walk of Fame in the Hollywood section of Los Angeles on Wednesday, Aug. 3. The Hall of Fame broadcaster, whose dulcet tones provided the soundtrack of summer while entertaining and informing Dodgers fans in Brooklyn and Los Angeles for 67 years, died Tuesday night. He was 94.

There was truly nobody better than Vin Scully when it came to play-by-play broadcasting.

In the days since his passing on Aug. 2, if you look on social media of one platform or another, classic Scully calls will come up. From the Sandy Koufax perfect game to Kirk Gibson’s World Series home run.

But for folks of a certain age, Vin Scully is also the voice of a sports nightmare unlike any other.

“In ‘86, I was actually doing the Red Sox pregame show on NESN. I wasn’t there because once you got to the postseason, it was all national TV,” ESPN broadcaster Sean McDonough said. “As a matter of fact, I was at a buddy of mine’s house in Hingham watching it when it happened.”

The it is, of course, the Bill Buckner error that allowed Ray Knight to score and give the New York Mets that Game 6 win in the World Series over the Red Sox.

Ironically, McDonough is the voice of my worst sports memory, when Pirates left fielder Barry Bonds couldn’t throw out Atlanta’s Sid Bream at home in the 1992 National League Championship Series. It is something McDonough and I have laughed about over the years. But there was no laughing on that October night, like there was no laughing when Buckner misplayed the grounder off the bat of Mookie Wilson.

“It was one of those events you remember where you were when it happened. Typical of Vin, it was a great call,” McDonough said when I reached him in California. “It’s still painful to hear it played back because of what transpired within the call. Of the worst sports moments of my life, that would probably be No. 1 on the list.”

Scully spent 67 years as the voice of the Dodgers, both in Brooklyn and Los Angeles. He also worked seven years for CBS, from 1975-82, calling football, golf and tennis. His is the voice of “The Catch,” when Joe Montana hit Dwight Clark for a six-yard touchdown pass with 51 seconds left in the 1981 NFC championship game between San Francisco and Dallas, a game won by the 49ers.

Vin Scully's call of "The Catch" was legendary ❤️

He also spent six years as the voice of baseball for NBC, which is why he called the Buckner gaffe and the Gibson heroics in separate World Series. He is in the Baseball Hall of Fame, having won the Ford Frick Award in 1982. He also received the Presidential Medal of Freedom from President Barack Obama in 2016.

Tim Neverett is part of a group of broadcasters who handle Dodgers games on local television and radio. Many of you might remember him as Joe Castiglione’s partner with Red Sox radio from 2016-18. He moved to L.A. for the 2019 season. Neverett also spent those three years handling some UMass basketball television work on NESN.

Not only does Neverett get to broadcast Dodgers games, but he does so from the Vin Scully Press Box.

There will never be another Vin Scully. You will be forever missed. 🎙💙 pic.twitter.com/WyTmXsati5

The night Scully’s passing was announced, Neverett said he was in the visiting booth at Oracle Park in San Francisco, when word got to the booth.

“We were midway through the game. I was working with Rick Monday. I was on radio and I was on TV two nights ago,” Neverett said, when I reached him in San Francisco. “In the visiting TV booth in San Francisco, there’s a plaque commemorating Vin Scully’s final game he broadcast, which happened to be in San Francisco. That was sitting to my left the whole time. Two nights ago because I knew something was up, I looked at it a little harder. Humbled isn’t the right word, to be able to sit in that same viewpoint he had when he was there.

“As soon as we got the word, the game really became secondary at that point.”

Neverett, who came to Boston from Pittsburgh, said he probably saw Scully more often when he worked for the Pirates and before that the Colorado Rockies, than he did with the Dodgers. Neverett says the onset of the COVID-19 pandemic and it’s aftermath kept Scully, who was 94 when he died, away from Chavez Ravine.

“Last year, I was driving back from Las Vegas to Los Angeles and I was on the phone with my wife as I’m driving. I get a call on call waiting. It was a Los Angeles number. I said to her, it’s somebody in L.A., I’ll just call them back as soon as we hang up,” Neverett said. “As soon as we hung up, I played the voice mail. The first word was ‘Hi.’ As soon as he said that, I knew exactly who it was and I went no way. I can’t believe I didn’t pick up a call from Vin Scully. He left me the nicest voice mail ever.

Scully’s skills on the radio and television were well-known. Both Neverett and McDonough, along with folks who were quoted in many other tributes, said the Dodgers legend was as good of a person as he was a broadcaster.

“I met him a few times. I did some games at Dodger Stadium when I was at CBS and ESPN. I heard Jon Sciambi on SportsCenter talking about his experience. I think everybody in our business would have the exact same stories,” McDonough said, on his way to a V Foundation event in Napa. “He was incredibly warm and friendly and gracious. He wanted to know how you were doing. He wanted to talk about you. You’re there talking to Vin Scully.

“In our business, as jaded as a lot of us are — I like to think I’m not, but there are certainly people who are — he was just one of those people when you were in his company, you felt like royalty or a rock star or something.”

The Dodgers’ Neverett said he often felt the same way.

“He wanted to be your friend and he was everybody’s friend.”

“You and I have been friends for a long time, but I know, in my heart, I’ve always needed you more than you’ve ever needed me, and I’ll miss our time together more than I can say. But, you know what, there will be a new day, and, eventually, a new year, and when the upcoming winter gives way to spring, ooh, rest assured, once again, it will be time for Dodger baseball,” he said. “So, this is Vin Scully wishing you a pleasant good afternoon, wherever you may be.”

May his memory be a blessing.