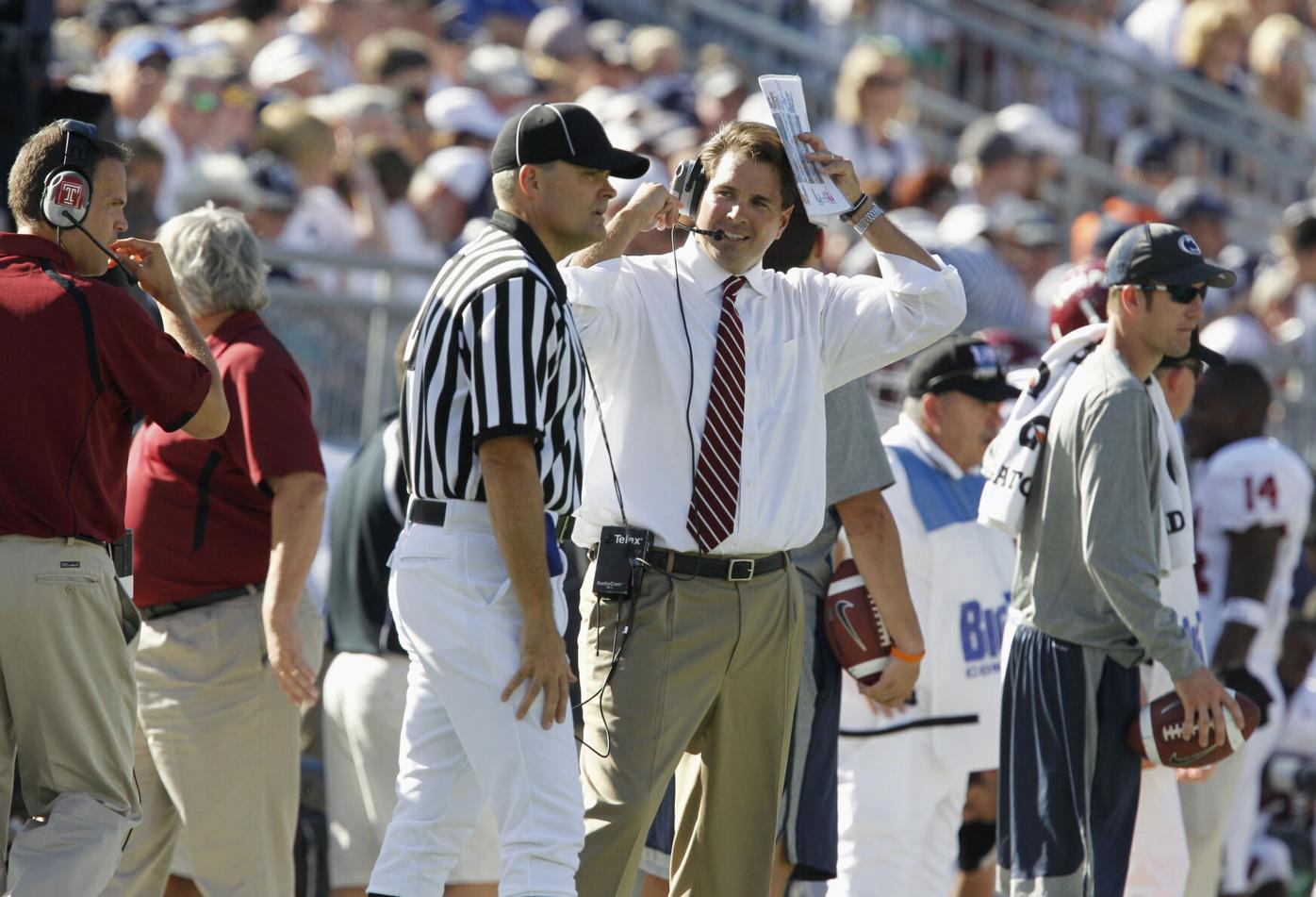 Former Temple coach Al Golden walks the sidelines in 2010. Now an assistant for the Cincinnati Bengals, Golden could be a candidate to replace Walt Bell at UMass. 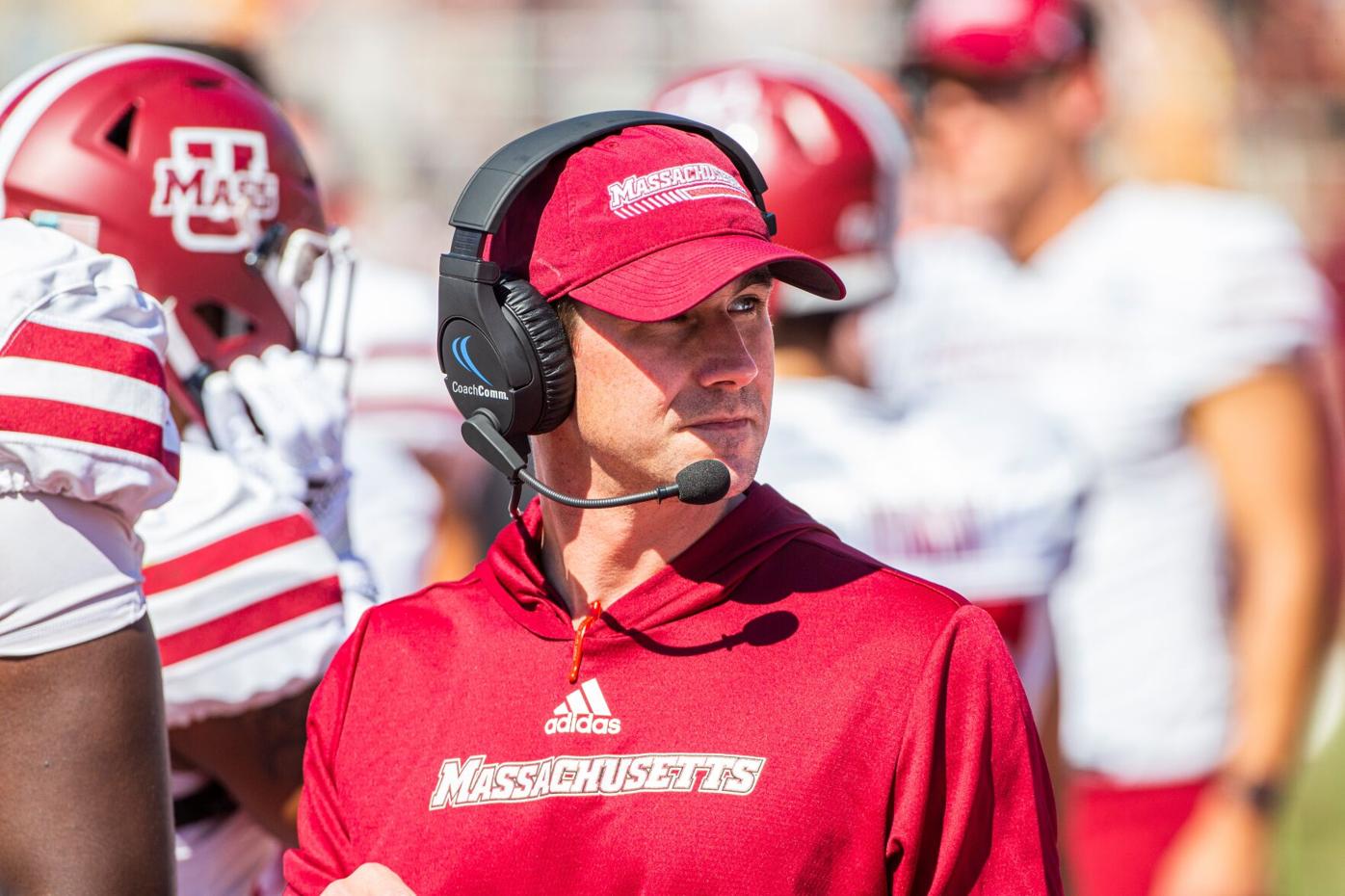 Walt Bell is out of a job because his former boss did not think the University of Massachusetts football team had really turned the corner.

"Ultimately, I think we just haven't turned it in the way that I felt we should have," UMass athletic director Ryan Bamford said. "When we had injuries, there's some depth concerns there. There's some talent development, there's some coaching concerns. I think that, at the end of the day, in order to put us in a better position to have success moving forward, I just felt like a new voice, a new talent evaluator, talent developer was needed. As much as I appreciate, and Walt did a number of things we asked him to do, we've got to develop, we've got to be competitive and we've got to win games. Unfortunately, we weren't competitive in a number of games this year. Obviously, some of the games I felt we had a good chance to win, we weren't able convert those into wins.

"In Year 3, you want to see that progress. It didn't necessarily mean it had to be all wins, but it had to be marked progress and I didn't feel like we were meeting that objective."

That, in a nutshell, is why UMass has Alex Miller as its interim football coach for the final three games of what could have been described as a star-crossed 2021.

Bell was fired on Sunday after two-plus years and only two victories in that time. The 1-8 Minutemen will play their home finale against Division I-FCS Maine, and then travel to Army and New Mexico State the following two weeks to wrap up the campaign.

It was a loss to another FCS team, Rhode Island, that brought the curtain down on the Walt Bell era.

When he was hired back in 2018, he was asked about what would constitute success at UMass.

"A winning football program in terms of wins and losses," he said without hesitation. "We all know ultimately, we can have the greatest APR in the world, the greatest graduation rate in the history of college football, but if you don't win games, they'll pat me on the butt out the door. They might do it with a smile on their faces.

"To me, it's a winning football program and a culture that does things the right way."

That turned out to be a prediction that came true.

It has been an ugly time at UMass for football. Since the decision was made to move up to FBS football in 2012, the Minutemen have not sniffed a .500 season. The high point of the FBS Era might have come in 2017 under former coach Mark Whipple. UMass was 0-6 to start the year and finished 4-8. Those Minutemen beat BYU 16-10, but also gave two SEC teams real headaches. UMass lost at Tennessee 17-13, and lost at Mississippi State 34-23.

It's been downhill from there.

UMass has now had three coaches in the FBS Era. Two, Bell and Charley Molnar were Power-5 conference offensive coordinators, while Whipple won the 1-AA national title here in 1998.

So, what is Bamford looking for in a new head coach? Will it be a former head coach with FBS experience, a current FCS head coach or a hot coordinator from a Power-5 or Group-of-5 school?

"I don't have a framework for anyone, any particular characteristics or side of the ball or coaching expertise," Bamford said. "I think you go into it, personality and fit and understanding the challenge here, the opportunity here, what you can do at UMass, what's going to fit from a recruiting standpoint.

"I think those are all important ingredients for our next head coach."

The somewhat shrinking UMass fan base has its ideas. Bring back Don Brown. Hire former UMass star Liam Coen. Go off the board and hire Valdamar Brower, another ex-Minuteman star who is rocking it at Springfield Central High School.

UConn set the bar for new hires when it announced Thursday that Jim Mora Jr. was taking over as the head coach. Mora Jr. coached at UCLA, and had stints with the Seattle Seahawks and Atlanta Falcons as their head coach. He is going to be an assistant at UConn the rest of the season, getting the lay of the land, so to speak.

Mora was an OK college coach during his time at UCLA, going 46-30. Both UConn and UMass would take that kind of record and run with it.

So, if you are looking for a Jim Mora type, the first call Bamford should make is to the Cincinnati Bengals for a chat with linebackers coach Al Golden. Golden's name had been floated for the UConn job.

And if you are wondering who is Al Golden and why should Al Golden be considered, this is directly from the Bengals' media guide.

"Golden's first head coaching assignment came at Temple, where he sparked one of the greatest turnarounds in college football history. Golden led [Temple University] to winning records in each of his last two seasons, after the school had achieved just two total winning seasons over its previous 26 years. His 2009 Temple squad finished 9-4 and tied for the MAC East Division title (7-1 record), earning a spot in the EagleBank Bowl, which was Temple's first bowl game since 1979 and only the third in the program's 112 years of existence. The team's nine wins in 2009 were also the second most in school history (program started in 1894)."

Walt Bell has been fired as the head football coach at the University of Massachusetts. In a statement from the school, athletic director Ryan Bamford, Bell and defensive coordinator Tommy Restivo have been let go.

I've written here about my alma mater, and some of it bears repeating. That's because if you think UMass football has been a dumpster fire, read this.

UMass' current facilities are far superior than anything Golden had at Temple, and he eventually built a winner. It was a winner that saw Golden, Steve Addazio, Matt Rhule, Geoff Collins and Manny Diaz all leave for Power-5 jobs, and eventually Rhule became the Carolina Panthers' coach.

I don't know if Al Golden is on anybody's radar in Amherst. But he built a program with less than he'd have here. It's worth talking about.