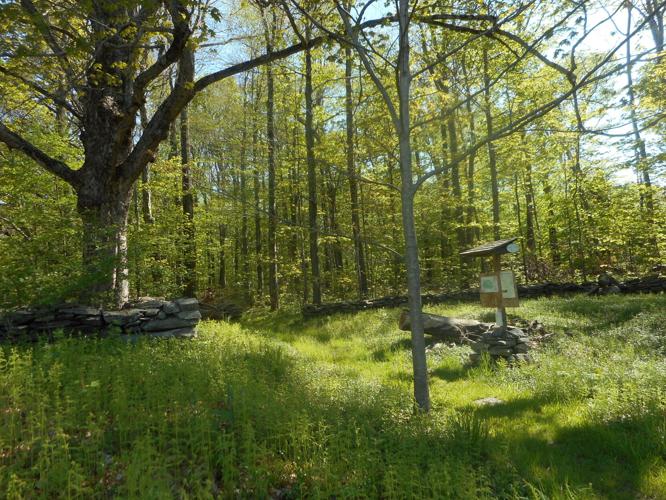 A stalwart maple greets those who set out on the Royal Hemlock Trail. 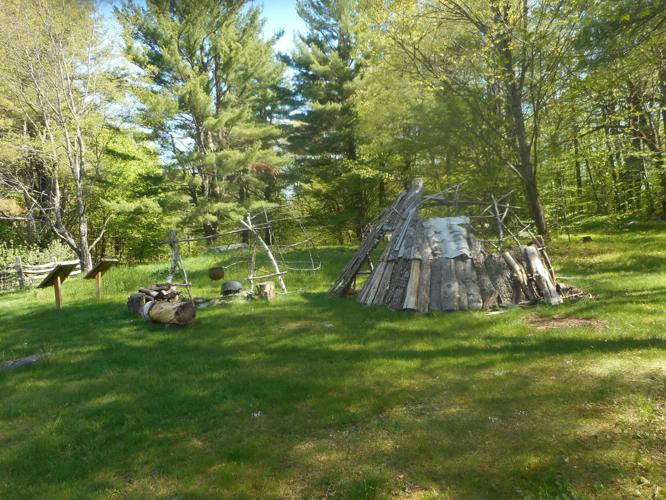 Above: In cooperation with the Mohicans, Bidwell House interprets a hunting village. 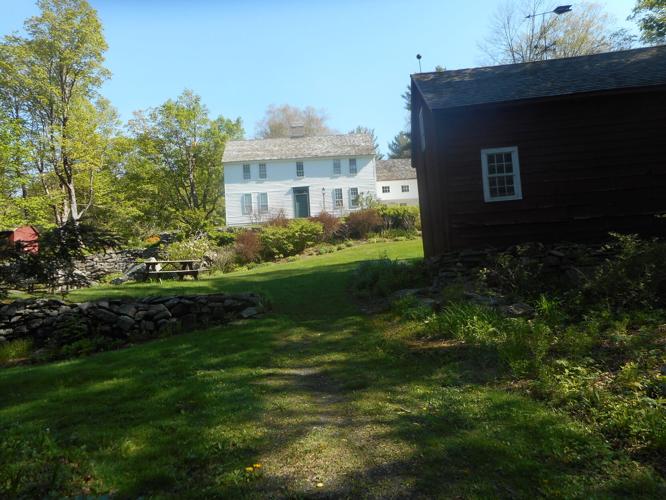 Bidwell House rises improbably out of the Berkshire woods.

Adonijah Bidwell arrived in Township Number 1 (Tyringham and Monterey) in October of 1750 as its first minister. He came from a wealthy Hartford family, according to Bidwell volunteer Richard Greene and, since Congregationalists believed that being prosperous was a sign of God’s favor, 10 years later he built a large and commodious house on the Boston-Albany post road, next to the meeting house, sure to impress his flock.

The family added two wings to the house later. The Bidwell House Museum, opened in 1960, sits on 192 acres with approximately four miles of trails, most of which are wide and flat for easy walking. So, yes, you have the opportunity to tour a colonial home (for a fee) or take a walk; or, recommended, do both.

To get to Bidwell House from most of Berkshire County, take Tyringham Road south from Rte. 20, just west of the Lee Turnpike access. That becomes Main Road in the village. After passing Tyringham center, turn right on Monterey Road. Pass the town boundary and a bridge, then turn right on Art School Road. Bidwell House is at the end. Check the website for house tours and fees; the grounds are open to the public, free, year around.

Maps are available at the kiosk, including one of Native American features. Check out the bark-covered wigwams of the hunting village, together with appropriate plantings. The carriage barn contains an introduction to the Mohicans, the indigenous people of Berkshire.

Of course you can take any trail you want and line them up in any sequence. Still, a certain logic recommends an approximately two-mile walk, beginning on the Royal Hemlock Trail. That route was once a town road and is now a part of the Native American Interpretive Trail. Undoubtedly hemlocks once lined the trail; now a “royal” sugar maple at a stone wall corner welcomes you.

The first site — they’re all well-signed — just to the left, is the chimney of the old sap house. Native Americans and Colonists made maple syrup. You could continue on the Hemlock Trail until it leaves the property and, eventually, leads to Berkshire Natural Resources Council’s Hudson Howard Reserve (Steadman Pond). For an exploration of the Bidwell trails, however, take a left after about a half-mile, on the Turkeybush Trail. The trails are wooded, interspersed with occasional open fields.

Take the Champion Oak Trail for a brief detour to visit the 171-inch diameter breast-high, 95-feet tall, surely a big tree, even if, as the sign lets on, the championship isn’t official. That trail is somewhat rougher than the others.

You then might want to follow the Three Wives Walk back to the field, with the abundant stone walls that surround the house and some of the spaces to partition differences in elevation. You could then take the Meeting House Trail and perhaps the Stone Wall Loop to complete a circuit of the property. A picnic table near the house is a good location for the obligatory snack, for this would be an excellent family adventure, lengthened or abbreviated as the clientele permitted. Note that the route taken is a potential cross-country ski loop.

From the mission statement: “The Bidwell House Museum is a New England Heritage Site providing a personal encounter with history, early American home life, and the Berkshire landscape through its land, house and collection.” The outing is cultural and natural.

A letter to the editor asks me to assess the tick population on various hikes. Because there is no way to do so, and particularly no way of predicting if a hiker will get bitten, hikers should assume ticks wherever they wander. Precautions include tucking pants into socks, long sleeves, using insect sprays, staying on the trail and, most importantly, checking yourself for ticks after a hike. The threat of Lyme Disease should not deter time in the woods, however.

In Monterey, another big slice of land heads into permanent preservation