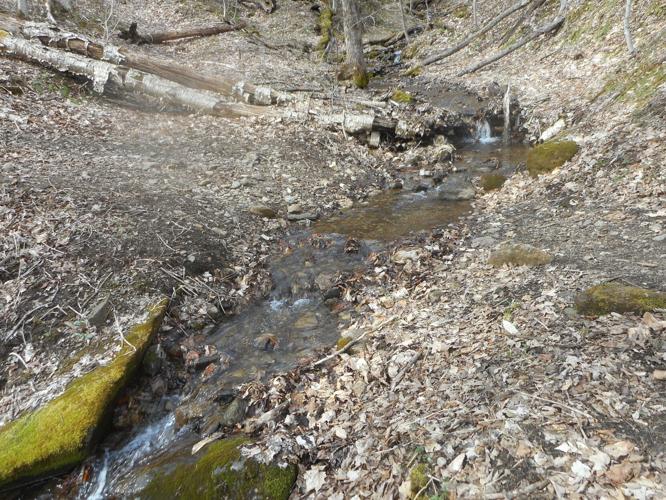 After following Notch Brook for over 2 miles, the Bellows Pipe Trail finally crosses it. 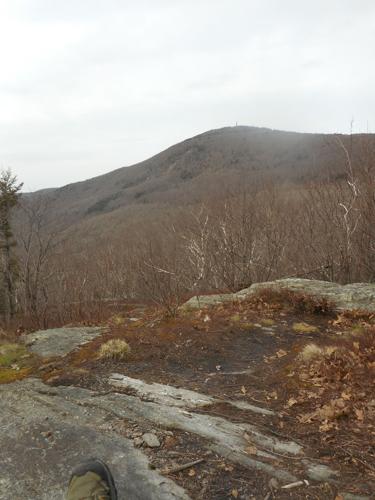 From the cliffs of Ragged, Greylock rises ominous in mid-spring. 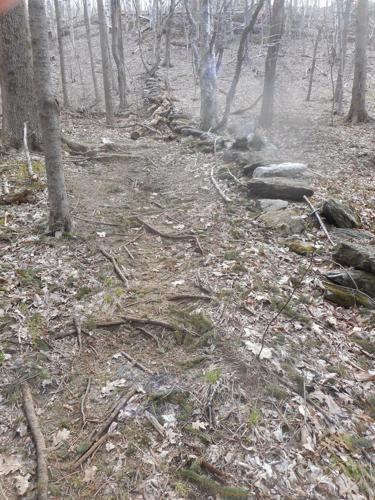 The Ragged Trail takes off at, and follows, a stone wall.

The Bellows Pipe Trail on the Mount Greylock State Reservation passes over the notch between Greylock summit and Ragged Mountain. To address a continuing confusion, the trail begins to the south off Gould Road in the Greylock Glen, Adams; and to the north near the Notch Road gate, North Adams. Many accounts of climbing the Bellows Pipe — named, Henry David Thoreau thought, because the force of the wind through the notch was like that of a bellows — do not clarify which end they’re starting from. How about you start at the north end to climb to the cliffs of Ragged Mountain, a 2,517-foot ridge?

You are unlikely to see anyone you know or, for that matter, anyone, on Ragged. It’s a remote location, clothed in spruce/fir forest unique in Berkshire to it and to the Greylock summit. The view southwest from Ragged’s cliff to the summit is arresting, different from any other view of Greylock. Thoreau may have climbed to the cliff to take a compass bearing on the summit during his 1845 climb of the mountain. In 2.8 miles you will climb 1,213 feet in elevation, on land belonging to the city water supply until nearing the saddle; therefore Bellows Pipe Trail is not blazed, although the state reservation boundaries are blazed blue where you pass through them near the saddle.

All road intersections to get to the trailhead are signed. Depart south from Route 2 in North Adams between the airport and downtown on Notch Road. Follow up through residential and wooded land to a sharp left, where Pattison Road enters right. Continue to the intersection with Reservoir Road. You might find a parking space directly ahead, at the Bellows Pipe trailhead; or continue right up to the Notch Road gate parking area and walk back down.

You can see North Adams’ Notch Reservoir through the red spruce plantation on your left. The lower part of this trail is used for reservoir maintenance and, occasionally, logging, hence the culverts and ditching. It climbs gently to an area once cleared as a log landing — trucks entered that far. Now you begin to encounter cobble stones and stone gutters in the steeper sections, dating to the early 19th century, when there were several farms in this highland valley. Innumerable tributaries to Notch Brook cross under or over the trail. Large sugar maples descend from late 18th-century forebears, when Jeremiah Wilbur and his family cut this road and boiled down the sap. On a recent morning the trail passed through acres of spring beauties in flower, the multi-colored leaves of trout lilies and occasional trillium.

You begin to catch glimpses of Ragged across the valley on your left. Snowmobilers built the wooden bridges, raising the question of whether they will be maintained as snowmobiling on the mountain becomes less frequent due to climate change. Last winter dropped numerous trees on the trail, which the reservation crew maintains. Climbing with a purpose, the trail leaves the brook far below until, passing over a crest, there it is underfoot. On the other side, red arrows mark a slightly less steep and less-eroded route snowmobilers and you, too, should use to climb to the saddle between Greylock and Ragged.

An old and casual stone wall marks the turn-off for the blue-blazed Ragged Trail, about 1/3 of a mile to the cliffs. At first it follows the wall, right, losing a slight amount of elevation, then swings away, climbing steeply through the fir trees. Soon it starts zig-zagging to reduce the grade. Zigs include sharp turns along narrow ledges and finally a short ascent up the remaining cliff and into the stunted summit trees. An unauthorized trail enters left, but you turn right to find the bare, rocky cliff and its views. You can’t help comparing your vantage point to that of an eagle’s aerie.

A good place for a snack break, of course. Although the Department of Conservation and Recreation wants to protect the top of the ridge, banning trail-making and maintenance, you may explore it to understand what the Greylock summit would be like without roads and buildings. If you’re lucky, you may hear the “Sam Peabody” call of the white-throated sparrow, a call that transports you to boreal forests. Yes, you are privileged to experience this different zone and its ecology on the summit, with traffic, or on Ragged in a quieter form.