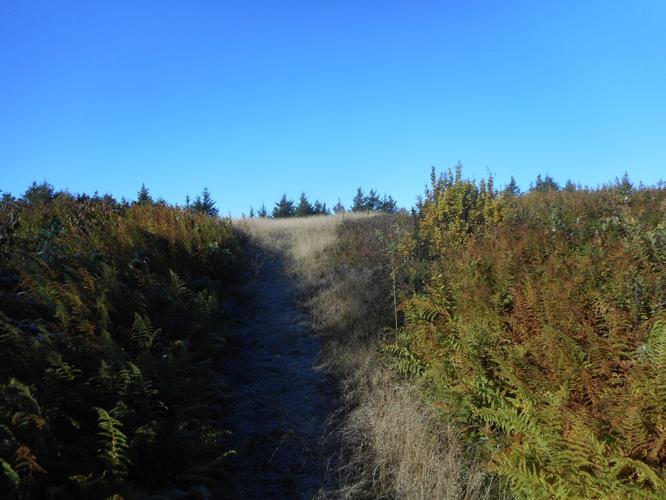 The ’33 Trail and old ski trail summit Berlin Mountain in a field of frosted grass. 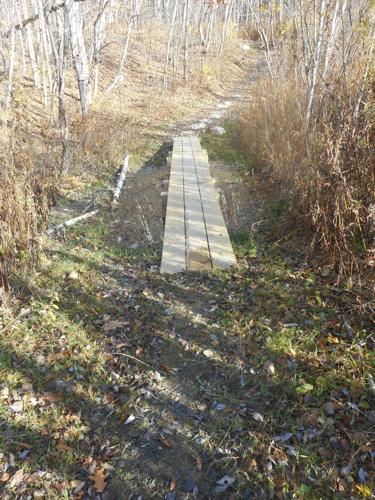 The Berlin Pass trail has been rerouted and bridges added. 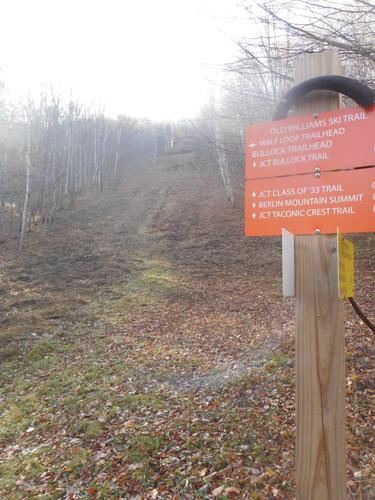 Trail signs reveal the trail nexus at the foot of the old downhill ski trail.

Now that they’ve had a taste of snow, outdoor folk think skiing. Hiking is still an option, however. Winter is one of the seasons — but only one — for which the old Williams College ski area is being repurposed and the road to it, plowed. The foot of the old downhill ski run is now a nexus of signed and marked trails, all fit for hiking; some fit for mountain biking and some for skiing.

It takes courage to find the area, which is at the end of a long gravel road into successively wilder country. At the junction of Routes 2 and 7, south of Williamstown center, follow west on 2, the Taconic Trail. Take the first left, Torrey Woods Road, downhill and then straight where Oblong Road enters left and where Treadwell Hollow Road enters right.

Follow up steep hills to rolling terrain by, right, a marked path called the Turnpike, which connects Berlin Road (you’re on it) to the badly washed out old road the Sara Tenney Trail. Pass a parking area that serves the Class of ‘33 Trail (you passed the trailhead 400 yards ago). At last you come to the parking lot and kiosk at the end of the drive-able portion.

It was a fine spot for downhill races and ski jumping, developed by Williams College coach Ralph Townsend in 1960. “Coachie,” who stood 5-foot-2, was a native of Lebanon, New Hampshire. An outstanding junior jumper in Eastern, National and International competition in the 1940s, he served in the 10th Mountain Division during World War II. While attacking a steep hill in Cimon della Piella, Italy, he was shot up so badly the doctors told him he would never ski again. Instead he returned to the University of New Hampshire, where he won cross-country ski titles in ‘47 and ’49. He was Outing Club Director and ski coach at Williams beginning in 1950. He attained the U.S. Ski Hall of Fame in 1975. He died in 1988, having blessed the lives of hundreds of Williams skiers and outdoor enthusiasts.

The Berlin area holds snow and is steep. It was named for Townsend in 1979. The next year, which followed a succession of dry winters, competition was moved to artificial snow, first, to Brodie Mountain and then to Jiminy Peak, never to return — except that some backcountry skiers still maintain the slope. The NCAA soon dropped jumping from competitions. Berlin Mountain, by the way, is the highest in New York State — not in the Catskills or the Adirondacks.

For the premier hike — up the Class of ’33 trail, 2 miles of puffing to the Taconic Crest Trail north and down the old Berlin Pass Trail, 4.5 miles total — park either at the ’33 pullover or at the main parking lot. The ‘33 Trail, blazed blue, may not be as steep as the ski slopes but is steep enough. On the way you will pass the new campground with Scout-made privy and come out on the cleared Taconic ridge, an eye-opening experience on a blue-sky day. The sections of concrete on the ridge are left over from a fire tower.

You come out where the downhill ski trail starts, offering a short cut back to parking. But consider your knees and, instead, follow the white blazed TCT, a gentler downhill, to the intersection with Berlin Pass Trail. More views. Turn right, past the foundation of the toll-taker’s house. The road was opened in 1799 as the Williamstown Turnpike, a segment of a route from Boston to Albany.

With the help of the Student Conservation Association, Williamstown Trail Coordinator Dan Gura and volunteers have devised detours around the wettest and most eroded portions of the old road, right down to and including some bridges at the base.

For a taste of Berlin, less demanding but still sweat-inducing, try the Bullock Trail. Depart the kiosk on the main trail to the intersection at the foot of the downhill run. Turn right and up on the Bullock Trail, blazed yellow. Climb to a dense hemlock grove, where the former jump trail is close on the right. The trail swings to the left, before coming out, after a half-mile, partway up the college ski run, by which you can return to parking. Or you can continue on about a mile to the ‘33 trail, following that back down to the road, and the road to the parking area. Call that a 2.5-mile hike.

I don’t know about you, but I can’t visit the new Berlin Mountain Recreational Area without thinking of the man who laid out the ski trails and built the jump, who ran Winter Carnivals here and charmed those who knew him with stories as authentic as a New Hampshire winter and as exciting as flying off the end of a jump with two planks tied to your feet. The man for whom the area was named shortly before it was abandoned. The new life in the place is a fit continuation of Ralph Townsend’s spirit.