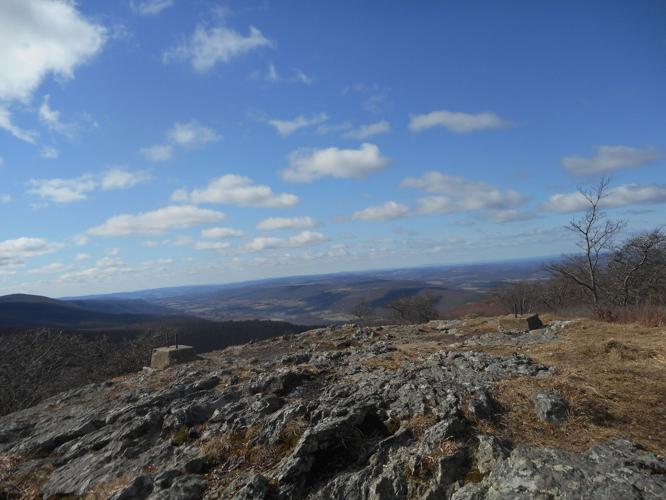 “Nothing could be finer”—the view southwest from the Alander summit. 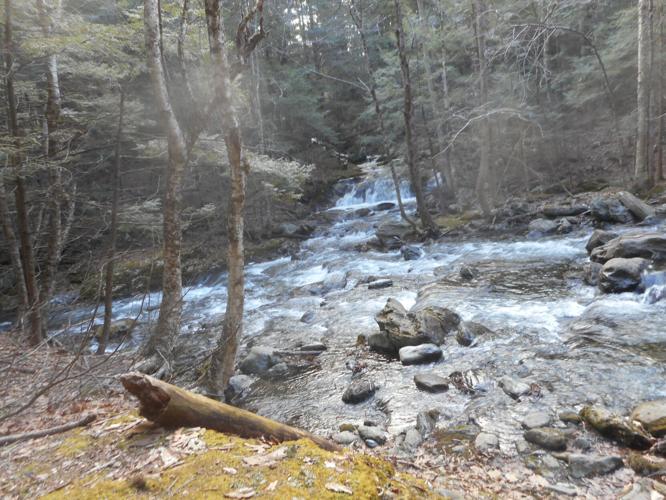 Where two brooks join, someone once milled. 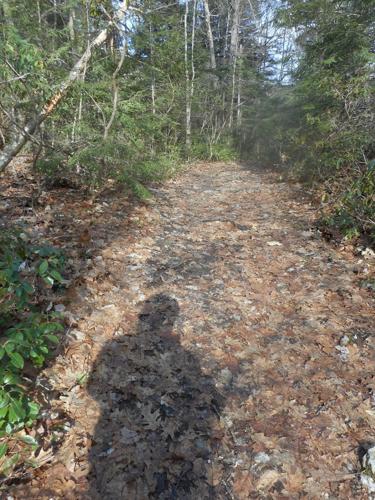 You may have noticed that walking in the woods was possible all winter long, albeit with micro spikes a couple times and once on snowshoes. Now comes another special season, fleeting, walking in the woods before the leaves are out. The spring ephemeral flowers are a likely reward, especially in South County. Seeing into the forest reveals matters of interest, such as stone walls or cellar holes, and gives you a sense of freedom that can be constricted by the green tunnel of summer trails. How about taking in Alander Mountain, in the town of Mount Washington, about as far south as Berkshire goes?

By the way, I polled fellow hikers in my recent visit, it’s Alan-der, not A-lan-der. Either way, the open ridge at the summit provides clear views from southwest to northwest, expanded by moving from one clear patch to another. All that without a whole lot of effort, because your automobile does most of the elevation gain, leaving you to climb only 840 of the 2,250 feet in elevation. Three miles in, 3 miles out, with only the last quarter-mile or so steep. The trail can be wet this time of year.

Take Route 41 south from South Egremont village, turning right just past the pond on Mount Washington Road. State Forest signs show the way from here on. After about 3 miles the road swings southerly and begins to climb to the ridge. Head straight to the Mount Washington State Forest headquarters, on the right, 9 miles from the village. Park in the lot and log in at the kiosk — a reasonable precaution, in case help should be required.

The Alander Trail is well-signed and well-worn, as it passes through cleared and formerly cleared fields, now being overrun by old-field pine — the fate on much former pasture in Berkshire. Study your route through the first intersection, obvious going out but not so on the way back. You descend past the site of a farmhouse, which has been removed, and cross the first bridge, over a brook. A trail to a charcoal pit departs, left. Just beyond the second bridge, across from a tributary to the brook, you find the remains of an old mill on your right, dating from a time when small, water-powered mills augmented the farmer’s income.

You are now in a hardwood forest, looking down on a steep decline to Lee Pond Brook below. Your trail is potentially wet, as you pass a route to the first camping area, on Ashely Hill Brook. Some large hemlocks flank your way. The sign to the second camping area marks about halfway to your destination, a fact someone has helpfully carved into the wood.

Suddenly, the understory changes to laurel, as the trail begins to play cat-and-mouse with yet another brook; occasionally brook and trail are indistinguishable, at least in early spring. Look for the blue blazes. The going gets steeper as you enter the Restricted Natural Area, land the Commonwealth has limited to person-powered recreation and study. This is habitat for rattlesnakes, although it is unlikely you will see any. You come to a small clearing where the fire warden parked his vehicle; beyond the trail shrinks to a footpath.

After a vigorous-but-short assent, you arrive at the cabin, once used by the fire warden but now available for hikers, first-come, first-served. It contains a stove, a table, four bunks and leftover hiker supplies. Scramble along the blue blazes and the white blazes, which signify the South Taconic Trail, to the ridge. Turn left to find the greatest extent of the open summit, with concrete footings. The 60-foot tower, erected by New York State, was short-lived, 1928-1930, in this location. It was re-erected on Washburn Mountain in Copake Falls, N.Y., before eventually being dismantled, as air survey became an easier way of spotting fires than marooning someone on a mountain top.

Sitting on the rock outcrop, enjoying a spectacular view, provides an ideal setting for a sandwich. You could turn south to follow the Taconic Trail to the Ashley Hill Trail and back to the first campground. Or you could go north to Bash Bish Falls, where you might have left a second automobile. The route described here is an out-and-back, however. A somewhat hidden sign directs you back to the cabin on your descent.

Nothing could be finer

Than to be on Alander