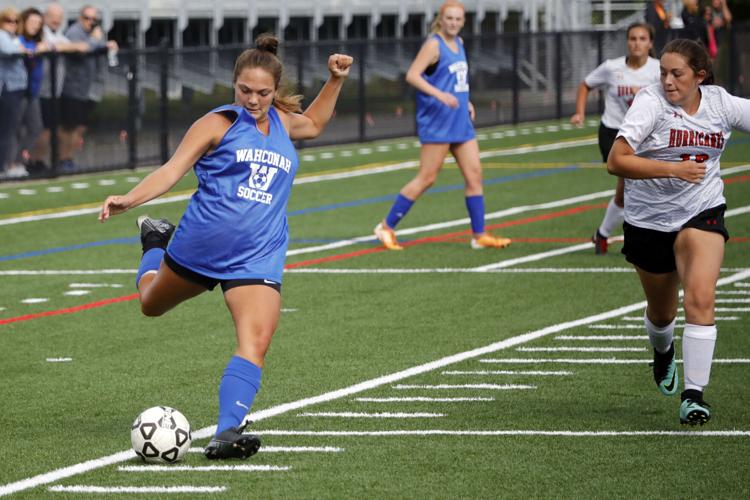 Wahconah and Hoosac Valley girls face off during a high school soccer jamboree, a series of shortened soccer matches between local high schools. 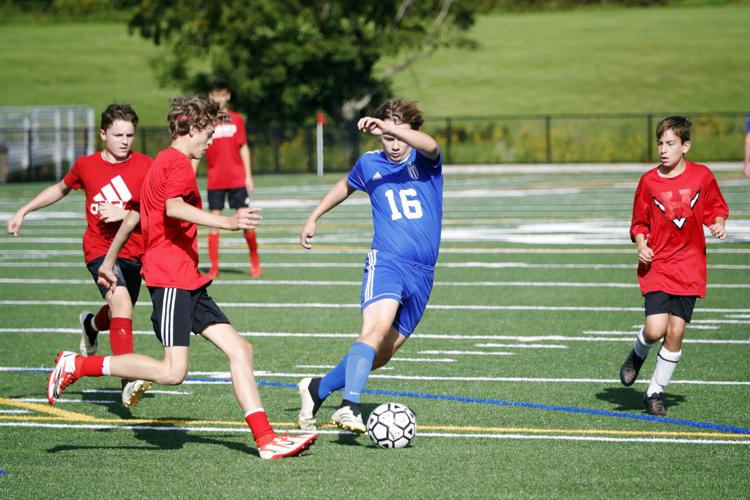 Wahconah and Hoosac Valley boys face off during a high school soccer jamboree, a series of shortened soccer matches between local high schools.

PITTSFIELD — A calendar isn’t the only way Berkshire County residents know when fall is quickly approaching.

If that brisk breeze on your neck doesn’t do the trick, look to the horde of buses that made an appearance at Berkshire Community College on Friday afternoon.

Eleven teams from six different schools participated in the 2021 Berkshire Kick-Off Classic. Teams from Taconic, Pittsfield, Lenox, Hoosac Valley, Mount Greylock and Wahconah participated in the jamboree, which featured brief 20-minute games and gave coaches a glimpse of their team on the field.

“It’s really useful, especially being our first live action,” said Patrick Mahoney, coach of the Hoosac Valley boys. “People typically play a little differently than they train and now we can adjust training plans based on what we do here.

“Especially playing Wahconah and Lenox, two pretty good teams, if you don’t do something right they’re going to show us by exposing it, which is a great learning opportunity.”

Hoosac Valley, the Fall II Berkshire South champions, lost three seniors to graduation. However, the Hurricanes feature a pretty unique roster with plenty of seniors and a handful of eighth graders.

“I was happy with the interactions I saw between them,” Mahoney said. “It’s been pretty fun for us to figure it out as a coaching staff and work together to get where we want to be.”

Speaking of unique rosters, Brian Seminara, coach of the Lenox girls, has his hands full after losing 12 players who played in the Fall II season. Seminara’s first season at the helm was the shortened, delayed spring slate.

“It’s feeling more normal as a season,” Seminara said of participating in the Kick-Off Classic. “You always try to play harder against different teams, especially on this turf and when the lights come on.”

The Millionaires made an appearance in the Fall II Berkshire North semifinals just five months ago. Molly Knight, Solia Herndon-Schmid, Aidan Burns and Mary Elliot, Lenox’s four captains, will lead the charge as the team looks to make another playoff run.

“All four are seniors and are wicked strong,” Seminara said. “They’ve been on the team for at least four years and some played here in eighth grade.”

Wahconah, which knocked out Lenox and won the Berkshire North girls championship, is another team dealing with plenty of roster matriculation.

“I think everyone is excited about this opportunity,” coach Meg Smith said. “We’re just working on the little details until we get those ironed out.”

The Warriors participated in a jamboree at Smith Academy early last week as the team prepares for an opening day bout at Mount Everett on Sept. 8.

“Our motto is just about getting better every day and they’re getting it,” Smith said. “I’m very proud of them.”

Players were required to wear masks and couldn’t head the ball in the spring as the Fall II season featured COVID-19 guidelines. If things continue trending in this direction, games will only look more familiar as the season rolls along.

Berkshire County will begin the high school soccer season following Labor Day, with most teams beginning the season on either Tuesday or Wednesday.

“[As the season goes on] I think we’re going to connect our three lines better,” Smith said. “My hope is that our forwards will continue to flash and our back line is going to get more comfortable.

“And hopefully we get the ball in the net, something we seem to focus on every year,” she joked.