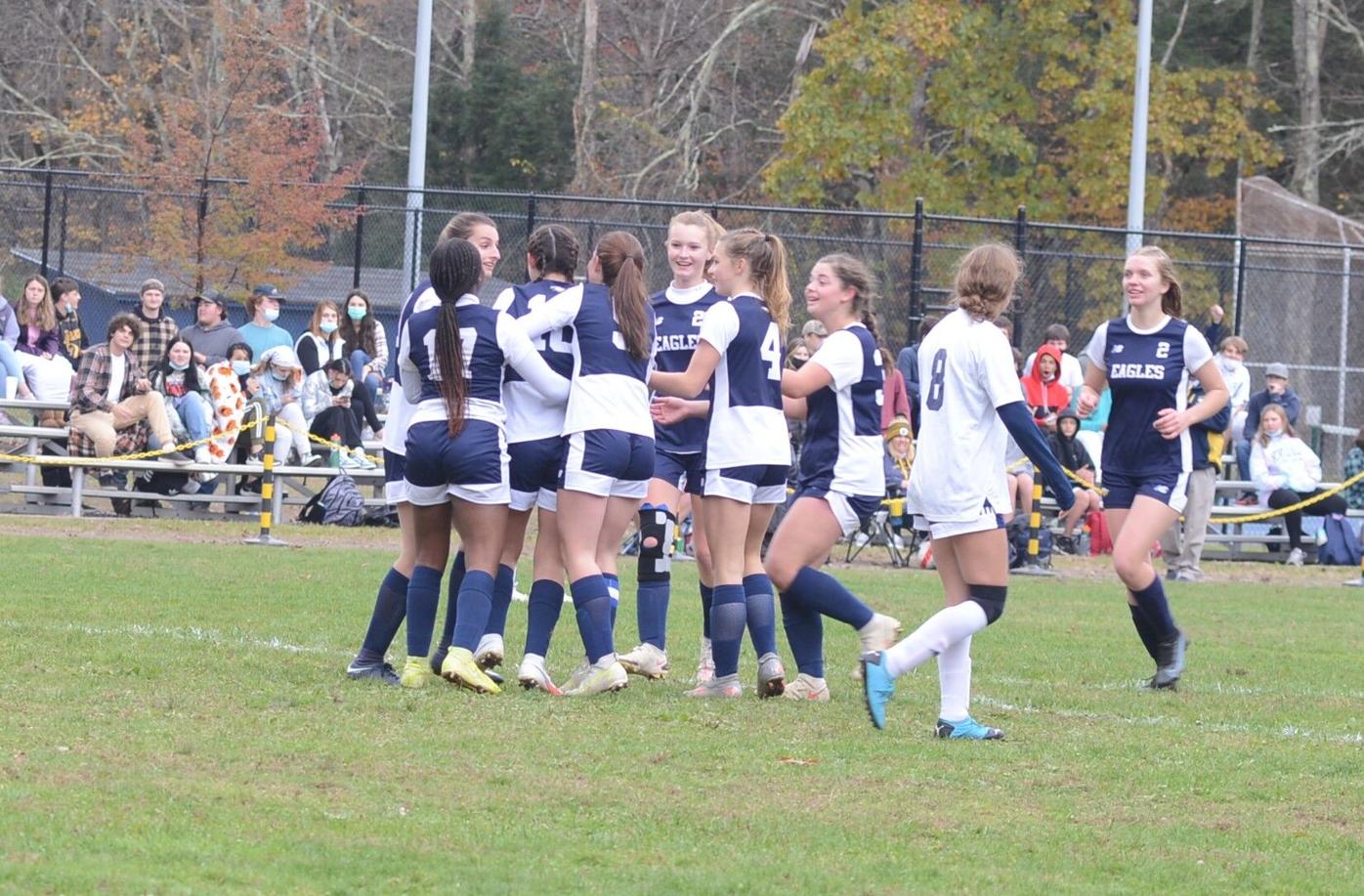 The Mount Everett girls gather around Emily Steuernagle after she gave the Eagles a 3-0 lead early in the second half of Thursday's game. 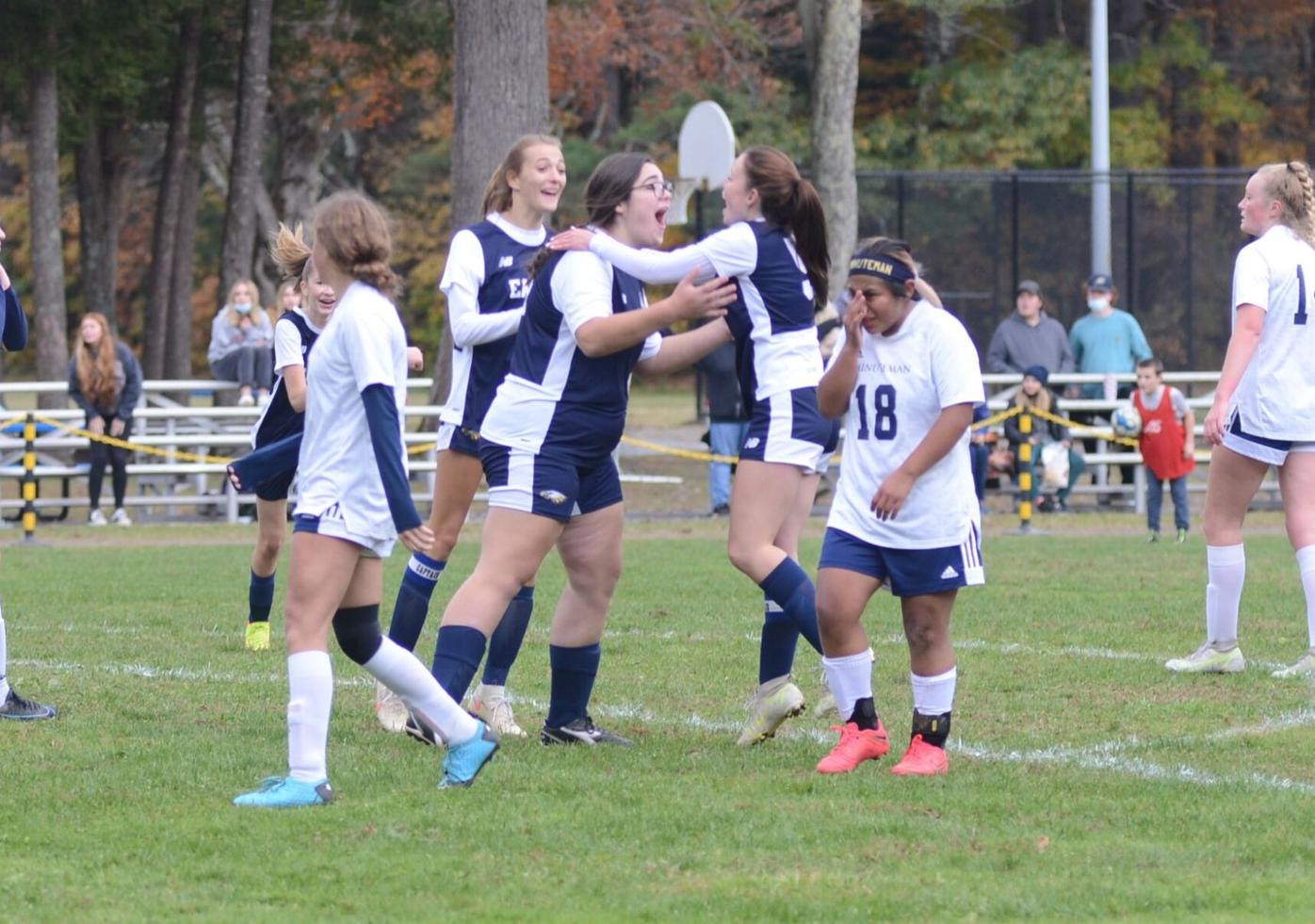 Mount Everett girls soccer players gather around Megan Loring after she scored a late goal in the first game of the state tournament. 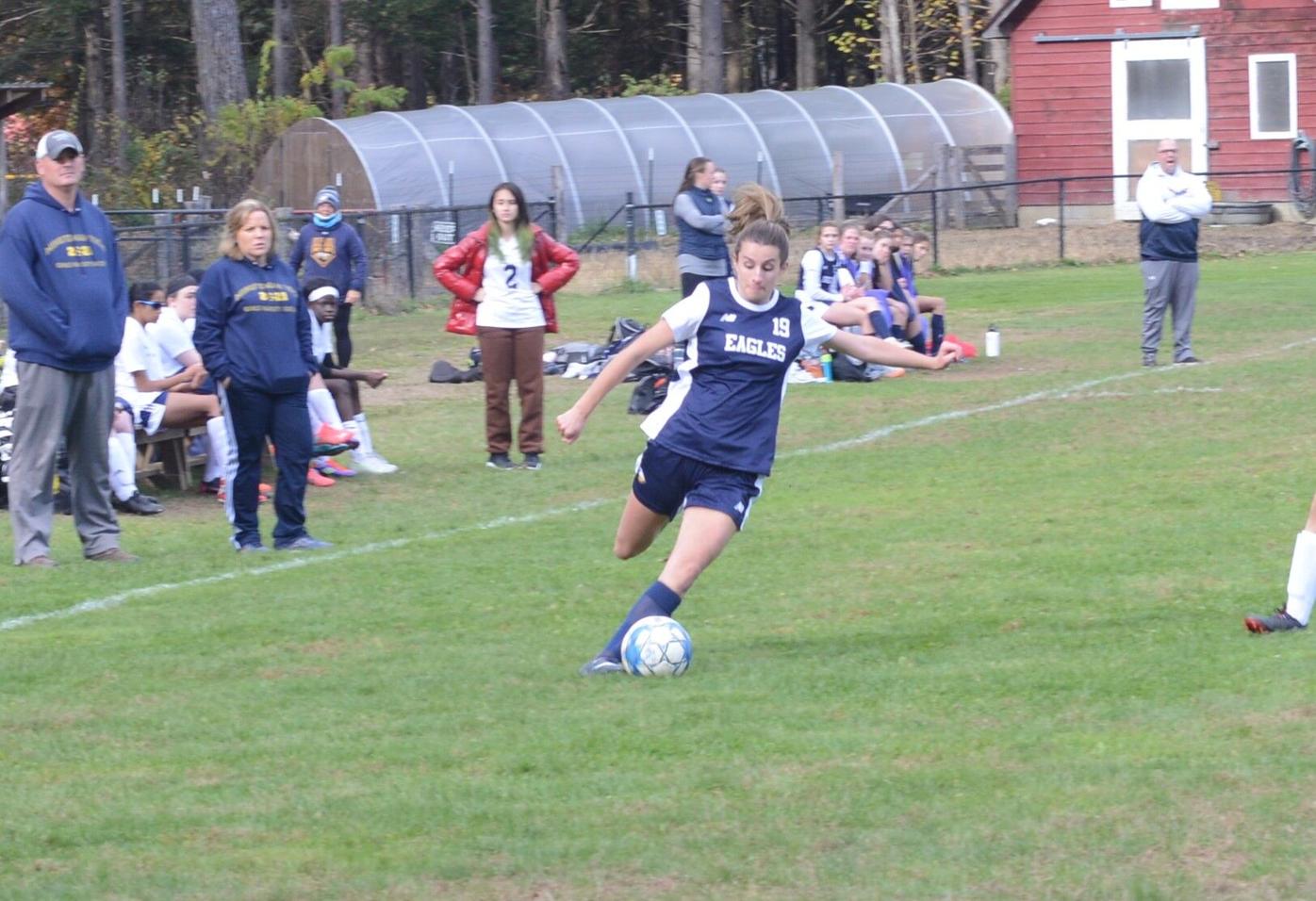 SHEFFIELD — It didn’t take the Eagles too long to get comfortable competing in the state tournament.

A three-goal burst early in the second half highlighted a commanding performance from the Mount Everett girls, a 5-0 victory over Minuteman Regional in the preliminary round of the MIAA Division V state championship.

Allison Steuernagle led Mount Everett’s charge with two goals on the night, the first coming just 7 minutes into the action. Despite the early strike, the Eagles seemed to just miss some shots in the first half, keeping the game close.

“Once we got the hang of not being offsides we found people with through balls,” Steuernagle said. “That is how Hudah [Ngoy Nkulu] got her goal and our midfielders did a great job with the ball today.”

Mount Everett, which had eight offsides whistles, entered the break with a 1-0 lead and marched onto the pitch with an additional level of urgency in the second half. It started with Chevelle Raifstanger breaching enemy lines with two shots inside the first 90 seconds.

Minuteman was forced to scramble across the field in order to withstand the pressure, but Raifstanger dished to Steuernagle for her second goal of the afternoon. Suddenly, over the next eight minutes, the Eagles changed the trajectory of the entire game.

Emily Steuernagle absorbed some contact from two defenders and tried to push the ball into open space. That open space, however, stretched all the way to the back of the net as the sophomore pinched the ball past the visiting keeper for the 3-0 lead.

With Minuteman quickly running out of gas, Ngoy Nkulu punched her ticket less than a minute later by squeaking past the defense and scoring on a breakaway. The icing on the cake came from sophomore Megan Loring, scoring with four minutes left in the game to increase the lead to five and cause the Everett bench to erupt in cheers.

Everett’s aggressive offense pestered the visiting defense for 80 minutes and the Eagles had the opportunity to put all their chips on the table due to the fact that Emma Goeway stopped nine shots, seven coming in the second half, to keep the scoresheet bare.

“She’s great,” Steuernagle said. “She doesn’t let anything past her and is a great goalie for our team.”

A bit of home cooking for No. 22 Mount Everett was just the start of the state tournament journey. The Eagles will load up the gas tank and hit the road on Saturday for a game at West Boylston High School, roughly a two-hour drive from Sheffield.

“It will be hard to get off the bus and play a good game,” Steuernagle said, “but I believe we are capable of doing it.”

West Boylston entered the D-V tournament ranked No. 11 and had a bye in the preliminary round. Saturday’s match is slated for 4 p.m.