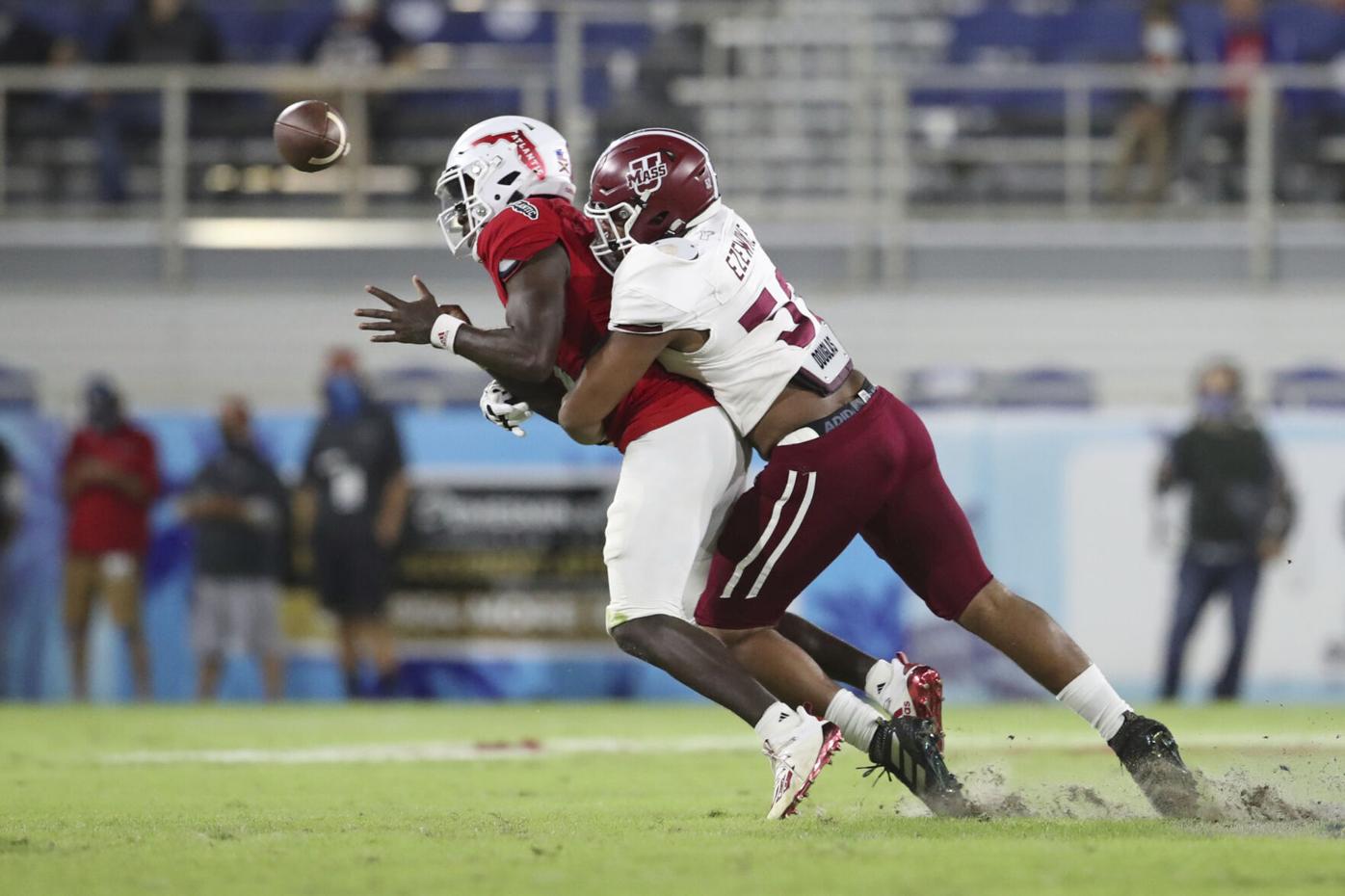 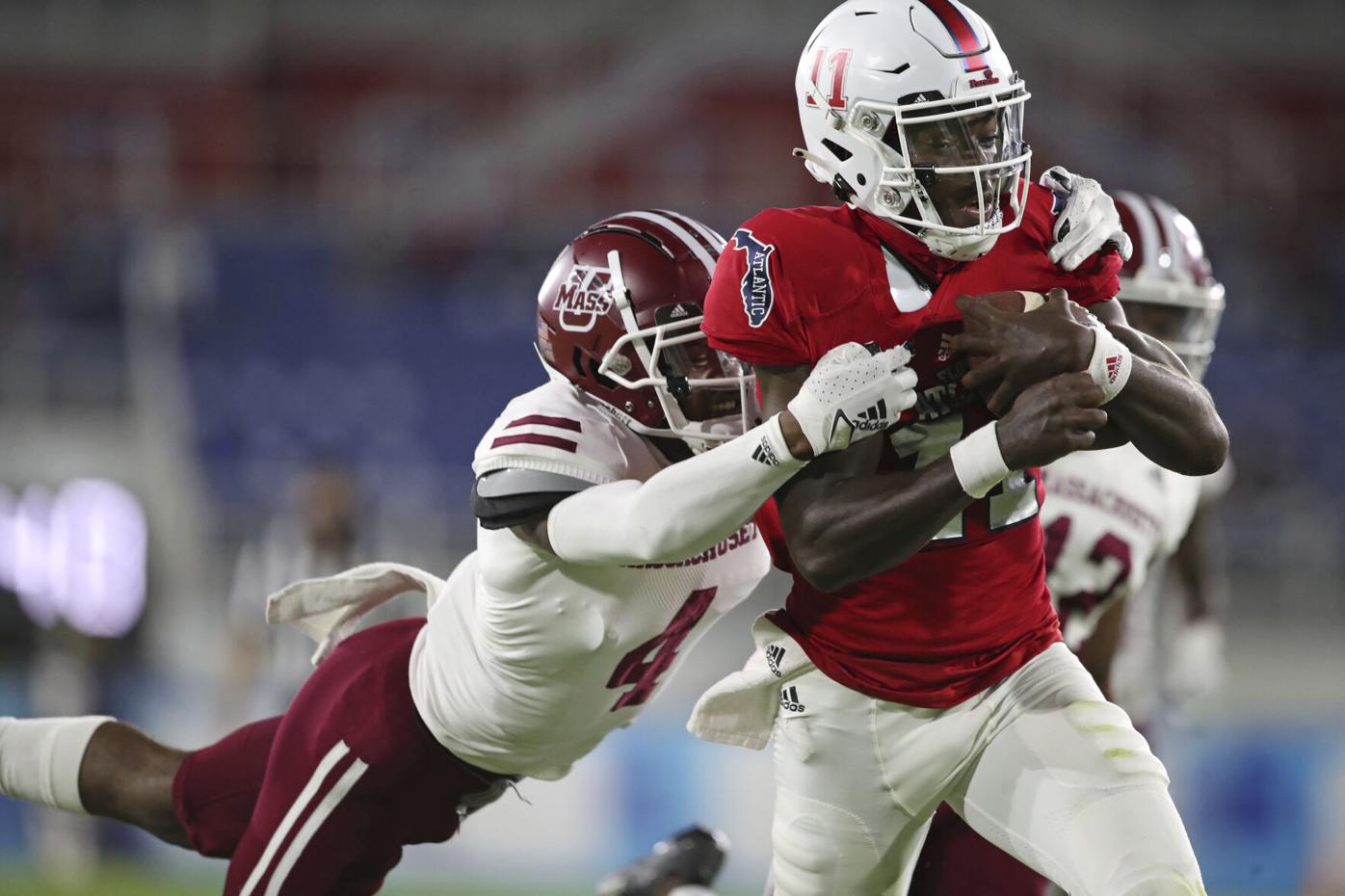 It has been a season like no other for the University of Massachusetts football team. So, it stands to reason that it would end in an unusual fashion.

The Minutemen will play their fourth and final game on Friday against Liberty University. The day-after-Thanksgiving contest will also mark the first time coach Walt Bell’s team will prepare like a “normal” football team.

“It’s been play a game, take three weeks [off], play a game, take two weeks. Now we’re going to have back-to-back,” Bell said in the walk-up to Friday’s game at Florida Atlantic. “Our young players will, at least, get to experience what a real game week is like for the last one.

The truncated 2020 football season started rather suddenly with an Oct. 17 game at Georgia Southern. It was three weeks until the Nov. 7 game at nationally-ranked Marshall. Now, it was two weeks between the Marshall game and Friday’s 24-2 loss at Florida Atlantic.

The Black Friday match against Liberty will give Bell and the Minutemen exactly six days to prepare. That’s very similar to what the Minutemen would have done in a normal week.

The 8-1 Liberty Flames of coach Hugh Freeze were knocked from the ranks of the perfect and the Associated Press Top 25 with a 15-14 loss at North Carolina State on Saturday. The Flames gave up a touchdown in the middle of the fourth quarter and never caught up.

By the time the Minutemen finish their 2020 campaign, they will have played two teams in Marshall and Liberty who either are or were ranked in the AP and the Coaches Top 25 polls. Their four opponents have, going into this weekend, a combined 26-5 record, and none of them have losing records.

So between that and all of the COVID-19 testing and protocols the Minutemen have been involved in, to call it a trying season might be an understatement.

Bell was asked during last week if he and his staff have provided the UMass energy since the start of October. He said that it was just the opposite.

“The players have given us more energy,” he said. “Especially with a young group, they’re excited about everything. These guys are excited for every opportunity they get. They’ve been great at meetings, great in practice. For them, just having the opportunity to play has been the light at the end of the tunnel.”

As to the game Friday night, a sterling defensive effort was trumped by another inefficient offensive performance.

The UMass defense held Florida Atlantic rushing attack to 140 yards on 44 carries, for a 3.2 yard per carry average. Three of those running plays totaled 130 yards, so that meant on the other 41 carries, the Owls gained 10 yards.

FAU quarterback Javion Posey ran for 145 yards on 19 carries, including long runs of 31 and a 70-yard touchdown run. He also lost 55 yards and was sacked six times. If you take the 101 yards away from Posey’s net yardage, he had a net minus-13 yards rushing.

“We’ve got a really good young secondary group,” said Bell of a unit that held Posey to 13-of-27 passing for 203 yards. “Coach [Jason] Tudryn has done a really good job with those kids, how they prepare and how they are invested in each other as a position group. We’re excited about them moving forward. From the sack standpoint, you’ve earned the right to rush the passer when you stop the run. We did that in spurts.

“We were in man-to-man, cover zero, they were out there by themselves for the majority of the night because we knew we had to stop the quarterback run game.”

It was a game where UMass had only 147 yards in total offense on 55 plays, compared to 74 plays and 368 yards for Florida Atlantic. The Minutemen only had one play longer than 12 yards in the game. In fact, UMass has had only three plays of 25 yards or longer the entire season. The longest play of the season was a 37-yard pass play from quarterback Will Koch to receiver Taylor Edwards in the 51-10 loss to Marshall back on Nov. 7.

Looking back at Friday’s game tape, short passes and runs were either the game plan or what was left after the FAU defense got into its plays.

Watching the tape of the game, Koch did not have a ton of time to look downfield. Both of the sacks against him were coverage sacks.

“We’ve got to find a way to score points,” Bell said. “We’re going to get that fixed.”

Where the inability to score points hurt UMass the most came after Florida Atlantic had scored touchdowns on successive drives to turn a 7-0 lead into a 21-0 lead. The first touchdown came on a 15-play, 65-yard drive that ate up 8 minutes, 13 seconds of the third-quarter clock. FAU converted two third downs and one fourth down before getting a 16-yard touchdown pass to Brandon Robinson on a circus catch.

Unfortunately for UMass, the Minutemen went three-and-out on successive drives. That was sandwiched by a 70-yard touchdown run by Posey.

Despite that, when safety Tanner Davis blocked a punt out of the end zone for a safety, UMass had gotten on the scoreboard. It was 21-2. There was more than 15 minutes to play, UMass was getting the ball back, and if the Minutemen had scored a touchdown, it would be 21-9 or 21-10, with a two-point conversion, and a different game.

Instead, UMass took the short free kick at its 38, and had a drive stall on the FAU 36. Koch was sacked on the play.

“That’s a game-changing play on special teams right there. Not only are you going to get points, but you’re also going to get the ball on a short field,” Bell said. “We didn’t help ourselves.

“I feel for the other two-thirds of our football team, knowing how well they played and how they gave us a chance to win the football game.”