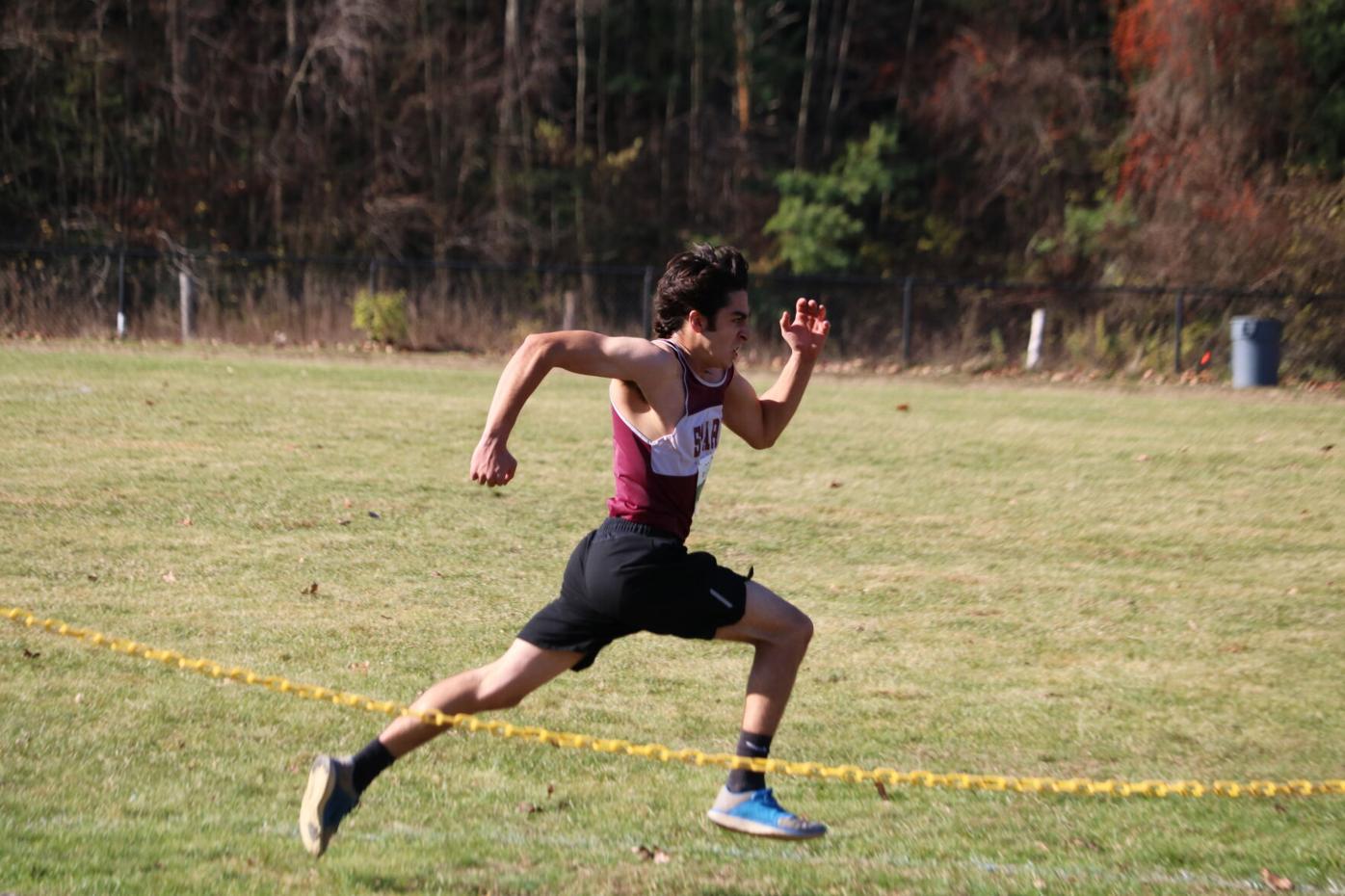 Monument Mountain senior Andrew McCarthy strides into his final kick during a meet at Mount Everett on Saturday. 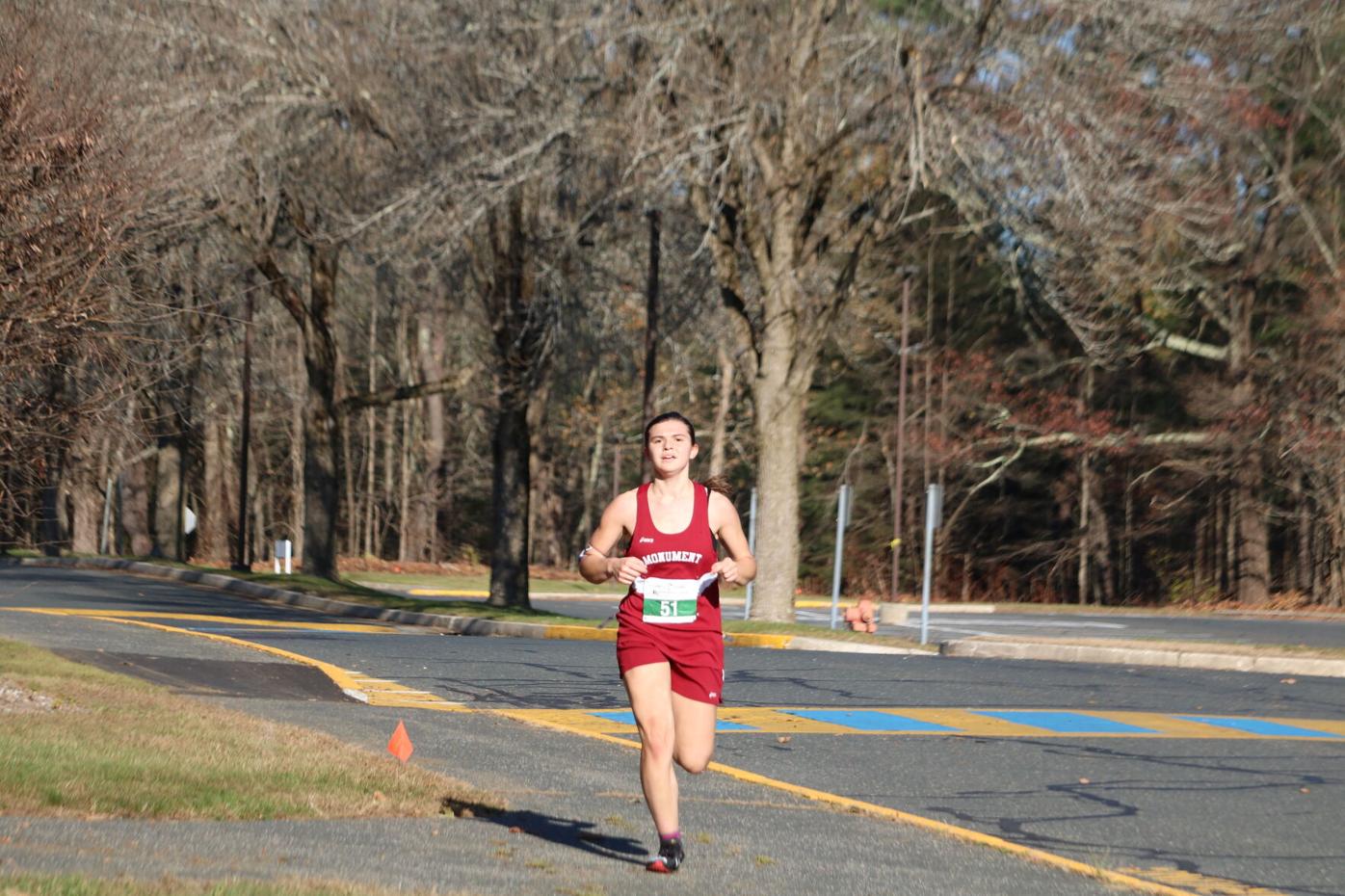 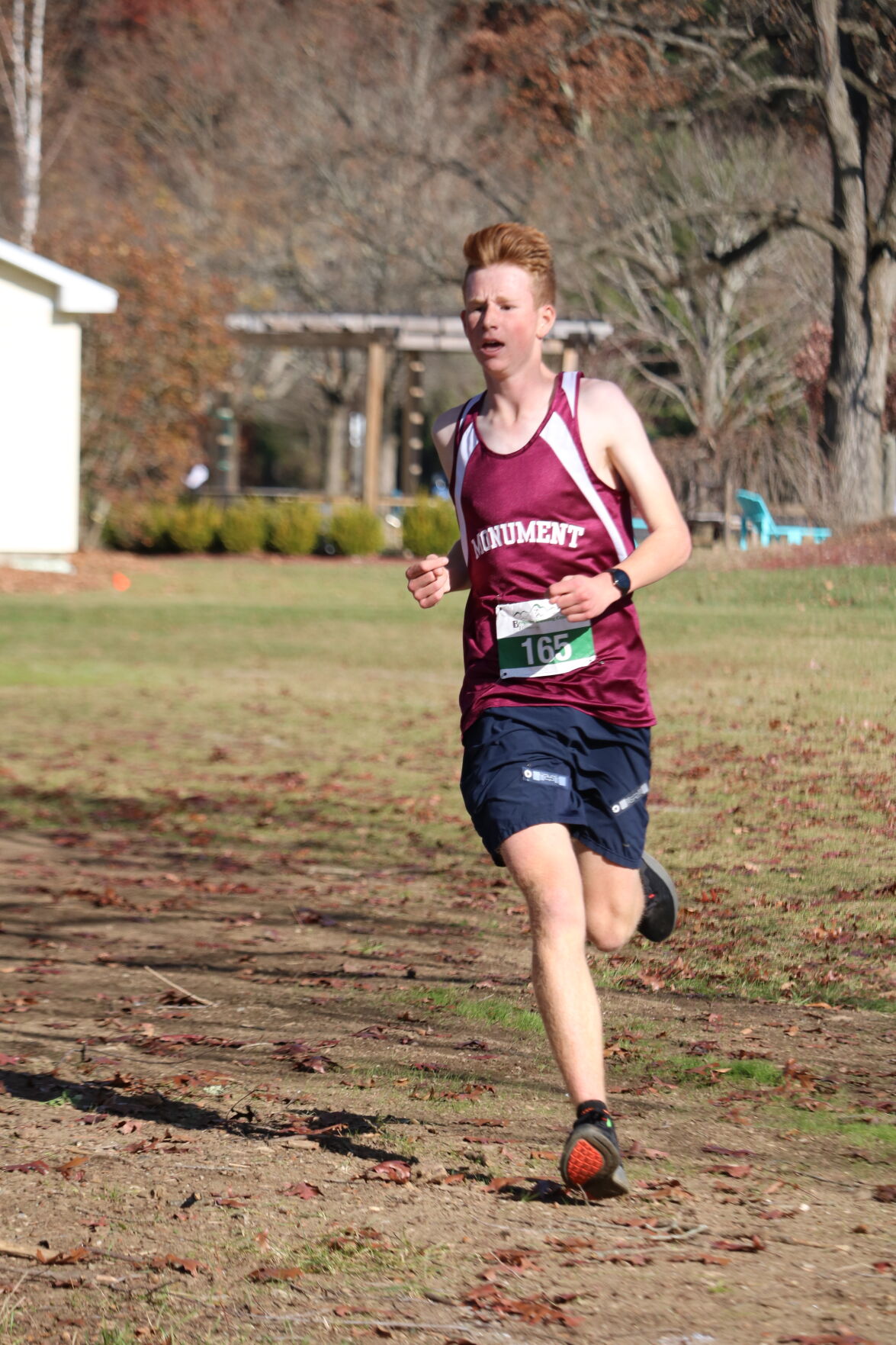 Keegan Leach got back in the win column on Saturday, picking up another individual first. 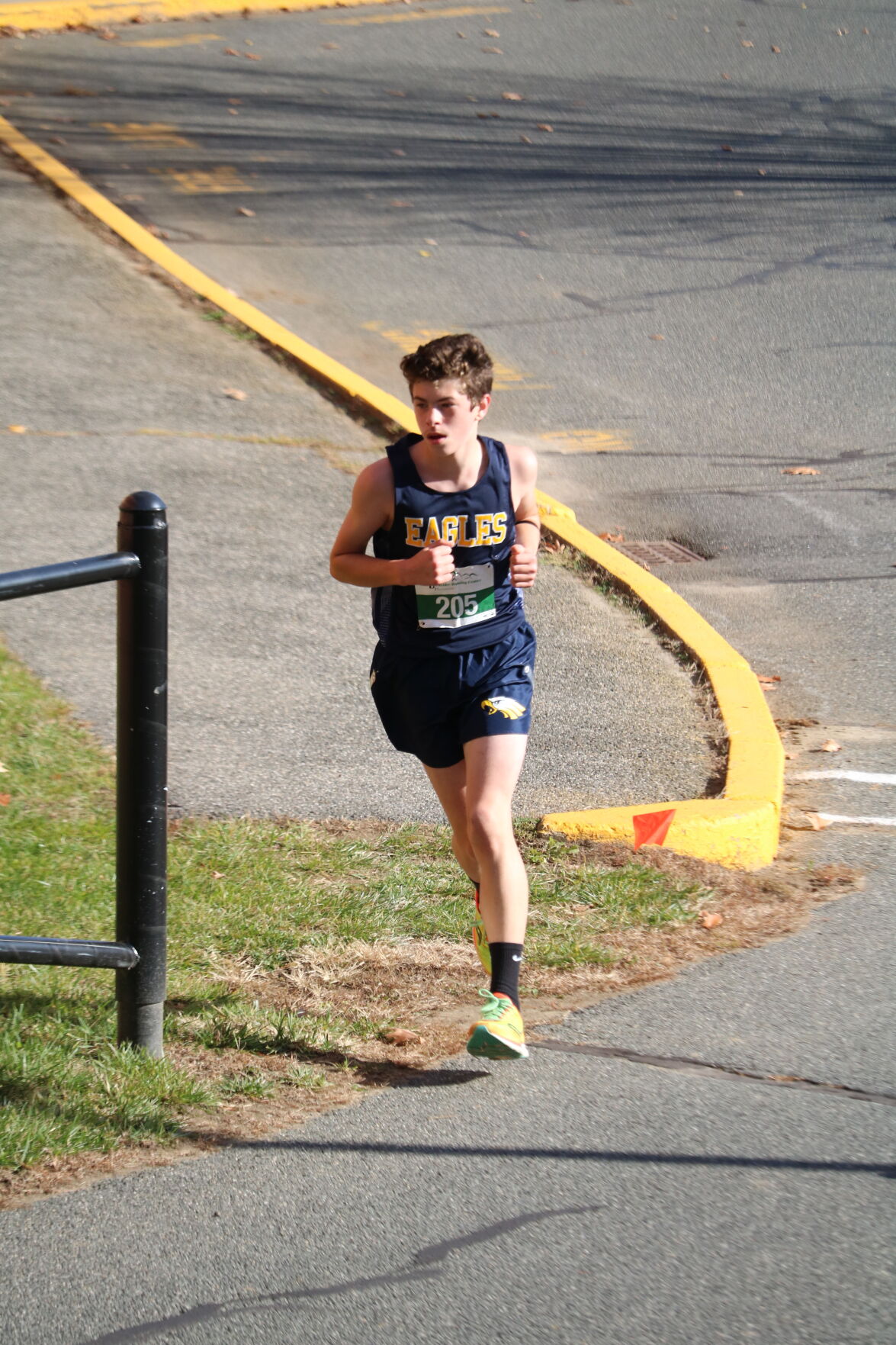 Mount Everett’s Matthew Lowe was the top Eagles finisher at home on Saturday. 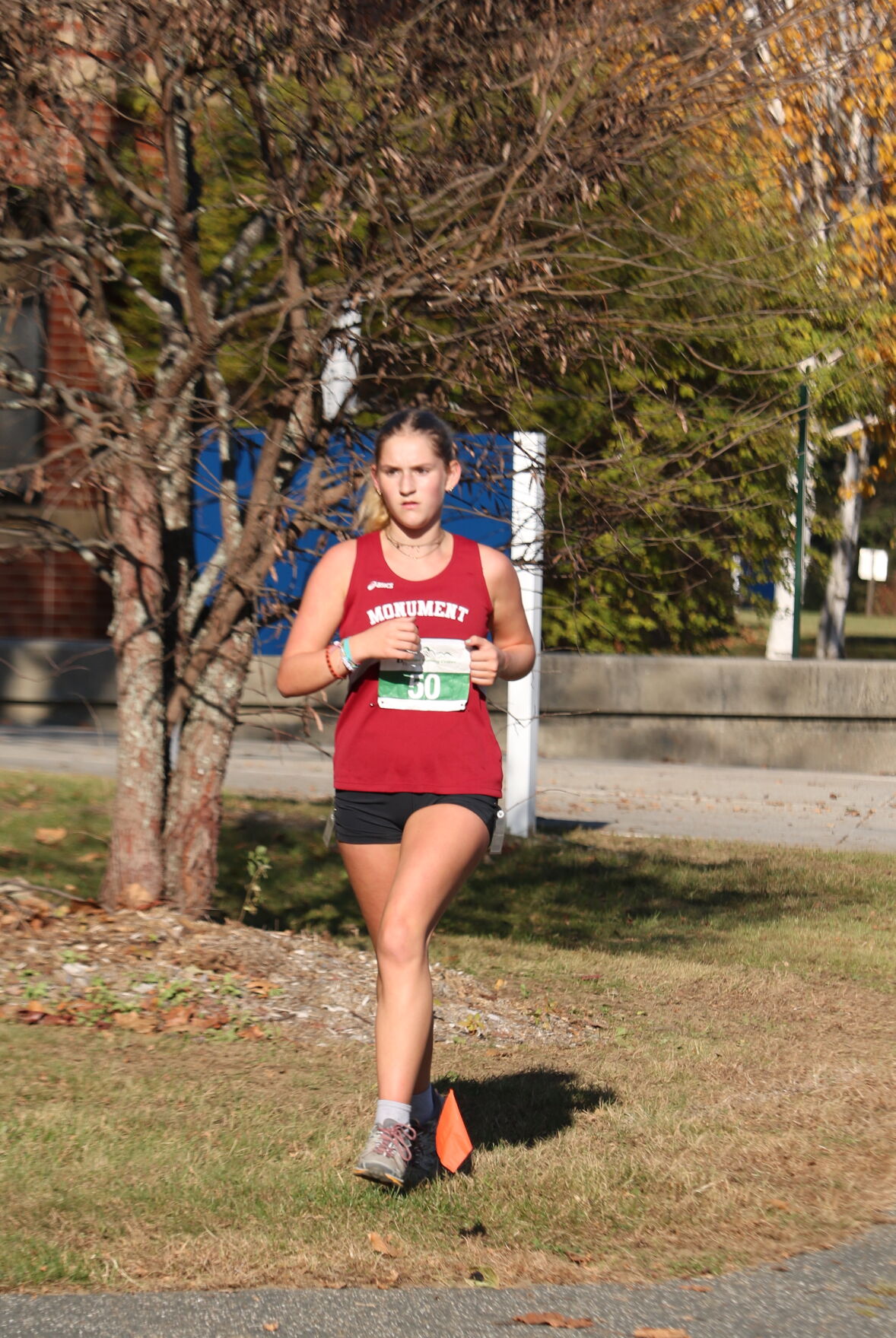 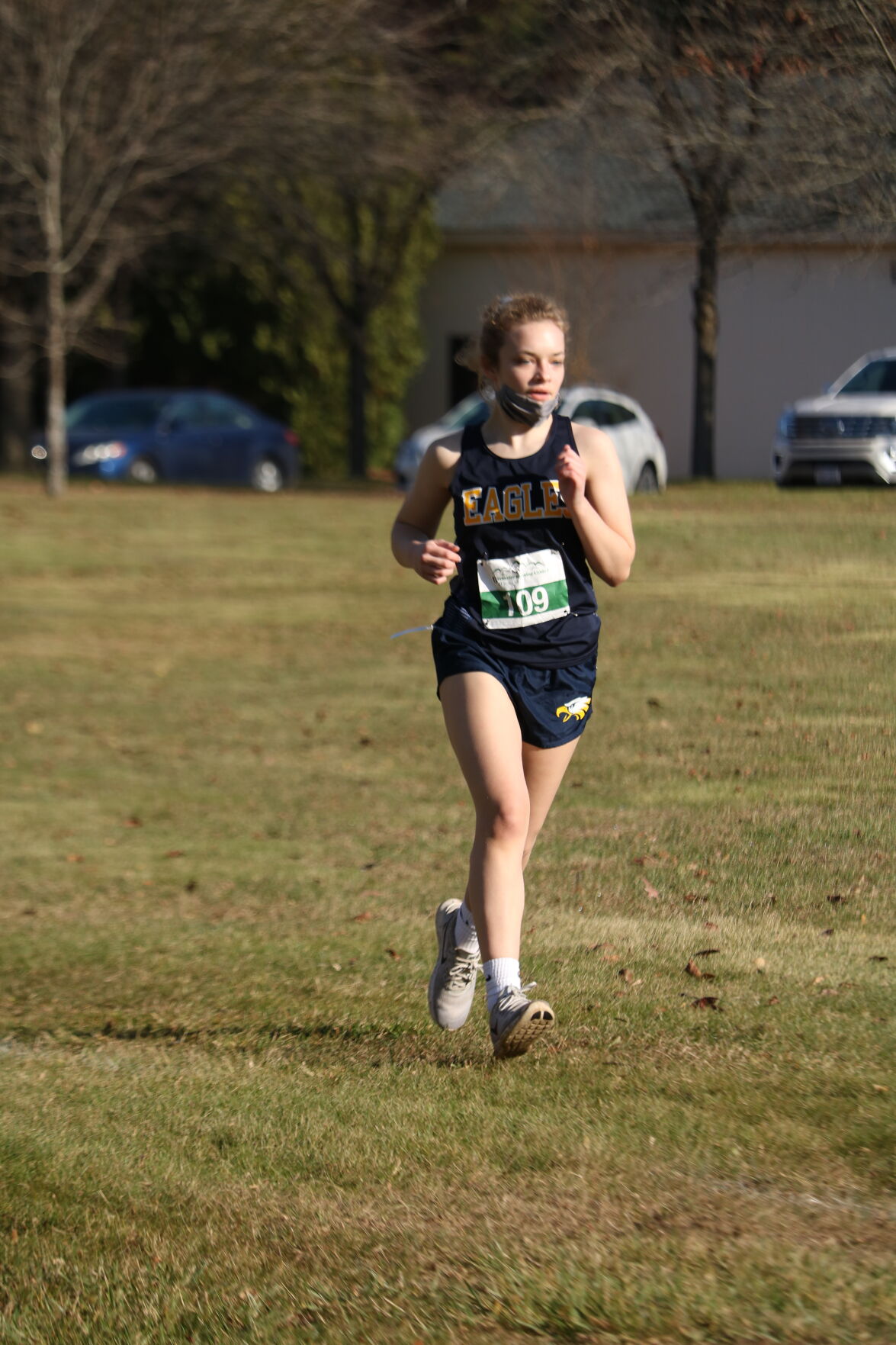 Mount Everett junior Rochelle Worth was her team’s top finisher on Saturday.

Monument Mountain senior Andrew McCarthy strides into his final kick during a meet at Mount Everett on Saturday.

Keegan Leach got back in the win column on Saturday, picking up another individual first.

Mount Everett’s Matthew Lowe was the top Eagles finisher at home on Saturday.

Mount Everett junior Rochelle Worth was her team’s top finisher on Saturday.

SHEFFIELD — An altogether weird season came to a close in the best way possible for a series of Monument Mountain seniors.

The Spartans swept their season finale at Mount Everett on Saturday, with Keegan Leach and Eliza Philp earning individual victories in their final high school meet.

“It’s meant a lot. We thought we wouldn’t have a season for a long time. But it’s always been the thing that I look forward to at the end of the day in the fall, running with the team,” said Philp, who finished in 22 minutes and 44.35 seconds. “Couldn’t do a lot of things this year, but we’ve been able to get together and run. Spend that time after school with friends, supporting and pushing each other.”

It was a pair of 15-50 victories for visiting Monument, which has 14 senior runners between the boys and girls teams.

“I’m just really, really happy with the maturity with all eight of my seniors,” said boys coach Ted Collins. “They were disappointed at the start, but they rallied and made the most out of it. They really took it well, and found a way to keep themselves motivated to run really good times.”

Leach and Peter LaRochelle are two of those seniors, and they finished 1-2 on Saturday. Leach picked up the win in 17:32.93, with LaRochelle right behind in 17:43. Junior Diego Salinetti was third in 18:22, before a trio of seniors; Myles Gennari, Andrew McCarthy and Charles Annecharico came rushing home. Seniors Isaiah Bennett, Jackson Smith and Logan Tonini also competed.

Spartans seniors Keegan Leach and Peter LaRochelle coming in 1-2 to the final 100 at Mount Everett. pic.twitter.com/ohIMEQ0Ec9

“They’re way better than where we finished last year,” said Collins. “Keegan, Diego and Peter all finished pretty well in the state. I think, you project it out, all three likely would be in the top 25. They worked so hard over the summer. I was really impressed with the strides they made.”

Without the allure of postseason championship meets, the Spartans focused on times and performing on their home course, where Ace McAlister holds the record in 15:58. McAlister won the 2018 NESCAC title in the 5K, and recently graduated from Trinity. He made an appearance at a Monument practice this fall. Leach and LaRochelle chipped away at his mark, eventually landing in the 16:20 range.

Girls coach Scott Annand had six seniors of his own this season, including Philp and team captain Paige Scott.

“What’s most impressed me, is that we came from a difficult situation, we had 28 strong come in and stay together,” Annand said. “Missing pasta parties, movie sessions, all those fun things, they came and wanted to be together and work hard.”

Eliza Philip of Monument Mountain cross-country cruising in as the first finisher at Mount Everett this morning, just under 23:00. pic.twitter.com/rMStZ7tOgW

“I remember getting discouraged in a lot of races last season if I wasn’t doing so well,” she said. “This year I’ve been able to keep going, even if you don’t feel great, I’ve had a growth mindset, and that has helped a lot.

“Today was pretty good. A lot of cheering while I was running, super supportive. That’s one thing I noticed everywhere this season was the teams supporting each other. We’re all going through this together, trying to have a season in this weird time together.”

She was joined by sophomore Aria Grossman, junior Ruby Citron, senior Anna Marie Romano and sophomore Zoe Holmes in the top five. Scott, who shaved 10 minutes off her home course PR this season, was seventh in 25:35. Fellow seniors Charity Loy, Rebecca Robertson and Gianna Bertelli all competed as well.

“Some of them did a lot of training over the summer. Eliza has been a really good trainer and she’s taken it to a different level. Aria Grossman the same, Ruby Citron has come from nowhere to being second or third on the team, Zoe Holmes, all these girls have helped set up a program,” said Annand. “We’re developing, you start with the togetherness, then work hard and have fun.”

A program is also growing at Mount Everett, where coach Courtney DeLorenzo had all underclassmen on her roster this fall, and a series of middle schoolers leading the way. She said she hopes numbers continue to grow next year when hopefully they’re allowed to incorporate all the fun extracurriculars that come with the cross-country season once again

“I didn’t think we were going to have a season until the end of August,” DeLorenzo said. “I was very excited, however, I was worried about the turnout. We didn’t get everyone back, but we got a large portion. The fact that we could run at all and the kids could be active, there’s a little bit of socializing. I think it’s been an excellent conduit.”

Junior Rochelle Worth was the first Eagle in during the girls race in 16th overall. Behind her were four freshmen. Matthew Lowe, an eighth-grader, was the top Mount Everett boy in 11th overall. Two seventh-graders, a sophomore and a junior joined him in the scoring. DeLorenzo was awed with how her kids rolled with the punches this fall.

“Their flexibility, no matter what the rules or protocols have been. No one complained, everyone was on board,” she said. “How kind and patient everyone has been. I’m just impressed with the maturity of my runners this year. They’ve really rose to the challenge.”

MEET AT WAHCONAHDALTON — The host Warriors managed a split with Mount Greylock on Saturday in the season finale.

The Wahconah boys were led by Alexander Perenick’s individual victory in a 21-34 team win. Perenick placed first in 18:22, holding of Mount Greylock senior Charles McWeeny by a little over half-a-minute. The Warriors grabbed four of the top-five spots, with Lucas Wildrick, Peyton Webb and Riley Gladu doing the damage.

On the girls side, Kate Swann made it a perfect season with another individual win, while helping the Mounties to an 18-45 team decision.

Swann finished in 19:36, more than a minute in front of teammate Grace Malone, who was second. Wahconah senior standout Haley Crosier was third in 21:30, narrowly edging longtime foe Jackie Wells, a Greylock senior, by four seconds. Greylock’s Ainsley Abel was fifth overall, and second in a line of seven straight Mounties to put the meet out of reach.