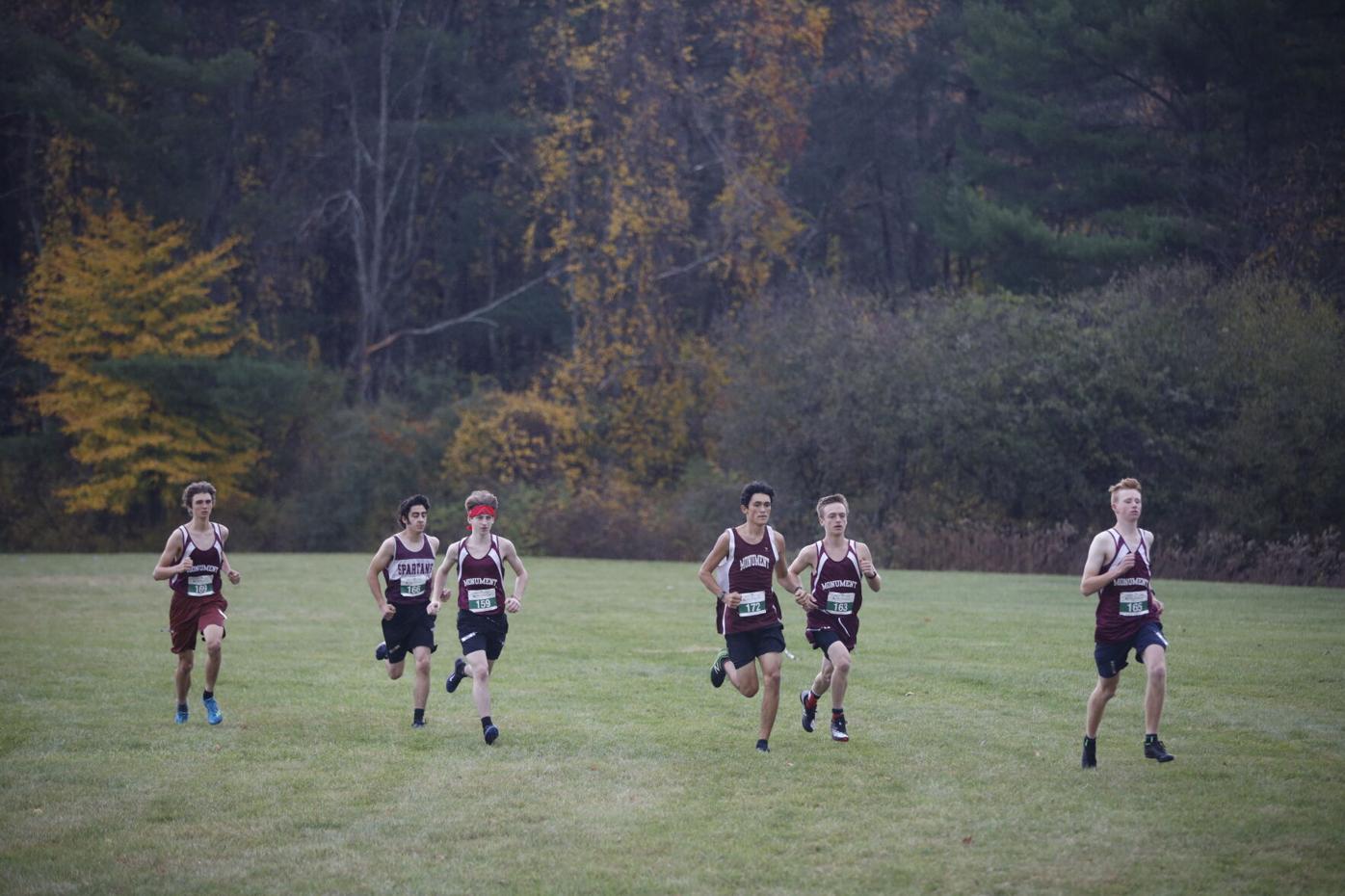 The Monument Mountain boys cross-country team, led by a podium sweep from Peter LaRochelle, Keegan Leach and Diego Salinetti picked up a home win over Wahconah on Saturday. 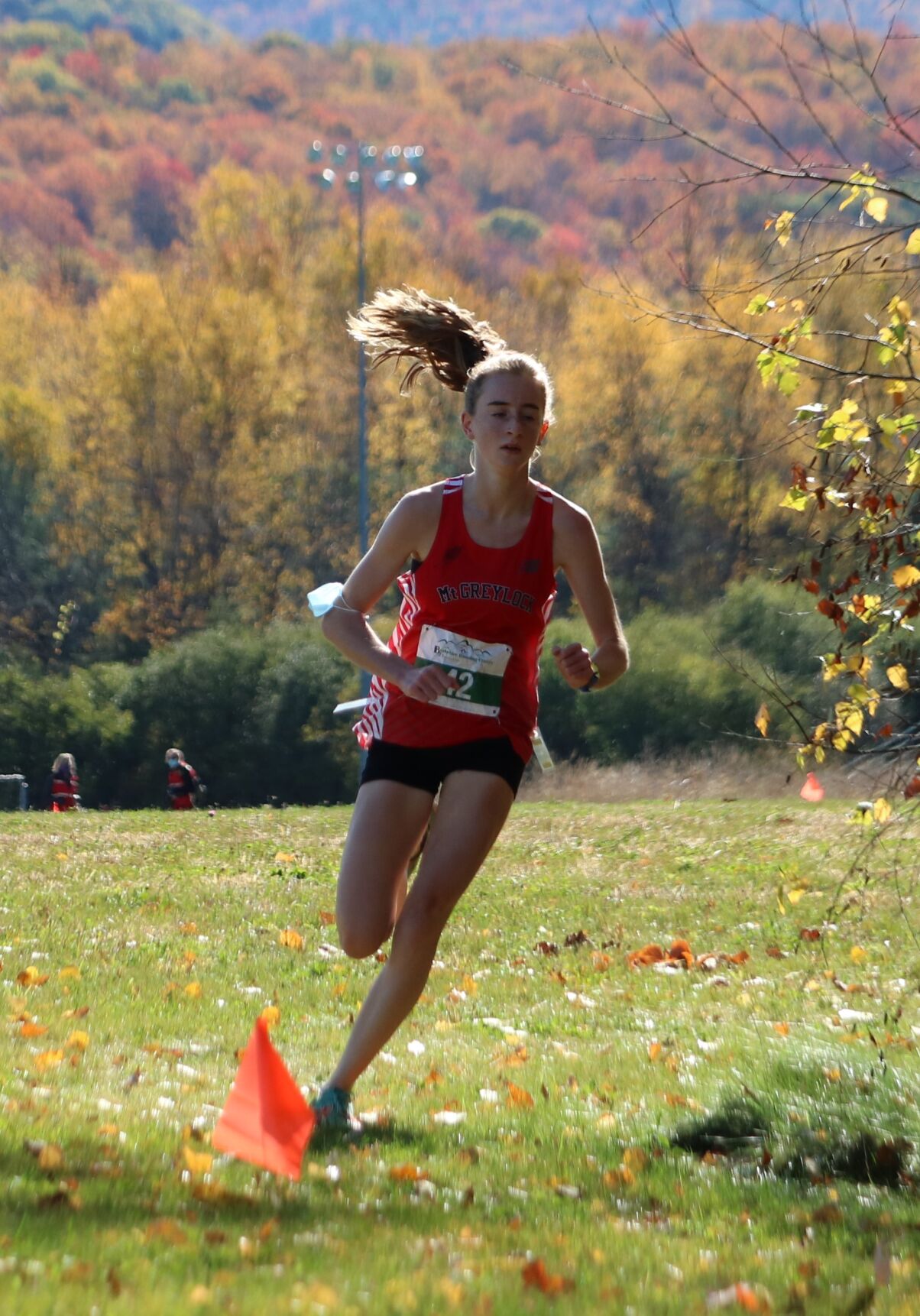 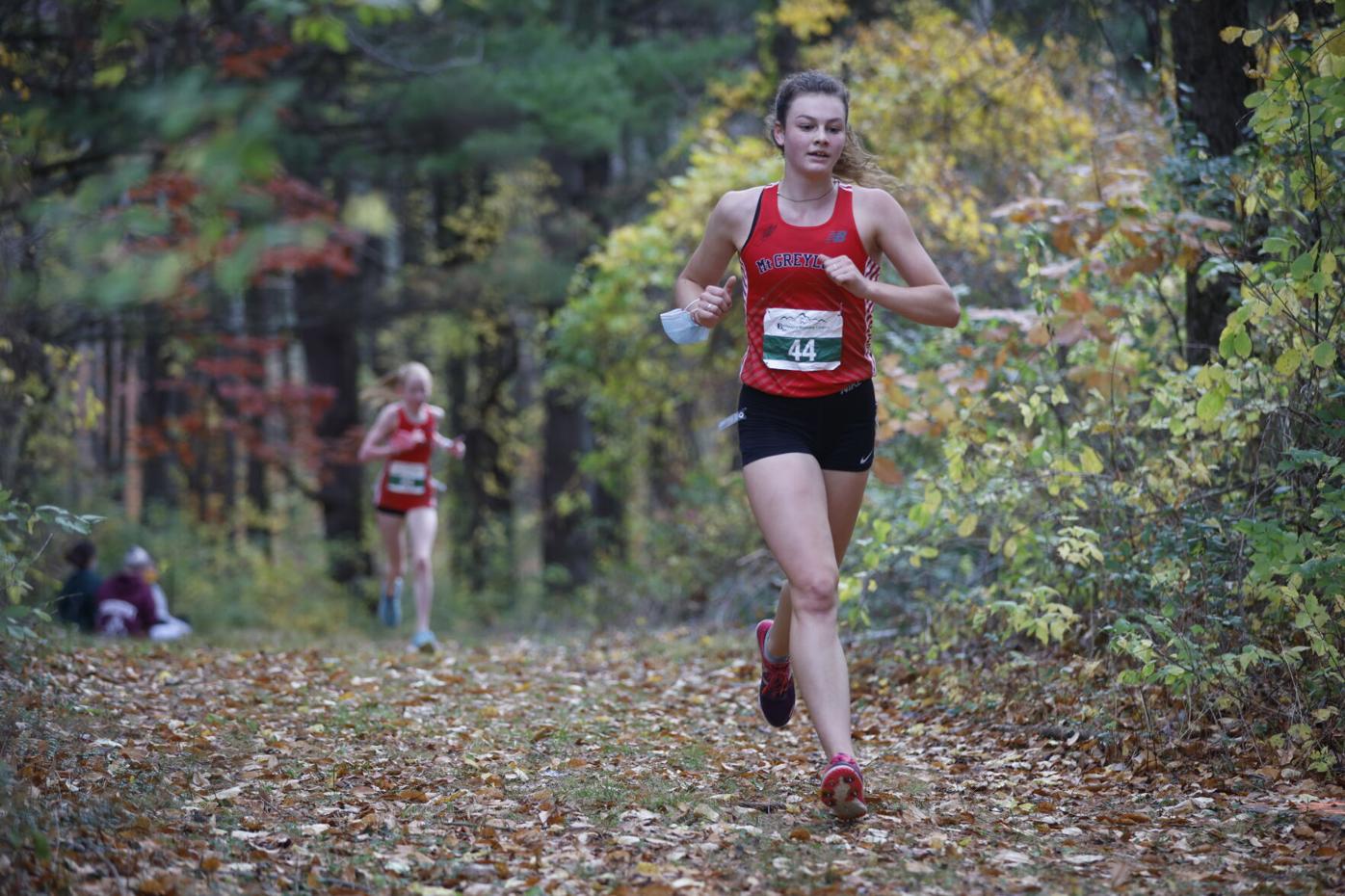 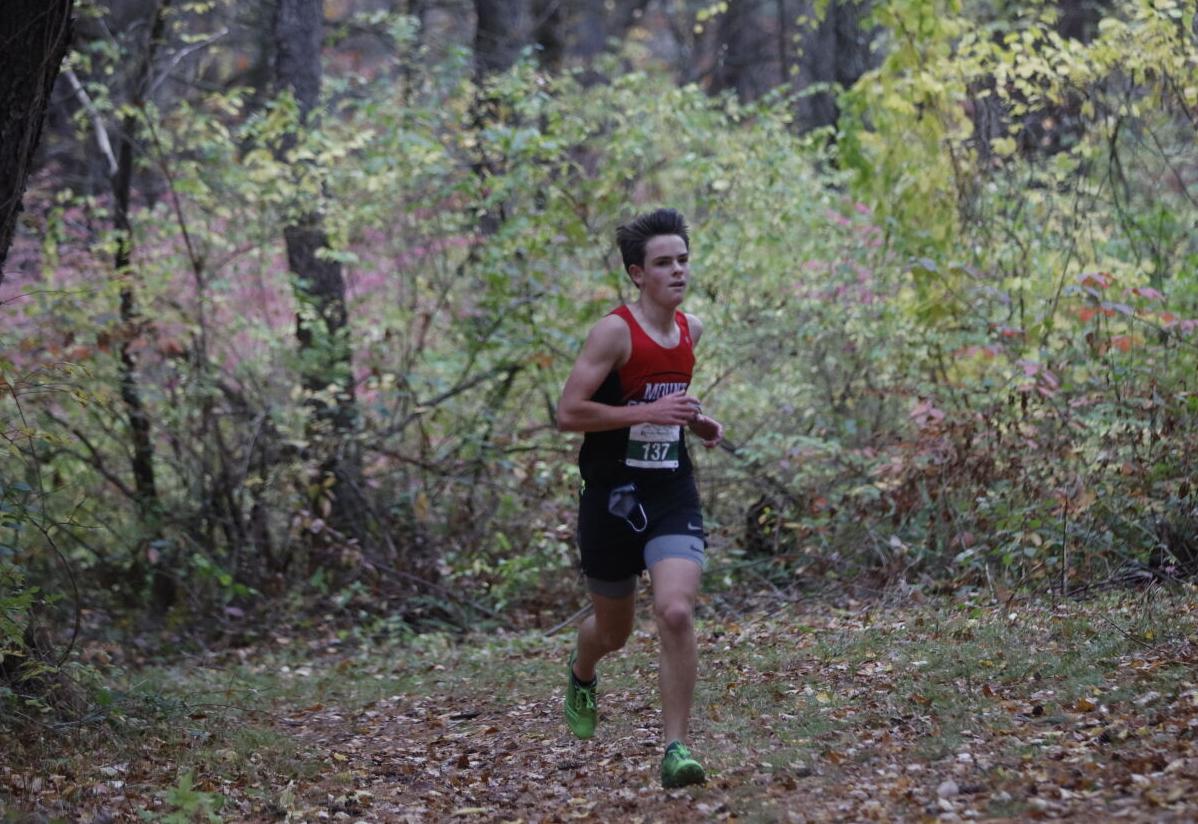 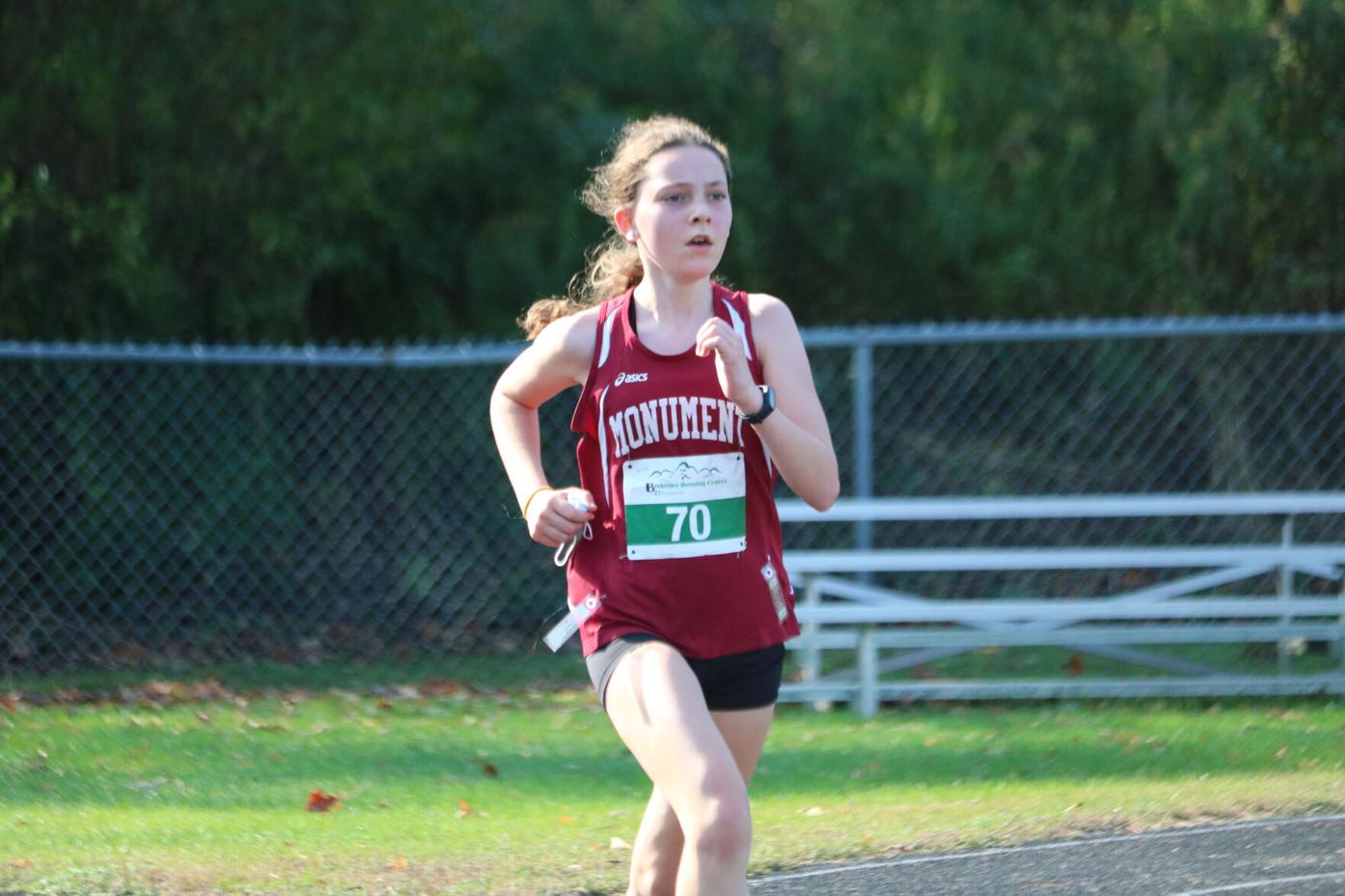 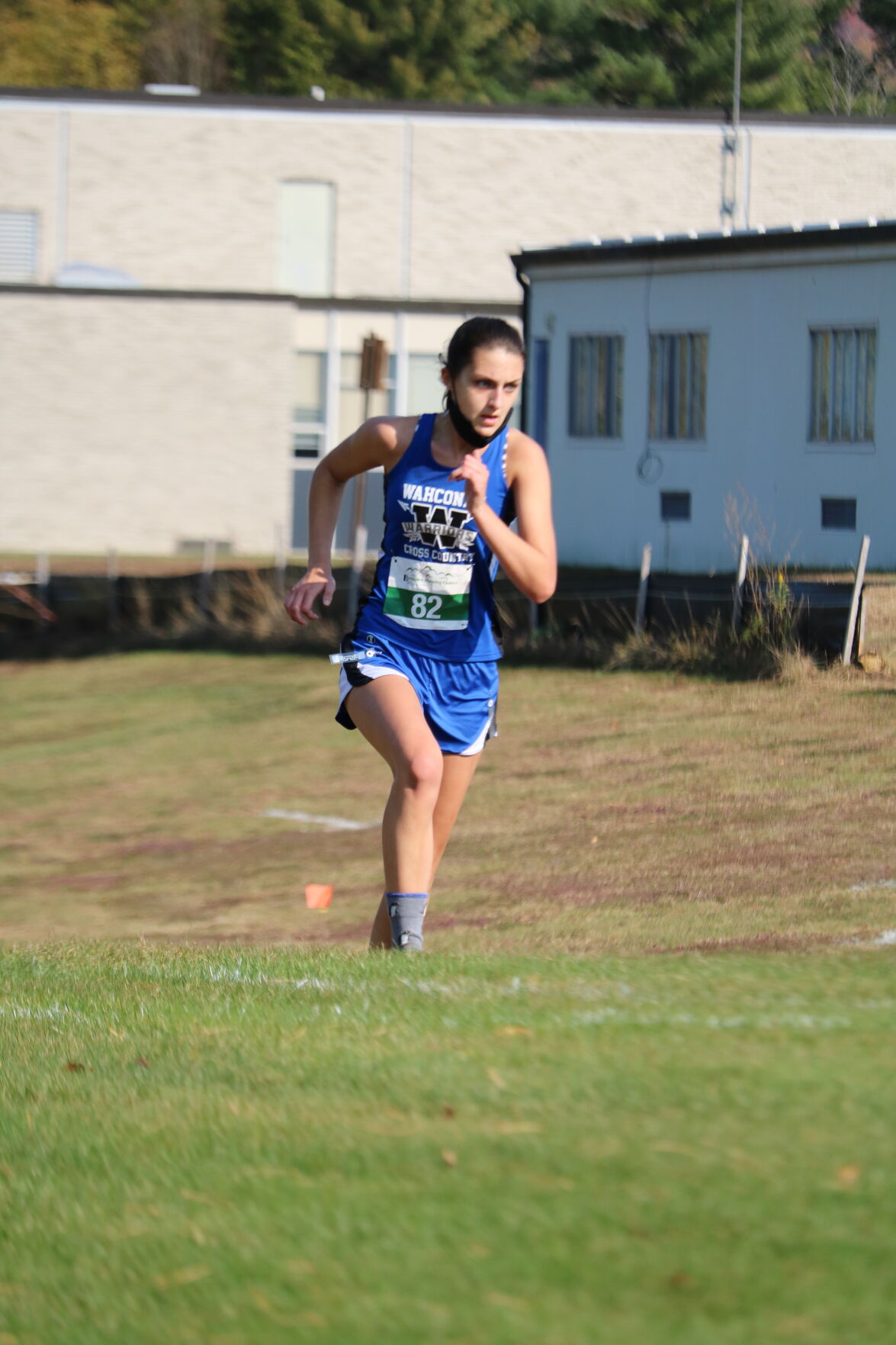 Wahconah senior Haley Crosier racked up another individual win on the course in Great Barrington on Saturday.

The Monument Mountain boys cross-country team, led by a podium sweep from Peter LaRochelle, Keegan Leach and Diego Salinetti picked up a home win over Wahconah on Saturday.

Wahconah senior Haley Crosier racked up another individual win on the course in Great Barrington on Saturday.

GREAT BARRINGTON — For the second consecutive week, it was a trio of Monument Mountain Spartans sweeping the podium spots in a boys cross-country race.

This time, they were joined by the girls squad in defending their home course with a total dual meet victory over visiting Wahconah. The boys won 19-36, while the girls sweated it out 28-32.

Peter LaRochelle picked up his second consecutive victory, conquering his local turf in 16 minutes, 48.54 seconds. The times were a smidge off the prior week’s marks, given a frigid morning in Great Barrington. However, LaRochelle’s pace of 5:24-per-mile was more than enough to get the job done.

Classmate Keegan Leach was four seconds behind in 16:52, with teammate Diego Salinetti besting Wahconah and the remaining field in 17:45 for third.

With a six-point head start, it was an uphill battle for the visiting Warriors, who scored fourth overall with Alex Perenick in 18:16. Myles Gennari came crashing through for the home side in fifth, though, and his 18:52 all but sealed it for the Spartans.

Wahconah carded Peyton Webb and Lucas Wildrick in sixth and seventh, respectively, before Andrew McCarthy polished off the win for Monument in eighth overall. The Warriors grabbed the following three spots, and had six of the top 11, but the damage was done.

On the girls side, it was Monument Mountain facing a climb back into the meet after four finishers were in.

Haley Crosier continued dominating in her senior campaign with another outright victory for Wahconah, crossing more than one minute ahead of the field in 20:47.77.

She was followed by the Spartans’ Eliza Phillip in a monster performance on Halloween morning. The runner-up spot was grabbed in 21:58, a 14-second improvement on the Great Barrington course over Phillip’s fifth-place finish a week prior against Mount Greylock.

Crosier’s side had follow-up, though, and Jocelyn Sommers and Quinn Walton — in fourth and fifth, respectively — had the visitors in front 8-13 after three finishers each.

Monument’s chain wasn’t finished there, though. Ruby Citron landed in the top five with a 23:48, and was followed in order by teammates Aria Grossman, Anna Marie Romano, Zoe Holmes, Evie Grossman and Paige Scott, before Kaitlyn Olds got Wahconah back on the board. That chain of Spartans, all finishing within 72 seconds of each other, forced the Warriors to finish scoring with an 11 and a 13 and resulted in a four-point Monument victory.

The Spartans visit Mount Everett to finish out the fall season on Saturday, while Wahconah prepares to wrap it up by hosting Mount Greylock.

WILLIAMSTOWN — The Mounties got to enjoy one more race in chilly north county on Saturday, and left campus with another pair of victories over Mount Everett.

It was a senior day win individually as well for Mount Greylock’s Charlie McWeeny, who laid down a 19-minute, 22.75-second performance to remember. McWeeny led a clean sweep for Greylock, which included fellow seniors Corban Miller in fourth, Michael Faulkner in sixth, Gabe Gerry in eighth and Finn Ellingwood in 17th.

Sophomore Ezra Holzapfel was second in 20:04, with freshmen Ryan Keating and Andrew Petropulos in third and fifth, respectively. Miller’s No. 4 slot came in 20:21.

Mount Everett was led by Benjamin Vella, a seventh-grader who finished 20th overall in 24:38.

The Greylock girls also celebrated a handful of decorated seniors, Jackie Wells chief among them. Wells placed second overall in 21:30, trailing only junior star Kate Swann who kept her perfect season alive with another individual first.

Swann and Wells were joined in the scoring five by underclassmen Grace Malone in third, Ainsley Abel fourth and Lily McDermott fifth. Fellow youngers Sarah Polumbo, Chase Hoey and Annie Art forced the issue to round out the top 10.

Mount Everett was led by junior Rochelle Worth in 30th in 32:42.