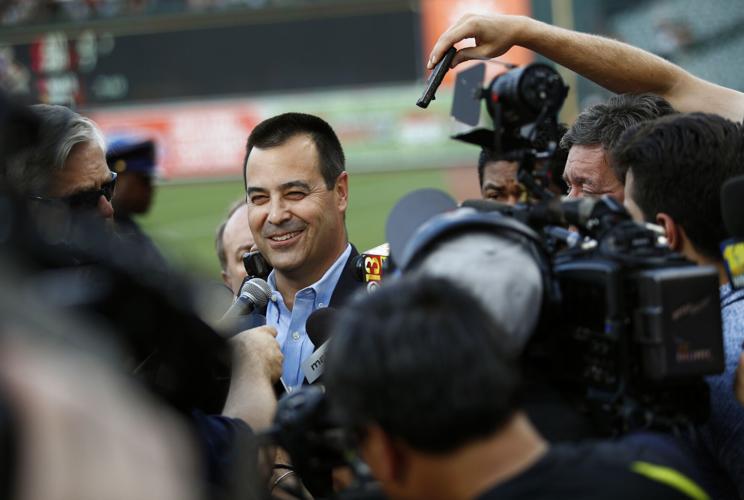 Dan Duquette, seen here talking to members of the Baltimore media from his time as Orioles executive vice president of baseball operations, was recognized on NESN Tuesday night as part of the most recent class of inductees into the Boston Red Sox Hall of Fame. 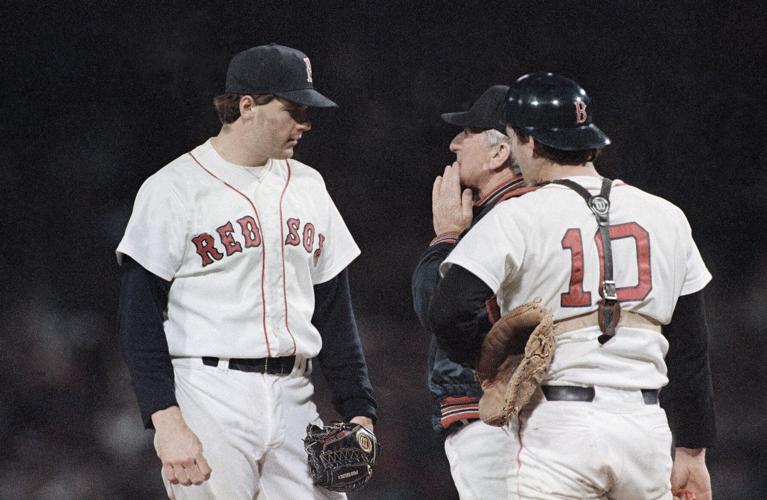 Red Sox catcher Rich Gedman, right, talks with pitcher Roger Clemens and manager John McNamara during a game in the 1986 American League Championship Series. Gedman is part of the five-person new group of inductees into the Red Sox Hall of Fame.

Dan Duquette, seen here talking to members of the Baltimore media from his time as Orioles executive vice president of baseball operations, was recognized on NESN Tuesday night as part of the most recent class of inductees into the Boston Red Sox Hall of Fame.

Red Sox catcher Rich Gedman, right, talks with pitcher Roger Clemens and manager John McNamara during a game in the 1986 American League Championship Series. Gedman is part of the five-person new group of inductees into the Red Sox Hall of Fame.

There was no Boston Red Sox Hall of Fame ceremony in 2020. That fact does not lessen the good feeling Dan Duquette has of being inducted.

“I had an opportunity to come to Fenway Park and every time I walked into my office, I had a smile on my face,” Duquette said. “This was my dream job. I had always aspired to be the general manager of the Red Sox when I was a kid, and help them win the World Championship.”

Duquette was one of five people affiliated with the Red Sox who are the latest inductees into the team’s Hall of Fame. The induction ceremonies were canceled because of the COVID-19 pandemic, but Duquette and the others were honored during a broadcast Tuesday night on NESN.

Duquette, who was the general manager of the Red Sox from 1994 until 2002, was inducted into the Red Sox Hal of Fame along with sluggers David Ortiz and Manny Ramirez, Worcester native Rich Gedman and old-timer Bill Dinneen.

This class of Hall of Famers will be celebrated at next year’s induction ceremonies. The Red Sox Hall of Fame Gala had been scheduled for April 30 before the pandemic forced the cancelation.

Duquette, a Dalton native, graduated from Wahconah Regional High School and Amherst College. He began his climb to the GM chair at Fenway by working for Springfield native, and Amherst grad Harry Dalton with the Milwaukee Brewers. Duquette later joined the Montreal Expos, working under another former Red Sox GM in Dave Dombrowski. When Dombrowski left the Expos in 1991, Duquette took over.

“I had a lot of assistant GMs,” Duquette said on the Hall of Fame television show. “It was a lot of fun to be able to share that with family, because it was important.”

Duquette’s hiring ended a three-month search for someone to replace Lou Gorman. At first, the Expos were reticent about allowing their general manager to interview in Boston. Eventually, Expos president Claude Brochu relented, Duquette interviewed and was hired.

“For every young New England kid who had the dream to grow up and work for the Red Sox, it’s a great opportunity for me,” Duquette said on the day he was hired. “One of the great things about this franchise is the passion of its fans, their knowledge of the game and the knowledge of the press. If people are interested and they have a passion for what they’re doing, they’re going to come to the ballpark.

“They might not like every move you make, but they have an understanding for the game, which makes it interesting — and a challenge.”

Duquette was the architect of three of the most lopsided personnel moves in team history. He signed knuckleball pitcher Tim Wakefield after Wakefield was released by Pittsburgh. He traded for Jason Varitek and Derek Lowe in a deal with Seattle for closer Heathcliff Slocumb. And Duquette sent prospects Carl Pavano and Tony Armas Jr. to Montreal in 1997 for Pedro Martinez. It was the second time Duquette had traded for Martinez, sending Delino DeShields from Montreal to Los Angeles for Martinez.

Those three deals, along with the free agent signings of Hall of Fame classmate Ramirez and also Johnny Damon, helped build the foundation for the 2004 World Series championship that was Boston’s first title since 1918.

Duquette is not the only Hall of Famer in this class who grew up rooting for the Red Sox.

Gedman, who grew up in Worcester and played his high school baseball at St. Peter Marian. He chose to sign as an undrafted free agent with Boston instead of playing college baseball at Connecticut. Gedman is the father of Matt Gedman, who has been the manager and a coach with the Pittsfield Suns of the Futures League.

Rich Gedman spent 13 years in the Major Leagues, 11 of them with Boston, one with Houston and two in St. Louis to wrap up his career.

Gedman caught the first of Roger Clemens’ 20-strikeout games during the 1986 season.

“There were a lot of people you’re going to leave out when you talk about this stuff, but everyone of them know you had something to do with a kid from Worcester having an opportunity to be a Red Sox Hall of Famer.”