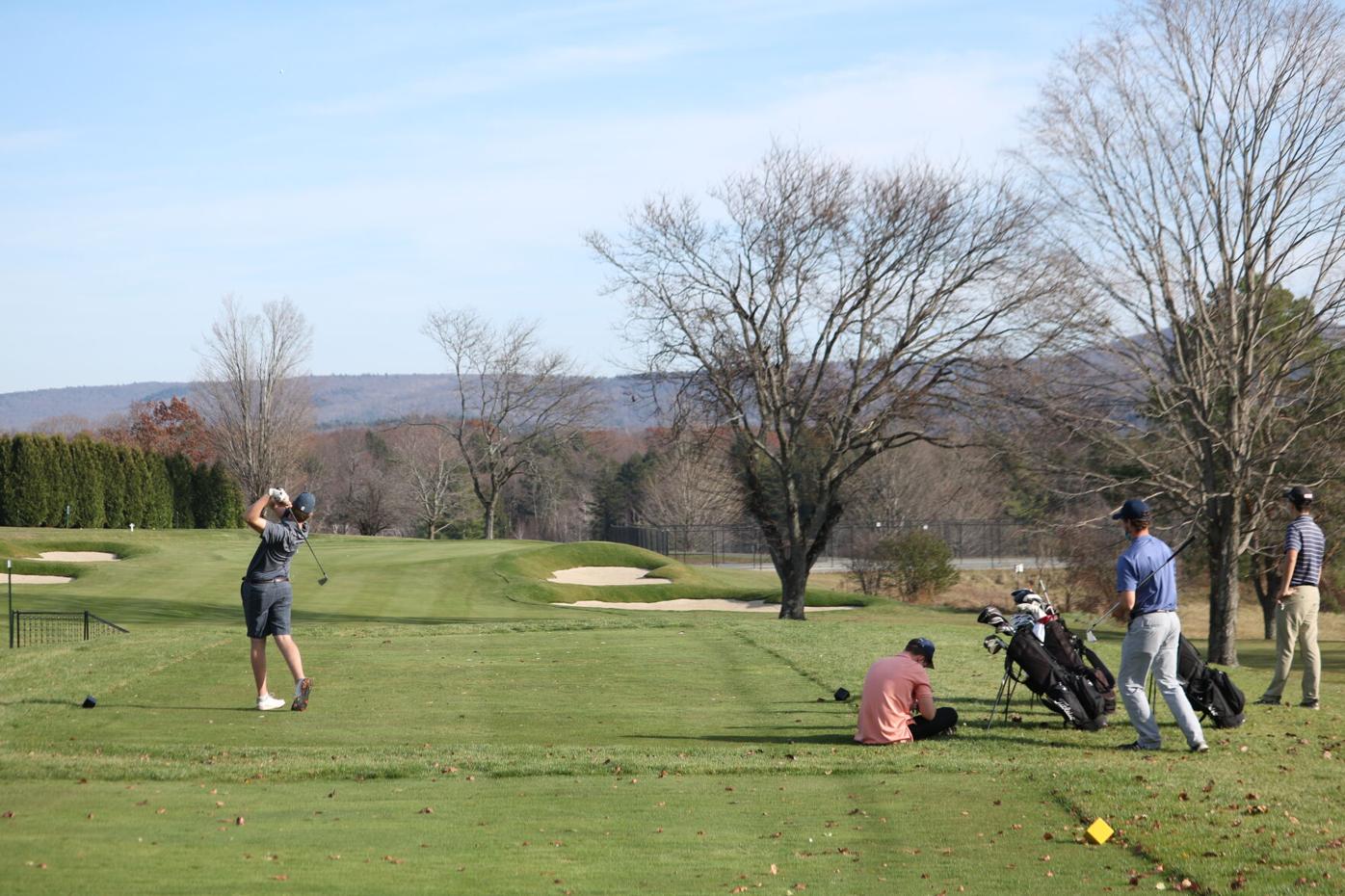 MIKE WALSH — THE BERKSHIRE EAGLE Nate Murphy and teammate Max DiGrigoli shot an even-par 71 to win the Halloween Junior Four Ball Tournament at the Country Club of Pittsfield on Saturday. 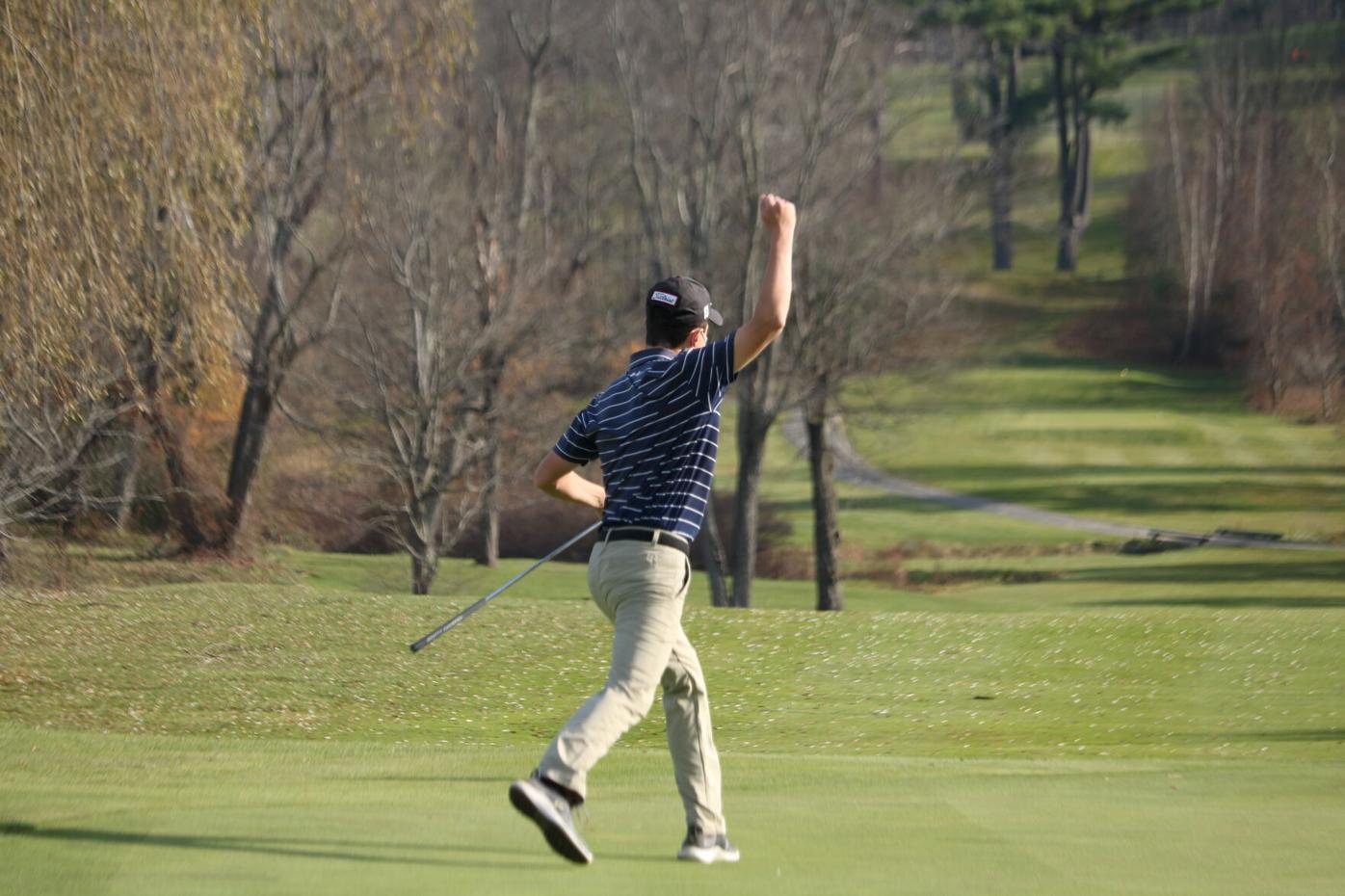 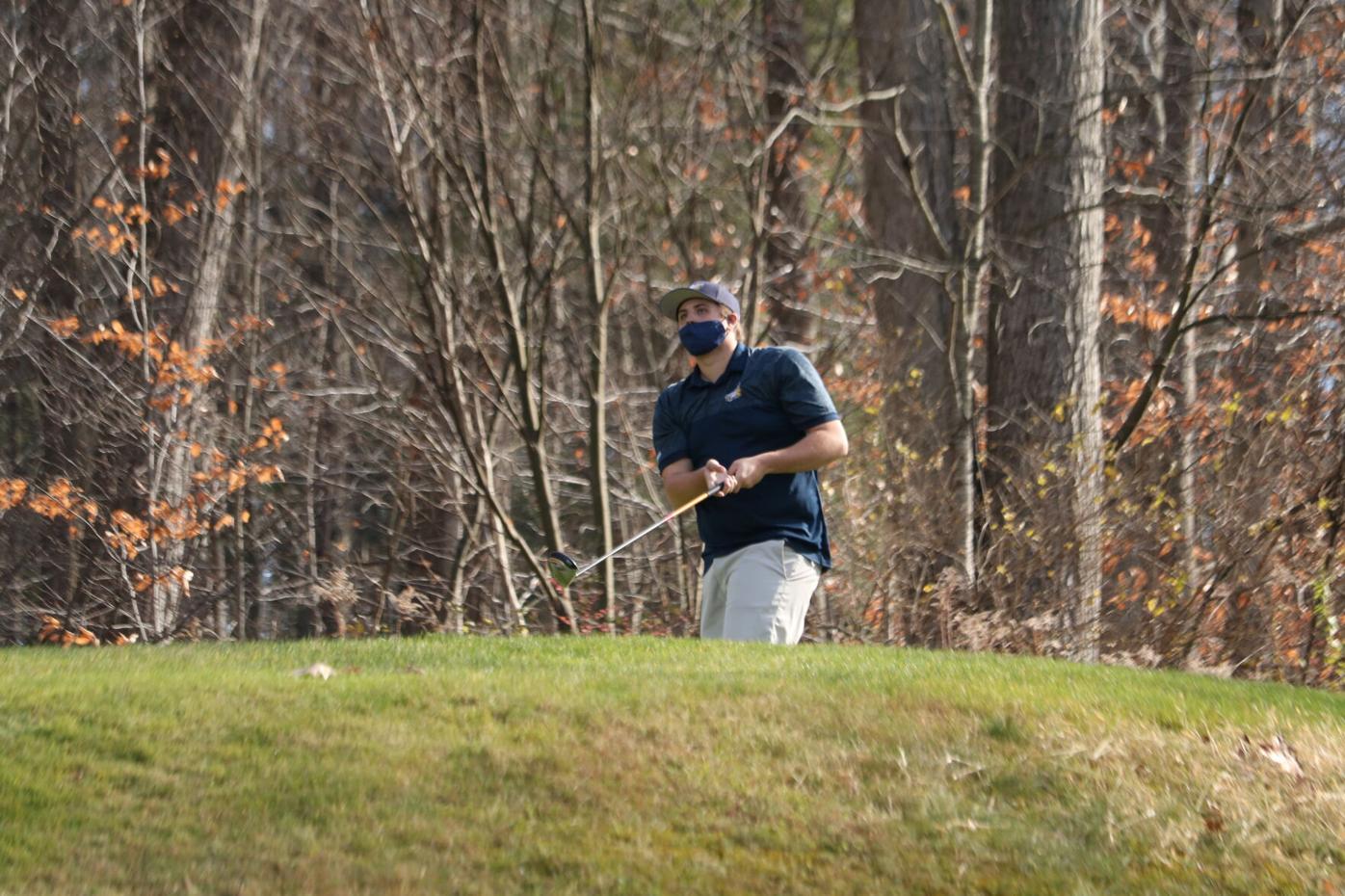 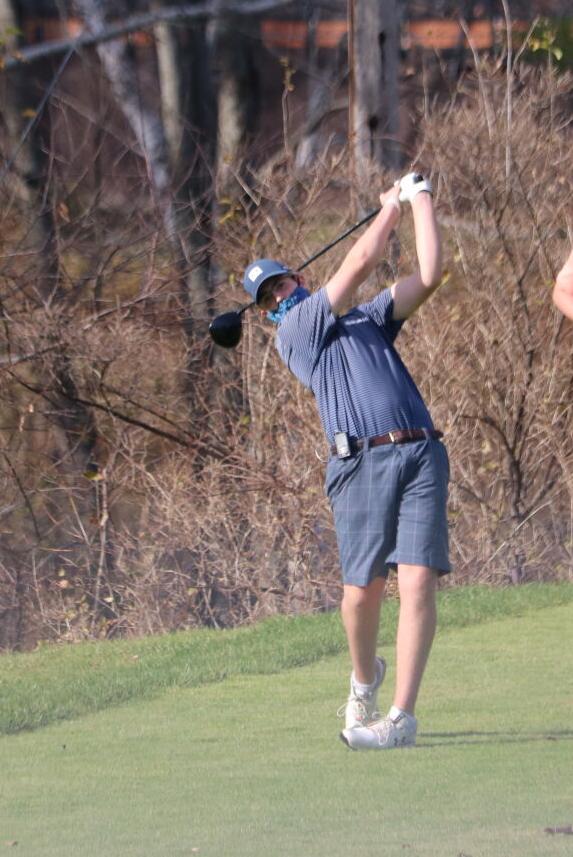 Nate Murphy tees off at the Country Club of Pittsfield on Saturday. 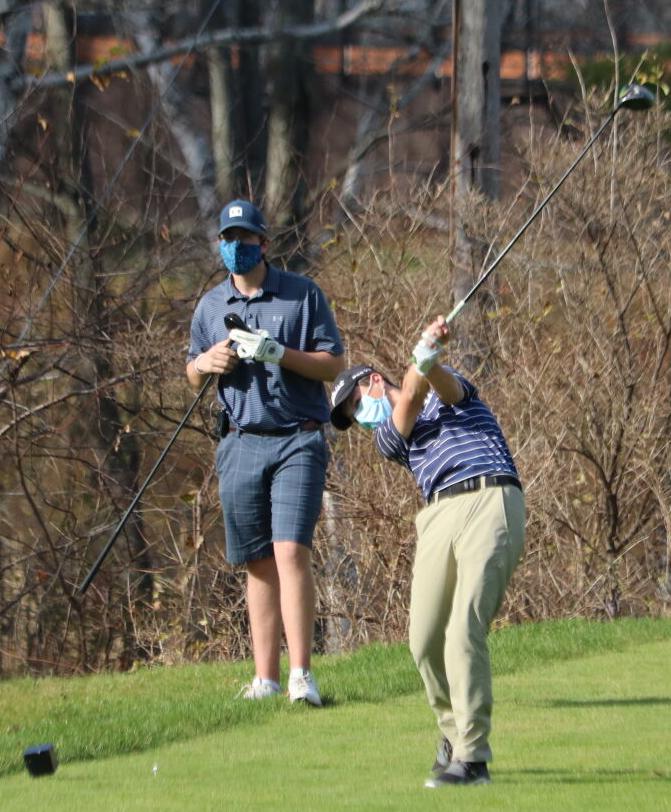 Max DiGrigoli and Nate Murphy teamed up to win the 16-18 division of the Halloween Junior Four Ball Tournament at the Country Club of Pittsfield on Saturday.

MIKE WALSH — THE BERKSHIRE EAGLE Nate Murphy and teammate Max DiGrigoli shot an even-par 71 to win the Halloween Junior Four Ball Tournament at the Country Club of Pittsfield on Saturday.

Nate Murphy tees off at the Country Club of Pittsfield on Saturday.

Max DiGrigoli and Nate Murphy teamed up to win the 16-18 division of the Halloween Junior Four Ball Tournament at the Country Club of Pittsfield on Saturday.

PITTSFIELD — While neither Taconic nor Lenox High Schools fielded golf teams this fall, juniors Nate Murphy and Max DiGrigoli were far from twiddling their putting thumbs all season long.

Capping off a long summer of playing in any and every tournament they could find from the Pioneer Valley to Albany, Murphy and DiGrigoli paired up on Saturday and took home first prize at the Country Club of Pittsfield’s Halloween Junior Four Ball Tournament.

The duo shot an even-par 71 to tie with Ethan Beauchemin and Mason Dumas, but were awarded first place do to a better score — 2-under — on the back nine. Beauchemin and Dumas shot even on their second half. The tournament was delayed from Oct. 31 due to weather.

“Just playing golf. I played in a lot of New York tournament, all around Berkshire County,” Murphy said of his season, despite not being able to play for Taconic. “I’m just glad they could get something together for the high school kids.”

DiGrigoli, a Lenox junior, added: “That’s the biggest thing, whether we’re playing in the snow or not, just having the ability to be out here and be competitive after our schools weren’t able to provide that.”

The two have known each other for about four years, and met playing on the local Allied tour. Murphy said when they first heard about the Four Ball at CCoP, they knew they were going to play together.

“Our games are pretty similar, we didn’t hit it the best we could’ve today, but it was enough to do pretty well,” said DiGrigoli. “I think we were both expecting to be around par, and we did that. Got off to a good start, parred the first five, then we had a tough hole on 6 when we both made double. In a tournament like this, that’s not ideal, you want to stagger your misses.”

Teamwork kicked in there, and DiGrigoli picked up a par-4 on the 400-yard seventh hole. He bogeyed the eighth, a 512-yard par-5, but Murphy was there to pick him up with the par putt to help finish the front-nine at 2-over 37.

Beauchemin, out of Palmer, and Dumas, out of Monson, held a steady par and 2-stroke lead through 13 holes. A birdie and bogey in succession still left them that lead onto the 16th tee box.

DiGrigoli kicked it up a notch from there, birdieing the 476-yard par-5 16th and 319-yard par-4 18th, while Murphy went bogey, par, par on his final three holes to draw back even at 71 with Beauchemin and Dumas. DiGrigoli only had three missteps on the day, and on both of his bogeys, Murphy managed a par.

The Mount Everett tandem of Cooper Rothvoss and Jack Seward-Dailey finished in a tie for third with a 4-over 75, along with Anthony Schabowski (Westfield) and David Tirrell (Agawam).

In the 12-15 age group, playing from the blue tees, Owen Goldberg and Ali Awkal played to a one-over 72 tie with Tim Kaley and Carter Drake. Lenox’s Devan Patel and Cliff Flynn were third with a 3-over 74.

In the 8-11 age group, playing nine holes from the green tees, the sister/brother pairing of Madelyn and Palmer Vetri, who are members at the club, took first with a 17-over 53. Playing the Four Ball without a partner, Jacob Hillman was second with a 55.

There were 30 birdies in the top age group, including a tournament-best three each by Rothvoss and Greenfield’s Ryan Cote. Rothvoss birdied the 12th, 15th and 16th holes. Cote was strong on 1, 4 and 11. DiGrigoli, Schabowski, Brad Danyluk, Justyn Cowell, Tony Facente, Max Shepardson, Brendan Hayden and Ben Sokolov each had two birdies.

All 72 players walked away from the free event with a Country Club of Pittsfield hat, golf balls, along with pizzas and bottled water.

“Great fun had by all and a big thank you to Ray Kushi for providing the Papa John’s pizza, Linda and Steve Supranwicz for the bottled water and the Country Club of Pittsfield for hosting,” wrote CCoP head professional Eric Mabee in an email. “These kids deserve more, but today was something we as a Club and staff could do for them. It was fun and we enjoyed having them.”

“We wanted to do something for the kids that lost their high school seasons due to Covid,” continued Mabee, who also noted he hopes to make this an annual event. “The kids were happy to be at the Club and we did put best to take care of them.”