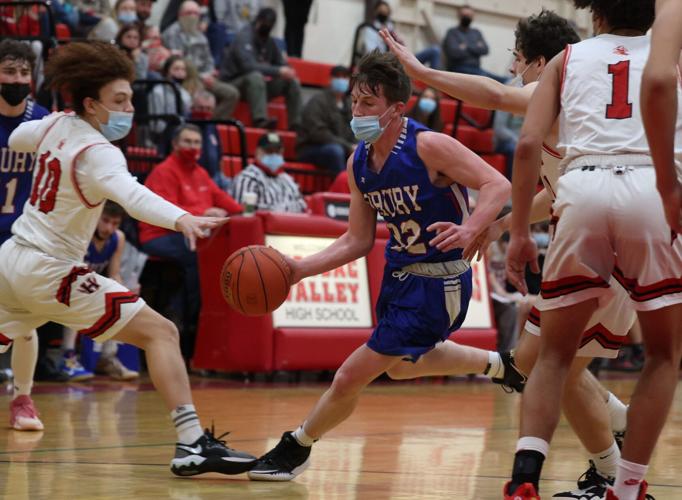 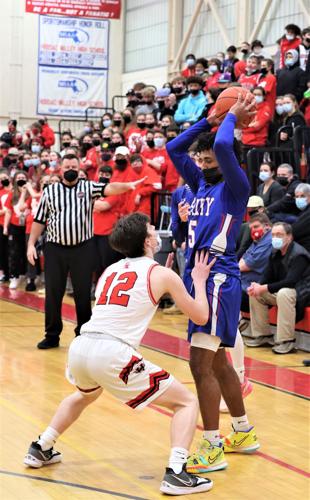 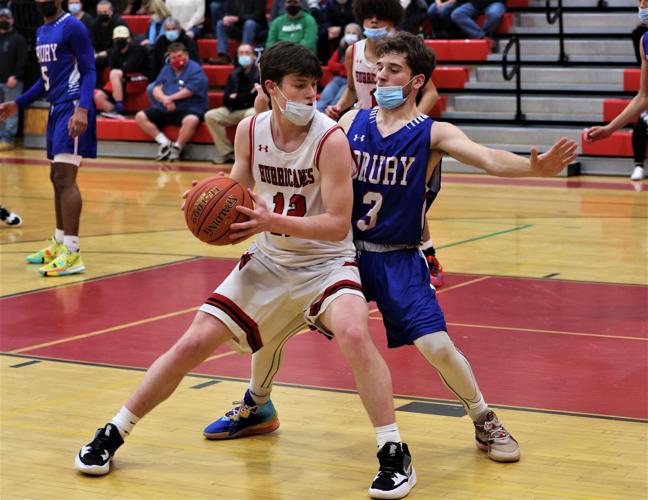 CHESHIRE — Drury coach Jack Racette wishes the Hurricanes were coming to Drury in a few weeks for rematch. Hoosac Valley coach Bill Robinson couldn’t think that far ahead, still scratching his head trying to figure out what just happened.

With no more Berkshire North league, the storied rivalry between the Blue Devils and Hurricanes boils down to a single regular season game. Drury is now in the Hampshire South, while Hoosac resides in the Bi-County East, but for one regular season evening, the old blood still boiled. 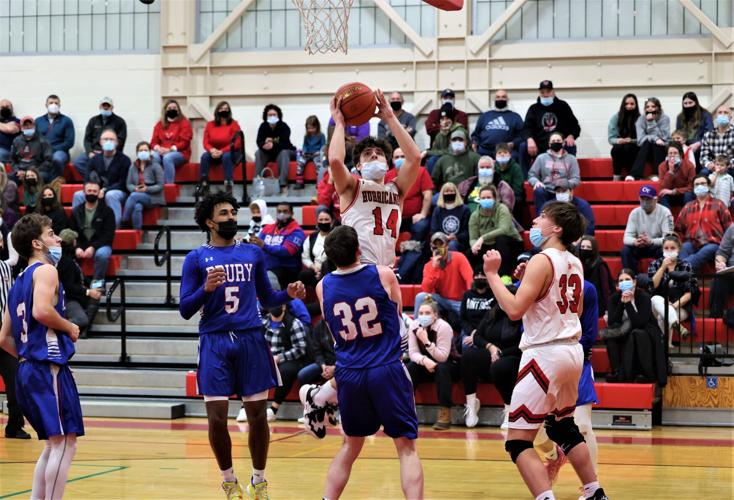 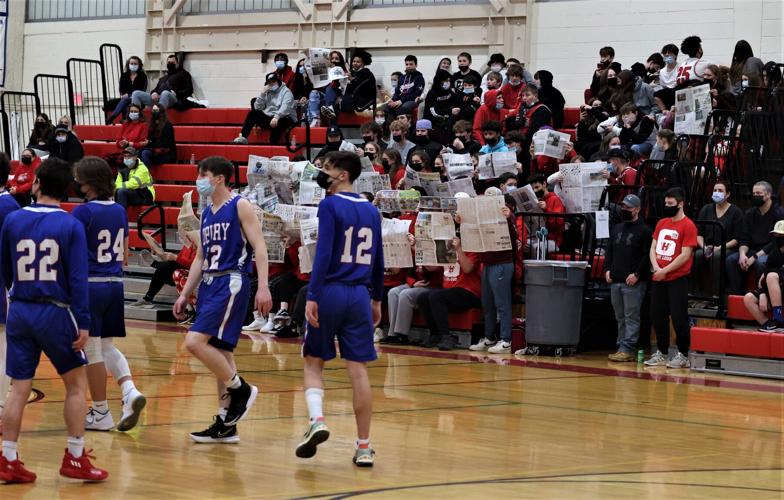 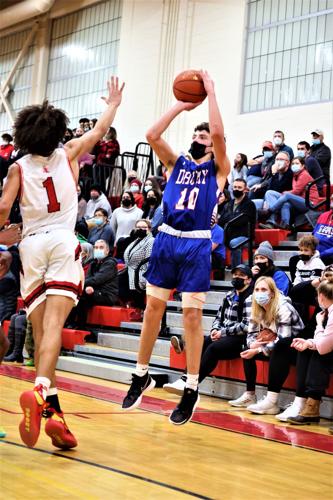 Drury's Ben Moulton knocked down two 3-pointers in the win over Hoosac Valley. 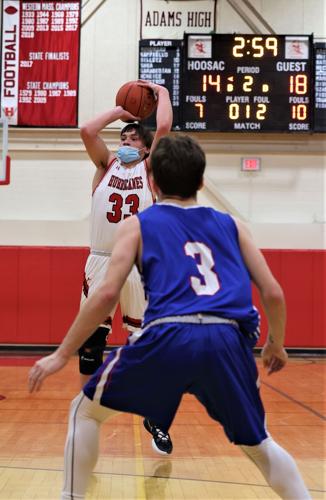 Frank Field puts up a 3-pointer for Hoosac Valley. 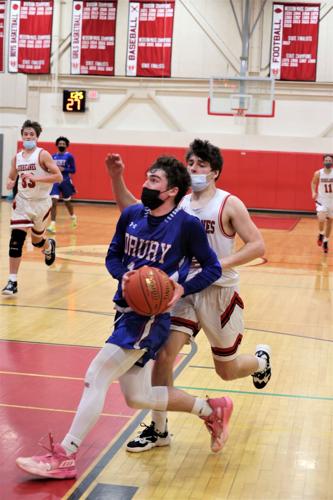 Drury's Zach Davignon finds an open lane to the basket on Saturday at Hoosac Valley.

On Saturday night in Cheshire, the Blue Devils had the right gameplan, beating Hoosac Valley 45-31 in a rivalry bout.

To view a complete gallery or purchase photos from this game, click here.

Drury's Ben Moulton knocked down two 3-pointers in the win over Hoosac Valley.

Frank Field puts up a 3-pointer for Hoosac Valley.

Drury's Zach Davignon finds an open lane to the basket on Saturday at Hoosac Valley.

“Ever since they switched our leagues, I wish they were coming to our place in three weeks. That’s what makes the rivalry,” Racette said after his team beat Hoosac 45-31. “You get one game, it’s fun, and good to win on the road because normally you don’t win down here. We’ll enjoy this one tonight, then it’s on to the next day.”

Drury’s defense took a Hoosac offense that was averaging 66.7 points per game and throttled it, ending what was a four-game win streak. The Blue Devils held their hosts to less than half that on Saturday night in the Hurricanes’ own gym.

“It is what it is, one game. Maybe we’ll see them again in the state tournament if we make it, who knows,” said Robinson. “We lost our heads, and they’ll face that tomorrow at practice. That’s not what we’re about.”

The added wrinkle to the rivalry bout was front and center from the starting lineup introductions. The Hoosac student section held up newspapers as a Drury starting five was introduced that included a familiar name in senior guard Logan Davis. Davis played two seasons for the Hurricanes before transferring to Drury.

When Ben Moulton found him inside for an and-one layup a minute into the game — Davis’ only three points on the night — a tone was set.

“We talked about it before the game. Logan Davis is a Drury basketball player,” said Racette. “That’s all he is. We didn’t put a lot of eggs in that basket. We just talked about coming down here and defending, doing the job that we needed to do with [Frank] Field and [Carson] Meczywor. Make other people hurt us.”

Field and Meczywor both entered the night averaging over 20 points per game. Field fouled out in the fourth quarter with 10 points, while Meczywor’s total stood at 11 at the final horn.

Drury led 5-0 early, as the Hurricanes missed their first six shots, five coming from 3-point land. It was a harbinger of bad things to come for the home side. Davis took two charges down the finishing stretch of the first quarter, and the visitors led 15-7 at the break.

“He’s a Blue Devil now. Doesn’t matter where you come from,” Drury’s Louis Guillotte — who scored half his team’s first-half points and finished with a game-high 16 — said of Davis. “When you’re a Drury basketball player, that’s the way you play.”

Hoosac cut into that lead by a point over the next eight minutes, but while Field’s 3-ball to beat the shot clock with 3 minutes to go cut the deficit to 18-17, it was also the last ‘Canes bucket for quite a while. A 6-0 run by Drury meant a 24-17 halftime lead, and Hoosac didn’t warm back up in the locker room.

Moulton (12 points) hit a jumper and two foul shots early in the third to push the lead to double digits. With 2:20 on the clock, reserve guard Mikey White picked a pocket and went the other way for a Hoosac layup that finally got the home scoreboard to change. That, however, was it for third-quarter scoring for either team. A not-so-pretty 4-2 quarter meant a nine-point advantage for the visitors entering the final frame.

The Hurricanes were hunting for any kind of rhythm or momentum to ignite their home crowd. Meczywor scored six of his 11 points in the final eight minutes, and he opened the fourth with a quick layup. Guillotte answered right away with a jumper, though, and then Field picked up his fourth foul. With 6 minutes left, Guillotte handed off in the corner to Moulton, who canned a triple for the 33-21 edge.

“It is a big deal,” said Guillotte of the atmosphere in the gym Saturday night. “We talk about where we want to be at the end of the year, and when you’re playing at the Mullins Center or The Cage, it’s going to be even louder. You’ve got to get used to it, so we can use this.”

Meczywor assisted on a Luke Waterman bucket and then scored himself to force a timeout with 2:58 left and the Hurricanes trailing 35-27. He then took a charge and the home defense forced a 10-second violation, but Hoosac couldn’t capitalize on either opportunity. With time growing short, Meczywor stole an inbounds pass and scored to get within six. However, Shaun Kastner fouled Zach Davignon on a rebound and Davignon hit both ends of the 1-and-1.

Meczywor and Kastner connected for a quick two in response, but another foul mucked up the comeback bid. Field picked up his fifth personal, bumping Davignon near halfcourt with 75 seconds left. Davignon hit both freebies again — and went 5 of 6 down the finishing stretch.

“Our weakside help was excellent all game. Zach does a great job defensively and plays hard,” said Racette. “And [those free throws came] after playing 32 minutes of all-out basketball.”

By the time Guillotte sank a pair to make it 43-31, the game was all but complete. The Hurricanes couldn’t get a point on the board over the final 90 seconds of action.

“It was all Drury. Drury’s man-to-man pressure just bothered us all night. We didn’t get into any sets at all,” said Robinson, whose team dropped to 6-2. “Our shots were terrible. Drury really pressured us into our heads. They played a hell of a lot better than we did. They were a lot better defensively. They were the better team.”

The Blue Devils were without senior center Tim Brazeau, but still owned the boards on Saturday, with Moulton and Guillotte stepping up to fill the void and help Drury improve to 8-2.

“He’s gotten bigger, he’s got big strong hands,” Racette said of Moulton in particular. “Sometimes they take it for granted that when Timmy is in there he’s going to out-muscle everybody for the rebound. When he’s not around, Ben, Louis, everybody, we needed a concerted five-man effort on the boards tonight. It was very important and it showed tonight. That’s the discipline you’ve got to have.”