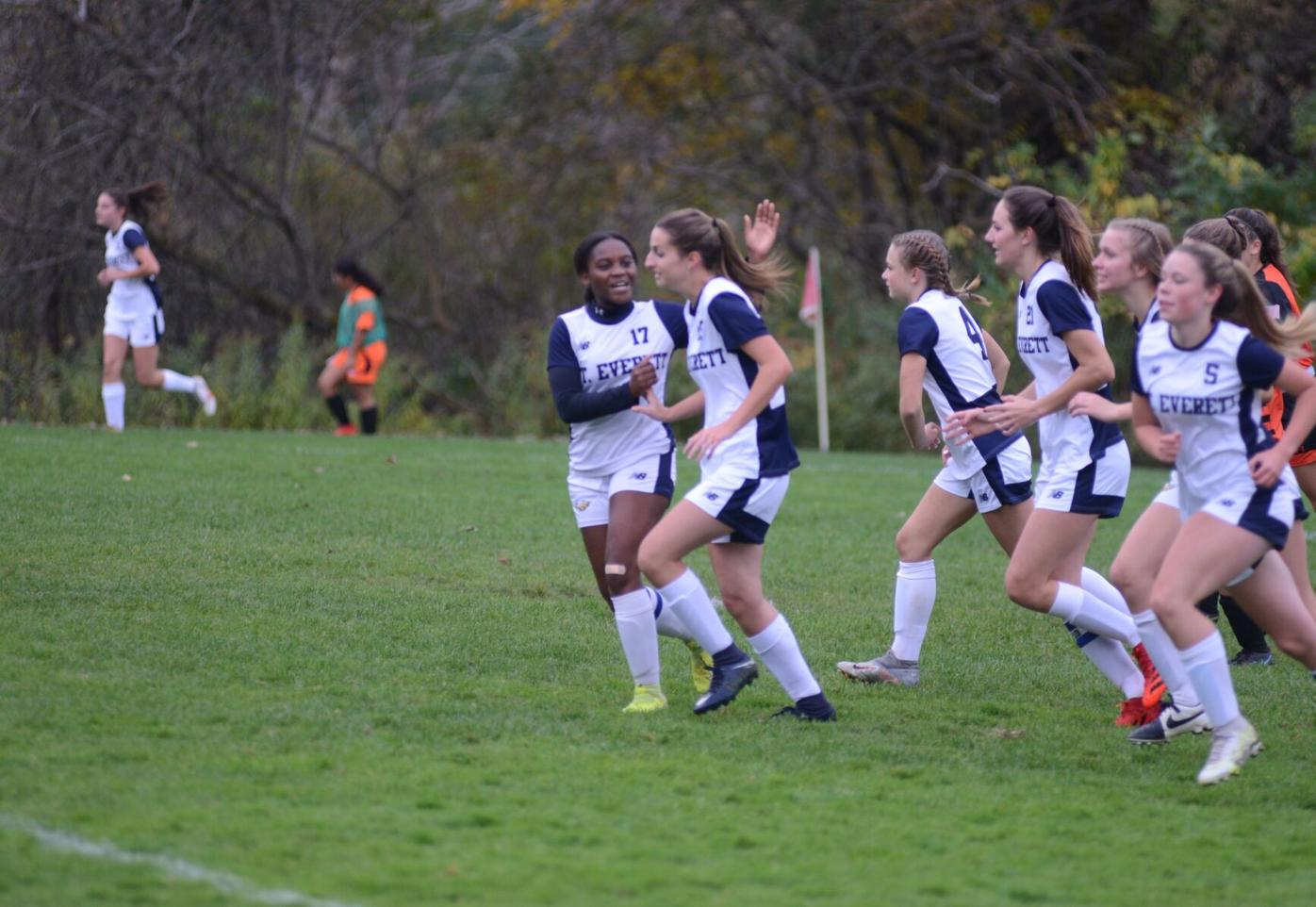 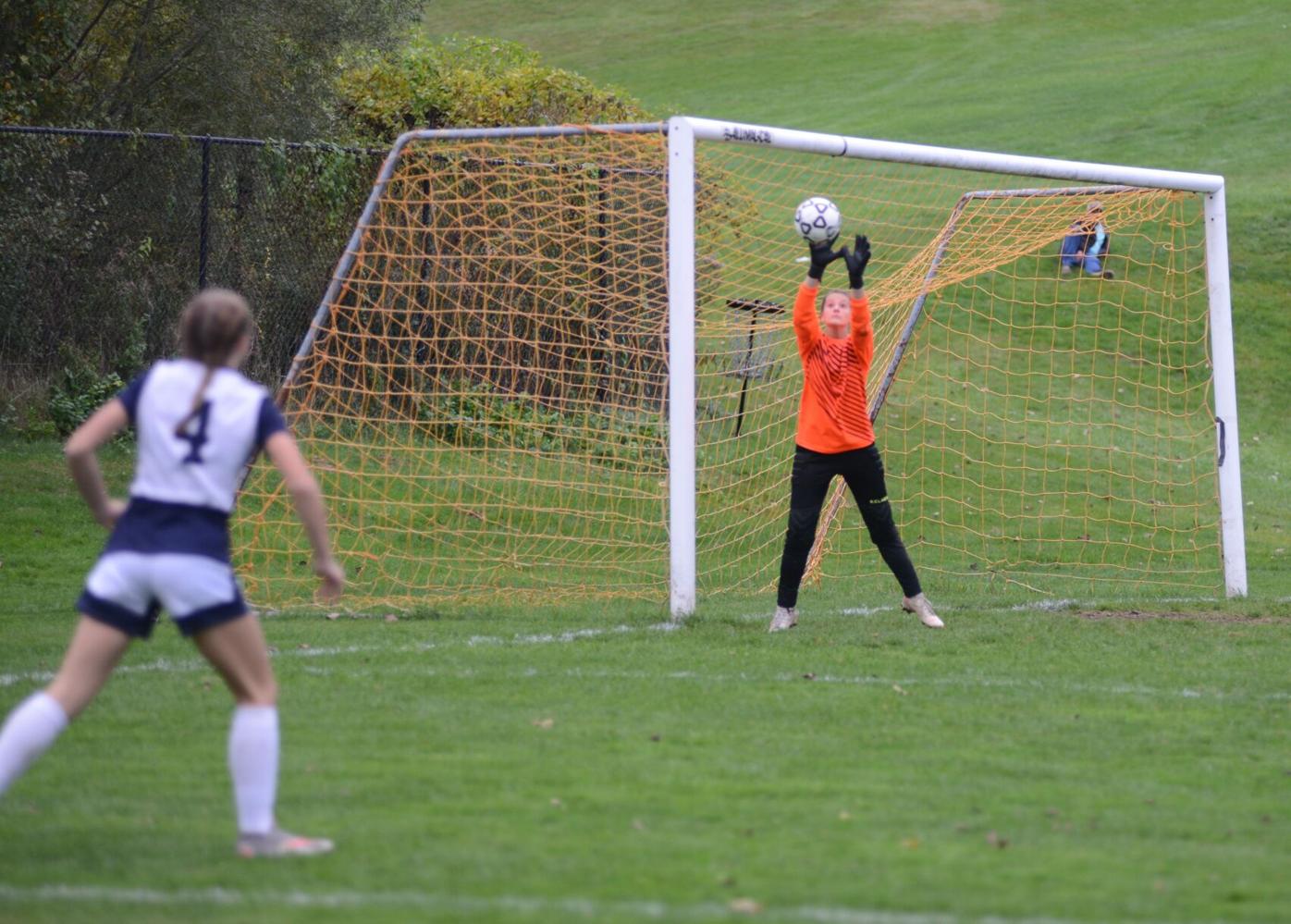 LEE — The theory of time and space is a complex topic.

On the pitch, though, the Mount Everett girls showcased a firm understanding of the concept in a 5-0 win over the Wildcats on Wednesday afternoon.

“We’re getting better at relaxing instead of just kicking the ball when we get it,” senior Mariah Broderick said after the win. “We’ve improved a lot this season. We’re keeping the ball with us until we have an open pass.”

Crisp passing paired with the likes of Ella Gennari, May Liebenow, Hudah Ngoy Nkulu and Chevelle Raifstanger streaking down the sidelines proved to be a lethal combination early in action.

The Eagle offensive forced a corner kick in the fifth minute. Emily Steuernagle punted a ball that wiggled through a crowd in front of Lee’s net before landing in front of Allison Steuernagle, who punched it in for the game’s first goal.

Emily Steuernagle refused to settle with one assist, pushing the ball up to Ngoy Nkulu roughly 10 minutes later. The senior broke inside the box and created space with a quick move to make the score 2-0.

“It’s one of those things we talk a lot about in practice,” Mount Everett coach Josh King said. “They realize how important ball control is. When you face those better teams it comes down to who can possess the ball and create more opportunities.”

Bella Lovato kept busy in the Lee net with eight saves in the first half and finished with 15. Offensively, Caroline Maloney tried everything in an attempt to break the Mount Everett defense.

“We have a solid defense that is good at getting to the ball first,” Broderick said.

Maloney’s speed was the key to creating shots. She broke down the field and sent two one-timers in front of the net but the Eagles blocked the call to action. The Wildcat captain broke past a diving Emma Goewey inside the Mount Everett box but Julia Devoti swooped in and picked her pocket before she could finish the play with 20 minutes left in the first half.

Allison Steurnagle fired a shot that pinballed off a player before plunging into the net for her second goal of the first half. Emily Steuernagle launched a moonshot from outside the box that drifted into the Lee net as Mount Everett took a 4-0 lead into the break.

“We practice the deep shots just so they can get comfortable shooting from different areas,” King said. “Once they learn that they can score outside the 18, it is just another tool they can lean on.”

After crashing in for the game’s first three goals, Chevelle Raifstanger chose to copy Emily Steurnagle’s lead with a deep attempt that dropped into the net. Mount Everett maintained the lead over the final 34 minutes with the likes of Broderick and Emma Wilson mucking things up around midfield.

“Honestly, we’re just working as hard as we can,” Broderick said. “We’re moving the ball and putting passes together.”

Wednesday marked the fourth-straight win and second-straight shutout for the Eagles (9-3). Mount Everett is back at home on Friday for a match against Pioneer. The Lee (4-7) girls are slated to make a trip to Huntington to play Gateway on Friday.